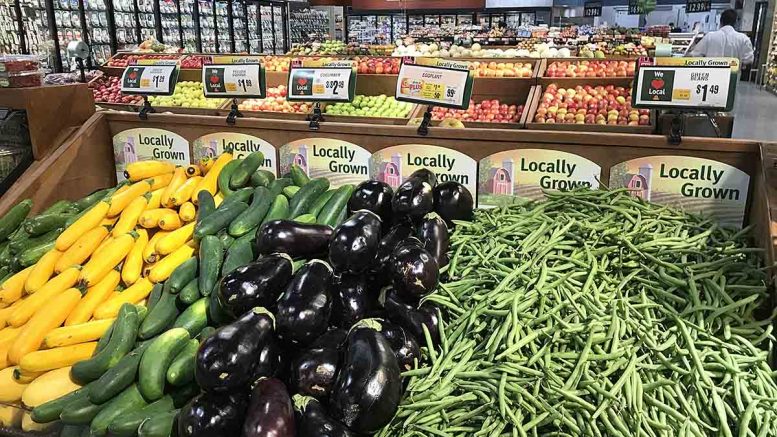 Garden State producers can reach more than $1 trillion in buying power — and quickly.

Benjamin Franklin once described New Jersey as ‘a keg tapped at both ends.’ The Founding Fathers’ statement referred to the Garden State’s 80-mile waist, which connected by land the ports of New York and Philadelphia. This horse-path turned superhighway route remains a main artery that delivers more than 100 varieties of Jersey-grown fruits, vegetables and herbs to nearly nine million of the state’s residents.

This distribution includes an additional 10 million consumers from these two major port cities, and soars to more than 52 million people in the Northeast megalopolis, an area that spans from Washington, DC, to Boston. Fresh-picked Garden State produce is an overnight delivery from one-sixth of the U.S. population. That’s Jersey Fresh.

“We have logistical advantages that truly set us apart, since no matter where you are in New Jersey, you can reach more than $1 trillion in buying power with a single tank of gasoline,” says Douglas Fisher, secretary of agriculture for the Trenton, NJ-based New Jersey Department of Agriculture, which launched the state’s landmark Jersey Fresh agricultural branding program in 1984. “This is reflected by the diversity of produce distribution channels that exist across the state. From major international distributors, regional co-ops, produce auctions and a network of community farm markets across the state, there is a venue for buyers looking to incorporate Jersey Fresh into their sales and promotional program.”

New Jersey is also a regional hub for storage and delivery, boasting a network of cold storage and distribution facilities designed specifically to cater to the major markets that the state’s producers operate within, notes Fisher. 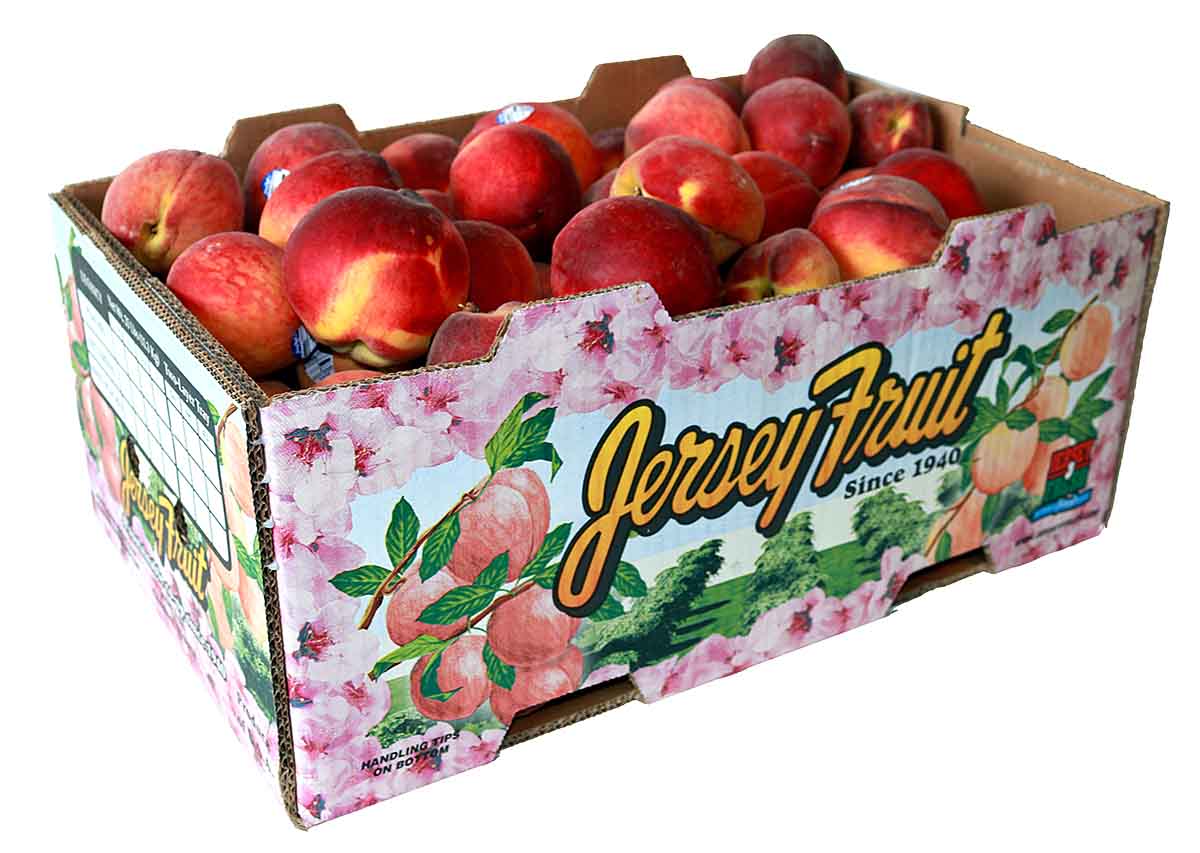 New Jersey ranks 47th in size and 11th in population, according to U.S. Census Bureau data, making it the most densely populated state. Despite that, farmland increased 2.7 percent from 2012 to 2017, to a little more than 734,000 acres, and the number of farms jumped nearly 9% in the same timeframe, to nearly 9,900. Most (81 percent) of these are family or individually owned farms, many multigenerational, with 45 percent boasting 10 to 49 acres.

“In the southern part of the state, there is a lot of open farmland,” says Bill Nardelli, Jr., vice president of sales at Cedarville, NJ-located Nardelli Bros., Inc. – Lake View Farms. The Nardelli family has farmed this land since 1898, and currently ships its produce via a recently expanded transportation fleet to supermarkets, foodservice companies, food processors and wholesalers East of the Mississippi as well as in Eastern Canada.

The land is integral to New Jersey being the Garden State.

“The outer coastal soil and climate are excellent for farming, which allows for flavorful produce,” says Carol DeFoor, office manager at the Vineland Cooperative Produce Auction, in Vineland, NJ. The auction, founded in 1931, is one of the largest of its kind on the East Coast. It operates from mid-April through November and plays a key role in getting Jersey-grown fruits and vegetables from field to market. More than 150 growers who collectively farm more than 25,000 acres primarily in Southern New Jersey participate in the six-day-a-week sale. Since 2002, a state-of-the-art electronic auction clock replaced a live auctioneer. Each transaction takes an average of 20 seconds per lot.

One-hour west of southern New Jersey, across the Delaware River, the 21 vendors at the Philadelphia Wholesale Produce Market (PWPM), distribute a significant amount of Jersey-grown produce in season.

“[The PWPM] does a good job, in both restaurant and retail,” says Nardelli.

At every step, food safety is an integral part of farm operations. “We maintain strict standards with sufficient breaks, potable facilities and the guarantee of gloves and hair nets, and the beginning of our blockchain from field to customer,” says Frankie Dandrea, president of Dandrea Produce, LLC, in Vineland, NJ. 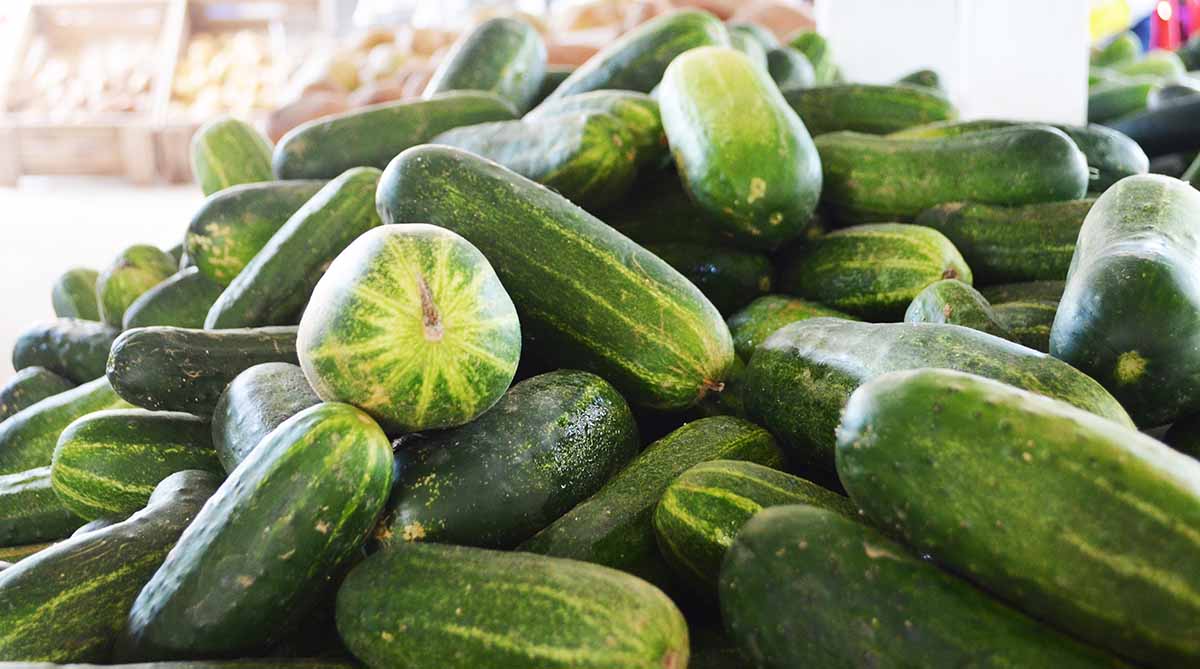 New Jersey ranks nationally as a top-10 producer of crops such as blueberries, peaches, bell peppers, squash and tomatoes. However, beyond these big-ticket items, another unique feature of the state’s agricultural landscape is the diversity of fruits and vegetables harvested.

“We grow more than 80 crops throughout the season with more than 200 pack styles,” says Nardelli.

Another plus is the relatively long six-month season. “We ensure that we are kept abreast of all New Jersey crops and when harvesting will begin each season,” says Kelly Davis, director of produce and floral for Iselin, NJ-headquartered Allegiance Retail Services LLC, which provides marketing, advertising and merchandising support to independent supermarkets under banners such as Foodtown, D’Agostino and LaBella Marketplace. “We will start promoting those items as soon as the season begins, usually around mid-May and continue on until November. The list of New Jersey produce items we carry is extensive and includes blueberries, peaches, asparagus, sweet corn, leaf lettuces, all cabbage varieties, cooking greens, wet veg, radishes and scallions.”

BERRIES. Blueberries are New Jersey’s No. 1 crop in terms of production value. The birthplace of the Highbush Blueberry in the early 1900s is Whitesbog, NJ.

“The major varieties grown in New Jersey are Duke, Bluecrop, Draper and Elliott,” says Art Galletta, president of the Atlantic Blueberry Co., in Hammonton, NJ. “The state is expecting a good crop this year, probably in the 45- to 55-million-pound range, with great promotional opportunities.”

The state has a 3- to 4-week strawberry season that typically begins mid-to-late May.

“We sell the Jersey strawberries by the quart for $7.99 to $8.99,” says Mike Oliver, produce manager at Pennington Quality Market, a single-store independent located in Pennington, NJ. “They fly off the shelf.”

PEACHES. As of early May, New Jersey farmers expect a full crop of peaches, which start harvest the first of July and run through the end of September.

“There are many different varieties of peaches, each with different characteristics, but all have a great unique flavor,” says Robert Von Rohr, director of marketing for Glassboro, NJ-based Sunny Valley International, which markets stone fruit packed under the Jersey Fresh and Just Picked labels. “Some of the best-eating varieties may have a color mix of red and yellow. Our grower works with Rutgers University to keep updated with new varieties to plant.”

TOMATOES. The Jersey-grown tomato is famous for its flavor, thus it is No. 1 in New Jersey in terms of production poundage. Tomatoes are a signature item for Procacci Brothers Sales Corp., a Philadelphia-based company that is one of North America’s largest tomato distributors and the exclusive distributor for proprietary varieties such as Santa Sweets grape tomatoes and UglyRipe heirloom-type tomatoes. “We’re not the first to have a high tunnel program, but we are the first to use diffusion plastic and will add this to 25 acres in New Jersey this year,” says JM Procacci, chief executive. “This technology will enable us to plant 3 to 4 weeks earlier and produce longer.”

This technology increases the amount of diffused light reaching the tomato plants, while decreasing the risk of scorching. Research shows diffusion properties in high tunnel plastics can also naturally lessen the risk for pests such as insects and fungus.

VEGETABLES. Bell peppers and cucumbers are the highest-volume veggies grown by Eastern Fresh Growers, a Cedarville, NJ, farm operated by generations of the same family since the late 1600s. “We plan to have more sweet corn than last year,” says Thomas Sheppard, president. “Last year was our first. We produced a good crop and are now devoting more acreage to it.”

ETHNIC PRODUCE. New Jersey is among the most ethnically diverse states in the country. As a result, growers have responded by adjusting their crop planning to provide the specific fruits and vegetables necessary to appeal to the ever-changing marketplace.

“Peppers like cubanelles, jalapeños and long hots are something we’ve grown for some time,” says Joe Rosa, vice president of sales and purchasing for The Fresh Wave/Consalo Family Farms, in Vineland, NJ.

Baby Bok choy, bok choy, cilantro, kohlrabi and poblano peppers are some of the crop diversity that is sold in the Vineland Auction, says DeFoor. “Methi (also called fenugreek) crops have doubled over the past few years.”

New Jersey farmers have a strong commitment to innovation, according to the NJDA’s Secretary of Agriculture, Fisher. “Growers are constantly evaluating new varieties and crops to ensure they are meeting the expectations of buyers and consumers.”

This state-of-the-art stance extends to growing methods such as organics and protected agriculture. The number of farms growing organically increased from 72 to 102 between the years 2012 and 2017, an interval that saw the value of organic production increase more than 200 percent to $127.6 million, according to the April 2019-published 2017 Census of Agriculture New Jersey, by the USDA’s NASS. Tomatoes, peppers, cucumbers, squash, lettuce, eggplant and sweet corn are a few of the organic crops. Produce grown under glass has grown from 67 farms in 2012 to 124 farms in 2017. Tomatoes, lettuces and fresh herbs are top greenhouse crops.

“One way we offer shoppers a local product, such as greens and bagged salads that are available year-round and are incredibly fresh, is through strategic partnerships with vertically integrated local farmers who produce using hydroponics, aquaponics or other techniques,” says Derrick Jenkins, vice president of produce and floral for the Keasbey, NJ-headquartered Wakefern Food Corp, the largest retailer-owned cooperative in the United States with 50 members that operate more than 350 stores under banners such as The Fresh Grocer, Price Rite Marketplace and ShopRite. “These products are a very sustainable, environmentally friendly way of farming. We think this is the way of the future.”

Curbing food waste is the objective of Farmers Against Hunger, one of three key programs headed up by the Bordentown, NJ-headquartered New Jersey Agricultural Society, which was formed in 1781, with the mission of preserving and enhancing agriculture, farming and related activities in the state. The Farmers Against Hunger program was started in 1996.

“We moved more than 1.5 million pounds of food last year to food banks, churches and other organizations that feed the hungry,” says Al Murray, executive director, who served as the NJDA’s assistant secretary for more than 30 years. “This came primarily from more than 80 New Jersey farmers, wholesalers and retailers. We even get donations from the Philadelphia Produce Market. It’s all part of maximizing the role agriculture plays in the state.” 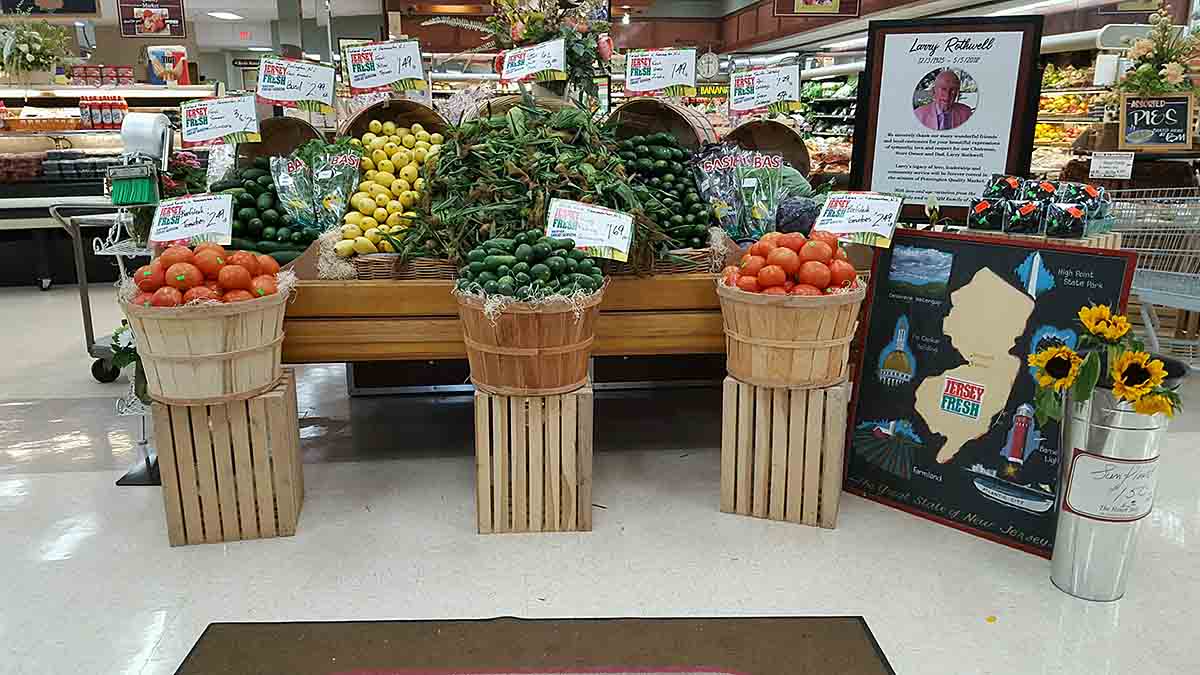 LOCAL IS SYNONYMOUS WITH JERSEY FRESH

Shout-outs in supermarkets and at roadside stands that ‘Jersey asparagus is in’ are iconic signs of spring in the Garden State.

“As soon as it gets warm, people start looking forward to their Jersey produce,” says Mike Oliver, produce manager at Pennington Quality Market, a single-store independent located in Pennington, NJ.

Spring signals the start of the New Jersey Department of Agriculture’s (NJDA) brand marketing program, Jersey Fresh, which runs into the fall. It’s a brand worth its weight in green, according to the NJDA’s January 2018 Jersey Fresh Consumer Awareness Study. Of more than 800 people surveyed, 72 percent are more likely to purchase Jersey Fresh products, and 64 percent say they will ask for Jersey Fresh if it’s not in store.

Douglas Fisher, the state’s secretary of agriculture, says “Every major roadway in the state will be dotted with billboards encouraging consumers to buy local, Jersey Fresh  products, an effort that will be complemented by robust radio and social media campaigns.”

Retailers and growers can’t get enough of the brand or the progam.

“We include the Jersey Fresh logo on all of our produce packaging,” says Bill Nardelli, Jr., vice president of sales at Cedarville, NJ-located Nardelli Bros., Inc.–Lake View Farms.

Jay Schneider, produce director for Acme Markets, a Malvern, PA-based chain that operates 169 stores in six Mid-Atlantic states including New Jersey, says, ”[The NJDA] listens to what we say about various programs and gets our feedback to bring back to the growers.  These meetings are important because customer demand continues to increase by double digits each year for locally grown items.”