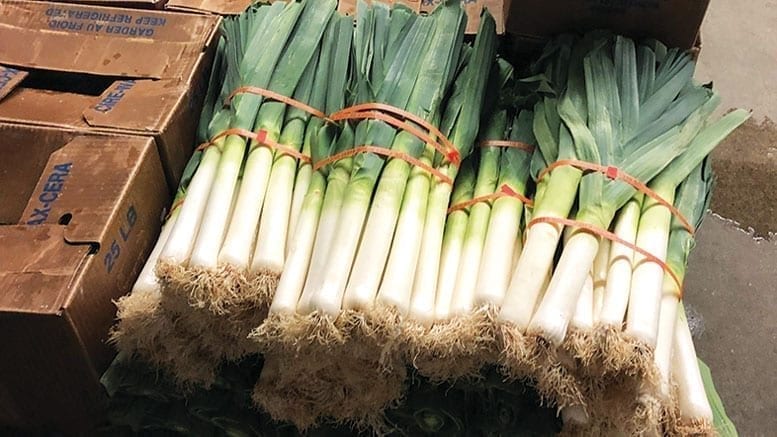 Value and consistency bring customers back for more.

The changes in Boston’s demographics provide an ongoing foundation for strong wholesale market business. Though consolidations, economic changes and increased regulations have continued to affect business, merchants on the New England Produce Center (NEPC) report continued customer diversity and support. “Smaller wholesale market companies are being bought out, so there are fewer companies,” says Anthony Aresco, Jr., partner with Matarazzo Brothers, Chelsea, MA. “However, the companies that remain are getting stronger and staying competitive.”

Dominic (Skip) J. Cavallaro Jr., president of J. Cerasulo, Chelsea, MA, notes the market’s steady customers are made up of chain stores that order over the phone, as well as brokers who walk the market to buy for restaurants and hotels. “Then we have the regular walk-in trade, which is the smaller retail stores and independents,” he says. “They’re looking for the best stuff at the best price.”

Business on and around the market remains steady. “We’ve seen consistency in what our customers are demanding,” says Jim Ruma, president of Everett, MA-based Ruma Fruit & Produce.

Market merchants serve a variety of loyal distributors according to Maurice Crafts, owner of Coosemans Boston in Chelsea, MA. “They come in and give very consistent business year in and year out,” he says. “We appreciate it and work to keep them happy. We have a good variety of independent, niche and ethnic stores including farm-store operations such as Idylwilde Farms (in Acton, MA) and Guido’s Fresh Marketplace (in Pittsfield, MA). They all contribute to steady business. We provide them consistency and help them find the values and product they need.”

Customers support the market because of the value and consistency. “We try to be consistent in what we carry,” says Steven Piazza, president and treasurer at Community-Suffolk. “Everyone knows us for our staple items — we’ve been in business for 80 years — and we continuously try to find value on other items for our customers. We want to make it easy for them to pick
up that one extra thing they need while they’re here.”

One notable customer shift for the NEPC is an increasing rise in foodservice orientation, explains Matarazzo’s Aresco. “We depend more on foodservice now since large retail chains use us more for fill-ins,” he says. “This has changed the dynamic of the market somewhat.”

Paul Travers, co-owner of Travers Fruit Co., Chelsea, MA, reports being challenged by the influx of national chain stores adding additional locations to what seems to be an already saturated environment. “This creates added competition for us and our clients,” he says. “The small retailers are constantly facing greater competition and are needing to come up with new ways to attract the business of consumers. We have expanded the focus of our business to include foodservice, which has increased our sales year-round.”

As Boston’s food scene, both retail and restaurant, has become more competitive and diverse, wholesalers must provide a broader product mix. “Over the past 20 years, the number of items we carry has significantly grown,” says Gene Fabio, president of J. Bonafede, Chelsea, MA. “We’re still carrying the traditional items but are adding items our customers want.”

When Aresco purchased Matarazzo with his partners five years ago, it was strictly tomatoes. “Now we have close to 200 items,” he says. “We carry multiple items to try to provide one-stop shopping.”

Coosemans consistently sources different items it can be successful in. “We have a set of items we’re known for, but we’re always looking for something we don’t sell that we could do well with,” says Crafts.

Ruma reports increasing interest in his company’s niche products of fiddlehead ferns and ramps. “Some wholesalers asked for a smaller package, so we added a 1- and 5-pound unit for the ramps, and for fiddleheads we added a 1-pound and a 3-pound in addition to our original 10-pound. On the retail side, we are offering an 8-ounce tray of fiddleheads to better meet the need.”

Several product trends have made impact in the market. “Greenhouse product is becoming bigger and bigger every year,” says Crafts. “We are known for certain greenhouse products. We have a Canadian, hydroponically-grown Boston lettuce. We have a greenhouse in Maine that we get tomatoes from. And we get a variety of other greenhouse items from Canada including lettuces, tomatoes and radishes.”

Mangos and avocados remain strong sellers, according to Butch Faust, treasurer/clerk at Bonafede. “What used to be a specialty item is now mainstream,” he says. “Thirty-five years ago it would take a week or more to sell a pallet of mangos. Now, depending on the season we sell as many as a load in a week.”

Kim Sanford, West Coast veg sales at Boston Tomato, reports handling more Indian items for customers. “We bring in products to specifically meet their need,” she says. “We’ve been doing more business in peppers, eggplant and cucumbers because we’ve seen more interest from customers in sourcing from as few vendors as possible.”

Ruma’s wild blueberry business remains healthy. “Our Maine season is strong during our July and August deal, and this past year we received some Canadian product to extend the season,” he says. “This gave us three extra weeks.”

Garden Fresh experiences consistent growth in its base processed items. “We try to promote these,” says Burke. “We have a base of 20 to 30 items that people take on a consistent basis. Then, we also get special requests for other items.”

Messinger attributes increasing pre-cut demand to changes in foodservice formats and a labor crunch. “There are a lot of restaurant seats in Boston, yet there is a real labor shortage of talented people in the kitchen,” he says. “This is why restaurateurs are trying to simplify things and outsource prep work. Prepping and fresh-cut is big. If they can figure out how to get value-added items from suppliers, it’s a huge advantage.”

Companies providing value-added options save foodservice operations time in labor and provide consistency, says Burke. “Restaurant choices in the Boston area have grown, but the challenge is finding the people to cook and prepare the food,” he says. “Restaurants are pinched to find qualified prep workers and as a result buy more value-added product.”

Despite many changes, one thing remains the same at the NEPC — the value of relationships. “We have some customers who have been shopping here for generations,” says Cavallaro III. “Their fathers shopped here, and now they shop here. Because of that we know their business.”

Relationships remain a big part of the business, agrees Bobby Nano, owner of Boston Tomato. “One reason I do well is because of how I treat customers,” he says. “They feel comfortable shopping here. When customers walk in our door, we value them, we strive to serve them. I’m so grateful for what I have, and we are grateful for our customers.”

Burke emphasizes the importance of customizing service. “Customers turn to us to solve their challenges,” he says. “Communication is crucial to ensure we know exactly what our customers need. Whatever they ask, we try to provide.”

Many independent stores have specific needs that need to be met in the communities they are serving, explains Cavallaro III. “We need to accommodate our customers. Customers requiring specialty stuff know we can get it. They give me a heads-up, and I look for what they need. Another example is how typically we don’t like to break packages, but we will work with our good customers to meet their needs. Some customers may call and ask us to hold things for them or put it aside, and we do that. It’s important for us to serve our customer.”

Cooseman’s Crafts points to Chelsea Morning Produce as an example of a good regional wholesaler relying on market relationships. “He buys every day,” he says. “Every piece of produce he gets, he buys in this market. He knows he can catch a deal.”

Wes Carr, buyer and owner of Ipswich, MA-based Chelsea Morning Produce, says the value of his market connections are critical to success. “I look for good deals and rely on my contacts,” he says. “For example, Maurice (of Coosemans) called me this morning to tell me asparagus is a good deal, so I scooped it up. Everything is about relationships — even the customers I have are about relationships.”

NEPC companies strengthen relationships by adding fun and value into the sales equation. Crafts says Coosemans put together a Hot Dog Day in July. “This was an event for our customers where we gave out hot dogs,” he says. “It’s something fun and creates buzz around our business. All our buyers responded positively and loved it.”

Travers Fruit offers “sales” year-round to many retailers. “Such sales help increase the sheer volume of products in the marketplace and benefit the dynamics of our business,” says Travers.