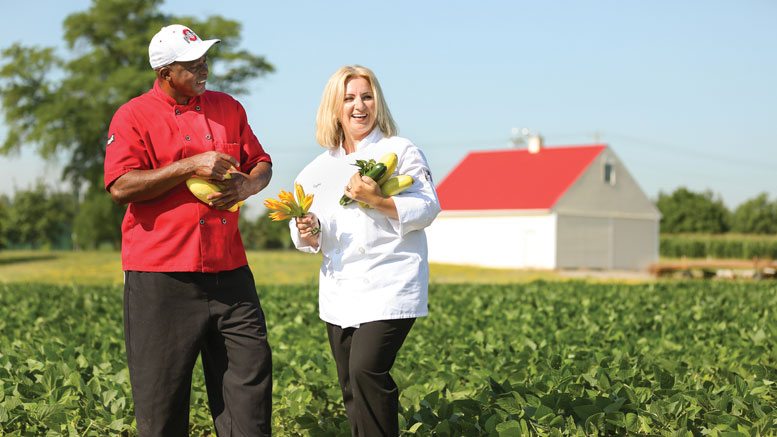 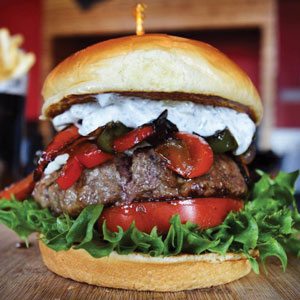 Offering a variety of fresh produce, Ohio growers help their state’s chefs prepare interesting dishes and serve diners hungry for local and seasonal offerings. The Cleveland area has received a lot of notoriety for its chefs and culinary scene. Columbus, OH, and Cincinnati are booming too, says Tony Anselmo, chief marketing officer of Premier Produce One Inc., in Dayton, OH. “In Columbus, there is a powerhouse of restaurants in that area,” he says. “Their growth is unbelievable. It’s the uniqueness of all the difference concepts. Dayton and Cincinnati are also progressively moving.”

At Acre in Columbus, OH, produce remains critical. Acre uses a lot of Ohio produce. Todd Mills, owner and founder, likes to feature local product as long as he can on his menu and picks products that maintain four to six week lifespans. Mills partners with many growers who provide his fast-casual restaurants sweet corn, kale, sweet potatoes, tomatoes, eggplant, pumpkin and other items. The restaurants try to stock up on items like fruits, which it makes into jams, and other products to maintain longer use. “Local is hugely important for us,” says Mills. “We are trying to be a business that helps grow the food and farming economy in Ohio. A big part of that is sourcing local whenever we can.”

Ben Bebenroth, founder of Cleveland’s Spice Catering Co., has taken local literally. In 2014, Bebenroth acquired a farm where he grows up to 70 fruits and vegetables, including asparagus, leafy greens, kale, bell peppers, ginger and tumeric for his Spice Kitchen + Bar and the catering concern. He changes 30 to 40 percent of his menu weekly, particularly during the summer. Bebenroth tries to use as much local produce as he can. His restaurant sources 80 percent of its food from within a 150-mile radius of the city and 20 percent within 20 miles. “Ohio produce is massive,” he says. “Cleveland is a great area for this. Local demand is continuing to grow. There is so much that can be done with agriculture to get back to a more sustainable place. Ohio is leading the charge in a big way.”

Spice Kitchen’s menus feature maps of the farm and show the fields where items originate, orienting dishes to the rows where the crops were grown. Field 7, row 12 grows golden beets. Discouraging to Bebenroth is how many restaurants promote seasonal items, but don’t put it into practice. He says he’s seen asparagus marketed as “local” in March when asparagus isn’t grown regionally. “I am so bored with going out to restaurants and looking at the same things on the same menus,” says Bebenroth. “I’m very adventurous and will eat anything, but you have to put some heart and soul on the plate. That’s what keeps people interested in Spice.”

In the Akron, OH, region, Mike Mariola, president of Mike Mariola Restaurants, is a chef and restaurateur who embraced the farm-to-table concept before it became popular. His first restaurant, the South Market Bistro, which opened in 2002, specialized in providing seasonal and locally sourced menu items. Mariola’s City Square Steakhouse in Wooster, OH, uses local vegetables as does Akron’s Rail, a burger bar concept. City Square sources local lettuce, tomatoes and pickles. It purchases basil from a Cleveland area co-operative. In July, Rail plans to introduce some locally sourced seasonal vegetables, including asparagus; in the fall, Rail will move to roasted local vegetables, including Brussels sprouts and cauliflower.

“In today’s world, if you’re going to call yourself a chef, the expectation is you’re cooking seasonally and buying local, especially for independent restaurants and chef-driven restaurants,” says Mariola. “Chefs are really coming out of school with the expectation they will source seasonally and locally. Consumers are demanding that.” Mariola says restaurant operators can help influence demand for smaller items by requesting vendors source more local products. If he can show produce buyers substantial demand for items, that should encourage growers to supply higher volumes.

Columbus’ skyline can be seen from Ohio State University’s (OSU) farm, which this year doubled its acreage to two acres. There, sweet corn, zucchini squash, eggplant and other vegetables are hand-harvested. Ohio State University Dining Services serves those vegetables, as well as others, including broccoli, kale, lettuce, sweet potatoes and tomatoes to the university’s 45,000 students through 42,000 daily transactions, which can include coffee and an apple for breakfast or a chicken Caesar salad for lunch. 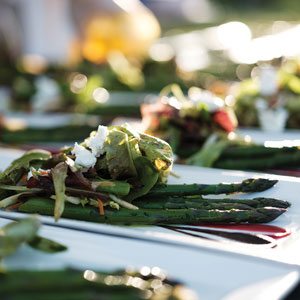 Local foods are popular among university students. When OSU Dining marketed local broccoli last fall, students tweeted how much they enjoyed it. The institution is developing a website that will feature videos and information on local foods, including dairy, meat and produce.

This fall, OSU Dining plans to source fresh herbs from Great Lakes Growers, a northeast Ohio hydroponic operation in Middlefield, OH. OSU Dining wants to also purchase romaine lettuce from the operation. The biggest opportunity in local produce is delivery and assembling everyone to determine how to best move product to its final destination, says Holford. Receiving consistent sizing can also be a concern. “The ball rolls and gets bigger and bigger every year as you continue to make those commitments and work with the farmers to guarantee purchases,” says Holford.