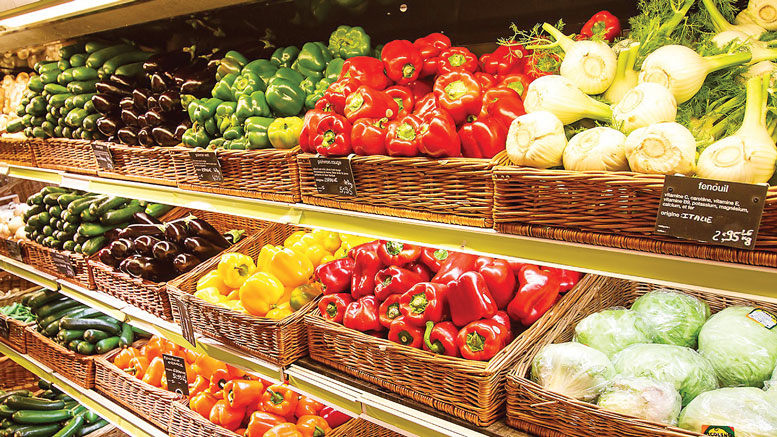 The country adds value by managing produce from field to fork.

“You may see other items sliding into the base,” says Ron Lemaire, president of CPMA, based in Ottawa, Ontario. “Avocados may slide in, they continue to be a growth item. Everything from kale to mango to dragonfruit is growing. Seasonal items slide in too.”

Catania Worldwide provides high-quality fruit through a network of devoted growers and suppliers. With multiple sales and distribution hubs, Catania is vertically integrated, innovative and family-owned. Its top items are kiwi and lime.

“As far as limes, we grow and distribute from Mexico,” says Paul Catania, owner and president of Catania Worldwide, based in Toronto, Ontario. “We grow and ship year-round. We x-dock our limes through our sales and distribution facility in McAllen, Texas — where I am today — and then ship to New Jersey, California and Toronto, and do distribution from there.”

Fruits are popular in Canada, as are peppers, garlic, mushrooms and other vegetables.

“We have the hard vegetables: potatoes, squash, onions, beets, all of the big root vegetable categories,” says Francis Bérubé, director of produce merchandising, Quebec for Sobeys in Montreal, Quebec. “We have a strong growing season from the end of June to mid-October, with lettuces, radishes, strawberries and apples. Quebec is one of the biggest regions in North America that grows strawberries, after California and Florida.”

Bérubé is in charge of French Canada for wholesaler and retailer Sobeys, and handles its 300 IGA stores in Quebec, most of which are independent. “We work closely with these store operators. We have three other community banners, smaller ones, that total maybe another 100 stores,” he says.

“The golden kiwi is yellowy gold inside, and has black seeds but has a mango-strawberry taste, it is very sweet,” says Walt Breeden, vice president of sales, Canada, for The Oppenheimer Group in Vancouver, British Columbia. “It is exciting, is loved by many, has high Vitamin C and Potassium and is one of those new super foods.”

“Most people think lettuce doesn’t have taste, and when they try our lettuce they are blown away,” says David Karwacki, CEO of The Star Group in Saskatoon, Saskatchewan. Whole head lettuce, clam shell and premium salads from Alberta are sold under the Inspired label. As far as popular grapes, “Red seedless was Crimson and Flames, now it’s Sweet Celebration, Jack Salute’s, Allison and Scarlotta,” says Karwacki.

Other produce companies offer grapes too. “Stone fruit and grapes are our top produce items sold in Canada,” says Larry Davidson, president of North American Produce Buyers Ltd. in Toronto, Ontario. “We handle a full line of grapes, everything across the board.”

North American Produce Buyers imports and wholesales fresh produce. It ships coast to coast in Canada, serves retailers, and has operated out of the Ontario Food Terminal for over 50 years.

EarthFresh supplies potatoes, sweet potatoes, organic onions and carrots to foodservice companies and retailers. Fresh table potatoes from the U.S. and Canada are their top item.

“Our favorite and most popular varieties are Whitney, Red Sonia, Agata and Ivory russet,” says Jessica Hughes, director of innovation at EarthFresh in Burlington, Ontario. “The Whitney has beautiful skin and a smooth, creamy texture, and is excellent boiled or mashed. The Agata is also known as a golden gem, and has a subtly sweet, buttery flavor.”

Canada has one-tenth the population of the United States, at about 35 million people versus 350 million people, yet consumes more produce per capita.

“During COVID, the trend was high produce consumption,” says Joe Lavorato, president of fruits at Légumes Gaétan Bono Inc. based in Montreal, Quebec. “People were going to restaurants, but during COVID all they could do was stay home, which was a chance to eat well.”

Gaétan Bono imports and exports produce, specializes in small fruits, and wholesales at Montreal’s new state-of-the-art terminal market on Pie-IX Boulevard. It handles maritime out of Halifax, New Brunswick and Newfoundland.
The pandemic affected the produce industry in many ways.

Lavorato says the trend of eating at home created demand for produce all the way through the supply chain. Breeden of Oppenheimer says COVID restricted people crossing the border between Canada and the U.S., but fortunately truckers were exempt and goods could flow.

CPMA says by the third wave, there was an increase in new produce items, with 40% of consumers trying a new product. “Taste is a key factor. As a retailer, are you selling all the ingredients people are looking for, to drive the taste and flavor profile at home that they normally find in a restaurant or other area?,” says Lemaire of CPMA.

Breeden says we’ll continue to see experimentation with cooking, and that consumers are buying starfruit, and mangosteen from Thailand.

More Canadian consumers are eating healthy now too. This means “fresh product, local product, organic product. Citrus is always popular because of Vitamin C, but we’ve seen a jump in revenue across all commodities in the past 18 months,” says Davidson of North American Produce Buyers Ltd.

With climate change, Canadians are thinking about the planet. Sustainability, small pack sizes and smart packaging are key. “We are proud to share that 95% of our packaging is either recyclable or compostable,” says Hughes of EarthFresh.

“While water is an issue, agronomists are figuring out ways to grow produce in a more efficient manner,” Davidson says.

Many people who move to Canada desire unique products from their homeland.

“In Japan, they like a great sweet potato, it is almost like eating candy if you cure it at a certain temperature. If it is hot they freeze it and they eat it like an ice cream cone. So there are certain things they look for here,” says Breeden.

Diverse communities in Toronto support a wealth of produce items. “Cactus pears are a specialty item that has become a popular item among our North American retailers. Mangos are a big commodity everywhere,” says Catania.

Yet Canadians value local produce too. The “Espace Quebec” section at Sobeys highlights fruits and vegetables from local growers. “The marketing material is blue and white which is the national colors of the Quebec region,” says Bérubé of Sobeys.

Consumers seek fresh produce, good prices and convenience. “A number of Canadian consumers shop every day, that’s the trend here. If you shop daily, the fruits and vegetables are fresher,” says Lavorato of Gaétan Bono. He says Canada has smart shoppers, and strong wholesale and retail competition. For example, Canada citrus is priced aggressively compared to Florida.

Many produce items are imported into Canada, some subject to U.S. safety procedures. “Fresh figs from Mexico, because they are native to the U.S. and to California in particular, have to be irradiated to get into the United States. If you are bringing figs from Mexico to Canada, the truck must be sealed when it enters the U.S., and cannot be opened until it leaves the U.S. The shipment is called in-bond,” says Catania.

In 2020, Canada’s fresh produce imports exceeded $10 billion, and fruits comprised 84% of the total, per Statistics Canada. About two-thirds of all Canadian consumed produce is imported. Canada has a short growing season, and typically imports fruits and vegetables from October through May.

“The largest focus for us, is the U.S. and South America, especially Chile and Peru. We import from Israel, South Africa, and lesser amounts from different places in Europe like Morocco and Spain, but really from all over the world,” says Davidson.

As far as commodities, Statistics Canada says Canadians prefer snacking fruits like grapes and berries, or easy to peel fruits such as citrus.

“We import clementines from South Africa and Argentina right now, and then we move on to Morocco and Spain in the winter,” says Lavorato. This offers year-round availability to Canadian consumers.

Canada also has a consistent quality and supply of greenhouse produce. According to Statistics Canada, in 2020 the greenhouse fruit and vegetable production capacity in Canada rose to 1,809 hectares and sales grew to $1.8 billion. Tomato sales were up 12.1%, cucumbers up 9.4%, and peppers up 7.3%, accounting for 92.5% of total sales.

“Greenhouse is thriving, and is responsible for 50% of exports,” says Lemaire of CPMA. He says Canada, the U.S. and Mexico are integrated in greenhouse ownership and production.

The Oppenheimer Group has organic and conventional greenhouse growers in British Columbia — and greenhouses in Mexico, California and New Zealand. Sobeys has an exclusive hothouse program and sells many English cucumbers from it.

Hothouse tomatoes on the vine, red peppers and beefstake tomatoes are among the top selling produce items for Associated Grocers. “We are proud to service retail locations in Western Canada through our Surrey, British Columbia and Calgary, Alberta distribution centers through our expertise in delivering the final mile,” says Aaron Bregg, vice president of supply chain for Associated Grocers, which focuses on independent grocers.

The Star Group grows peppers, cucumbers, tomatoes, and seedless peppers under the BC Hothouse label — mostly in British Columbia, but also in Mexico.

“Greenhouses have to have the proper lighting to grow in the winter season. You need sun, and a certain amount of light. We grow lettuce 365 days a year in southern Alberta. But growing tomatoes and strawberries takes more light than growing lettuce,” says Karwacki of The Star Group. So it has hothouses in Mexico and Peru, “the two best countries in the world due to sunlight. They are fantastic growing areas, especially during the Canada winter.”

SYNERGIES FROM FIELD TO FORK

Canadian companies find synergies by growing, packing, shipping and distributing. By managing the produce from field to fork, they have more control over quality, price and size of the items. This allows them to add value, resolve challenges, and provide retailers with great customer service.

“At EarthFresh, providing the best quality produce is our core value. We strive to ensure our entire network from our farmers, to our logistics teams, to our distribution channels, all put quality and safety as a top priority so our customers consume only the best,” says Hughes.