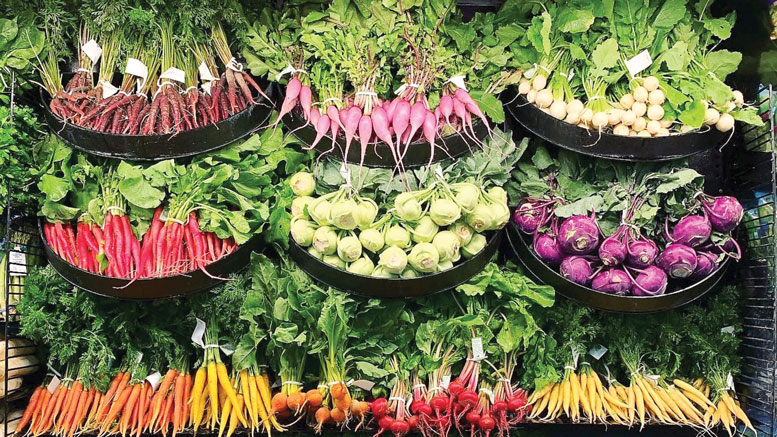 New usage tips and recipes are the key to attracting younger customers to these old-time favorites.

Root vegetables have enjoyed a place at mankind’s global table for millennia. First foraged, then farmed, these hearty underground-grown veggies include everything from familiar carrots, beets and rutabaga to the more foreign such as cassava and daikon. Celebrity chefs, food TV and innovative restaurateurs have brought new life to the root category, using grandma’s favorites in new ways and introducing ethnic roots to the mainstream. The ripple effect is that retailers can tap into the trending ways roots are being reimagined on American’s plates to sell more.

Carrots are leading the way this year in the taproot category, with beets, radishes, rutabaga, daikon and turnips all seeing a resurgence as cooking and juicing increases, says Mark Hendricks Sr., produce director at Rogersville, MO-headquartered Pyramid Foods, a nearly 50-store retailer whose banners include Price Cutter, Save-A-Lot, and Country Mart.

“Carrots have been in my top three overall categories every week this year,” Hendricks says. “Parsnips and fennel are also showing better movement this year than in years past.”

In the tuberous roots category, things like sweet potatoes, ginger, cassava, jicama and yucca are also way up in sales, he adds. “One reason is that baked sweet potatoes are becoming more popular, and the others are being used by home chefs experimenting with recipes in their kitchens.”

Here are six ways to dig up more root sales at retail:

1. GIVE RECIPES THE GRANDMA 2.0 TREATMENT

There’s a consumer demand for a classic heirloom experience and roots fit with this, says Jeff Fairchild, produce director at New Seasons Markets, a 21-store chain headquartered in Portland, OR.

“It started with beets. For us, both red and gold. Now parsnips, turnips, and rutabaga are strong. Some people, for example, are using parsnips in cakes in place of carrots.”

The key to attracting younger customers to these old-time favorites is new-style use.

“Food channel shows and chefs are popularizing new ways to prepare root vegetables, like oven-roasted parsnips, whipped parsnips, and a pureed parsnip bisque as a change from potatoes. Turnip and rutabaga fries. Root vegetables can be prepared in an air fryer,” says Todd Miedema, director of marketing for Miedema Produce Inc., in Hudsonville, MI. “We have several recipes on our website that retailers can use to connect with their shoppers in this way.”

“Ideal for retail environments, this 1-pound pouch displays the radish’s eye-popping interior color — helping consumers recognize the product — while simultaneously improving shelf-life. It is also equipped with a UPC barcode to eliminate confusion about the PLU.”

Recipes and simple how-to instructions can help turn roots from intimidating to inviting.

“Vegetables like celery root or kohlrabi may be intimidating to shoppers who haven’t used them before, but seeing simple and practical recipes can increase their confidence and help in their decision to buy. This can be done at the retail level with recipe cards and signs. Just a bullet point list of applications on the price tag goes a long way,” says Hiltner.

Suppliers are also helping to educate customers at point of sale. For instance, Freshway Produce in Miami, FL, has started putting elastic tags on roots such as malanga with preparation tips. Similarly, Exeter Produce & Storage Co. Ltd, in Exeter, ON, is placing a QR code on its rutabaga that link to the company’s website with recipes.

“We just did this for our tomatillos and poblanos and it worked well, so we’ll be extending the use of a QR code to our rutabaga,” says Jim Veri, Exeter Produce vice president and co-owner. “We thought we’d have fun with it and have staff post their favorite rutabaga recipes.”

2. SELL HEALTH ON THE SHELF

“This new product trades consumers up from canned and jarred pickled beets to a fun and fresh option that is best displayed in the value-added produce section,” Scott says. “Love Beets products also appeal to consumers who are on gluten-free, vegan/vegetarian, Whole30, paleo or Mediterranean diets, filling demand for personalization and customization.”

Carrots are another popular root vegetable known for their high nutrient content, as well as familiarity, availability and ease of preparation. Bolthouse Farms in Bakersfield, CA, offers carrots in different sizes, shapes such as matchsticks and chips, and even flavors. The company’s Snackers, individual portions of baby carrots with seasonings, come in chili lime and ranch, and its carrot juices include carrot ginger turmeric.

“As plant-based eating is becoming more mainstream and popular, carrots and other root vegetables are taking their place at the center of the dinner plate, sometimes as the main course and sometimes as part of a substitute for traditional meat in a recipe,” says Phil Kooy, Bolthouse Farms’ chief customer officer.

The company recently regionally launched its Bolthouse Farms Wunderoots line of carrot-based meal solutions, which include Carrot Dogs, a product Kooy describes as “a great alternative to both traditional meat-based and newer plant-based hot dogs, made simply with whole carrots, marinated in a blend of spices — not chopped or formed — and ready for grilling.”

Root vegetables, with their hearty, long-lasting shelf life, traditionally served as staples when it was too cold for other crops to grow.

“While we’re seeing less consumption of cello (bagged) radishes and bagged beets in favor of bunched, the bagged product has a long shelf life and can be stored for literally months,” says Loren Buurma, in sales and treasurer of Buurma Farms Inc., in Willard, OH.

As such, the root category is often one of a few that can be signed and merchandised as ‘local’ in northern climates in the winter.

“The demand trend continues to support local and regional produce,” says Roderick Gumz, co-owner of Endeavor, WI-based Gumz Farms, which is a part of the Wisconsin Potato and Vegetable Growers Association Healthy Grown program and brand that emphasizes sustainable standards for growing potatoes. “It’s not just about how we grow potatoes, it’s a whole farm approach. It’s a standard and it sets potatoes from the state apart.”

Gumz says retailers have showcased the local nature of the grower’s red and yellow potatoes and onions in in-store signage on display. Facility and transportation enhancements now mean Gumz onions are available into June rather than March or April. This gives Midwest retailers a longer time to source and sell onions as local or regional.

Cultural food preferences and cuisine are the perfect way to promote roots to specific demographics as well as broaden the familiarity of these items to mainstream consumers.

Mexican and Asian consumers love radishes, and use them as garnishes on plates and soups, says Kevin Partida, manager of the vegetable department at Vision Produce Company, in Los Angeles, CA. But most Hispanics have never tasted a parsnip, turnip and rutabaga, which have a huge following in the Jewish community because they are used in specific dishes around the holidays. And the rutabaga is a staple for Scandinavians, Russians and Asians.

Traditional Hispanic root vegetables like yucca or cassava and malanga are also gaining widespread interest for being gluten-free and high in fiber and complex carbohydrates.

“We’ve been offering more specialty packs like 10- or 20-pound boxes, knowing that some stores want to carry these roots, but they can’t sell through a 35- to 40-pound box,” says Jose Roggiero, president and chief executive officer of Freshway Produce.

Jicama is most popular around Hispanic holidays, such as Mexican Independence Day in September, while daikon sells best in January and February for Chinese New Year’s, says Robert Schueller, director of public relations for Melissa’s/World Variety Produce, in Vernon, CA. “We’re also seeing some interesting cross-over. Some chefs are using horseradish, usually in demand for Passover or eaten with prime rib, as a source of heat and substitute for wasabi.”

5. SPREAD THE WEALTH WITH DISPLAYS

There are two profitable ways to sell root vegetables: destination displays and cross-merchandised.
“Roots are part of a fall set. Put them together so shoppers can see all their choices together as a category,” recommends New Seasons Markets’ Fairchild.

At Pyramid Foods, Hendricks exemplifies cross-promoting roots in several ways. “There are several different companies that have developed mixes and blends of dried and fresh root vegetables to display in key areas of the department for shoppers that are building their buggies with ingredients for a new meal or an old standard.

“We have things like hunting displays with carrots, potatoes, and onions for stew mixes, with add-ins like garlic, parsnips and ginger to round out the recipe. We also build juicing displays with a variety of taproot veggies, greens, fruits like apples and pears, and herbs, as serving suggestions for those looking for additions to what they normally use. Charcuterie boards also lend themselves to exotic varieties of things like jicama, daikon, parsnip and, of course, old standbys like petite baby carrots, carrot sticks, turnips and radishes.”

“The radish chips are always the first to go on a holiday or veggie tray,” says Miedema.

Sales of root vegetables skyrocket before Thanksgiving and Christmas, says New Seasons Market’s Fairchild. “We don’t promote them because there’s not a lift based on price. Shoppers who buy roots are not price sensitive; they look more for quality. They don’t want roots that are soft or spongy.”

The appearance of root vegetables in stores signals a change in season to consumers, the beginning of fall, start of the holiday season, and the colder winter months, adds Bolthouse Farms’ Kooy.

“For the Thanksgiving holidays, displaying carrots with other holiday ingredients, such as sweet potatoes, celery and pecans, makes it easier for consumers to gather all components for their meal at one place in the store. And merchandising baby carrots with dips or dressings in the same cold end cap helps to make holiday entertaining that much easier and will drive retailers’ sales of both. This display strategy is especially pertinent throughout all the winter and holiday months, not just on the holidays themselves.”

However, roots are no longer only winter vegetables.

“Colorful roots are an excellent addition to spring/summer salads, tacos, spring rolls, sushi, poke, you name it,” says Babé Farms’ Hiltner. “Thinly slice coin cuts on a mandolin or julienne and serve raw or pickled on top of just about any dish. We see a big demand in the springtime for Easter Egg radishes and baby colored carrots — both of which are great for not only holiday dinners but used in floral displays as well.”