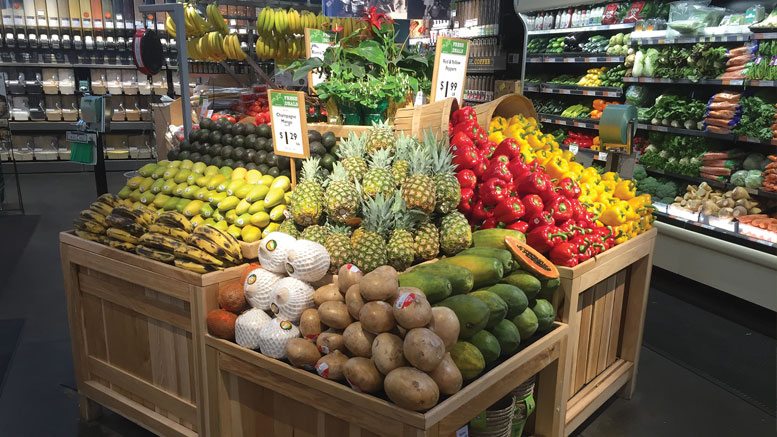 A key demographic market for retailers and brand suppliers — one that loves its produce. 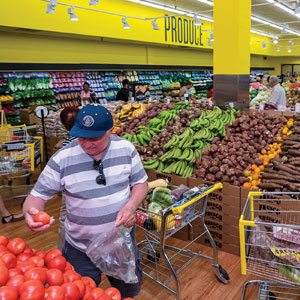 Staple favorites. Large displays. Right pricing. These are a few of the key factors Hispanic customers look for when shopping for fresh fruits and vegetables. Ethnic retailers understand this and are pros in serving this clientele.

Consider that the produce departments in independents and chains contribute as much as 20 percent or more of total store sales just from produce. Mainstream retailers have started to take a bite out of this market, too. In 2005, for example, Publix Super Markets, Lakeland, FL, introduced its Publix Sabor stores. Last year, Jacksonville, FL-based Southeastern Grocers, parent company of Winn-Dixie, opened its first Fresco y Más supermarket in South Florida. Short of a separate format, there are several ways conventional grocers can attract the Hispanic shopper.

Why would conventional grocers want to attract the Hispanic consumer?

“Produce is an extremely important component of meals in Hispanic households,” says Steve Williams, director of produce and floral for Fiesta Mart Supermarkets, a 60-store chain based in Houston, which serves a customer base made up of 75 to 80 percent Hispanic shoppers. “That makes produce for us a significant department.”

Hispanics do have the highest produce consumption of four ethnic groups surveyed in the State of the Plate, 2015 Study on America’s Consumption of Fruits & Vegetables published by the Produce for Better Health Foundation, Hockessin, DE. In 2014, this group represented 406 annual eating per capita compared to 401 for white/non-Hispanics, 394 for Asians and 390 for Black/Non-Hispanics. Broken down further, Hispanics ranked second in fruit consumption, with 334 annual eatings per capita, just behind Asians at 338. In vegetables, Hispanics led with 406 eatings.

Several other factors make Hispanics a coveted produce shopper. For one, this group is a rapidly growing demographic projected to make up nearly one-quarter of the U.S. population by 2040, according to a 2014 report from the Pew Research Center, Washington, D.C. Secondly, Hispanics are great food shoppers. That’s because the dinner table takes center stage in the household, with 65 percent of Hispanic shoppers eating in this location compared to only 55 percent of total U.S. shoppers, according to The Why? Behind the Buy U.S. Hispanic Shopper Study, released by Jacksonville, FL-based Acosta Sales & Marketing in 2015. Additionally, this same data shows Hispanic shoppers average 3.3 meals a day compared to total U.S. shoppers’ 2.8, which translates into 3.5 additional meal occasions each week. In addition, 23 percent of shoppers indicated family requests drove the dinner meal they prepared versus just 12 percent of total U.S. shoppers. Lastly, Hispanic shoppers spend an average of $361 per month on groceries compared to $331 spent by the total U.S. shopper population. 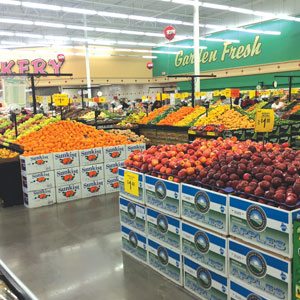 The demand for fresh ethnic produce has steadily gained in popularity over the past several years, says Bill Santoni, director of sales for Coosemans DC, in Jessup, MD. “Ethnic produce items consist of specialty products that target specific ethnic groups based off of traditions brought to the United States mostly by families immigrating here. Some, but not all, of these products include specialty items, fruits, vegetables and herbs, which were not offered in traditional supermarket chains here in the past. We can certainly expect to see continued growth in this category.”

Papayas, mangos and avocados pictured on roadside billboards speak to customer-coveted high-volume items sold at Fiesta Mart Supermarkets. Beyond these, says Williams, “our No. 1 seller is the Roma tomato, followed by white onions and jalapeno peppers. Other big items are papaya, pineapple, limes, bananas and plantains. We also have a spice wall in produce. Dried peppers are huge. We have these on a full table and have to refill it twice a day.”

At Publix Super Markets, “all root vegetables are popular as well as more traditional fruits such as mango, papaya and coconut,” says Maria Brous, director of media and community relations, who adds the chain’s Hispanic population includes those from South America, Central America, Mexico and the Caribbean.

“You need to offer large displays with good quality and priced to offer a value. A big front page ad on raspberries won’t bring this customer in, but one that offers, three or four mangos for $1, for example, will.”

However, retailers catering to Hispanic customers no longer stick to the staples. This is because of the influence of first, second and third generations who enjoy a wide variety of foods. What’s more, nearly six in 10 Hispanics are Millennials or younger, according to Pew Research Center’s 2014 report, The Nation’s Latino Population is Defined by its Youth.

“In the past 10 to 20 years, we have gotten out of our comfort zone and added new items to attract the new generation of customers,” says Cano. “For example, you can’t just stock Roma tomatoes anymore without also offering grape, cherry, round and clusters, which are hugely growing. Likewise, we’ve added Romaine and green leaf to traditional iceberg and bagged salads. With apples, Gala is very strong. In grapes, it’s no longer just red and green, but Muscatos, too. In potatoes, we carry the purple, red and white in addition to the staple Russets. Our customer today is more assimilated and wants asparagus and artichokes, as well as chilies.”

Fiesta Mart’s Williams agrees. “We have multiple generations of Hispanic shoppers. For this reason, we’ve been expanding our variety beyond traditional items. For example, we aggressively purchased and promoted fresh cherries and did very well. Last year, our stores were the sixth largest purchaser of Georgia peaches — and you don’t typically think of peaches as a Hispanic produce item. This season, we’re targeting the melon category and going strong on all different varieties. The key to success is to make sure to offer these items with the freshness, quality and value customers want.”

Cater To The Customer

If you want to attract Hispanic customers, “you need to offer large displays with good quality and priced to offer a value. A big front page ad on raspberries won’t bring this customer in, but one that offers three or four mangos for $1, for example, will,” says Dick Spezzano, president of Spezzano Consulting Service Inc., in Monrovia, CA, and former vice president of produce and floral for The Vons Companies.

Here are some ideas retailers big and small can use to attract the Hispanic consumer.

BIG DISPLAYS. “Plentiful and bulk displays tend to be most appealing. The open air feel or more of a market approach also resonates,” says Publix’s Brous. 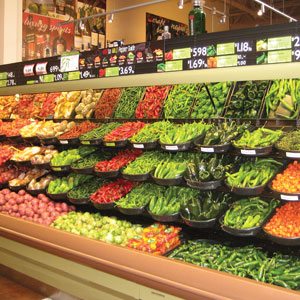 Northgate’s Cano agrees. “The challenge is that big displays can limit variety, because the more variety you have, the smaller the displays. It’s a balancing act.”

According to Dan Quier, retail sales manager for Four Seasons Produce in Ephrata, PA, bulk is preferred to prepackaged product. “Hispanic shoppers like to hand-select their produce.”

Freshness is huge, too. “It’s a good idea to cut root vegetables so customers can see the internal appearance. Because the cut ends will dry out, it’s important to maintain them through the day by retrimming so they look fresh; otherwise, it can deter sales from the whole display.”

Northgate and Fiesta Mart add to the fresh appeal by creating an in-store theater in the form of made-to-order guacamole and in-store cut cactus leaf stations. “We get fresh produce in-store seven days a week. In the past, we’ve tried five or six days, but it just doesn’t work and we always go back to seven days,” says Northgate’s Cano.

Display signage at Fiesta Mart and Southeastern Grocer’s Fresco y Más stores is in both Spanish and English. This is advantageous, considering that 55 percent of U.S. Hispanics are bilingual, 27 percent English-dominant and 19 percent Spanish dominant, per a report by Nielson titled, Hispanic Influence Reaches New Heights in the U.S. (August 2016).

“Hot buys for us are 70-count red bell peppers on ad at 5/$1. We sold two truckloads in half a week. Some may have a blemish, but that’s not as important to Hispanic customers, since they will use these in cooking,” says Fiesta Mart’s Williams. “We also sell truckloads when we offer small mangos at 4/$1 and 138-size apples at 3/$1 or 4/$1.

Beyond pricing, more Hispanic shoppers’ purchases are impacted by in-store merchandising promotions — 26 percent of U.S. Hispanic shoppers indicate coupons at shelf level impact their purchase decision versus 21 percent of total U.S. shoppers; 18 percent of Hispanics say product tastings or demo influence what they buy versus 11 percent for U.S. shoppers, according to Acosta Sales & Marketing’s The Why? Behind the Buy U.S. Hispanic Shopper Study.

THE POWER OF HOLIDAYS. Hispanics in the United States tend to celebrate American holidays like Independence Day and Labor Day, as well as cultural occasions such as Mexican Independence Day in September and Three King’s Day in January.

“It’s very important to recognize that every weekend is like a holiday. Families will go together at soccer matches, weddings, quinceañeras and other events. They want to buy fruit and vegetables that day to eat that same day. That’s why we sell ripe tomatoes, avocados, papayas, mangos and bananas. It’s more important to us to get the sale than worry about losses to shrink,” says Northgate’s Cano.

Seasonal celebratory dishes, like tamales at Christmas, call for fresh produce such as onions, garlic and corn husks. Ditto with ponche, a drink made with guavas, tamarind pods, sugar cane and spices, as well as other fruits such as apples and pears.

“Shoppers will search up and down until they find these hard-to-find ingredients for traditional holiday dishes. This is a great way to entice them in the store, even though they may have never visited in the past,” says Robert Schueller, director of public relations for Los Angeles-based Melissa’s/World Variety Produce.

WHOLE STORE APPROACH. It takes a whole store approach, not just a few items in the produce department, to gain loyalty from Hispanic shoppers says Spezzano Consulting’s Spezzano. This point is further made in Nielsen’s Getting a Flavor for What Attracts Hispanic Millennial Shoppers, which reveals 51 percent of Hispanic Millenials are drawn to ethnic grocery because they have a panaderia (Hispanic bakery) or tortilla shop.

Why are Hispanic Millennials important? “Because as multiculturalism and diversity gain prominence in the United States, these young consumers will play an integral role in spending trends in the next 20-30 years,” says the report.

One Size Stocking Doesn’t Fit All

National dishes offer a clue at what people eat and what the top ingredients on their grocery lists are. For example, American’s proclivity for hamburgers and hot dogs makes the supermarket’s meat department a strong profit center. In Spanish-speaking countries, it is produce that gets heavy foot traffic. Corn is the base ingredient in locro, a customary stew in South America. Cauliflower, carrots and green beans are must-have ingredients in fiambre, a traditional Guatemalan dish. Chilies star in Mexico’s traditional mole, while its root vegetables, including yam, taro and cassava, make for a hearty beef stew called sancocho in Puerto Rico and the Dominican Republic. While fruits and vegetables in general are common denominator fixings, it’s easy to see from these country-by-country examples that Hispanic shoppers are a diverse group.

“Every country is different when it comes to favorite foods and dishes, that’s why it’s important for U.S. retailers not to lump all Latino shoppers together,” says Karen Caplan, chief executive and president of Frieda’s Specialty Produce, Los Alamitos, CA.

Retailers who understand this diversity, even down to specific varieties within categories do well.

There are other differences, and opportunities, retailers can capitalize on, too. A good example is chilies.

“Chile peppers are a staple in Latin cooking,” says Robert Schueller, director of public relations for Los Angeles-based Melissa’s/World Variety Produce, which specializes in Latin ingredients under its Don Enrique brand. “However, those from Mexico will look for serrano, pasilla and jalapeno, while in Central America, South America and the Caribbean, it’s not necessarily about the heat but the flavor, so scotch bonnets, which have a fruity flavor profile, are favored.”

What this means is to attract and satisfy this customer, retailers need to do their homework and learn exactly who their Hispanic shoppers are.