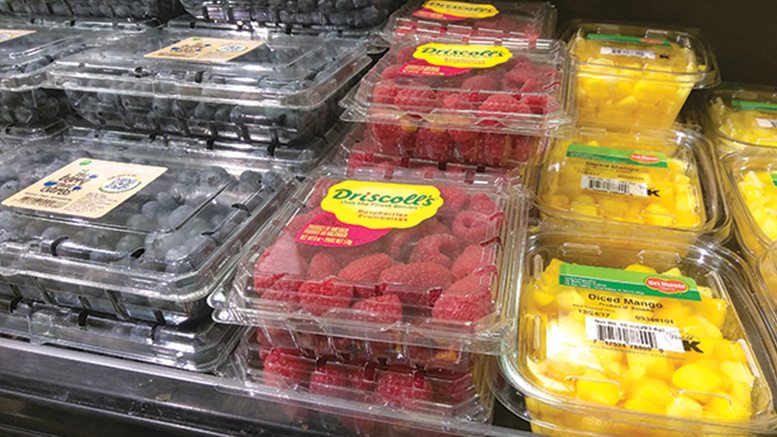 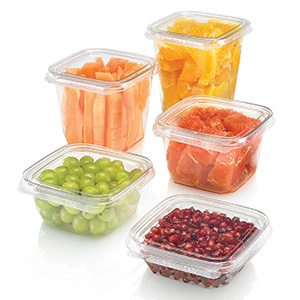 The importance of clamshells being tamper-resistant is key. Sarah Hobson, product manager at Inline Plastics, says her company’s containers “offer increased leak-resistance and result in a longer shelf life than other types of closing systems.” (Photos Courtesy of Inline Plastics)

As consumer tastes trend toward healthier lifestyles that include more fresh fruits and vegetables, packaging suppliers have come up with a wider range of clamshells tailored to the needs of specific new fresh-cut products.

Sonoco, a $5 billion-a-year global leader in consumer packaging, expanded its efforts in produce in 2017 with the acquisition of Clear Lam of Elk Grove, IL, and Peninsular Packaging of Exeter, CA.

An entirely new line of packaged products is emerging, as half the respondents to a recent survey done for Sonoco said they snack on fresh fruits or vegetables five or more times a week.

“Clamshells are used extensively in cut fruit and other value-added produce, and are increasingly used in prepared salad mixes due to the protection of its contents and the high merchandising of the product, which leads to impulse sales,” says Sarah Hobson, product manager at Inline Plastics Corp., Shelton, CT.

Consumers can rest assured with produce packed securely in tamper-proof packaging that carry labels designating where and when it was harvested. Now, with major retailers urging them on, packaging producers are working to bring new levels of efficiency and sustainability to the clamshell.

Consumers have come to expect that clamshells be recyclable, and be made from recycled material.

“Customers like Walmart tend to favor more sustainable packaging options,” says Michelle Ziegler, national account manager for Pactiv, Lake Forest, IL. “We typically use a high percentage of recycled content in our PET containers, with a portion of virgin PET to improve clarity. Frequently, customers remark on the cloudiness of recycled material, so the virgin material is used to offset that haze.”

The 1959 merger of Central Fibre, American Boxboard, and Ohio Boxboard created Pactiv, itself a subsidiary of Tenneco, Lake Forest, IL.

Some producers say the most effective way to make these petroleum-based containers greener would be to take recycling efforts to new levels.

“If a clamshell, like ours, is made from recycled PET, it is very sustainable,” says Kurt Zuhlke Jr., president and chief executive of Kurt Zuhlke & Associates, Bangor, PA. “I just got back from Holland, and they have one of the most successful recycling programs in Europe. Look at Europe in terms of how successful they are with recycling; that’s where we need to be.”

“The material has to be uniform when the clamshell is formed, or you can have problems on the automated line with clamshells not closing or the containers being crushed.”

Yet another attempt at sustainability, or at least economy, has involved reducing the amount of material used to make each clamshell, but suppliers advise buyer beware of these flimsier packages.

“Most important is the consistency of the material,” says Zuhlke. “The material has to be uniform when the clamshell is formed, or you can have problems on the automated line with clamshells not closing or the containers being crushed. This happens when the manufacturer tries to make it thinner than the specs call for. We do see this from China, in particular.”

There is a happy medium that economizes on material while, at the same time, provides a sturdy container.

“When it comes to the weight of the containers, manufacturers strive to find the optimal use of material for their packages,” says Inline’s Hobson. “It is important to balance between keeping the containers lightweight and easily recyclable, but also sturdy enough to protect the contents and support shelf stacking.”

One California company is hoping to lead the way into a greener future with a “clamshell” that eschews petroleum entirely, in favor of packaging made from plant material. “We have launched a new line of sustainable packaging that is plant-based,” says Sara Lozano, marketing manager for Sambrailo Packaging, Watsonville, CA. “We’ve gotten a positive response, especially from organic growers and consumers. Stores are delighted to have an alternative.”

Nearly a century old, Sambrailo offers a variety of packages for nearby strawberries and blueberries and neighboring Salinas Valley salad products. In 2017, the company introduced a plant-based line of packages called Readycycle that is particularly appealing to organic growers who have a strong market share in berries. Sambrailo is hoping that a greener generation of consumers will want packaging with a softer footprint. “This will be a huge industry shift, and we’re getting ready for it,” says Lozano. “It gives you a choice of plastic or a more sustainable alternative. We still offer the regular clamshell, and we’re still selling more of them than the Readycycle.”

But in addition to the appeal to environmentally oriented consumers, there are also other advantages to its plant-based packages. “You can take advantage of all the surfaces for print, rather than just the top and the bottom,” says Lozano. “We don’t have a button lock; it’s more like a friction lock.”

There is a price premium for this new product, but Sambrailo hopes to narrow the gap as the economies of scale equalize. “It costs more with the current volume,” says Lozano. “With the volume, we run there’s definitely a cost factor, but we’ve already been able to bring down the cost as the volume increases.”

Even in this experimental stage, Sambrailo is offering its ecological “clamshell” in a number of different sizes and formats. “Readycycle is available in an open pint basket, which is the same size as the old green baskets, and in 6-, 12- and 16-ounce sizes with either an open lid or a peekaboo window,” says Lozano. “You can look at the fruit by opening the window and closing it.”

How Much Security is Enough‭?‬

Clamshells must have the ability to keep food fresh, even after they have been opened, and they must give a clear view of the produce.

One option gaining favor is to replace the rigid lid that snaps securely shut with film that can be pulled back and sealed shut again.

“I’ve seen more heat-sealed packages,” says Pactiv’s Ziegler. “You take a tub with a flat surface that is heat-sealed on top. You can get more into a modified atmosphere with a seal, and get extended shelf life.”

These “clamshells” may offer both longer shelf life and savings in the material needed to make the package.

“The newest and lowest cost versions of trays are with resealable produce films,” says Sonoco’s Forowycz. “This is the newest trend that replaces older-style clamshells. This technology is a variation of common cookie packaging. It is proprietary to Sonoco and delivers resealable containers at an economical cost. We also have a new flexible, stackable, recloseable package made from a roll of film on a vertical firm film seal machine. It is called PrimaPak and is a hybrid package between a tray and a bag.”

There are differences of opinion, however, over whether these containers provide adequate protection against contamination, threats to food safety or shrink.

“I’ve noticed people at the store level open these, take the product out, and seal them backup,” says Zuhlke.

These resealable packages raise the question of how important it is to know that the container has not been tampered with.

“Tamper-resistance is extremely important,” says Inline Plastic’s Hobson. “It provides an added level of confidence for retailers and consumers when making a purchasing decision. It ensures contents have not been removed (resulting in a lower quantity over the stated label) or contaminated (causing a potential health risk). In fact, Inline was the first container manufacturer to introduce a tamper-resistant and tamper-evident container in 2005 with our Safe-T-Fresh line.”

For Inline, tamper-proof is related to shelf life and extends to making sure all sides of the package are secure. “Perimeter sealing is a key differentiator when comparing clamshell products,” says Hobson. “Inline’s containers offer increased leak-resistance and result in a longer shelf life than other types of closing systems.”

Protection of the product from contamination, human or otherwise, is the main reason for packing in clamshells.

“In food, the tamper-proof packaging is critical, and clamshells are but one form of tamper-proof packaging,” says Jim George, director of education at the Institute of Packaging Professionals, Oakbrook Terrace, IL. “Clamshell packages, by design, are difficult to open, especially for high-value products where theft is prevalent. Product safety is the tradeoff for the inconvenience of having to work harder to open a clamshell package.”

Many end users have come to expect they will be able to tell if the package has been tampered with.

While food safety is a universal packaging standard, there are, however, almost as many produce clamshell styles as there are fruits and vegetables shipped in these durable packages, because each one is suited for a particular job.

The Right Package for the Job 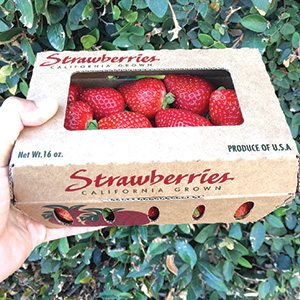 Sambrailo Packaging, which introduced the plastic clamshell in 1987, has taken packaging to a new level with its ReadyCycle 100-percent recyclable boxes that contain a ‘friction lock,’ instead of a button lock. One of the big benefits of the cardboard-style containers, aside from their sustainability, is the ability to custom-brand them. (Photo Courtesy of Sambrailo Packaging)

There is a level of sustainability in clamshells that does not depend on the material or method of construction, but on how efficiently it transports food and how effectively it guards against spoilage.

“It’s not so much one clamshell being better than another, but rather having a design that’s appropriate for your product,” says George. “One advantage of a clamshell is that it can be designed very tightly around the product, which can be a space-saver per square foot of shelf space, as opposed to other packaging forms.”

The well-designed clamshell should save space at every step from the field, to the packing house, on to the distribution center and on the produce department shelf.

“You want as much product,” says Pactiv’s Ziegler, “per case, per pallet and per truckload.”

The way to achieve this efficiency is not the right clamshell, but the right container for the particular produce item.

“There are standardized sizes for various types of vegetables and fruits,” says Forowycz. “Within those standard footprints, there is customization of appearance and performance. For example, tomatoes and berries have standard sizes to fit shipping containers. Lettuce is similar with 5-ounce, 10-ounce, and 1-pound sizes. Not all clamshells conform to standard footprints, but the majority does.”

Berries are among the fruits most likely to be packed in clamshells, but the specifications are not the same for all berries.

“With blueberries, you look at the locking strength, how it denests as it runs down the line,” says Ziegler. “You want it to smoothly denest and stay closed as it moves down the line. Strawberries are field-packed; you want no chads, holes or hanging plastic.”

One important test for strawberry packaging providers is whether they have the logistical chops to get the right number of clamshells to the right place at the right time because 2 million crates of strawberries are packed in California fields every year.

Whatever the shape, size or style, these packages are about efficiently moving, displaying and maintaining freshness.

“Clamshells foremost are about security and functionality,” says George. “A key purpose of a clamshell is to keep a design’s central of gravity close to the package midpoint. The thing that makes one clamshell better than another is dependent upon the user. Their one-piece construction gives marketers more design options. For produce, a given is that any clamshell used should show the product inside from all angles, so consumers can see the freshness.