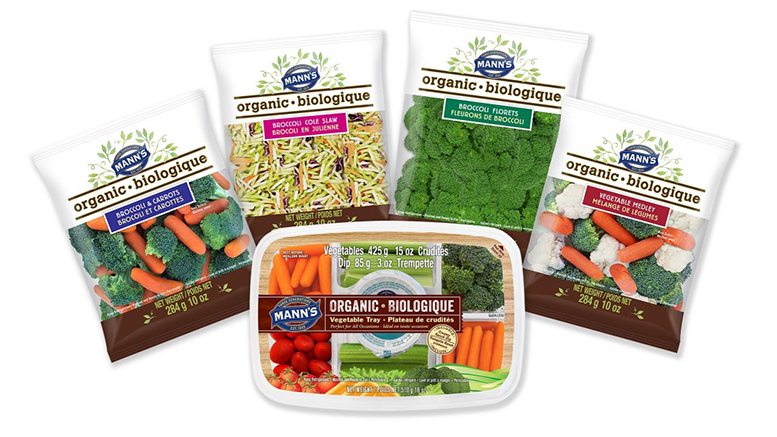 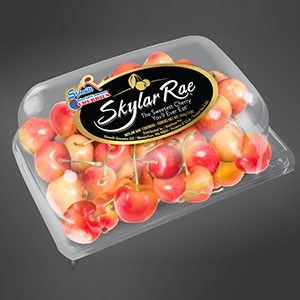 Produce growers and marketers use a variety of packaging to communicate their messages to shoppers. Packaging remains vital to attracting consumer attention.

Storytelling is a key part of packaging and has changed the way Stemilt Growers Inc., which grows and ships apples, pears and cherries from Wenatchee, WA, sells cherries.  Since 2013, it has marketed premium cherries through Kyle’s Pick, for Kyle Mathison, co-owner. Stemilt’s Half-Mile Closer to the Moon program promotes cherries grown a half-mile above sea level. The program uses packaging to engage shoppers with interesting story lines.

“People want to know who grows their food and want a message from the grower,” says Roger Pepperl, director of marketing. “Creating these storylines, tying them into your packaging and merchandising, is super important. If you don’t tell the trade you have a better product, how will you get it into the door for your consumers if you don’t start out with a good story?”

At Stemilt, packaging design is done in-house. When creating packaging for its Skylar Rae cherries, the company wanted to create attention. The inverted strawberry clamshell makes the bottom the top. The label stands out in the middle of the cherries’ bright color. Unlike a subpar jewelry box containing expensive jewelry, the classier clamshells help change shoppers’ perceptions of how an expensive premium cherry should look. “You want a nice box when you buy a piece of jewelry,” says Pepperl. “When you buy a nice, expensive cherry, you want that package to carry that same emotional feeling of the cherry. That’s what a package has to do. It has to carry the value proposition.” 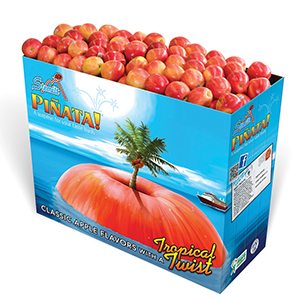 Stemilt also places much attention in designing cartons which hold its bulk and packaged tree fruit. Rave, a new apple Stemilt is introducing, will be shipped in burning fuchsia red boxes which “really pops” and “violates your eyes,” making shoppers wonder what the product is, says Pepperl. Stemilt markets its Pinata apple, a blend of heirloom varieties, in colorful boxes featuring an apple floating in a tropical ocean with a palm tree sticking out of the apple’s top. The eye-catching cartons promote the fruit as “Pinata: A Surprise for your Taste Buds” and “Classic Apple Flavors with a Tropical Twist.”

During the dreary January and February shopping months, retailers erected displays featuring palm trees and cross-merchandised them in end cap displays with pineapples. The tropical-themed promotions generated high purchasing levels and helped change the way apples are sold, says Pepperl. “It’s really important in a store environment to have a nice carton that carries the consumer message prior to sale,” he says. “Even when it comes into a grocers’ warehouse, it creates attention. You have to put it in a carton anyway; so as long as you have a carton, why not hit a home run with it? Let’s do the carton right and deliver messages to whomever we can.”

Research conducted by Mann Packing Co. Inc., a Salinas, CA-based supplier of fresh and fresh-cut vegetables, shows what consumers desire in fresh item packaging. The study found 92 percent of those surveyed said they did not use Mann’s black tray lids for serving, per the package design. In redesigning its vegetable platters/trays, it removed the package’s black plastic lid. Mann’s new large tray has 38 percent less packaging material than the old tray, 43 percent less than its smaller trays and 50 percent less packaging than other trays on the market.

“Offering something consumers can use has always been an effective tool,” says Jacob Shafer, senior marketing and communications specialist. “For us, it’s all about convenience. Packaging features such as easy opening, being reclosable and portable continue to drive our packaging innovation.” All of Mann’s corrugated and plastic packaging is recycled, eliminating packaging waste. Its trays reduce 1.4 million pounds of plastic from its landfills annually. 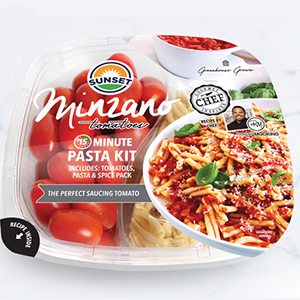 Mastronardi Produce Ltd., based in Kingsville, Ontario, Canada, which markets through its Sunset brand, uses many ways to communicate the benefits of the greenhouse tomatoes, peppers and cucumbers it grows and ships. “For benefit messages to be effective, they must be relevant to a company’s target consumer and distinct to its brand,” says Paul Mastronardi, president, and chief executive. “On-pack recipes are one way of capturing consumers’ attention and inspiring them to go beyond the norm and experiment with produce.”

Mastronardi points to its new Sunset Chef Inspired series, which is promoted on Sunset brands. The premium line features on-pack recipes from celebrity Chef Roger Mooking and shows consumers interesting ways they can use produce to elevate their meals. pb