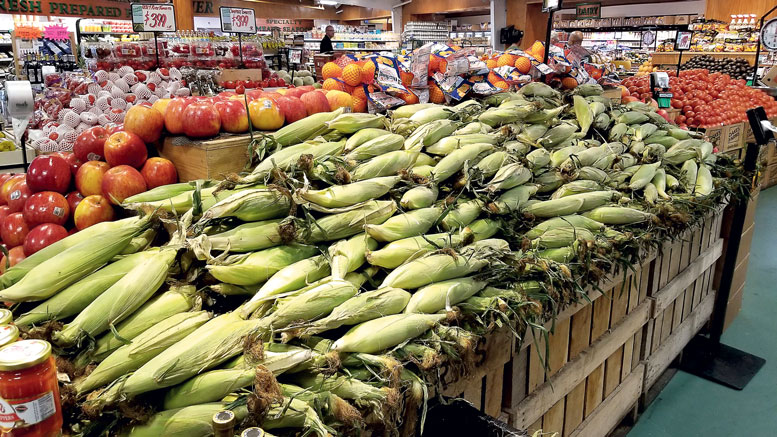 Although sweet corn has been around for centuries, plant breeders keep developing varieties that are even sweeter, and shippers are offering value-added products that are ever more convenient. The result of these pioneering efforts: This top seven vegetable is on the rebound.

Even though fruits are important for summer retail merchandising, sweet corn plays a vital role in supermarket produce sales. At Morton Williams, a Bronx, NY-based chain of 16 stores primarily located in Manhattan, sweet corn is a big seller. “During the summertime, it’s an important item,” says Marc Goldman, produce director. “It depends on the store, but we do as much displaying of sweet corn as we can where we can make a big display of it.”

Sweet corn is a driving force in the summertime vegetable program, adds Renee Goodwin, director of sales for Frey Farms, Keenes, IL. “Sometimes in the rush to embrace the wide assortment of summer fruit, shoppers can overlook the vegetables.”

“Sweet corn continues to be a strong staple commodity for a lot of retailers, especially in the summertime,” agrees Daniel Corsaro, president of Indianapolis Fruit Co. Inc., in Indianapolis, IN. “During the summer corn season, you see a lot more impact displays — the larger stacks, unique stack shapes, end caps and standalone volume displays.”

Sweet corn is especially important for Midwestern retailers who can promote the narrative of the product’s origination and its local growers, he adds.

Sweet corn is a harbinger of summer and can drive retail sales. “Once summer kicks in, sweet corn kicks off barbecue weather and all the outdoor activities,” says Daren Van Dyke, director of marketing at Five Crowns Marketing, Brawley, CA. “Corn is huge for the merchandiser. When people look and see corn on promo and a good deal, it becomes kind of an event. They will buy steaks and grab charcoal and beer. The same with watermelons, which is why they’re so promotable for the summer holidays. People will almost map their plans around good deals like corn.”

And sweet corn is an important item for families. “Sweet corn is extremely popular with kids,” adds Van Dyke. “It is fun for kids. Kids love to eat sweet corn.”

Marketing corn in the spring and summer is easy, especially in the Midwest and Northeast where corn is associated with warmer weather, says John Alderman, sales manager at Duda Fresh Farm Foods, Oviedo, FL.

A sweet corn merchandising calendar can boost sales beyond summer, too, he adds, suggesting in spring and summer, promoting any item that relates to grilling, like butter and/or grilling seasoning. “Winter and fall can use cross promotion with soup and salsa recipe items like tomatoes and onions. Then holidays, like Thanksgiving, offer a great opportunity to cross promote products like celery, sweet potatoes and onions.”

According to the U.S. Department of Agriculture Vegetables and Pulses Yearbook released in April 2019, the most recent updated year, per capita sweet corn consumption stood a tick under 7.8 pounds in 1970, slumped to less than six pounds in 1980, but slowly rebounded to more than nine pounds around 2010, until it fell again to around seven pounds the past few years.

“While the general trend looks to be upward, unless the past three years are more than a statistical blip, some SKUs (stock-keeping units) stand out as driving future growth in the category,” says Alderman, adding “value-added products are gaining ground in the space of sweet corn, even in the spring and summer when those seasons have been traditionally big bulk displays.”

During most of the summer, the corn is closer to many markets than in the springtime, says Turek Farms’ Turek. “From July forward, corn is being produced in a lot of locations on the Eastern Seaboard, closer to the market. Theoretically, we can pick corn in the morning and have it arrive in a Northeast distribution center that night. It could be on a shelf in 24 to 36 hours, which is tougher to accomplish other times of the year.”

VALUE ADDED ON THE RISE

Since the coronavirus pandemic, sales of packaged products have increased, says Morton Williams’ Goldman. “People are buying more than they did versus the loose corn. We are seeing good-sized increases. Since the pandemic, everything packaged has picked up.”

“Tray packs actually kind of exploded,” observes Van Dyke of Five Crowns. And that’s likely to continue, he adds. “Consumers like to look at the tray packs, see the quality is good, pick them up and take them home, knowing they’re getting good quality and not having to do all the shucking work.”

Value-added will continue to show growth in the category, agrees Alderman. “With more retailers or regions putting restrictions on foam trays, growers and marketers will continue to focus on recyclable and sustainable packaging alternatives,” he says.

“When we started packaging tray pack over 30 years ago, we had trouble convincing retailers that it was up and coming, but today, it’s a big seller,” he adds. “Traditionally, it is packed four or five ears in a tray for retailers and wholesalers, and eight ears in the case of club stores.”

During the pandemic, Duda experienced a shift in shoppers purchasing packaged versus bulk produce. “We saw a huge spike in the demand for packaged corn as many shoppers were looking for food that was sealed to ensure it was safe to consume during that uncertain time,” observes Alderman.

“While we know much of this trend is Covid health- and safety-related, we believe the pattern of purchasing prepacked produce will continue, as shoppers adopted new habits during the pandemic,” he adds. “Additionally, online, app ordering, home delivery, etc., has driven the increased demand in value-added corn, and we believe that trend will continue as well.”

Value-added packs are favored by consumers and retailers for several reasons. For consumers, a lot of it is convenience. For retailers, packs can reduce the shrink at the store level that comes from consumers pawing over and stripping the ears of corn in search of the good ones. Tray packs are also easier to scan at the register, and usually provide the retailer with a larger ring, notes Hayes.

“Tray packs give the consumer a perceived benefit of seeing the quality before purchase, and also the feeling that the corn package is safer than its loose counterpart that may have been touched numerous times throughout the day,” he says. “For those swayed by eye appeal, the bicolor variety in particular has seen a jump in popularity in the tray pack arena, causing increased purchases.”

Today, corn suppliers are offering a greater variety of value-added options, although sweet corn has been slower than others to fall into the value-added transformation, says Indianapolis Fruit’s Corsaro. “In the past 18 months, we have started to see corn produced and provided in the marketplace in different ways. Whether that’s combo packs, cook-ready packaging or prepared and prepped, corn is and continues to be a strong commodity for us on a year-round basis.”

Retailers have many options when it comes to displaying and merchandising sweet corn to increase sales.

“Bigger is better for sure,” observes Turek. “Those displays that are at least the size of a produce bin, or a table in front of the store, seem to work well. If the husk is nice and green and the corn looks good and it’s piled up high in the store, people are tempted to pick it up. If you have to hunt and peck and look for it in the back of the produce department, it probably won’t sell.”

To attract shoppers’ attention, Morton Williams places sweet corn toward the front of the produce department, and to spur sales of both bulk and tray-packed, the chain works both in the same display. “It gives people a choice,” says Goldman.

Wherever you put them on display, shippers agree these trays are the key to an increasing sweet corn category. “The location and size of the display are key,” says Van Dyke. “If you put them on ad and place them in predominantly high traffic areas, toward the front of the section when shoppers walk in, and if you build big and attractive displays that have excellent quality, the shoppers are going to pick them up.”

Van Dyke also recommends erecting displays of tray pack and bulk corn in different spots, near the meat or store entrance, plus the regular position, as well as end cap displays.

“Many people put the tray packs right beside the bulk corn, but others see that as counterproductive because of the difference in price,” says Hayes. “Some people put it by the cut fruit and the other value-added products. The positioning the tray packs next to higher priced items has its benefits for those focused on value-added.”

Bottom line, strategically positioning corn in numerous areas will help generate sales. “You want to put them in multiple areas,” says Van Dyke. “You want to really attract that person to corn in multiple traffic spots.”

Corsaro encourages retailers to think about volume opportunities, too. “Corn allows retailers to build a basket size. As the family size grows in the U.S., corn is a good item to buy multiples of. You see a lot of four for $10, five for $8 and six for $4. Corn provides a great opportunity to trade people up to larger purposes.”

While price drives consumer sales, displays help as well, observes Duda’s Alderman. “Whether it’s a story about where the corn is from or a display that tells you the varieties of ways to prepare it, there are a number of options retailers can use to excite consumers,” he says. “Another way retailers can excite shoppers is to direct them to ‘connect’ with the farmer or brand on social media or to visit the website.”

Telling farmers’ stories interests shoppers, agrees Frey Farms’ Goodwin. “I believe consumers appreciate the opportunity to learn about the people responsible for providing their food. The best experiences most people have with produce is when it’s purchased and consumed fresh, and even moreso when it’s from a local source.”