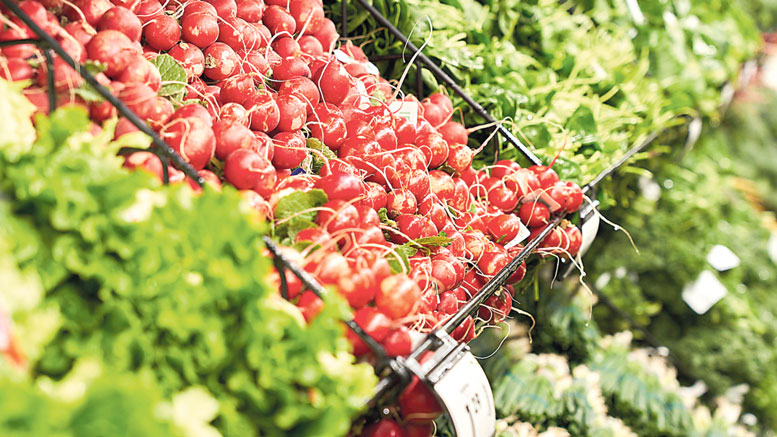 PHOTO COURTESY OF THE KROGER CO.

The Buckeye State is within 600 miles — an overnight delivery — of 60% of the U.S. population.

Ohio residents often carry a Rodney Dangerfield-like chip on their shoulders — they ‘don’t get no respect.’ You can’t describe a Cleveland Browns fan without using the adjective “long-suffering;” no one wants to vacation in Ohio because it’s flat and boring; and the Midwestern state is all rural farmland.

Nothing could be further from the truth.

The state’s gems include Lake Erie to the north and the Ohio River to the south; a diversity of natural resources, including a national park; and an extensive arts and culture scene. And if you want major league sports, it has two baseball teams, a basketball team, hockey and soccer teams — oh, and the Pro Football Hall of Fame.

For the produce industry, one of Ohio’s hidden claims to fame is its geographic location — it is within 600 miles of 63% of the U.S. population, as well as the most populous parts of Ontario and Quebec, which makes produce supply to and from the Buckeye State an important market.

For the produce industry, one of Ohio’s hidden claims to fame is its geographic location — it is within 600 miles of 63% of the U.S. population, as well as the most populous parts of Ontario and Quebec, which makes produce supply to and from the Buckeye State an important market.

“That’s pretty unique,” comments Alex DiNovo, president and chief operating officer of DNO Produce, a Columbus, OH-based produce distributor and processor, “and a lot of people don’t realize the access we have to other cities.”

“Ohio is not just a fly-over state in the middle of nowhere,” adds Chadd Buurma, president of the Willard, OH-based Buurma Farms. “We’re an overnight, fresh delivery to the majority of the nation.”

“The fact that Ohio produce is local to the majority of the population of this country is pretty impressive. A lot of consumers, and buyers, don’t realize that,” says Buurma, who is the fourth generation at Buurma Farms, which has farms in Michigan and Ohio and packs its produce — radishes, beets, lettuces, parsleys, southern greens, sweet corn, green onions and celery — under the “Buurma” and “Holland Brand” labels.

“My sweet corn can be picked today and on the shelves in New York City in 24 hours. You’re not going to get any fresher than that.”

DiNovo adds that many outside of Ohio would be surprised to learn the diversity of produce grown within the state. “From a produce standpoint, there is quite a bit of local produce that enters the marketplace. We have a lot of vegetables — zucchini, cabbage, squash, tomatoes, apples — there’s a lot of product that is grown right here in Ohio.”

Jeff Zellers, president of K.W. Zellers & Son, a grower-packer-shipper of leafy and salad vegetables that ship under Arrow Brand vegetables, agrees. “When most people think of Ohio agriculture, they think of traditional agronomic crops and livestock. The reality is there are volumes of those salad type vegetables — radishes, green onions, herbs like cilantro and parsley, leafy lettuces.”

With rich natural resources and a tradition of agricultural production, Ohio is home to many fruit and vegetable growers who supply both the fresh and processing markets. For example, the 2017 U.S. Census of Agriculture recorded more than 1,100 apple growers in the Buckeye State, including seven orchards each with more than 100 acres in apple production. In 2019, Ohio ranked 10th in the nation in pumpkin production, and the state has 3,000 acres of unique muck soil, which produces 10% of the state’s vegetable supply, according to The Ohio State University.

Some of that produce makes its way out of the state, DiNovo says, “but for people who operate in the state with an emphasis on local, Ohio produce can also take up a lot of market share.”

He says DNO Produce, which is also a founding member of the Ohio Department of Agriculture’s branded Ohio Proud program, uses that local produce as much as possible, “just to cut down on the food miles and also because of the customer advantage.”

Buehler’s Fresh Foods, headquartered in Wooster, OH, is one of the state’s retailers that prides itself on providing local produce to its customers. “We have some great local farms that we have partnered with for over 50 years that produce amazing vegetables and fruits,” says Jeff Tomassetti, produce/floral director for Buehler’s. The supermarket chain, which became an ESOP (employee stock ownership program) in 2017, has 13 retail stores in northeastern Ohio, with a 14th location slated to open soon.

Tomassetti says twice a week, from April through mid-November, Buehler’s buys at a local wholesale produce auction, Farmers Produce Auction in Mount Hope, OH, where 95% of the products are grown in the immediate two-county area. Other local growers deliver directly to the Buehler warehouse.

Tomassetti says those local purchases are obviously seasonal — early July through September, for example, for Ohio sweet corn — but adds, “we try to work these little short programs as long as we can, and work with some great partners here.”

“To provide the freshest produce, we team up with top growers throughout the U.S., including local Ohio growers,” she adds. “ALDI typically offers seasonal fresh fruits and vegetables delivered to stores daily, so our shoppers get the best value on produce at the peak of its freshness.”

“We are very fortunate to have two of the larger Ohio farms within 100 miles of our distribution centers, which makes our decision to purchase from them very easy,” he adds. “They both offer a large variety of vegetables that meet all the USDA guidelines for food safety and quality.”

OHIO BY THE NUMBERS

Ohio is the seventh most populated state in the U.S., with an estimated population in 2021 of 11.69 million, according to information from the Ohio Department of Development. Ohio’s minority population has increased 38% since 2000, and now stands at 21% of Ohio’s population.

Eighty percent of Ohioans live in metropolitan areas — the majority in and around the major cities of Cleveland, Cincinnati and Columbus, the state capital, which is often used as a bellwether of product testing for national chains. But Ohio has an important rural component too, as more than half of the state’s 88 counties are considered “rural” by federal definition.

The state has a strong industry of retailers feeding those millions. Major supermarket chains include The Kroger Co., which is headquartered in Cincinnati, OH; ALDI; Giant Eagle Inc.; Moran Foods (Save-A-Lot); and Meijer Inc. There are also regional chains, such as Heinen’s and the Fred. Albrecht Grocery Company (Acme Fresh Markets), both in the northeast; strong independent stores; and many seasonal and year-round farmers markets.

Like the rest of the world, Ohio was rocked during the Covid-19 pandemic in 2020 and early 2021. Some of the produce trends that started during the shut-down remain, say several industry sources.

“We saw our retail partners pare down some of the items they were purchasing,” says Katie Schwab, vice president of Produce Packaging, headquartered near Cleveland in Willoughby Hills, OH.

She adds Produce Packaging saw a drop in some of its retail partners’ prepared food orders or other items as salad bars and hot bars were closed, and not all have been reopened.

“It sounds like some of our retail partners are looking for creative solutions to be able to have some version of a salad bar,” Schwab says, “but we’re still waiting to see if they will or will not open those again, along with the hot bars.”

Grower-packer Zellers says the market is rough right now, across most commodities. “The demand that we’ve had so far this year, both foodservice and retail, was what I thought we would’ve done a year ago — it’s sluggish.”

“There’s just an excess of product,” he adds. “Usually these things work themselves out, but it’s just painful going through it.”

Sirna & Sons Produce had to pivot during the pandemic lockdown, says Tom Sirna, so it penetrated the retail sector by offering the general public a large selection of produce and grocery items out of its warehouse facilities.

“The pandemic also encouraged our company to highlight our in-house processing operation, Christine’s Cuts, and develop items targeting the family household,” he adds. The company also incorporated its own line of fresh-cut fruit and vegetable options through Christine’s Cuts, which Sirna says they will continue to produce after the pandemic.

“Since the peak of the pandemic, we have started to see business come back and our wholesale business recover,” Sirna says, “however, we believe the demand for retail will remain strong.”

Produce Packaging’s Schwab says the spiral and riced produce items blew up a few years ago and “they are still popular, but now people are looking for ‘the next thing.’”

“A lot of people are eating plant-based diets, which is great for the produce industry,” she adds.

DNO Produce’s DiNovo says the pandemic triggered a “huge shift away from bulk type of items, particularly with school customers, to more packaged or ‘touchless‘ items, that reached a crescendo in October-November of last year.”

“We’re still seeing a lot of demand for that single-serve, individually wrapped, grab-and-go type of product.”

DNO Produce is able to manufacture that product in-house, with specialized bagging equipment, and DiNovo adds, “we were at capacity, or bumping up against that capacity, nearly all school season.”

The company is currently planning a 35% expansion of its production capacity, with related equipment, to grow with demand and to reduce labor. “We feel like automation is something we need to invest in.”

Buehler’s Tomassetti confirms more consumers want pre-packaged items or pre-cut fruits and vegetables and are willing to pay a premium for them, such as husked sweet corn wrapped on a tray. “We can’t keep that in stock.”

Kroger Hopes To Boost Numbers Of Fresh Or Local Suppliers

For a grower or small food business entrepreneur, it’s hard to break into the retail produce market. The established network isn’t easy for newcomers to enter, jargon is tough to decipher, and there’s always uncertainty about weather, quality and logistics. Can you guarantee a consistent quantity and quality, and why should a retailer even bother with a small grower when it’s much easier to work with a broker or wholesaler?

But a local grower or food processor has one huge thing in his/her favor: location. Produce customers love supporting local growers and knowing their dollars are benefiting a farm family in their neck of the woods.

This spring, Cincinnati, OH-based The Kroger Co. started a program — the Go Fresh & Local Supplier Accelerator — to encourage U.S. growers and small businesses to work with the retailer.

More than 1,000 local and regional suppliers applied by the May 31 deadline. Since then, in collaboration with Solon, OH-based Efficient Collaborative Retail Marketing Company and its San Francisco-based subsidiary RangeMe, Kroger’s management and fresh director team has been reviewing applications in multiple rounds, selecting 15 finalists (one finalist per region per category) to attend an August pitch session in front of a panel of judges, with one overall winner selected from each geographic region.

And the retailer is making sure that’s not just idle talk. In 2020 alone, it invested $4.1 billion in diverse suppliers — a 21% increase versus the previous year — and it is working to scale that number to $10 billion by 2030, according to Stuart Aitken, Kroger’s chief merchant and marketing officer.