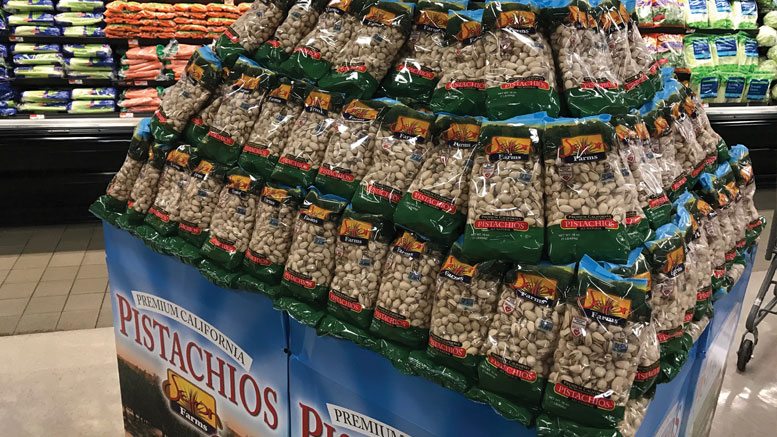 How retailers can prompt consumers to ‘Get Crackin’ at the register.

Picture this: Snooki, the breakout star of hit MTV reality show Jersey Shore, closes a tanning bed onto a pistachio, opens the bed to reveal the crushed nut and plucks the kernel out from the bed and into her mouth. “Snooki does it with UV rays” precedes the ad’s tagline, “Get Crackin.”

These quirky advertisements have been the cornerstone of Wonderful Pistachios’ media campaign for the past few years. This past year, the Los Angeles-based company shelled out $55 million in marketing its pistachios. The investment seems to have paid off. “Wonderful pistachios has had a record year. We’ve grown 26 percent in dollars,” says Adam Cooper, vice president of marketing.

Aided by these celebrity-studded commercials, as well as health and culinary education initiatives, pistachios have increased in both production and sales. California pistachio production has grown more than 70 percent in the past 10 years, according to the Administrative Committee for Pistachios, a Fresno, CA-based federal marketing order that regulates the handling of pistachios produced in California, Arizona and New Mexico. Last year alone, there were more than 200 million shipments of California pistachios abroad and in the domestic market.

Bob Klein, manager of the Fresno, CA-based California Pistachio Research Board, says the United States is projected to surpass Iran, the market’s lead pistachio producer, in the next few years. In 2016, 900 million pounds of pistachios were harvested in California, although the crop is relatively new to the state.

Despite the rapid growth of the California pistachio industry, yields fluctuate dramatically year to year. According to Klein, this year’s crop is projected to be between 250 and 400 million pounds less than that of 2016. Thus, marketing teams, retailers and retail executives must be flexible in their sales strategies.

Pistachios are undoubtedly an impulse buy, so marketers and retailers must emphasize the heart-healthy, protein-packed nature of the nut and its versatility as a culinary ingredient. The nut’s buttery, rich flavor is a great complement to any citrus-heavy or sour dish. Additionally, they add great texture when crushed on top of pasta, meat or fish. Pistachios also provide an ideal crunch in salads and add a savory touch to desserts like chocolate cake and caramel brittle.

According to American Pistachio Growers, an agricultural trade association based in Fresno, CA, pistachios as part of a regular diet can reduce the risk of heart disease. Pistachios are also a good source of monounsaturated fat and are naturally cholesterol-free.

Jay Schneider, produce director for Malvern, PA-based Acme Markets, says health-conscious consumers are aware of the nut’s health benefits, but it is still helpful to go with heart-healthy messaging on packages.

Pistachios are rarely at the top of shoppers’ lists, so it is important to place them in areas that draw a lot of foot traffic.

“As soon as customers walk in, it has to hit them,” says Schneider. “It’s best if we put six to eight bins together with a lot of height to really catch the customer’s eye. Or it could be built off a front end cap display. It can’t be positioned in a random corner or in one little bin. You have to go big and really push it and create an event in the store.”

Chad Hartman, director of marketing at Tropical Foods, Charlotte, says the section for nuts, snack mixes and dried fruit within the produce department is an optimal spot. “If there isn’t a specific section for that, we prefer an end cap next to some produce tables,” he says.

Placing colorful displays around popular produce items can be effective.

“We’ve seen retailers take several of our display shippers or octagonal pop-up bins and line them up around produce sections, near bananas or citrus, to create a display that draws attention,” says Beth Sells, who works in sales and marketing at Keenan Farms, a pistachio processor located in Avenal, CA.

Wonderful’s Cooper says checkout lanes are a great place to bolster sales. “Consumers are looking for healthier options at checkout.”

Pistachios are still sold in bulk at some markets, but bulk pistachios are primarily sold exclusively in conjunction with a bulk department.

“Years ago, some produce departments would have an in-shell pistachio as a stand-alone product, but I don’t see that too much anywhere,” says Hartman.

There are several approaches in determining package sizes and price points. Hartman suggests selling between 4- and 8-ounce packages. “The produce department people expect a certain size and value for the product,” he says. “I think you’re looking at somewhere in that middle range where someone is going to take the package home.”

Schneider likes to offer customers value in accordance with the market. “This year the prices were so favorable that you could run almost 16 ounces for $5,” he says. “I like to target based off the market, whether it be a 12 ounce or 16 ounce for a $5 price point. Some people like to do a club pack for $9.99 because you don’t want to under-value it too much. It’s truly based off the market; each individual retailer has a sweet spot.”

Pistachios are popular with consumers during the holiday season and during Super Bowl weekend. Pistachio companies often capitalize on these natural demand peaks by creating themed displays. To really boost sales, however, retailers and marketers must create their own events apart from the usual festivity-oriented strategies.

“From my experience, with the impulse buyers out there, you can create an event within your store. I’m a firm believer in that,” says Schneider.

To energize store teams, Schneider and his team at Acme Markets run contests and crunch sales data to evaluate different stores and encourage them to continue pushing product. “The biggest thing is when we have a sales meeting with our teams, we’ll ask ‘Who can be the king of pistachios?’” says Schneider. “You have to create friendly competition. It’s a lot easier with pistachios because they’re not perishable. You can really get people behind it. They’re more susceptible to push it a little more. It really adds dollars.”

Specialty variety offerings are another great way to boost sales. Wonderful Pistachios offers both lightly salted and no salt varieties, which ties into the company’s revamped health campaign marketing pistachios as “the fit nut.” In 2018, Keenan Farms will introduce flavored pistachio varieties immediately following the holiday consumer boom, to keep the momentum going. “We will offer both salt and pepper and chili-lime in-shell pistachios,” says Sells.