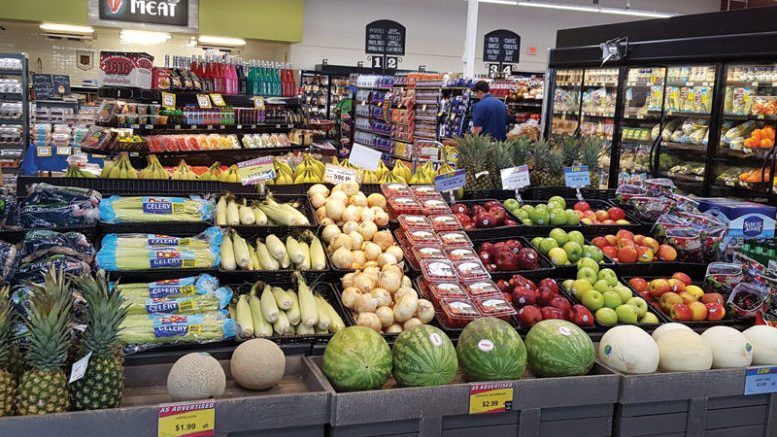 Brick Street Market is a single location supermarket that also includes a restaurant. The approximately 20,000-square-foot business opened just outside the city in Altoona back in April 2014.

“We operate a café or meeting place for people to have coffee or ice cream, but we also have a full menu,” says Reenie Hogan, general manager. The high-volume café seats about 60.

The Iowa Pork Producers Association rated the restaurant’s tenderloin sandwich the second best in the state in 2014.

About three quarters of the operation is devoted to the supermarket, with produce comprising 30 percent of its retail space. Unlike Gateway Market, Brick Street has traditional produce displays.

“Our main focus is salads, which are a big hit, and we have a strong to-go business with our fruit cups,” says Hogan. “What’s nice about having a restaurant in-house is that it’s easy to reuse things, like selling produce in the salad bar to keep items turning and make it as fresh as possible.”

The salad bar, located to the left of both the entrance and produce department, is definitely a focus of this market. It is 8 feet long and includes two soups of the day, three types of lettuce and 20 to 30 toppings.

Produce also is used as an ingredient in the café for a variety of dishes, such as lettuce and tomatoes on burgers and fruit on pizza.

The operation also includes a full-service bakery and local growers selling produce in the parking lot during the warmer months.

“When we first opened, we tried to have a huge variety in the produce department with ethnic items, but these products didn’t sell,” says Hogan. “Our customers are not looking for specialty items, but if they ask for something we don’t carry, we’ll try to bring it in.”

During the holidays, the store has a decent fruit basket business. It also runs a floral shop in a separate, but attached, building that is leased by another owner.

With the wait continuing to grow at its restaurant, Brick Street may expand its foodservice operations in the future. “This may also include the produce department,”
says Hogan.