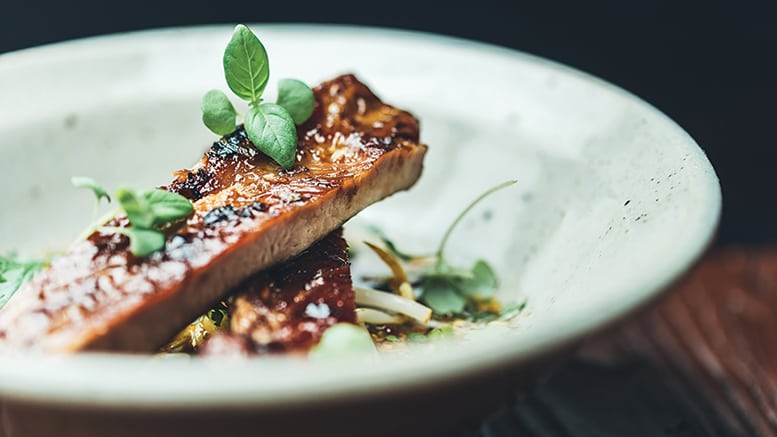 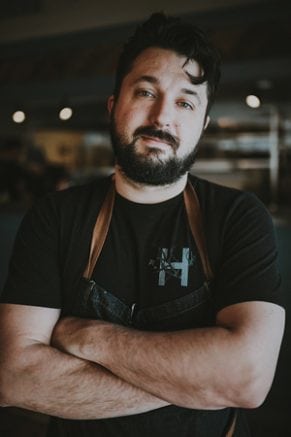 Produce plays either a starring or supporting role in nearly all the small plates offered on the menu at Harbinger, a year-old restaurant located in Des Moines, IA, and owned by Chef Joe Tripp.

One reason is the Asian inspiration Tripp brings to the table, especially from his recent three-week solo culinary exploration around Vietnam. However, the soul of the cuisine served by this Des Moines native and three-time semifinalist for the James Beard Foundation Award for Best Chef: Midwest is rooted in the heartland of Iowa itself. That is, locally grown fruits and vegetables are a signature feature and served year-round, either fresh in the summer months or preserved in the winter.

“Hyper-seasonal is a real focal point for us and it reflects who we are and the place we call home,” says Tripp. “For example, we took about 40 pounds worth of green garlic this spring and fermented it with a little salt and Korean chili powder. This fall and winter, it might be the base for a spicy chutney in November or green garlic aioli in January. Last year, we put away 56 Mason jars of fruits and vegetables and plan to expand on this for the season ahead.”

A Des Moines native, Tripp studied psychology and philosophy at the University of Iowa and worked at a fine-dining restaurant after classes. He graduated in 2008 — the year the economy tanked — and decided to take a year off before attending graduate school. To that end, he moved to Denver to attend culinary school, yet serendipitously scored a more informal way to learn the trade by working under James Beard Award-winning chef Alex Seidel at his farm-to-table restaurant, Fruition Farms in Larkspur, CO. Milking sheep, as well as selecting rainbow beets and heirloom tomatoes, in addition to his kitchen duties gave Tripp a hands-on back-to-the-roots sense of the power of fresh ingredients. 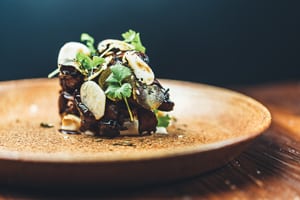 “We source our fresh produce in a couple of ways,” says Tripp. “First, I go to the Downtown Farmers’ Market twice a week. Secondly, FarmTable Delivery picks up and delivers from farms that are in the Northeast or Northwest of the state. Third, we use foodservice distributors like Loffredo’s here in Des Moines or Reinhart in [Rosemont] Illinois for items we can’t source locally, but that’s not a lot. For example, we don’t use much citrus at the bar in favor of flavors we can get or make from local ingredients.”

Examples of selections on the ever-changing menu include starters such as Green Tomatoes breaded in local cornmeal and served with pig’s ear, relish and buttermilk; Squash Blossom Rangoon with Chinese mustard, sweet and sour tomatoes and purslane; and an Asian take on the Des Moines’ restaurant scene’s omnipresent polenta and tomato sauce in the form of Tapioca and Pecorino fritters with spicy tomato sauce and cilantro. Other menu selections include Grilled Romaine dressed with black garlic vinaigrette, slow-roasted strawberries, Feta and lovage; and English Pea gnocchi with house-made ricotta, pine nuts, snap peas and their tendrils. 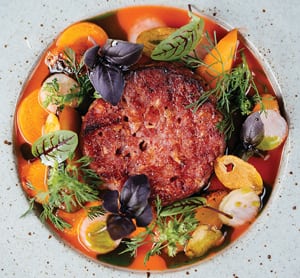 “The food scene in Des Moines has really changed a lot. In fact, I’d love to see and think it’s possible we’ll see seven to eight chefs in the city make the James Beard Awards list in the future,” says Tripp.