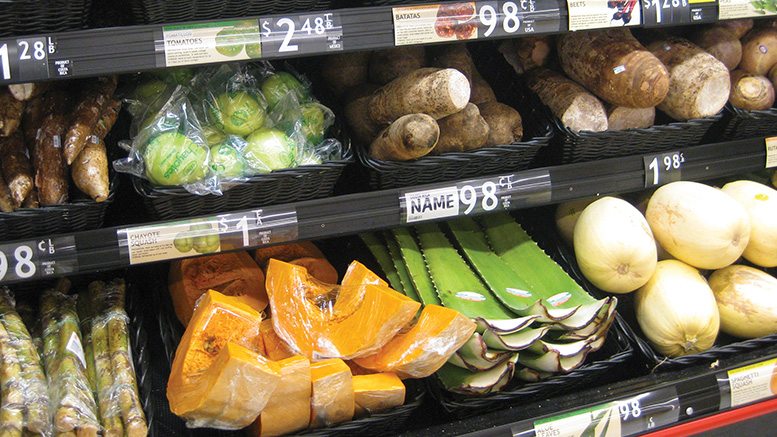 Bananas and pineapple may be the mainstream choice for consumers, but there are big promotion possibilities with jackfruit and other fruits. 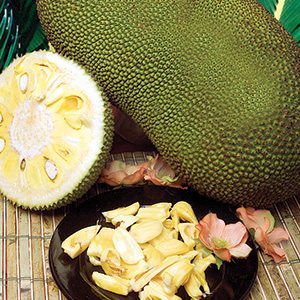 Fruits dominating produce sections in the winter typically include apples, pears, grapes, and berries, while summer sees promotions of peaches, nectarines and plums.

But retail executives who want to liven up their produce departments while also giving sales a boost should look to the tropics, because putting the spotlight on tropical fruits can add color, excitement, and taste to the section.

“They are what make a produce department exciting,” says Melissa Hartmann de Barros, director of communications at HLB Specialties, Fort Lauderdale, FL. “Staple items are important to retain customers and to grow; tropical exotics are important for excitement and growth, as well as staying relevant.”

Dionysios Christou, vice president of marketing for Del Monte Fresh in Coral Gables, FL, says focusing on tropical produce makes sense because it already appeals to shoppers. “These tropical fruits and vegetables are popular in produce departments due to consumer interest in health and wellness, as well as the growing interest in new and exciting tastes and flavors from around the world,” he says.

Jose Rossignoli, director of global sourcing for Robinson Fresh, Eden Prairie, MN, says there are more than 20 fruits that should be grouped in the tropical category. “The core commodities of avocados, pineapples, mangos, limes comprise more than 90 percent of tropical sales, followed by pomegranates, papaya, and kiwi, which compose another 8 percent together,” he says.

Hartmann de Barros notes tropical fruits fall into two categories — regular exotics and ultra-exotics, and that the ultra-exotics category offers an opportunity to boost sales. “Depending on the retailer, their focus is usually on both or regular exotics, as ‘ultra-exotics’ have a smaller market share,” she says. “But it’s those ultra-exotics that catch consumers’ eyes and make them curious. Having sample stations would be ideal to introduce those exotics.”

According to Alex Jackson Berkley, senior account manager at Frieda’s Specialty Produce in Los Alamitos, CA, jackfruit and dragon fruit are two key specialty tropical fruits. Jackfruit is known as the largest fruit grown on trees. Its taste has been compared to pear, pineapple, banana, and papaya. It also is used in savory dishes, as unripe jackfruit is said to have a taste and consistency similar to meat, leading to its use in curry dishes. Dragon fruit is a sweet, crunchy fruit whose flesh resembles a white or red melon with black, edible seeds. “These items are visible in retail and foodservice industries, so shoppers are pleased to see them available regularly,” says Berkley. “The next group of popular specialty tropical items includes cherimoya, rambutan, and lychee. Since not all of these items are available year-round, it is important to maintain as much variety as possible.”

Bananas and pineapples are the most popular tropical fruits, but the produce department can be livened up with the flavors and colors of many other fruits all year long.

Rossignoli says bananas are usually treated as their own category because of the size and scope of the banana industry; even the fruit is, by definition, tropical. “That said, after bananas, pineapples, and avocados are the biggest sellers of the tropical category, with mangos and limes being next,” says Rossignoli. “Papaya tends to rank sixth or seventh, depending on the geographical region of consumption. Rambutan and lychee are considered exotic items, and the future growth is promising thanks to the ongoing demographic changes in the U.S. consumer base.”

Hartmann de Barros notes that limes, mangos, Golden Solo papaya and large Formosa papaya are in season year-round and are always ripe for promotion. “It’s also a great opportunity to promote new tropicals, such as yellow pitahaya from Ecuador, which is very sweet,” she says. “Pitahaya is from the family of the dragon fruit, but it has more than double the brix and has a great shelf life. It’s also a powerful digestive aid.”

“Winter has a good upswing as people like to have tropical fruit during the cold weather, as it could remind them of tropical summer holidays.”

Hartmann de Barros also praised rambutans, which are small fruits popular in countries such as Malaysia, Thailand and the Philippines. It’s not as well-known here, and the fruit’s appearance, with its hair-like stems, makes it an exotic fruit that can be promoted for its taste and health benefits. “Rambutans are also a good item to promote when they are in season because they attract a lot of attention and their taste is incredible: sweet and juicy; plus, it’s a great snack item,” she says.

Rossignoli adds that increased sales on limes, avocados, mangos, and papayas are expected next year. “Early indicators point to higher volumes of pineapples coming out of Costa Rica and Mexico, as more pineapple crops are being planted,” says Rossignoli. “However, China recently opened its doors to receive pineapples from Costa Rica. This means that although there will be more pineapples grown in 2018, they may not all be going to the United States. Because of Robinson Fresh’s global reach, we anticipate larger than normal growth on our pineapple program in 2018.”

Make it a Destination 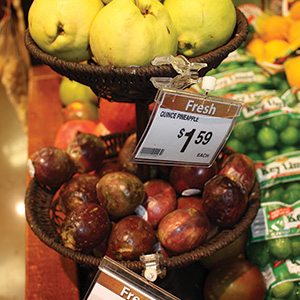 Pineapples are one thing, but lesser-known tropical fruits, even reasonably well-known examples such as mangos, present a challenge. If shoppers aren’t familiar with a fruit, they can be hesitant to try it.

Berkley says bananas can serve as an introduction to other tropical fruits. “The tropical display carries the bananas, which is an everyday item for most shoppers,” she says. “While they are at the banana display, make it a destination with the varieties of tropicals for shoppers to explore. Whatever they add to their basket will increase the overall ring of the basket for that trip, while also providing that shopper with a fun food experience.”

Hartmann de Barros suggests using the country of origin as a selling point.

“If possible, include a story of the grower or growing families, how they have been involved and invested in the production of the product and making sure it tastes as great as it looks,” she says. “Having a personal story that goes along with the things they consume, especially when it’s imported tropical fruits, is a great tool to connect the consumer with the product they are buying.”

She adds that including information, such as choosing the right fruit and knowing when it’s ripe, is “crucial” to selling exotics. According to Hartmann de Barros, exotics should be displayed at 50- to 75-percent ripeness in large displays near the entrance of the produce section. Another suggestion is to offer samples. “Health benefits always help,” says Hartmann de Barros. “What is needed is education, as most consumers are not familiar with all the different tropicals and their health benefits — especially if they didn’t grow up with them.”

Shoppers — both young and old — can be sold on tropical fruits, according to Hartmann de Barros Offering organic fruits and promoting health benefits can help with sales to Millennial shoppers, while promoting the exoticness of these fruits can appeal to all ages. “Some older shoppers may have traveled more and remember eating papayas or rambutan on their vacations, so it depends,” says Hartmann de Barros. “Including a story of the product seems to be a much stronger selling point because it creates a connection.”

Rossignoli says providing consumers, especially Millennials, “a purpose to entice their purchase decision is also important. Therefore, advertising components of environmental and social responsibility associated with the products increase the relevance of the item.”

Social media is another tool for promotion. “Facebook and Instagram are so helpful, and we do see retailers making a jump into social media,” says Hartmann de Barros. “But there is always room for improvement, such as more POS material, including recipe ideas or eating instructions on the retailer’s apps, etc.”

Tropical fruits are not only delicious and healthy, but their potential uses are also boundless.

They can be featured in just about any course of a meal, from salads to desserts, offering opportunities for cross-promotion.

“Changing it up in unexpected ways can generate excitement and curiosity. Pairing limes with papaya is common,” she says. “How about pairing papaya and yogurt, papaya and cereal, papayas and blueberries, to create a papaya boat? Instagram has great ideas for papaya boats with many different produce items.”

Another option is to mix things up and to spread out tropical offerings so customers don’t get tired of one particular fruit.

“Changing things up helps keep the excitement going with retailers,” says Hartmann de Barros. “Promotions are usually a good method for doing that, as different tropicals jump out if promotions are done separately to each other.”

Demand for these fruits is sure to increase as consumers come to appreciate that tropicals include far more than bananas, pineapples, and avocados.