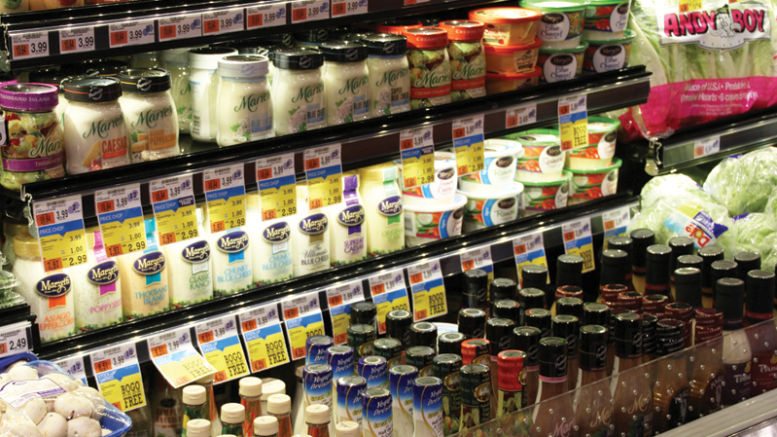 As more consumers shop supermarkets’ perimeters looking for fresh produce that can be prepared with minimal effort, dressings have become more prevalent in today’s produce departments. This includes vinaigrettes, yogurt-based, Mediterranean flavors and spicy and traditional favorites, such as Ranch and Blue Cheese.

The refrigerated salad dressing category has grown by $24.4 million over the last year, while the shelf stable dressing set has declined by $20 million in the 52 weeks ending Feb. 21, 2016, according to a joint report by research firms Nielsen in New York and IRI in Chicago.

Salad dressings have a long history that dates back to the Babylonians, who used oil and vinegar for dressing greens nearly 2,000 years ago, according to the Atlanta-based Association of Dressings and Sauces. In the twentieth century, Americans began using oil, vinegar or lemon juice, and spices to create a variety of dressings to complement salads. Many of the major brands of salad dressings available today were on the market as early as the 1920s.

In recent years, the healthier dressings have been driving growth in the refrigerated dressing category. “Organics are the fastest-growing segment, with sales up 50 percent over last year, and Greek yogurt-based dressing sales are up 40 percent over last year,” says Camille M. Balfanz, brand manager at Litehouse Foods, headquartered in Sandpoint, ID. “Within the remaining segment, Ranch and balsamic are the fastest growing RSD (refrigerated salad dressing) flavors.”

Although refrigerated dressings are carried in the stores’ produce departments, these products are not managed in the same way as other products. “The refrigerated salad dressing category lives in my department, yet I don’t order or watch these products,” says Jeff Fairchild, director of produce at New Seasons Market. “The grocery director handles these items on a store-by-store basis.”

When looking at the RSD category, it’s important to note consumers’ perception of healthfulness is shifting. Consumers are more concerned about the ingredients they are finding on labels than they are about traditional health claims, like calorie counts.

For Marzetti, it’s the vinaigrette segment that is growing. “Consumers want ingredients they recognize, like extra virgin olive oil, red wine vinegar and Parmesan cheese without added preservatives, MSG or high fructose corn syrup,” says Mary Beth Cowardin, director, brand marketing – Marzetti brand for T. Marzetti, based in Columbus, OH. “And vinaigrette dressings are generally lower in calories than other creamier dressings.” Manufacturers report yogurt-based products also continue to perform well, due in part to the health halo of yogurt as an ingredient. “In the 12 weeks ending in mid-February, yogurt-based product sales increased by 22 percent over the previous year,” says Cowardin.

“In the 12 weeks ending in mid-February, yogurt-based product sales increased by 22 percent over the previous year.”

At the same time, traditional products have a strong place in the market. “Ranch, Blue Cheese and Caesar still account for almost two thirds of all dressing sales,” says Cowardin. “Consumers like the tried and true, and these dressings are versatile and often the gateway to consumers trying new foods.” Packaging formats for these products are changing, as consumers demand more convenient, healthier and sustainable options from manufacturers.

For example, Litehouse uses a glass jar because consumers perceive it to be high quality and environmentally friendly, while keeping its product fresher, healthier and more flavorful, according to a February 2015 qualitative focus group report conducted by Ipsos and commissioned by Litehouse.

In the RSD category, when it comes to sales, much depends on placement and effective cross-merchandising. Tom’s Market, a single-store operation in Freeburg, IL, merchandises its refrigerated dressings in the cold case alongside prepackaged salads. Brands include both Marzetti’s and Litehouse. The store occasionally will hold promotions with its dressings, putting shippers’ display cases up when they’re on deal. “It has been very effective to have these products next to all of our prepacked salads in the grab-and-go case,” says Ken Carel, produce manager.

Produce departments have become table stakes for grocers, who are seeking RSD products that reflect and meet new consumer demands for freshness and label transparency and that support a balanced healthy lifestyle. “Bottomline, retailers need new and distinct products that will resonate with current trends and provide consumers with a variety of choices,” says Cowardin.

Merchandising within the RSD set is all about catching the consumer’s attention during the produce shopping occasion. Placement next to bagged salad is the classic approach, although some retailers are now adding secondary placement of organic dressings next to organic salads when there is a separate placement for organic produce. “This really drives the message to the consumer to top their salad with the same quality of ingredients as they put in their salad,” says Litehouse Foods’ Balfanz. “This convenient consumer solution also drives a higher ring for the retailer. The fact is that as consumers focus more on fresh, there is a squeeze for refrigerated space around the perimeter.”

In addition, cross-merchandising that takes into consideration timely themes and relevant food pairings works well.  “Consumers are often looking for new ways to consume produce so doing that extra work to inspire them through creative meal time recipes or innovative snack ideas can go a long way,” says Bolthouse Farms’ Lange. “Most often, produce items such as pre-packaged salad, coleslaw and shredded veggie mixes are cross-merchandised with salad dressings as well as raw, whole veggies and pre-package veggies.”

The RSD category is uniquely positioned for growth, as it complements the entire produce section, while offering convenient solutions for consumers and driving sales for the retailer. “The RSD category is perfectly positioned for retailers to leverage fresh solutions,” says Balfanz. “As consumers buy more produce and read more labels, the refrigerated salad dressing set is a natural choice to complement fresh fruits and vegetables.”

Recently, there have been a number of new brand extensions and products geared to expand the uses and buying opportunities for refrigerated salad dressings.

“These two lines are bringing new people into the category and are on-trend with consumer desires to consume more fresh, locally sourced produce, for clean labels and for overall health and balance,” says Mary Beth Cowardin, director of brand marketing for Marzetti.

Greek yogurt is a $7.4 billion business, according to UK research firm Mintel.

This relates directly to produce, since the Greek yogurt consumer is four times more likely to purchase items from the produce department than the average consumer, based on a report by Singapore-based SPIRE.

In response to this trend, manufacturers are expanding refrigerated salad dressing lines. In addition to Litehouse Foods’ newest flavors, which include Avocado Ranch with Bacon, Organic Rosemary Balsamic, and Organic Ginger with Honey, the company has added to its Opa Greek Yogurt line.

“OPA by Litehouse was launched in 2013, and it has seen tremendous growth since then,” says Camille M. Balfanz, brand manager at Litehouse Foods, headquartered in Sandpoint, ID. “Over the last year, OPA has grown more than 40 percent, while non-yogurt dressings have grown 4 percent.”

Earlier this year, the line was expanded to include pourables in Strawberry Poppyseed, Tzatziki Ranch, Roasted Garlic, Avocado Cilantro, and Curry flavors.

Usage occasions for these products have expanded in recent years. For example, Makoto Dressing products are used as both dressings and marinades. “Our ginger dressing is popular as a marinade for beef, chicken, seafood, pork, etc.,” says Charles “Buzzy” Blyer, sales manager of the Melbourne, FL-based company. “Consumer research is revealing the Millennial generation is looking for zesty and spicy products for their salads.”