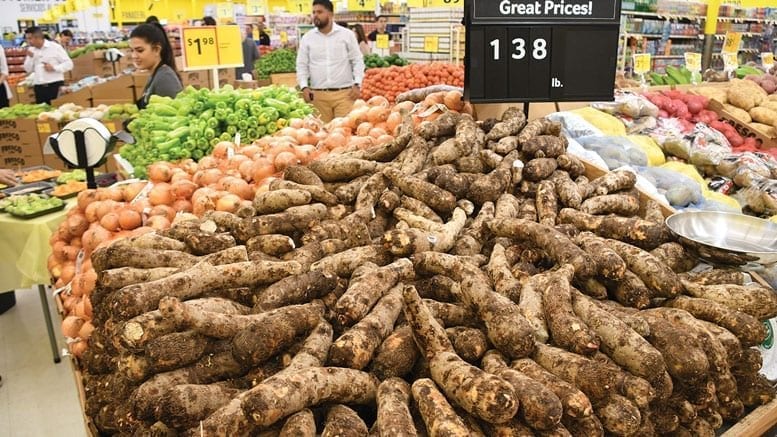 Retailers need to stay abreast of trends and communicate reasons for consumers to buy.

Getting to the root of sales may not seem earth-shattering. Yet, these underground-growing veggies, everything from mainstream staples such as potatoes and carrots, to grandma’s favorite rutabagas and turnips, and even ethnic favorites such as cassava and daikon, can collectively add green to the register.

This is true year-round — driven by celebrity chefs spotlighting the latest root recipes on food TV — as well as the 52-week availability of these hearty veggies. Root’s register-ringing ability also ramps up in the winter, when these vegetables star as comfort ingredients on holiday menus, and when cold weather drives consumers to hearty, root-filled soups and stews. The trick to digging up added dollar sales is for retailers to stay on top of the trends in this often-unsung category, and translate this ‘why buy’ to shoppers.

“We have a year-round program on various root vegetables,” says Blake Lee, director of produce procurement and merchandising for Bristol Farms, a 13-store chain based in Carson, CA. “As consumers become more aware of the benefits of food, we tend to see an increase of whatever seems to be trending at that moment. For example, horseradish seems to be gaining traction, as does celery root during the holidays. We’ve also ramped up displays on the various radish varieties to draw attention to the multitudes of color and appearances.”

LATEST ON THE GREATEST

Potatoes, onions and carrots ranked among the Top 10 vegetable categories at retail in 2018, according to FreshFacts on Retail, Year in Review, by the Washington, DC-headquartered United Fresh Produce Association. More specifically, these three root vegetables represented about one-third (31.9 %) of the dollar sales generated by all 10 top veggie categories.

“Based on sales and velocity, potatoes, onions, carrots and sweet potatoes are the mainstream root vegetables of today,” says Rachel Atkinson-Leach, category manager for RPE, Inc., in Bancroft, WI. In fact, “potatoes, onions and carrots make up 97% of root vegetable volume.”

Earl McGrath, produce director for independent retailer Freshfields Farm, in Orlando, FL, which has a second location in Jacksonville, FL, says potatoes “are still king of the roots, in spite of the ever-changing plate of your average customer.”

This fall, RPE will introduce an extension to its bite-sized potato line with Tasteful Selections Nibbles, the world’s smallest gourmet potato.

Stokes Purple sweet potatoes are a seasonal favorite, according to Sadie Carpenter, marketing manager for Frieda’s Specialty Produce, in Los Alamitos, CA. “These, as well as colorful carrots, are among our top-selling root vegetables for fall.”

Colorful or rainbow-colored carrots are currently one of the biggest root vegetable trends, says Robert Schueller, director of public relations for Melissa’s/World Variety Produce, in Vernon, CA. “We’ve seen a 15% increase in sales over the past year, primarily for use on veggie trays and as a lunch snack.”

Rainbow carrots are gaining popularity as consumers look for variety and visual appeal to Instagram, and organic and conventional baby carrots continue to be a favorite with consumers, according to Phil Kooy, chief customer officer for Bolthouse Farms, in Bakersfield, CA.

Interestingly, although carrots can be harvested in the summer and are available year-round, they reach peak sweetness in fall and winter as colder weather causes carrots to convert stored starches into sugars to keep the water in their cells from freezing. This makes carrots taste extra sweet, says Kooy.

Beets are currently among the ‘hottest’ root vegetables, says Kevin Partida, manager of the vegetable department at Vision Produce Company, in Los Angeles. “Chefs use them a lot and like the variation in colors to light up plates visually and with taste.”

Color is what makes the watermelon radish popular and led to a 21% increase in sales over the prior year at Melissa’s/World Variety Produce, according to Schueller.

The French Violet Radish is a fairly new root item for Babe Farms.

“Similar to the classic French Breakfast Radish in look and shape, the striking, purple hue of the French Violet Radish is what sets it apart,” says Hiltner.

Like beets, chefs have pushed the popularity of celery root and parsnips, according to Frieda’s Carpenter, with these two roots now appearing on most fall/winter menus.

“We only carry parsnips a few months of the year, but we have significant interest with them in the cooler months,” says Freshfields’ McGrath.

Celery root is mainly sold without tops and in 25-pound bags by Lakeside Organic Gardens. “But during the winter holiday season, we provide a special pack, 12-count root with tops for retail,” says Marliese McWherter, creative marketing manager.

“With potatoes and other roots, it’s important to include some nice color breaks so that the section doesn’t become a run-on sentence of browns and plastic bags.”

Yuca, which is the root of the cassava plant, and malanga, similar but different from taro, are the up-and-comers in the root vegetable segment, driven by their versatility and similarity to potatoes, according to RPE’s Atkinson-Leach. This is because they can be used as an ingredient in everyday meals, as well as in many multicultural recipes.

“Yuca and malanga peak for us in winter months, especially around the holidays,” says Freshfields’ McGrath. “One informal promotion we do with our Latin root vegetables is to look across the entire marketplace and focus on one root each week that we think will present the best overall value for our customers.

“We will increase the display size by two to three times and visually draw in customer interest. If we are successful with promoting in this way, we end up giving our customers good value on top-quality fresh produce. ”

Yuca and malanga blanca are the first- and second-most consumed root vegetables in Latin America, according to Jesse Capote, principal and executive vice president of J&C Tropicals, in Miami, which sources these and other tropical roots from South Florida, Costa Rica, Ecuador and Honduras.

“These items are consumed year-round, although they spike in sales in the winter,” he says.

“For one, most tropical root vegetables are consumed in soups and stews, so the colder weather has a big impact on demand. Second, everyone in America eats more during the holiday season. It’s no different with all ethnicities. Cubans consume malanga blanca and boniato during holidays. Puerto Ricans consume malanga lila and Ñame blanco. Chinese consume large taro and Ñame blanco,” says Capote.

Beyond these, Melissa’s/World Variety Produce’s Schueller says his company has seen 7% and 8% increases on daikon and jicama, respectively, over the past year. Demand for both, he says, now reaches beyond solely an Asian and Hispanic customer demographic.

Minimal seasonality makes root veggies ideal to feature year-round. However, November sees a 1.3 times spike in volume sales versus the category average, according to Nielsen data as provided by RPE. This makes the fall, as well as the colder months of the winter, an especially good time to maximize sales by building appetizing displays and offering delicious dish ideas.

“For consumers, the appearance of root vegetables in stores signals a change in season, the beginning of fall, start of the holiday season and the colder winter months,” says Bolthouse Farms’ Kooy.

However, root vegetables aren’t typically the most visually appealing section in a fresh produce department.

“With potatoes and other roots, it’s important to include some nice color breaks so that the section doesn’t become a run-on sentence of browns and plastic bags,” says Freshfields’ McGrath. “With proper time spent merchandising, however, you can actually have a root section with vibrant color. Carrots, radishes and beets with tops still on are some of my favorites, as they are a pop of vibrant color that can catch customer’s attention. You really can have an impulse purchase even with a radish if it looks great.”

Tie roots together with traditional usages.

“Understand consumer recipe usage behavior, and cross-merchandise carrots with other key ingredients, like beef for stews or chicken for soup,” says Bolthouse’s Kooy. “For the Thanksgiving holidays, displaying carrots with other holiday ingredients — such as sweet potatoes, celery and pecans — makes it easier for consumers to gather all components for their meal at one place.”