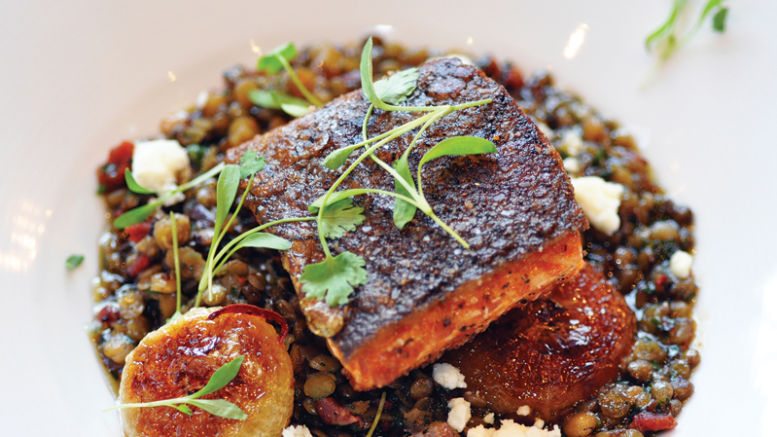 Microgreens and edible flowers are far from a “new” produce item. The baby seedlings and blooms have been consumed in one form or another since humans first farmed. They did not become a “thing” until upscale California restaurants started using them in the 1980s.

To the outside world, the itty bitty herbs and greens that are tweezed onto dinner plates as “vegetable confetti” seemed a little precious. However, chefs understood these brightly colored, subtly flavored, fresh produce items augmented the arsenal of ingredients at their disposal. And that was before anyone looked seriously into microgreens’ nutritional resume.

Now the category is a related array of crops including “petites” (which are bigger microgreens), shoots (or tendrils), micro vegetables and edible flowers. Some are delivered to retail and foodservice ready to use and others arrive ready to be “harvested” as needed.

Microgreens are not sprouts. The latter are germinated in water in low light long enough to grow roots, a stem and pale leaves — a process that has made sprouts susceptible to health safety issues in the past. Microgreens are planted in a sterile-growing, medium soil in sun (or under lights) until they have their first set of leaves.

A culinary trend, microgreens and their relatives are likely to influence diners’ produce shopping habits in the future. In a recent National Restaurant Association (NRA) survey, 51 percent of chefs predicted micro vegetables/microgreens will be a “hot trend” at eateries in 2016. Fully 63 percent of the chefs also indicated that uncommon herbs (such as lovage and chervil) would make an impact.

Since they are ready-to-eat and cooking optional, tiny greens are finding a home in foodservice atop hot, artisan Neapolitan pizzas, on grilled fish tacos, and a range of dishes from tomato soup (topped with micro basil) to a roasted walnut tart (with micro chocolate mint).

When David Sasuga opened Fresh Origins 21 years ago, few people knew what “microgreens” were except some chefs. “When we started out we had maybe five varieties, and now we have more than 100,” says Sasuga, owner of the San Marcos, CA-based company, one of the largest suppliers of microgreens and edible flowers in North America. The tiny crops require a lot of infrastructure in the company’s nearly 1 million-square-foot facility.

“Microgreens are such a fast crop. Most grow in five to seven days. The challenge is to prevent them from becoming ‘leggy’ with long flavorless stems,” says Sasuga. Microgreens must be packaged and shipped quickly with environmental controls from farm to restaurant.

“Much of the growth in the category has come from upscale restaurant chains that are more casual,” he says. Fresh Origins microgreens and flowers are served at The Capital Grille, Roy’s, Nobu, and at Darden restaurants such as Seasons 52.

The Right Microgreen For the Right Job

Rosa Provoste, executive chef at Leonora in The Sebastian hotel in Vail, CO, has mixed microgreens emotions. “Microgreens and edible flowers are expensive and easy to ruin. They are very sensitive to changes in temperature, light and humidity, but I love them for the flavor and color they add to a dish,” she says.

“I only like certain ones. Not every micro green goes with everything. I use micro cilantro in ceviches and tacos. I don’t use them in the Spanish dishes, because they are too strong,” she says. Leonora’s Skuna Bay salmon comes with lentil ragout, Spanish Blue Cheese, Cipollini onions and micro parsley.

Leonora’s tapas range from steamed mussels with speck, fennel and tomato-saffron broth to a potato omelet with caramelized onions and saffron aioli. “I take micro radish and toss it with chopped parsley and sprinkle it on all the tapas when they go out,” she says.

Irvine, CA-based Urban Produce started shipping certified organic produce in 2015 from its facility built around a patented high-density vertical growing unit inside a warehouse, according to Danielle Horton, director of marketing and food safety. Grown indoors in a 5,600-square-foot, 25-feet-tall space, plants move from seeding in the “substrate” through a serpentine conveyor belt, various light tunnels, and watering stations until harvesting and shipping.

“I take micro radish and toss it with chopped parsley and sprinkle it on all the tapas.”

Each micro green from arugula to sunflower is grown separately and then added to various mixes such as Urban Produce’s organic Hot Mama Blend, Wasabi-Bok Choy Blend (popular with sushi bars), and Kale-fornia Blend used at juice bars, which also order harvested wheatgrass packed in clamshells. “One clamshell equals about 1 ounce of wheatgrass juice,” says Horton. Urban Produce varieties are distributed to supermarkets in California, Arizona and Nevada, and to foodservice operations. “Most of the restaurants are white tablecloth places, but some blends go to large foodservice caterers,” she says. Horton noted Indian restaurants like using micro sorrel and bars muddling cilantro microgreens in beverages like the “Man Mosa,” a blend of beer and orange juice with a cilantro garnish.

“We can work with a chef to create a blend grown for them and put their name on the label,” she says.

Microgreens’ growing reputation as a nutritional powerhouse have made some varieties a common ingredient in demand at health-focused cafes and juice bars, along with retailers such as Whole Foods Market. 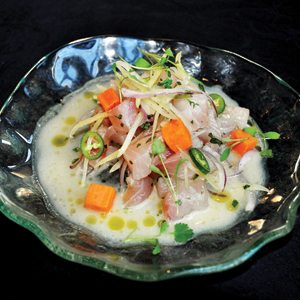 Ceviche Mixto at Leonora
(Photo Courtesy of the Sebastian)

A USDA Agricultural Research Service report published in 2014 noted that among 25 varieties of microgreens tested, “red cabbage, cilantro, garnet amaranth, and green daikon radish had the highest concentrations of vitamin C, carotenoids, vitamin K, and vitamin E, respectively. In general, microgreens contained considerably higher levels of vitamins and carotenoids — about five times greater than their mature plant counterparts — an indication that microgreens may be worth the trouble of delivering them fresh during their short lives.”

However, as the USDA report noted, the growing, harvesting, shipping and storage of microgreens can have a considerable effect on their nutrient content.

While sprouts are naturally the main event at Rochester, MA-based Jonathan’s Sprouts, shoots are emerging fast. “The No. 1 seller is pea shoots, followed by sunflower shoots,” says Liz Reilley, vice president of sales and marketing.

An advantage to pea shoots is they are one of the most hardy and least perishable microgreen, and they can last two weeks or more with refrigeration. “Shoots are really popular, because you can cook with them and won’t wilt. One chef recently cooked with wilted pea shoots instead of spinach as a bed underneath broiled halibut,” says Reilley.

‘Nothing Is Just a Garnish’

At Chicago’s award-winning Blackbird restaurant, microgreens and edible flowers are often used, but never indiscriminately. “It’s common to see microgreens just kind of thrown on the plate. Here, if it doesn’t have a purpose, then it doesn’t go on the plate. Nothing is just a garnish. When we use microgreens we don’t mess with them and add a lot of seasonings,” says Blackbird chef Ryan Pfeiffer.

The eatery’s foie gras dish avoids the almost inevitable sweet fruit or sauce accompaniment. “We use microgreens like anise hyssop, lemon balm and others to suggest sweetness. It’s a cleaner, less heavy approach,” he says. Edible flowers also play a strong role on Blackbird’s menu. “We use a lot of actually edible flowers like chive blossoms. They add depth to the flavor. We grow a lot of our own, use local farms, and order through distributors,” says Pfeiffer.

Camilo Peñalosa, vice president for business development at Miami-based Infinite Herbs, differentiates between types of edible flowers. “Most are not eaten and are primarily used as a garnish. Other ones, like lavender blossoms, are put on tables at weddings because they smell nice,” he says. 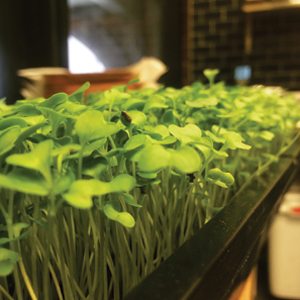 Most of the microgreens and edible flowers served at the signature The Med restaurant overlooking the Pacific coast at the La Valencia hotel in La Jolla, CA, are sourced from Fresh Origins, says executive chef James Montejano. “We mix varieties and use some on almost every dish at the restaurant. I serve grilled fish in dashi broth with micro cilantro and petite fines herbs for omelets,” he says. Among his favorites are micro mustard dijon, micro celery, micro fennel, micro ice plant, micro hearts on fire and micro sorrel.

Defining the Micro, the Petite & the Baby

In the produce and foodservice industries, there is general agreement on what defines microgreens, shoots, tendrils, petites and micro vegetables, but the terms lack any legal definition. “The terms ‘baby greens’ and ‘microgreens’ are marketing terms used to describe their respective categories,” according to a 2014 report by the horticultural sciences department at the University of Florida. Down the line, these definitions may need to become more uniform for the category to grow. Looking to the future, Peñalosa of Infinite Herbs expects the heavy packaging for herbs and microgreens to become more “green” and effective at keeping them in prime condition longer.

“It would also be good if the microgreens came in small sampler packs of individual microgreens, not pre-mixed,” he says. At Urban Produce, the goal is not to build a larger facility in Irvine, CA, to supply microgreens. “The goal is to take our technology across the country to help provide access to fresh produce,” says Danielle Horton, director of marketing at Urban Produce. Their system works well in factories, a resource in plentiful supply, she says. While microgreens won’t replace their full sized siblings, opportunities are abound. “Even though the market for microgreens has grown it’s still a small, obscure category,” says Sasuga of Fresh Origins, indicating lots of potential. Microgreens may be obscure now, but consider the kale’s makeover. “Ten years ago, kale was mostly a garnish,” says Horton. “Now it’s a superfood.”

On the opposite end of the volume scale is MicroGirl Organics in Dubuque, IA, owned and operated by its employee, Laura Klavitter.

“It started with a conversation with a chef in town about farming. I come from a community gardening background. He said that if I could grow microgreens he would buy them,” says Klavitter.

A whole lot of research later, she was raising organic microgreens under lights in her basement in downtown Dubuque.

“Microgreens are cool, because it’s one week from planting to harvest. It’s easy to try new ones. To me there’s nothing better than when a chef geeks-out over my microgreens and finds ways to use them,” she says.

Klavitter plants about a dozen varieties at a time including kales, pea tendrils, arugula and basil. The plants in their sterile growing medium are delivered to the restaurant and cut as needed.

“The low risk, low cost of entry is very appealing, especially for women who want to start a small business,” she says.

The chef who supported MicroGirl’s launch was Kevin Scharpf, owner of Brazen Open Kitchen + Bar down the street from Klavitter’s “farm” in Dubuque. Scharpf was recently named as one of FSR magazine’s “40 Rising Stars under 40.”

“This arrangement allows me to support a local business, and I’m not paying for shipping from three states away,” says Scharpf. He quickly spread the word to other chefs.

Scharpf uses micro basil on coffee-braised beef short ribs with cauliflower “grit” and roasted carrots, and micro Thai basil with seafood. “Micro radishes have a nice stem that stands up to heat,” he says.

“I’m also a big fans of shoots, especially popcorn shoots. They have a pale yellow color. The stem is a little bit sweet and the leaves have just a hint of bitter.”