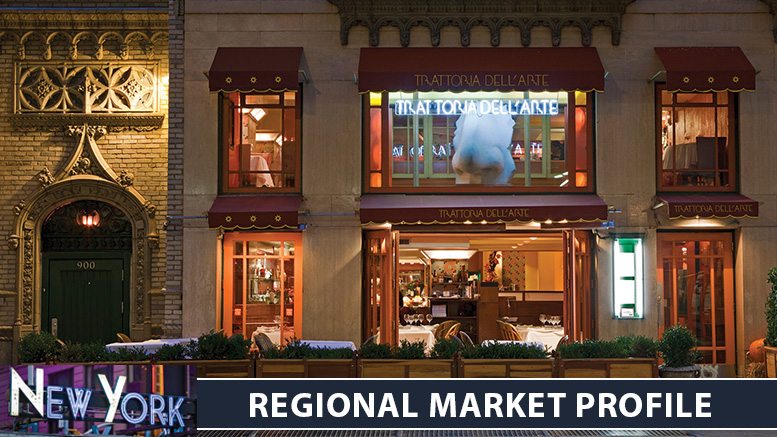 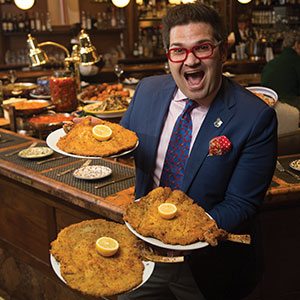 Trattoria Dell’Arte is one of the most unique Italian restaurants you will find, in a city filled with uniqueness. This restaurant, one of owner Shelly Fireman’s crown jewels, offers fresh cuisine and a spirit as vibrant and varied as the residents of New York City, mixed with a sense of grandeur that you would expect from one of Carnegie Hall’s neighbors. PRODUCE BUSINESS sat down with General Manager Brandon Fay to talk about how Trattoria Dell’Arte thrives in a city like New York, where the target guest is, well, everyone.

Fay has a collection of brightly colored, horn-rimmed glasses that are as striking and varied as the restaurant he runs. To succeed as a restaurateur in New York, you need a strong personality, and Brandon has it in spades. As he speaks about Shelly Fireman’s marquee restaurant and the restaurant’s variety of fresh offerings, it becomes clearer that while Trattoria Dell’Arte has mass appeal, there are highly-calculated details worked out behind the scenes that make it truly unique in ways consumers don’t even notice.

Trattoria Dell’Arte offers a la carte dining for approximately 325 people, with a private dining section for 100. The décor draws you in with a blend of old and new. Traditional Italian-style art is combined with modern marble sculptures of noses, ears, and other body parts – all giving the sense that Trattoria Dell’Arte tantalizes all the senses.

But all this would be window dressing were it not for the real rock star of this experience: The food. Upon entering, the first thing to catch your eye is the restaurant’s sprawling vegetable antipasto bar, one of the largest in the city. Fresh beets, eggplant, ramps and countless other items rotate in and out of the bar based on seasonality. You can order a plate of three or six items at a time.

“We always know how to throw a party and everyone is always invited,” says Fay.

The menu goes deeper to provide a breadth of offerings, from its signature handmade pastas to its lobster salad and the super thin crust margherita pizza. The antipasto bar gives guests the option for lighter fare, but the comprehensive menu offers fresh options spanning seafood and traditional Italian offerings as well. While its signature pizza has been on the menu for almost 30 years, there is no shyness about trying something new, especially when guests demand it.

Fay goes beyond managing the restaurant from a high level or from the office, he is on the floor every night, talking with guests, inviting them to experiment with the menu, challenging them to try something new, and above all, listening. “When we work on the floor,” he says, “it’s important to listen to what the guests are saying, and if all your guests ask for soft-shell crabs and ramps, then you better have soft-shell crabs and ramps.” 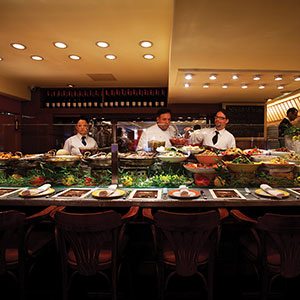 It’s hard to overstate the importance of freshness and how it comes through in every single ingredient at Trattoria Dell’Arte; frankly, you would need to taste, smell and experience it for yourself to truly get a sense of how it feels. Chef Anthony Acinapura and Director of Food Operations Sara Cann try to obtain local and in-season produce whenever possible.

“Sara Cann is a writer and culinary school graduate who follows her stomach more than her heart,” says Fay. While a good portion of the menu items stays the same throughout the year, seasonal ingredients like spaghetti squash or ramps act as enhancers to an established dish. The team visits the Union Square Farmers Market frequently for fresh and local produce. Chef Anthony has been a regular for years, allowing him to get first dibs on great products.

Jazz is quintessentially New York, and that spirit flows through the evolution of the restaurant’s menu, mixing and matching of tones and notes picked up from various sources. “Everyone has more access to everything,” says Fay, adding, “I can tell you what someone is serving on a menu in Brooklyn, California, or Italy in seconds. We research a lot; we go out a lot. We see someone doing something cool with a vegetable or pasta. We bring that idea back to the restaurant, and try to use the same ingredients and make the dishes in our own way. We jazz it up.”

It’s difficult to draw a formula from the success of Trattoria Dell’Arte, or any successful New York restaurant for that matter. But what is unmistakable about this restaurant in particular is its sense of personality. Trattoria Dell’Arte reminds one of no place except Trattoria Dell’Arte. It’s a place that embraces its location in the middle of Manhattan, and survives and grows in large part thanks to its ability, in a city filled with noise, to listen to its guests.