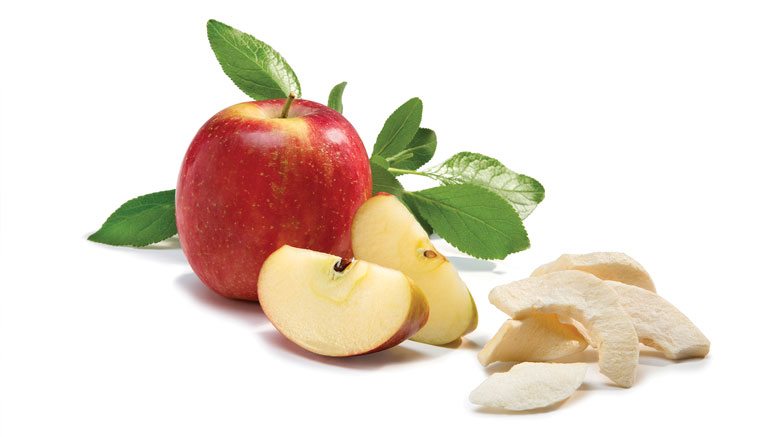 Health-conscious snackers gravitate toward these profitable and popular items in the produce department. 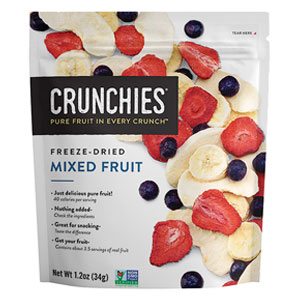 “The freeze-dried fruit retail market is the fastest-growing segment in the entire dried fruit category,” says Angela Liu, founder and president of Crispy Green, a natural food company based in Fairfield, NJ. That means it’s a market — and potential profit center — that produce executives should be paying attention to.

Many consumers still need to be educated about what freeze-dried fruit is and why it’s so good for them. Scott Jacobson is the chief executive of Crunchies Natural Food Company, a Westlake Village, CA-based company that was among the first consumer brands to introduce freeze-dried snacks. He sees produce executives as a partner in the education process, which explains why he pushes to have his products merchandised in produce. “The nutritional content is where the consumer is lacking knowledge,” he says. “The beauty of being in produce is that the managers are professionals. They know their products really well, and they interact with consumers in the department. That’s something you don’t get in the grocery aisle.”

Just what is freeze-dried produce?

“With freeze drying, you’re taking out the water and leaving in the color, nutrients, aroma and flavor of the food,” says Jacobson. “They taste, smell, look and are as nutritional as fresh food, but the water is out, so it’s a crunchy item. Consumers like snacks that crunch. That’s what makes the product interesting and unique.”

“Freeze drying is an ancient Incan technique used to preserve food thanks to the freezing temperatures found at high altitudes in the Andes,” says Thierry Ollivier, founder and chief executive of BrandStorm Inc., a Van Nuys, CA-based company marketing its products under the name Natierra. “The Incas placed sliced potatoes under a cloth and froze them overnight. Then they would walk on the cloth in the morning to squeeze out the moisture, making a portable, ‘shelf-stable’ meal.

“Through the freeze-drying process, 99 percent of the moisture is removed,” he continues. “The result is a preserved fruit or vegetable snack that holds its shape, color and nutritional value. Each bite has a natural crunch and delicious, tangy flavor.”

Why does it make sense to merchandise freeze-dried food in produce? “When we rebranded, we did a big study on the consumer and what drives and motivates them,” says Jacobson. “What was interesting was the most likely consumers of freeze-dried fruits and vegetables are fresh fruit consumers. It’s another delivery system for them to get their vegetables.”

“These products are appropriate for the produce department because they offer consumers a convenient option to eat more fruit, even while they are on-the-go,” says Liu. “Today’s consumers are constantly on the move, and do not always have time to slice a fresh mango or store a banana in their briefcases. Dried fruit gives them the opportunity to take their fruit wherever they go, and also satisfies those pesky crunch cravings.

“Our sales data also points to a higher degree of profitability when our products are merchandised in the produce department versus grocery,” she adds. That’s another reason it makes sense to carry freeze-dried fruits and vegetables in produce rather than grocery.”

Steve Freischmidt, produce coordinator for Woodman’s Food Markets Inc., a 16-store chain with locations in Wisconsin and Illinois, and headquartered in Janesville, WI, says freeze-dried fruits are the most popular with his customers. Shoppers will find a wide variety, including strawberries and other berries, mangos, Asian pears, cantaloupes, tangerines, apples, bananas, grapes and pineapple.

For the most part, freeze-dried fruits come with no preservatives, artificial colors, additives or added sugar, which adds to their healthy appeal. However, Natierra dips some of its freeze-dried mangos, bananas and strawberries in chocolate for a sweeter treat.

“Mothers with children and Millennials are still the biggest buyers of these products, but that is changing as consumers are becoming interested in eating healthy snacks that are easily portable,” says Liu.

Consumers purchasing snacks want healthy products that transport easily, will not spoil and can be eaten on the go. Freeze-dried fruits and vegetables have all of those qualities. “It’s not going to go bad on a hot day or in a gym bag,” says Crunchies’ Jacobson.

Ollivier suggests using freeze-dried foods beyond snacking. “They can be enjoyed at home as a crunchy topping on cereal, yogurt, salads, smoothies and ice cream,” he says. “With their intense color and flavor, they are a great baking ingredient. Whole or crushed into a fine powder, they give a natural color and fruity flavor to muffins, pancakes, ganache, cupcake frostings and popsicles. ”

“The main thing is to merchandise freeze-dried food so it’s visible,” says Freischmidt. “Otherwise, it’s going to get lost and you’re not going to have any sales. ” 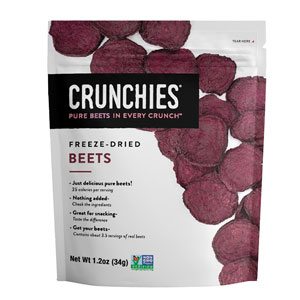 Make sure freeze-dried fruits and vegetables are merchandised with other snacks. To ensure they stand out, place them on racks, in shippers or on other highly visible display pieces. “Retailers have done a great job of creating these destinations for healthy snacks,” says Jacobson. “Having a prominent section is an important first step. It’s an impulse item and has low household penetration, but we think as consumers learn about it, they’ll be looking for it.”

Another option is to put them next to the fresh — preferably organic — fruits and vegetables, says Ollivier. His experience is that they’ll see superior point-of-purchase performance there.

This is one product that may require experimentation. “I think demos are a very expensive vehicle that doesn’t yield the results we’d like to see,” says Jacobson. “When we have a new retailer, we’ll geo-target likely consumers around those stores and send them samples or coupons to alert them that Crunchies is available. Because we know the product is on-trend in so many ways, we want to get that barrier to sample down rather than a demo.”

Instead, focus on educating consumers about their nutrient density, great taste and satisfying crunch. These qualities should be enough to increase sales and keep consumers coming back for more.

An Appetite for Snack Sales