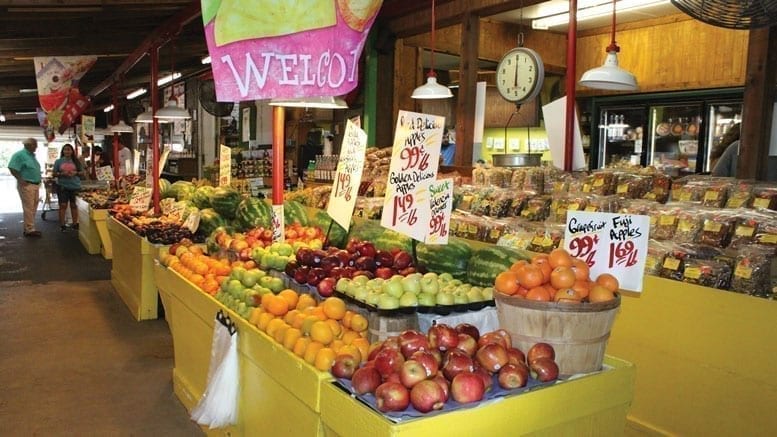 A large selection of fresh fruits and vegetables, a dedication to sourcing quality local and regional produce mixed with lifelong customer relationships are key ingredients in the success of The Farm Patch Market. For decades, the Bryan, TX, produce store has been a destination for shoppers in the Bryan-College Station, TX, area, and beyond.

Accounting for up to 80% of the central Texas store’s sales, fresh produce is essential to the store’s success. “Produce is our main item,” says Mark Scarmardo, co-owner and a fourth-generation member of the Scarmardo family, which has farmed in Texas since the 1890s. “That’s the girl that brought us to the dance. We always want to keep focused on that.”

The Farm Patch has sold produce under 6,000 square feet for more than four decades. It also sells specialty foods, such as cheeses and gourmet items, runs a garden center and sells Christmas trees. The store attracts customers from as far as Houston (up to 100 miles away), who will make a day out of their shopping.

“As people have to drive to get to you, as you’re not in their neighborhood, you better have something for them that’s better than what they can get elsewhere,” says Scarmardo. “That’s the core of our business. If we had everything the other stores had, there would be no need for us being here. We have to pick up on those items. That’s a key part of being in business today.”

Tommie Atchison, a retired Bryan security worker, says, “ I come here because everything is fresh. You find things here you can’t find elsewhere.” The store’s loyal customers have been shopping for decades, including Ina Williams, of Normangee, TX, about 40 minutes northeast of Bryan.

Farm Patch sources many tree-ripened peaches, and in late summer, was transitioning from Texas peaches to Colorado peaches. “It’s all about getting the product being picked fresh and getting it into your stand,” says Scarmardo. “You have to know where to go and where to find it.”

During the fall, The Farm Patch erects large displays of pumpkins and sweet corn and even plants corn behind the store. Fall customer events often feature a 1,000-pound pumpkin. “We try to make shopping as fun as possible for the customer,” says Scarmardo. “We try to make it an experience.”

In the fall, pecans, walnuts and Indian corn stalks become important. The store will move thousands of pounds of pecans in the fall, different from large grocery chains that don’t push them, he says.

Competitive pricing is important. “You have to have the right price,” says Scarmardo. “You have to have good merchandise to go with it.” Tomatoes, particularly Tennessee tomatoes during the summer, are big sellers. Avocados and cream peas (that include purple hull beans, similar to black-eyed peas), see big demand.

The Farm Patch sources a variety of produce from throughout Texas and neighboring states, including Louisiana and Oklahoma. It enjoys strong relationships with many Southwest growers and tries to buy as much from the region as possible.

“We go to each state and try to find things they have and items shoppers may not see elsewhere,” says Scarmardo. “To get people in, you have to have a sweet peach, a homegrown tomato, those peas, fresh okra and the best plums.”

Texas’ local deal typically begins in May and finishes by July, with the fall deal bringing broccoli, cauliflower and leafy greens. Sweet potatoes from Louisiana and East Texas are popular. As many of the store’s customers enjoy Louisiana creole foods, during the spring, the store has a crawfish promotion. Potatoes and onions and other produce, such as greens, are displayed.

In the summer, watermelon is sourced from Wiggins Farms in nearby Center, TX, as well as from the Red River Valley of Oklahoma and Texas, and the Texas panhandle. During peak season, almost every day The Farm Patch sends a truck to pick up what it needs to keep the large watermelon display fresh.

An instrumental part of The Farm Patch’s success is to keep up to date. Over time, the store adds new items. “You always have to keep changing and do something a little different,” says Scarmardo. “You just can’t sit there. If you’re not moving forward, you’re moving backwards.” Over the years, driven by customer requests, the store kept expanding.

The Farm Patch is in a middle-class neighborhood. Situated close to Texas A&M University campus, the area is between the upper and lower ends, he says. Because many university professors are from the Northeast, they’re accustomed to the old markets where they grew up. “The younger ones teaching now come in and tell me they grew up going into these kinds of markets and the ones that are in their 50s and 60s tell you stories,” says Scarmardo.

Fifth-generation family members manage the store and family wholesaling and farming operations. In the 1890s, Carlo Scarmardo, Mark Scarmardo’s great grandfather, emigrated to the United States from Sicily when he was a teen. Like many Italian immigrants, after arriving in New Orleans, they headed west. A large group of Italians homesteaded in Central Texas’ Brazos River bottoms. Carlo Scarmardo and his son and grandson farmed cotton. The family planted okra as a cash crop for Carl’s sons during the summer.
In high school in the early 1970s, Mark Scarmardo drove overnights twice a week, hauling okra to produce markets in San Antonio and Houston. The family’s farming operation sold produce to retailers and restaurants.

Seeing a need for fresh, quality produce in the Brazos Valley area, Mark Scarmardo and a partner he later bought out, started The Farm Patch in 1975. His father, Carl Scarmardo, joined a couple of years later. Two of Mark Scarmardo’s brothers, David Scarmardo and Greg Scarmardo, also became involved and are store partners and partners in the wholesaling business. Mark Scarmardo’s sons, Mark Jr., is a managing partner in retail while Karl Jr., is director of purchasing.

Scarmardo Foodservice began operations in the early 1970s. It services customers within 100 miles of Bryan and is a member of UniPro Foodservice, Inc., a large U.S. foodservice cooperative.

Mark Scarmardo learned the value of hard work from his father. “At a young age, I saw how he had to struggle and how he hustled the business,” he says. “If you give kids money early in life, they don’t know how to work hard.” Carl Scarmardo died in 1978.

That determination is seen on the store floor. Customers are often surprised to see the store owner working on a Saturday. The business requires working part of Saturdays to give employees guidance and ensure they’re prepared. “You have to be hands-on,” says Scarmardo. “The customers appreciate you working to give them the best product you can. They like to see the owner and like to let the owner know they’re spending money in your store.”

Scarmando says The Farm Patch has been a springboard for numerous college students’ careers.

“These college students are some of the best,” says Scarmardo. “When they come to work for me, I tell them they will work here for three to four years and then get a job. If you do your work, I promise you will get the job.” pb