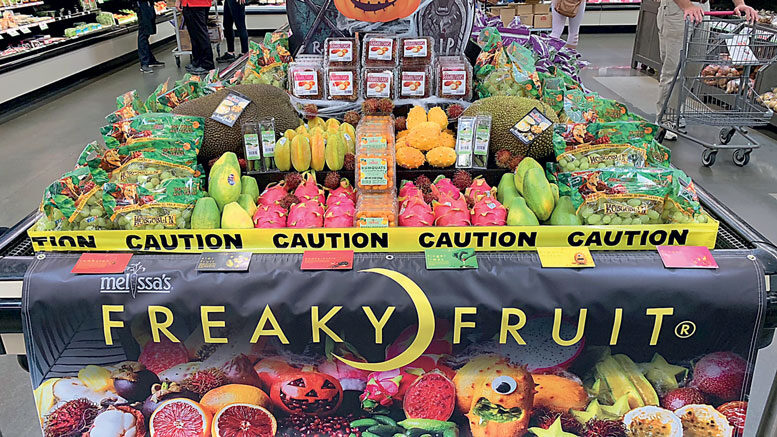 Celebrating the end of summer, and beyond into the fall holidays, is a register-ringing theme for many retailers.

Not many, if anyone, has Sept. 22 marked on their calendar as a holiday. This official start date of fall goes unnoticed by most Americans, replaced instead by Labor Day some two weeks prior as the celebration that marks the shift from summer and fall. Yet, it’s the bounty of summer fruits and vegetables still available for Labor Day, the huge commercial spending for Halloween, and Thanksgiving as the biggest belly-busting food holiday of the year that makes this season one to fall in love with as a selling opportunity for retail fresh produce.

“Fall is a very good season for selling produce,” says Marc Goldman, produce director at Morton Williams Supermarkets, a 16-store chain based in Bronx, NY. “It’s a time when people are back from vacation, kids are in school, and families are back to a normal routine of cooking again especially as it gets cooler. Then, there are big cooking holidays like Thanksgiving.”

Celebrating the end of summer is a register-ringing theme for many retailers.

Similarly, stone fruit stars in Labor Day promotions at New Seasons Market, a 20-store chain headquartered in Portland, OR. “Summer in the Pacific Northwest runs well into September. We’ll have peaches and nectarines until mid-month, and then there will be a shift to grapes. Grilling categories like onions hold strong through September,” says Jeff Fairchild, produce director.

Right after Labor Day is when many retailers transition to a fall/winter reset of the produce department. Pumpkins are eye-catching in this changing scene.

“Pumpkin products begin to appear earlier and earlier,” says Sarah Frey, owner and chief executive officer of Frey Farms, in Keenes, IL. “Geographical regions respond differently to this trend, but an even earlier welcome to fall is anticipated this year.”

The company offers bins of its carving, white and pie pumpkins, and bins of its Autumn Coloeur, a mix of pumpkins of different sizes, shapes and colors. There are also mini ornamental pumpkins, as well as decorative dried corn and gourds.

Set the stage early when the consumer first walks through the door with an eye-catching fall display, Frey adds. “It gets them thinking about the many other items, throughout multiple departments, that they may need or want. Some of the best displays evoke a sense of the on-the-farm fall harvest experience.”

BACK TO SCHOOL: August/September

August is a big back-to-school time. However, nearly one-quarter (22%) of school districts in the U.S. welcome students back into the classroom after Labor Day, according to 2019 data from the Washington, DC-headquartered Pew Research Center.

“The old, tried-and-true, back-to-school events such as apples for lunches and after-school snacks are still a great way to capture those back-to-school dollars,” says Diane Smith, executive director of the Michigan Apple Committee (MAC), in Lansing, MI.

But out-of-the-box thinking is fun, she adds. “Try promoting all back-to-school size fruit in one display at the same retail and offer a tote bag to fill up. Apples, oranges, pears, tangerines, and the list goes on. Educating parents and students about the benefits of eating fruit is a theme that we need to convey at all levels of marketing, down to the point of purchase.”

Gala and Honeycrisp continue to be Michigan’s best-selling apples, says Trish Taylor, marketing manager for Riveridge Produce Marketing Inc., in Sparta, MI. “Bagged apples continue to lead the way. Customers can quickly grab a bag, as well as shoppers for home delivery and curb pick up. Pouch bags have gained momentum with premium varieties like Ambrosia and Pink Lady. ”

Pears are also ripe for back-to-school promotions, says Brianna Shales, marketing director for Stemilt Growers LLC, in Wenatchee, WA. “Selling them in our kids brand, Lil Snappers, is a great driver to parent/kid consumers looking for simple snacks. Retailers that carry pouch pears can see 12% to 15% of their pear sales come from pears and at a higher average purchase volume than bulk purchasers.”

Back-to-school time, and more in-person gatherings, often coincide with the start of cold and flu season.

“Promote the produce department as a go-to destination for a natural immunity boost, taking advantage of the fact that 76% of consumers agree that eating fresh produce is important to building immunity defense,” says Alex Jackson, director of sales for Frieda’s Branded Produce, in Los Alamitos, CA. “As shoppers dash to the pharmacy, draw them into attention-grabbing shippers where they can stock up on some Vitamin-C-packed citrus.”

Beyond fruit, back-to-school is an A-plus time to promote vegetables.

“Easy recipes featuring onions and potatoes are always a staple for busy families heading back to school. Post-pandemic, we are seeing that people are still cooking more at home,” says Roderick Gumz, owner with brother Richard, of Gumz Farms, in Endeavor, WI.

New crop variety potatoes and onions harvest in August and September, adds Robert Schueller, director of public relations for Melissa’s/World Variety Produce, in Vernon, CA. “So, quality and quantities are at an all-time high.”

Likewise, New Seasons Market hosts a two-weekend apple promotion called Apple Fest each October. “Apples are huge here in the Pacific Northwest. We have several long-standing partnerships to source from small, local, organic growers. In-store, we’ll have 15 to 20 varieties of organic unwaxed apples available for tasting. It’s a time we like to show the new season arrivals and get customers educated and interested in purchasing a greater variety of apples right out of the gate and right through the season,” says Fairchild.

The Pacific Northwest, East Coast states like New York and Pennsylvania, and Midwest states such as Michigan all harvest sizable apple crops in the fall.

“The entire month of October is a holiday to our industry — it’s National Apple Month. The above-average size of this year’s crop means no concerns about availability for all our customers,” says MAC’s Smith.

“We have many pre-planned marketing efforts set up for October with our key account partners. These include working with our partners’ web-based shopping formats to offer digital coupons, web banners, loyalty card offers, and targeted emails, all geared to help our retailers increase sales for October and beyond.”

A pumpkin patch display takes shape in early October at New Seasons Market, which Fairchild says is set up outside the store. “There will be Cinderella and white pumpkins, but the usual orange varieties represent 40% of sales. Hard squash and gourd displays, hay bales, and cornstalks are there, too. It’s a display that sets the scene and puts customers in the mind to buy and start decorating for Halloween.”

Jack-o’-lantern pumpkins continue to lead by sheer volume, says Frey Farms’ Frey. “However, we have continuously noticed and tracked an uptick in the sales of our unique heirloom varieties year after year. We expect our sales volume for our heirloom variety pumpkins to nearly double this fall harvest season.”

Shoppers are buying products they will display longer and they’re incorporating more squash as well as pumpkin into recipes earlier, Frey adds. “Cross-merchandising opportunities for fresh pumpkin products are to have all ingredients items needed for sweet or savory recipes in the same location. This makes it easy for the customer to try something new.”

“Our Freaky Fruit promotion capitalizes on the abundance of tropical fruits available this time of year. Last year, we had 450 retailers participate, with a 20% to 35% increase in retailers participating annually since we started this newer promotion five years ago,” says Melissa’s Schueller. “We suggest that retailers new to the promotion carry and build a display with the top 10 selling items. These are white dragon fruit, passion fruit, cherimoya, red dragon fruit, red Caribbean papaya, Kiwano, mango, young coconut, jackfruit, and starfruit.”

The company offers a Freaky Fruit-themed retail sign kit. This includes tear-off pads with party recipes like Monster Snacks, made with rambutan and pomegranate arils, and Dragonfruit I Scream, with dragonfruit, pomegranate and finger limes.

“Some retailers build this display next to their pumpkins and hard squash. Others put it right at the front of the store with the big Halloween candy displays,” says Schueller.

Fresh cranberries and yams star on end cap displays at Morton Williams Supermarkets in the weeks before Thanksgiving, says Goldman. “We’ll have marshmallows next to the yams. Brussels sprouts are also a big item.”

Fresh cranberries are one of the few fruits in the produce department with only seasonal availability.

“Early varieties of cranberries start harvest mid-September. Retailers that like to be first on the shelf order these. However, we suggest they order only what they can sell, because by mid-October and into November, the tried-and-true longer shelf-life varieties harvest,” explains Kevin Tritz, who handles sales and operations for the Twin Lake Cranberry Co. LLC, in Vesper, WI.

The company has introduced a 12-ounce mesh bag for its cranberries, packaging that offers breathability for better shelf life and enhanced product visibility for improved merchandising. Tritz says over half of retail orders for cranberries are now in mesh, although the company also packs in traditional poly bags.

“Price is important to promote cranberries for Thanksgiving. Since people don’t really stock up, selling them on the front page of the circular as a loss leader gets shoppers in-store, where they’ll buy everything else for their holiday meal,” says Tritz.

Yams and sweet potatoes are other staples of the holiday meal.

As for potatoes and onions, two other Thanksgiving essential ingredients, “we are seeing increased demand for yellow potatoes. Reds have been solid for a long time, but yellow movement is slowly catching up,” says Gumz Farms’ Gumz. “There’s still good demand for 5-pound packages, and we’re seeing a little bit of an increase in sales for 3-pound Bs. On the onion side, 3-pound yellows are our best-seller, 2-pound pre-packs are creeping up there, too.”

For dessert, “Thanksgiving is always a great time to purchase apples for making pies. While we like to tout our sweet, juicy, out-of-hand eating apples like Honeycrisp, old standards like McIntosh and Jonagold simply can’t be beaten for making the perfect apple pie,” says Riveridge’s Taylor.