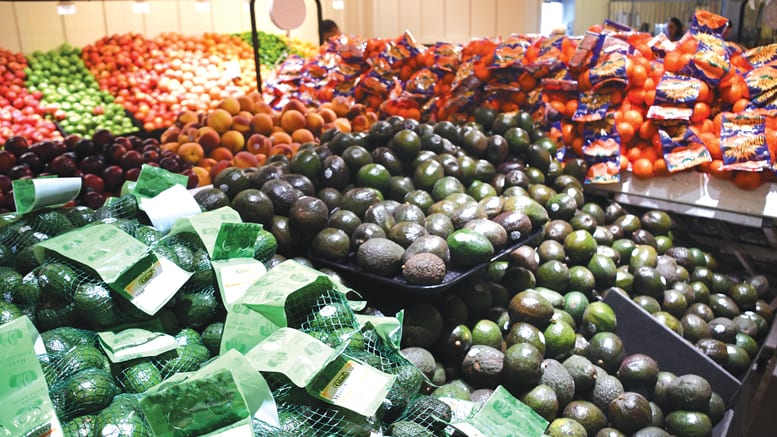 Few produce commodities have taken off in recent years like avocados, which continue to enjoy double-digit growth and have outpaced bananas to become the No. 1 import fruit in the United States by dollar value, according to statistics reported by Freshfruitportal.com.

Our consumption of fresh avocados has skyrocketed since the turn of the century, according to U.S. Department of Agriculture Economic Research Service Fruit and Tree Nut data, from two pounds to more than seven pounds per capita.

Freska Produce International ships avocados from Mexico and California, and imports a full line of mangos.

Although our changing demographics explain part of the demand for these tropical favorites, there is also a growing number of people who have come to learn and appreciate the many uses of avocados.

“People in general have figured out there are more uses for avocados than just guacamole,” says Patrick Lucy, vice president for sales at Del Rey Avocado, Fallbrook, CA. “They use them at breakfast and in the center of the plate, not just the side. People are also seeing the health benefits. The demand has been very strong; there has been growth year over year.”

Del Rey Avocado grows on its own acreage in San Diego County and also ships fruit from California, Mexico, Peru, Chile and Colombia.

Fortunately, our neighbors to the south produce an abundance to satisfy our appetite for this versatile, delicious and healthy fruit.

“From what I hear, the crop looks pretty much the same as last year and it will depend on how much they export,” says Clevenger. “The number they throw around is about two billion pounds. [Mexican avocados] are pretty much all-year-round.”

Avocado imports more than tripled over the past decade, according to U.S. Department of Agriculture Economic Research Service statistics, and are currently more than two billion dollars per year. The United States imported 1.7 billion pounds of avocados from Mexico in 2017, according to statistics from the Hass Avocado Board, Mission Viejo, CA.

Much of the credit for the extraordinary success of this fruit shipped from orchards in Mexico to produce departments in the United States and Canada goes to a marketing board — well-funded by growers below the border as well as importers in the United States — that has been aggressive and creative in promoting their product.

“Avocados From Mexico has done a great job to increase consumer awareness and overall acceptance of the product,” says Brent Scattini, vice president of sales & marketing at Mission Produce, Oxnard, CA. “I think that in many cases, Mexican avocados are the preferred country of origin.”

Mission Produce, which concentrates on just avocados, uses packing facilities in five countries and regional ripening centers at eight North American locations to be a leader in the commodity.

“There are so many categories that the consumer is simply unaware of where the product comes from, but Avocados From Mexico’s promotional strategies and consumer marketing campaigns have certainly changed that paradigm,” says Scattini. “Domestic per capita consumption numbers over the past decade obviously validate that notion.”

There are opportunities to expand sales of this popular fruit, and the growers’ marketing agency, Avocados From Mexico, brings an impressive array of promotional efforts and advice to retailers.

“The marketing board based in Mexico offers a lot of support to the retailers,” says Clevenger. “They have a large budget, and demand seems to be increasing every year.”

“Celebrate fun mango salsas or tropical, fruit-forward salads. It’s also a good idea to cross-merchandise with traditional fall items to show how tropical items can transition through the season.”

Their promotions last virtually the entire eight-month-long harvest, which begins roughly around the beginning of the U.S. football season.

The Tastiest Tailgate promotion offers retailers Avocados From Mexico bins with side stackers for products from a leading margarita mix company, to offer an eye-catching answer to the question of what to eat and drink during the game. Avocados From Mexico also has offered several rebates and coupons this season.

Campaigns in store, over social media, and through radio and television are augmented by avocado promotions initiated by grower-shippers and retailers.

“We always encourage retailers to place recipe cards directly next to the product in order to drive sales and encourage consumers to use the product in various recipes,” says Dionysios Christou, vice president for marketing for Del Monte Fresh Produce, Coral Gables, FL. “In-store demonstrations are a great way to allow consumers to experience the product, and secondary displays can also promote impulse sales.”

Del Monte, which was born more than 130 years ago, has continued to expand its diverse portfolio of fresh and fresh-cut fruits and vegetables and understands the importance of promotion. “Del Monte has an active social media page where we showcase our products and regularly highlight how consumers can enjoy avocados,” says Christou. “We also work hand in hand with different associations such as Avocados From Mexico to coordinate marketing programs.”

Likewise, Robinson Fresh has developed sources and the logistics to deliver a range of fresh fruits and vegetables.

“There are a few ways to have success with avocados in the fall,” says Allan Acosta, tropical general manager at Robinson Fresh, Eden Prairie, MN. “When weather starts to turn cold, it is a good idea to remind shoppers of warm weather with tropical items. Celebrate fun mango salsas or tropical, fruit-forward salads. It’s also a good idea to cross-merchandise with traditional fall items to show how tropical items can transition through the season. Current seasonal celebrations or occasions can be encouraged through retailers’ use of point of sale materials.”

Retailers can get help staying on top of shifting markets, and the logistics needed to satisfy them.

“As consumer demand is constantly shifting, we have made an effort to better understand shoppers through our own proprietary research, and we are happy to provide that research to interested parties through reaching out to our team,” says Acosta. “Based on consumer insights, we’ve found that no matter the product moved, more customers than ever want fresh foods, and they want it now. Our cold chain logistics services allow us to meet this consumer demand and understand the complexities of moving and, more importantly, maintaining quality produce with more than one million temperature-controlled loads annually.” 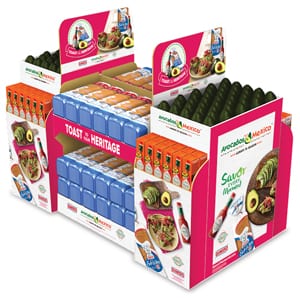 While Avocados From Mexico and others are doing the heavy lifting to increase demand, retailers also have a role to play at the store level.

Fortunately, unlike the complex apple and citrus categories, only one avocado variety really matters.

“It is almost entirely Hass avocados,” says Freska’s Clevenger. “That’s pretty much the variety retailers use.”

It is important, however, to display avocados at different stages of ripeness and in varying sizes of bags.

“Avocados deserve a good amount of space,” says Del Rey Avocado’s Lucy. “Not only should you include pre-conditioned, but you should also have different sizes and packs, and organic, too.”

Some shippers pride themselves on being able to consistently include in their deliveries some avocados that are ripe and ready-to-eat.

Preliminary reports are that shipments out of Mexico this season should begin on time and continue steadily until the late spring.

“Avocados From Mexico is projecting steady volume,” says Bezart-Hall. “Our current volume levels are normal for this time of year as our season begins to ramp up. We are entering a stronger harvesting period that will significantly increase supply in the coming weeks and months.”

Normal volume, if it continues, should result in a seasonal harvest in Mexico of a little more than two billion pounds.

“Our current volume levels are normal for this time of year as our season begins to ramp up. We are entering a stronger harvesting period that will significantly increase supply in the coming weeks and months.”

“Volume projections are showing another bumper crop out of Mexico in 2018-19,” says Keith Slattery, founder and chief executive of Stonehill Produce, Dana Point, CA. “Estimates on certified fruit for the United States show the first-stage advantage will go to the Marcena fruit at around 1.8 billion pounds. Late-season Negra is too early to estimate but will likely take the total crop past last year’s final harvest of 2.1 billion pounds and push total 2018-19 crop volume into the 2.2 billion-pound to 2.3 billion-pound range.” 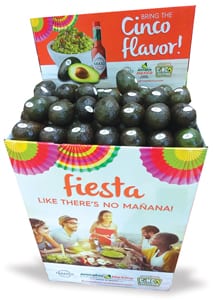 Stonehill Produce has specialized in importing avocados from Mexico for 20 years and every day brings 400,000 of them into the country that can be traced back to a particular orchard.

“High volume does not automatically mean low prices for avocados because consumer demand continues to steadily increase,” says Slattery. “The popular fruit is a hot online trend being fueled by the avocado toast craze and similar uses that have gone viral. Effective promotions run with consistent intensity year in and year out have consumers willing to pay higher and higher prices for avocados at retail and foodservice.”

Other industry insiders agree that volume should be strong this year, at least at the beginning of the season.

If volume does not guarantee low avocado prices, it should allow for promotions throughout the long season.

“There should be around two billion pounds of avocados from Mexico; there should be promotable volumes from October through May,” says Lucy.

Although Mexico provides the lion’s share of avocados consumed in the United States, growers in other countries are also beginning to see the increasing opportunity.

“The Chilean season has begun, and the first arrivals hit the United States in the last week of August,” says Allan Acosta, tropical general manager at Robinson Fresh, Eden Prairie, MN. “The addition of Chilean avocados comes at a good time, as the California and Peruvian seasons come to an end. We expect to see Chilean fruit continue to have a presence in the U.S. market this season if the market remains strong.”

“We just source out of California and Mexico, but avocados are also coming in from Colombia and Peru,” says Gary Clevenger, managing member of Freska Produce International, Oxnard, CA.

New sources could give shippers and retailers more flexibility in situations when the supply is interrupted.

“If we look back to a year ago at this time, weather in hurricane season had significant impact on crops and transporting those crops,” says Acosta. “Given the current, volatile freight market, it’s more important than ever to make sure every process from seed to shelf is streamlined. Our cold chain logistics services allow us to understand the complexities of moving and, more importantly, maintaining quality produce. We are happy to dive into the details of avocados, but we want to make sure the holistic process is considered.”