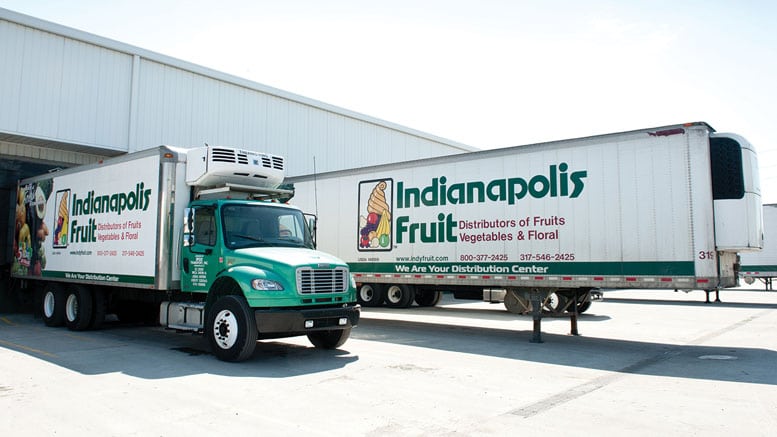 Surrounded by agriculture, Indianapolis is longtime adaptor of farm-to-table.

Indianapolis should be at the top of any list of the Midwest’s finest produce cities. Its central location means it’s a key transportation hub. Local consumers are excited to purchase fresh, healthy food, which means plenty of trips to produce departments at both national grocery chains and small, locally owned markets. An exploding restaurant scene is drawing tourists and giving visitors to the country’s No. 1 convention city plenty of good places to eat when they’re in town. Though challenges do exist, local wholesalers, retailers and foodservice professionals see bushels of opportunity in America’s heartland.

Indy At A Glance

Indianapolis is home to approximately 843,000 people, making it the 12th largest city in the United States. The metropolitan area is made up of 10 counties and has a population of closer to two million, which means it is the 23rd largest metropolitan region in the country.

Major industries in Indianapolis include insurance and financial services, tourism and hospitality, health care and medical equipment manufacturing, and other types of manufacturing. The median hourly wage is $17.68, and the mean wage is $23.09. The unemployment rate is 3.4 percent, which is lower than the state average of 3.7 percent and the national average of 3.9 percent.

Agriculture is also a big employer. The sector provides jobs for more than 400,000 people every year. Soybeans, grain corn, wheat and hay are the main crops grown in Indiana. There are several large hog operations, as well as a significant number of beef and dairy cows. The state’s farms also produce numerous fresh fruits and vegetables. Tomatoes are the most sizable crop, but farmers also grow melons, pumpkins, sweet corn and snap beans in large quantities.

Indiana earned the nickname “Crossroads of America” because it has access to a number of important transportation resources. More interstate highways cross Indiana than any other state in the country, and six major interstates run through or near Indianapolis. The city has the sixth-largest cargo airport and is fourth in total freight railways. Five major carriers, including CSX and Norfolk Southern, serve the community. 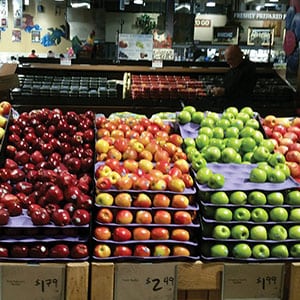 Local residents exhibit a growing interest in healthy, locally grown produce. The community has dozens of farmers’ markets, including the year-round Indianapolis City Market in downtown. Its first Whole Foods recently opened in the downtown core.

“The demand for fresh food has created an expansion of retailers in Indianapolis,” says Rocky Ray, vice president of Ray & Mascari Inc., a fourth-generation, family-owned company that specializes in tomato repacking. “Our city is a hotbed of competition, with all of the major retailers, as well as many independent markets, focusing on fresh produce. We have seen this excitement spill over into our restaurant scene.”

Indeed, Food and Wine and Zagat both listed Indianapolis as one of the country’s most exciting food cities in 2017. Travel + Leisure named it one of the best places to travel.

“It’s a fun time to be a foodie in Indianapolis,” says Morgan Snyder, director of public relations for Visit Indy, the local tourism and promotion board. “Twenty-eight million people are coming into Indianapolis annually to visit. Of the $5.2 billion in visitor spending, 26 percent is on food and beverage, which has become the highest spending in any category in visitor spending. Sixty-four percent of downtown restaurants are owned locally.”

Greg Corsaro, chief executive of IF&P Foods, a holding company that owns several of the city’s largest wholesale produce companies such as Indianapolis Fruit and Piazza Produce, confirms the city’s restaurant scene is thriving. He has a business partner who lives in Washington DC who visits on a regular basis. “He told me he’d come to eat at our restaurants before Chicago or New York,” he says. “There are national name-brand high-end restaurants, casual dining restaurants, and our independent group of restaurants right now is second-to-none.”

“We’ve forever been known as a meat-centric city, but there has been a shift in people appreciating the local produce and farms,” says Snyder. “We always say as a city we’re kicking ourselves for not coining the term farm-to-table because Indianapolis is a city that’s surrounded by agriculture, so we’ve been doing this for decades. It’s in our blood. It’s a Hoosier way of life.”

The produce wholesale business in Indianapolis is fairly concentrated. IF&P Foods’ Indianapolis Fruit was founded in the mid-1940s at the Indianapolis Produce Terminal and works mainly with retailers. The company carries a full line of produce and non-produce items and prides itself on providing merchandising support to all customers that request it.

IF&P Foods also owns Circle City Produce and Papania Produce, which focus on the foodservice industry as does Piazza Produce. In addition, the company has a fresh-cut processing business called Garden Cut and a tomato-repacking arm called Tomatoland’s Best.

According to Corsaro, IF&P Foods sold the majority of its ownership interest to Rotunda Capital Partners, a private equity firm, in 2017. “They left the management structure in place and let us continue operating, so they’re a source of capital and business expertise in the distribution space. They’ve been able to give us advice on servicing our customers better,” he says.

“We continue to enhance our warehouse technology,” says Corsaro. “We now have remote mobile ordering capabilities for customers at all our facilities. We’ve really built up our technology base, and going forward one of our primary focuses is an enhanced digital strategy. I want it to be easy to do business with us.”

This is a great time to be involved in the produce industry, says Corsaro. “Everything now is focused on fresh, local, unique and healthy, and produce and produce-related items really fit in that space.” 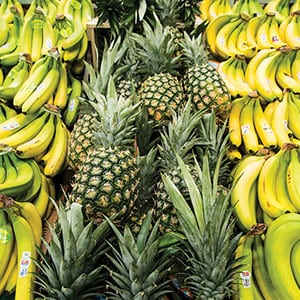 Indianapolis Fruit sources local produce whenever possible because there’s so much demand for it. However, that isn’t always an easy proposition. “It’s getting better as we move through time, but sometimes your local growers are not fully up to speed with good growing practices, so from a food safety perspective they don’t dot all their I’s and cross all their T’s,” says Corsaro. “We’ve been able to help some of them get GAP-certified to help with that.” Besides buying from local farmers, 33 percent of the produce the company sells is organic.

Bob Kirch, executive vice president of SpartanNash and president of Indianapolis-based Caito Foods, also sees strong interest in local and organic produce. Caito Foods started in Indianapolis more than 50 years ago as a distributor of fresh fruits and vegetables. It since has expanded to offer fresh-cut fruits and vegetables, meal replacements, floral items and complementary items such as juices, snacks and nuts.

SpartanNash acquired the company in 2017. Also located in the Indianapolis area is BRT, which is part of SpartanNash’s managed freight business. It specializes in dry and refrigerated freight services for produce and perishable goods.

“The interest and consumer support for both organics and locally grown fruits and vegetables continue to grow significantly, though the interest for local foods seems to be growing at a higher rate,” says Kirch. He attributes that largely to the growth of Millennial and Gen Z shoppers. “The affinity for both organics and locally grown/produced fruits and vegetables comes down to a concern for our planet, for the sustainability of smaller farmers and an appetite for freshness.

“We are learning consumers want to ‘know the story’ of the growers and producers they patronize,” he adds. “They expect those companies to treat the earth with respect, as well as treat their associates and customers with respect. … We’re becoming aware food is more than sustenance; it is reflective of our social tapestry. The decision of ‘what’s for dinner’ has evolved into a decision about environment, sustainability and transparency.”

Ray & Mascari is another player in the Indianapolis wholesale market. The company operates from a 70,000 square foot facility in downtown Indianapolis, as well as a repacking facility in Lakeland, FL.

Rocky Ray thinks there’s a place for small, family-owned companies like his. “We have state-of-the-art grading and washing equipment that still enables us to pack all of our tomatoes by hand,” he says. “We think this sets us apart from our competition, as our tomatoes are handled gently, which improves the quality and shelf life of our fruit.”

Ray cites competition within the local produce industry as a major problem, as does Corsaro, who says recruiting good employees is his second-biggest worry. “It’s hard to find labor, whether it’s warehouse labor or distribution labor. It’s a cold environment and you’re working at night, and no one wants to do that.”

Transportation is another challenge facing Indianapolis companies. “It will be interesting to see what happens with the new electronic log initiatives,” says Ray. “Although we do very little LTL shipments, I think this will impact those that are dependent on them.”

A challenge that’s also an opportunity is keeping up with the ever-changing demands of consumers. “Indianapolis is truly the ‘Crossroads of America,’ not only from an infrastructure standpoint, but also culturally and ethnically,” says Kirch. “Simply put, we have a diverse population that reflects consumer needs for a wide variety of products. … As the American culture continues to be that melting pot of diversity, the culinary world reflects that. To grow as a supplier, whether distributor or merchant of fresh foods, is to be constantly aware of the changes coming our way.”

In Caito’s early years, its product offerings totaled around 100 item options. It’s now many times that number. “Much of that is reflective of consumers who have redefined eating occasions to include healthy snacking and on-the-go eating,” says Kirch.

As the way people eat changes, produce wholesalers and retailers must adapt. “We are seeing more pre-prepared and grab-and-go items ruling the retail shelves,” says Ray. “Convenience, coupled with the ability to eat healthy, is just what today’s consumers demand.” Companies that can meet these demands have even more opportunities to be successful.