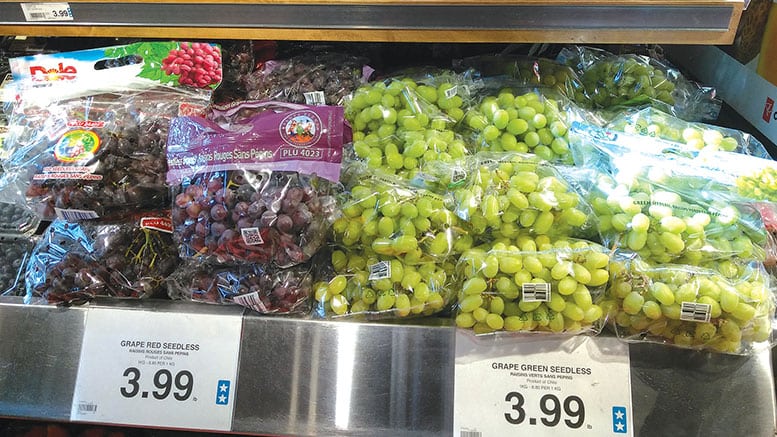 Increased SKUs spur retailers to consider marketing grapes as they do apples.

With an ever-growing number of grape SKUs competing for premium display space and growers extending the harvest window, retailers are faced with deciphering whether the large number of varieties signify the fruit is becoming ‘the new apple.’

Grape shippers will offer more information to pique retailer interest than conclusions about this question, because they do not agree.

“You already see grapes being merchandised like apples,” says Steve Kenfield, senior vice president of HMC Marketing Group, Kingsburg, CA. “You may not have 14 SKUs, but you do see seven. Grapes may be on a path to be marketed like apples.”

HMC grows and ships a variety of plums, peaches and nectarines, in addition to table grapes, in the heart of California’s great Central Valley.

“All of the new varieties are consumer- interest focused,” says Kenfield. “This will be the driver of growth and change in the category for the next five years. The improved varieties that are being grown in California, Peru and Chile, and to a certain extent in Mexico, are going to shape consumer preferences.”

Yet many shippers say what matters, at least for now, is not the varieties, but a consistent supply of quality grapes in all three colors that make up the program.

“A large, bountiful display with all three colors of grapes will attract consumer attention during peak of season,” says Megan Schulz, director of communications with the Giumarra Companies, Los Angeles. “Red seedless varieties are generally the most popular with consumers.” 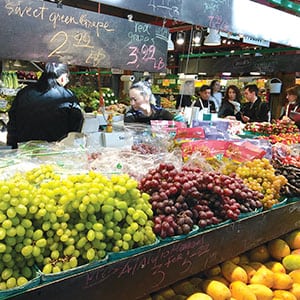 Grapes are such a popular, refreshing and economical fruit that this question almost boils down to how much do you want to sell?

If the California Table Grape retail science is on target, the impact on sales of giving more shelf space to table grapes is nothing short of staggering.

One caveat to the principle of more is better, however, is to also ask how much space can your staff keep well-stocked and looking fresh?

“Golden rule – never set a display bigger than can be maintained,” says John Pandol, director of special projects at Pandol Brothers, Delano, CA. “The other is, do not feel obligated to fill up the space. Many stores have too many square feet, and the default is to fill 100 percent of available space. Freshness is a big impulse buy, and I’m seeing stores fill the extra space with signage or decorations and improve rotation, which reduces shrink.”

No matter how many feet are in the display, grapes must be culled regularly to keep that inviting and fresh appearance.

“The most underused merchandising tool is the trash can,” says Pandol. “Freshness über alles. Optimum food waste is not zero – use your trash can. If corporate committed to carrying a specific brand or variety or organic for a time frame, and the fruit no longer is in good condition, change.”

Are Specialty Varieties Worth IT?

Once the amount of space for grapes is decided, the question becomes the number of SKUs, including how many specialty varieties should fill that space?

The answer to this begins with the three colors of grapes.

“Have a good display with two or three colors and point-of-sale material,” advises Lauren McNinch, sales support lead and marketing representative at Columbine Vineyards, Delano, CA. “You can have recipes, and we have display bins to merchandise in the grapes’ section. You should have eye-catching packages. You need graphics with good color, and you need to be able to see the fruit.”

The category grows a bit more complex if customers expect to find an organic option in each of the three main colors.

There is also a school of thought, particularly popular in the Central Valley, that California grapes are a category in their own right that should be prominently displayed.

There is a time from the late summer through the fall when California grapes are particularly abundant.

“With 65 percent of the crop shipping after Aug. 31, there is plenty of opportunity to showcase California grapes in the produce aisle and give customers plenty of options,” says Plummer.

But the importance of specific varieties depends on a number of factors, and it remains to be seen if grapes will go the way of apples with the emergence of Honeycrisp, Gala and Fuji. 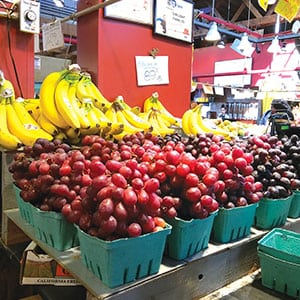 Some shippers find that, while the three colors are most important in stocking the category, there is also demand for particular varieties.

“It’s a little bit of both the color and the variety,” says McNinch, “Some of the retailers like the proprietary varieties. For us our No. 1 proprietary is Holiday, a red. Milano is a green proprietary.”

There seems no way around the fact that the demographics of shoppers ultimately will determine whether proprietary varieties matter. Are they willing to spend a few cents more for something different in produce?

“I don’t see regional differences across the United States, but I see a diversity of shoppers and their preferences,” says Jim Beagle, chief executive of Grapery, Shafter, CA. “Some consumers look for color, others for value, others for size, or color, or flavor or other quality attributes, and others for organics. Consumers and retailers are diverse, and what’s exciting about California table grapes is that as an industry we offer a full and diverse range of grapes to meet any consumer’s needs. Our best selling varieties are Cotton Candy and Moon Drops.”

The success of a specialty variety, whether proprietary or not, can come down to how well your supplier grows it.

“Pandol figured out how to grow the Sweet Celebration a few years back,” notes Pandol. “For us, it is our best selling variety, and we have a great retail following. Other growers’ results with the variety have not been as good, and not all retailers have the same outcome, but it works for Pandol.”

However many SKUs are on display, it is essential to find shippers who consistently provide good-looking, good-tasting grapes.

“The first thing is to be working with good suppliers who can give you consistent quality,” says Franz De Klotz, vice president for marketing at Richard Bagdasarian, Inc., Mecca, CA. “You should be carrying all three colors. You need consistency in terms of supply of the three colors.”

An attempt to promote particular grape varieties may even make the category too complicated and difficult to manage efficiently.

“The first thing is to be working with good suppliers who can give you consistent quality. You should be carrying all three colors. You need consistency in terms of supply of the three colors.”

“Consumers largely shop by color and don’t know varieties,” says Pandol. “The downsides of assortment are increased warehouse slots and increased shrink. A retailer who was trying to carry three colors of seedless, three colors organic, three named premium varieties and a multicolor clamshell told me she needed to reduce the SKUs because shrink was killing her.” 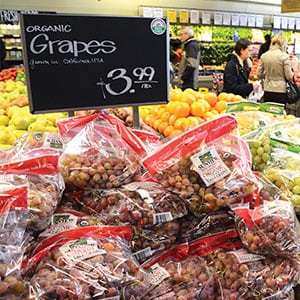 Advertising does, and it’s surprising how much it helps when you consider how long grapes have been a fully mature category.

“New research shows 55 percent of grape purchasers make their decision to buy grapes before going to the store,” says the California Table Grape Commission’s Plummer. “That makes it critical to reach consumers before they shop to help keep grapes top-of-mind. This can be done by providing customers with frequent promotions that highlight multiple varieties or colors, promoting both conventional and organic grapes and multiple ad page positions. Retail outlets should run weekly promotions on grapes throughout the California grape season, from May through January.”

If a store does carry a specialty or proprietary variety, it makes even more sense to invest in advertising the fact.

“We’ve seen significant jumps in volume when retailers advertise distinct, proprietary varieties,” says De Klotz. “They get a spike as high as 30 percent when they advertise a variety.”

The answer to the question of whether price should be used to increase grape sales varies from ‘probably not’ to ‘don’t you dare.’

“Grape merchandising tends to be more correlated with fruit quality and availability than the economy,” says Beagle.

Pandol says prices that are too low may drive away consumers suspicious that there must be something wrong with the grapes.

“In the real estate crash about 10 years ago, the weighted average price of grapes dropped almost 10 percent, and volumes remained similar,” he says. “When the economy is bad, retailers use really low prices on grapes to drive traffic into the store, a 68 cents-a-pound ad comes to mind. The problem is, the retailer is ‘investing in margin,’ meaning selling below costs. It might be good for the store but it is horrible for the category and at the end of the quarter, everyone forgets and managers wonder why no money was made on grapes. When the economy is better, stores tend not to price unrealistically low.”

What Mix Of Packaging?

This question is simplified by the fact grapes cannot be displayed in bulk without becoming too messy.

“Bulk displays at retail are rare because of the operational complications for retailers,” says Beagle. “Our experience at Grapery is that bagged grapes are preferred by most consumers more than clamshells, though there are certainly substantial exceptions, Don’t stack bags, keep grapes refrigerated, and offer consumers the range of choices that meet all shopper’s needs, such as organic, multi-color, value and premium.”

The numbers show pouches have become the overwhelming choice for displaying grapes.

Within the pouch category, however, it is worth noticing whether the package allows graphics to have full impact.

There are enough issues with clamshell grapes, the No. 2 package, that the pouch is almost a default choice.

“Rigid packaging negatively impacts grapes and with store labor and slip and falls, bulk displays are very unusual,” says Pandol. “So we are stuck with bags. High clarity stand up pouches are the standard. There is debate as to how much graphic is desirable, but no one is asking for more than 30 percent coverage, and many retailers want a clear bag. With regard to materials, I’m not a polymer chemist but we are moving back toward less ridged plastics.”

Although grapes can be seen as red, green, or black, here are the top dozen volume varieties shipped around the country in 2017, according to California Table Grape Commission statistics.