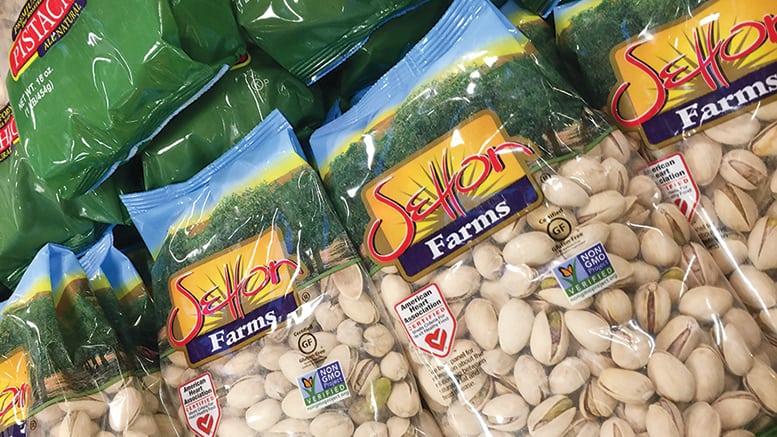 Shells or no shells, this nut captivates legions of fans.

Americans love pistachios, but selling them effectively in a crowded produce department requires a bit of ingenuity and initiative.

To maximize pistachio sales, retailers must balance a host of factors, including convenience, health benefits, promotions, merchandising and seasonality.

Fortunately, the pistachio category benefits from well-funded national advertising from one of the most progressive brands in the food industry, Wonderful Brands. With clever and sometimes-controversial television ads, pistachio sales have grown over the past 10 years.

Savvy retailers formulate a comprehensive strategy based on all of these factors.

There are many varieties of nuts, of course, and the fact most pistachios are sold with a shell may cause some consumers to perceive them as less convenient than almonds or pecans. On the other hand, many consumers actually enjoy breaking or splitting the shells.

Adam Cooper, vice president of marketing for the privately held $4 billion The Wonderful Company in Los Angeles, says he and his colleagues understand “there are two kinds of people in this world: people who want to work for their nut, and people who want it handed to them. To make everyone snack happy, Wonderful Pistachios offers Wonderful Pistachios No Shells for snacking and cooking.”

That product line, he adds, is “making it easy, providing all the great unique taste and health benefits of pistachios, just without the cracking.” It employs what Cooper terms the ‘pistachio principle,’ which states in-shell pistachios can help consumers fool themselves because the leftover shells may provide a visual cue for portions, potentially helping to curb intake. The act of shelling, which may be considered playing with food, makes pistachios the ‘mindful nut.’ We have a major health marketing program called The Wonderful Nut that communicates this benefit.”

Paul Huckabay, vice president of sales for Keenan Farms in Avenal, CA, says, “The principle keeps you from mindlessly grabbing handful after handful of a snack food. It’s all about mindful eating for a healthy lifestyle.”

“Actually, consumers enjoy the process of opening a pistachio,” notes Judy Hirigoyen, vice president of global marketing for American Pistachio Growers, a Fresno, CA-based trade association of more than 800 growers, processors and industry suppliers. “Research has shown it has a calming effect and slows down the speed at which you eat. You could say pistachios are the original slow food.”

Elise Silvester, sales and marketing at Setton Farms, Brooklyn, NY, agrees. “Pistachios have been growing in popularity for a variety of reasons, including increased availability, which gradually lowers cost, and numerous health benefits. Studies have shown opening pistachios slows consumption and prevents overeating. Getting to play with your food is a bonus,” she says.

Hirigoyen cites IRI data that shows pistachios are growing in both dollars and volume. “This time last year, pistachios were the third-largest selling nut, and today they’re the second-largest in dollar sales. Consumer preference is driving that, so it appears they are happily opening their pistachios.”

Although some consumers who like to play with food find pistachios intriguing, Hirigoyen suggests, “More likely, their surge in popularity is due to two things: growing awareness of their broad health benefits and growing awareness of pistachios as an enjoyable food that supports healthy weight. They fit well into diets that encourage plant-based protein, which is pushing pistachios into points of consumption beyond just snacking.”

According to Cooper, approximately 50 percent of eating occasions include snacking, and people eat an average of 2.7 snacks per day. “However, people are looking for ways to be healthy without giving up great taste. We’ve seen a 16 percent increase in volume growth and a 13 percent increase in dollar growth for total Wonderful Pistachios. Growth is coming from all demographics.”

Cooper calls his company’s No Shells line America’s fastest-growing snack brand, up 32 percent in the past year, “beating out all salty snacks, bars, jerky, crackers, cookies, candy and nuts and adding more dollars to snacking than any other single brand.”

Based on our consumer research, Hirigoyen says she expects the core pistachio consumer to be an adult who is health-intended and appreciates quality food. “In other words, a fit foodie.” She calls produce the ideal location for pistachios, whether packaged or bulk. “They’re a good fit next to all items, having the ability to sit next to fresh produce or next to the more snack style produce items.”

The health halo around produce items is consistent with the promotional messaging the pistachio industry conducts around the healthy benefits. Says Hirigoyen, “I recently returned from Europe and found a shift has occurred, with pistachios being merchandised in the produce aisle, the snacking aisle and a new category of healthy snacks aisle.” 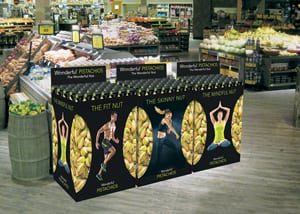 December is traditionally the top consumption period for pistachios. The holiday season, beginning with Thanksgiving, can be a time of over-indulgence, and consumers are always looking for healthy ways to add exciting flavors to their recipes – from a meal for their family to entertaining and snacking.

Seasonality used to favor the winter months, especially the holiday season. More and more, however, Hirigoyen is seeing year-round consumption in all global markets. “We attribute this to growing awareness of pistachios as a healthy food and a plant-based protein. In fact, we find spikes in consumption in Europe during the spring/summer months, as people look for portable foods they can take along that fit within their healthy diets.”

Although pistachios are merchandised year-round, taking advantage of promotional messaging for active adults “should increase demand for pistachios during good-weather months when people are outdoors and exercising,” says Hirigoyen.

Silvester of Setton Farms says pistachios work in all seasons. “Thanks to the amazing health benefits and increasing popularity, there is no longer a particular season for pistachios. In-shell nuts are great for snacking all year-round but sell especially well during major sporting events. Kernels get a spike during holidays when more people are cooking and baking than usual,” she says.

Super Bowl is the second-highest consumption occasion for Wonderful Pistachios, says Cooper. “Our integrated marketing campaigns target this high-consumption time across all our marketing platforms.”

To continue driving sports snacking as a top consumption occasion, Wonderful Pistachios launched its biggest football campaign ever — Put a Smile on Your Snackface — during 2017, featuring NFL stars Richard Sherman and Clay Matthews. “This campaign led to our biggest football season in history,” Cooper says. “From September to February, Wonderful Pistachios experienced a 25 percent growth and brought in 700,000 new households.”

The Wonderful Nut campaign is part of the largest health campaign the company has ever launched, according to Cooper. “We’ve also extended the campaign into our influencer program, including our Mindful Nut, ‘Yoga Girl’ Rachel Brathen, recognized by Forbes as a top fitness influencer, as well as our Skinny Nut, Allyson Felix, 2012 Olympic champion track and field sprinter.”

Silvester says when it comes to display size, bigger isn’t necessarily better. “Retailers should use floor displays that take up minimal space while still attracting the customer’s eye. Setton Farms displays feature callouts such as ‘California Pistachios’ and the AHA Heart Check Mark, Gluten Free and Non-GMO logos prominently, which consumers look for.”

Consumer education remains important. Inclusion in retailer health-focused recipes “can open the eyes of consumers to the many delicious ways pistachios can be used, while boosting intake of protein and nutrients,” says Hirigoyen.

Packaging also influences sales. “The industry trend has moved to packaged pistachios for optimal freshness in a sealed bag,” says Huckabay. “A reclose bag will also keep the nuts fresh for repeat snacking.”

Major bin displays of his brand, points out Cooper, “are proven to have more than two times the lift in sales velocity. To maximize its merchandising, Wonderful provides its retail customers with high-graphic POS materials to build eye-catching displays.”

Consumers are seeking pistachios in all sizes, says Hirigoyen, and are finding new eating occasions for them, whether as a portable snack or for larger occasions. “Therefore, as people find new reasons to eat them, packs tend to change and are often sold up to 32-oz. packs for inshell, 8-oz. for kernels, and of course bulk. Pricing varies by retailer.”

Pistachios are predominantly sold in packages, of course, but Hirigoyen says she knows from consumer research shoppers don’t care about brands when it comes to pistachios. “The family brand or store brand is as desirable as any other.”