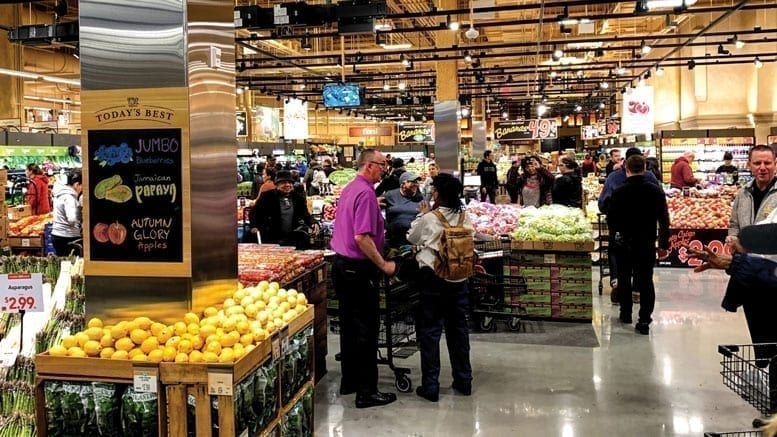 Brooklyn store features less space but still packs a punch when it comes to a colorful array of fruits and vegetables.

Wegmans has opened its first store in New York City and, although smaller than its typical supermarkets, it has a vast produce operation on a scale with its full-sized stores.

The store, located in the historic Admiral’s Row section of the Brooklyn Navy yard, across the East River from Manhattan, has been a long time coming.

“We announced it four years ago,” said Jo Natale, a Wegman’s spokesperson, at the store opening.

Construction coincided with the larger development of the Admiral’s Row renovation and, so, was not a typical store opening project for Wegmans. Still, the densely populated area around the store promises investment returns that should make it worth the wait. In fact, a long line of consumers lined up for the 7 a.m., October 27 store opening in the dark and as tropical depression rain fell.

Although the nearest Wegmans store to the Brooklyn location, in Woodbridge, NJ, runs about 130,000 square feet, the Admiral’s Row store is little more than half that size at 74,000 square feet. The reduction was accomplished largely by shrinking grocery and non-food. As a result, the service and perishables departments are the same size or similar in scope to full-size Wegmans stores. That includes produce, says Natale.

Because of Wegman’s approach, the produce section, as consumers enter the store, is the introduction to the sales floor, along with bakery. Table displays of core vegetable items, with prices prominently displayed, including broccoli, onions and asparagus, greeted shoppers as they entered the Wegmans location for the first time. The initial presentation gave way to displays of fruit, including a wide variety of in-season apples down the center of the department. The store’s own display of fresh-cut vegetables led off the refrigerated case on one side of the department. An independent presentation of fresh-cut fruit took its place along the center of the other wall.

A substantial organics display followed fresh-cut vegetables in the cold case. Situated in displays in and around similar conventional items, organics took a conspicuous place in the produce department, identified with dedicated signage throughout.

At the back, the produce department houses a floral section that includes various bouquets and some live items as well.

Meal elements are an important element of the Wegmans Brooklyn produce presentation. Not only does the department offer multiple prepared salad variations, but also a Heat & Eat section. And it should be noted that produce is prominent in the Wegmans deli/prepared meal operations in the form of salads, side dishes and even as part of main courses.