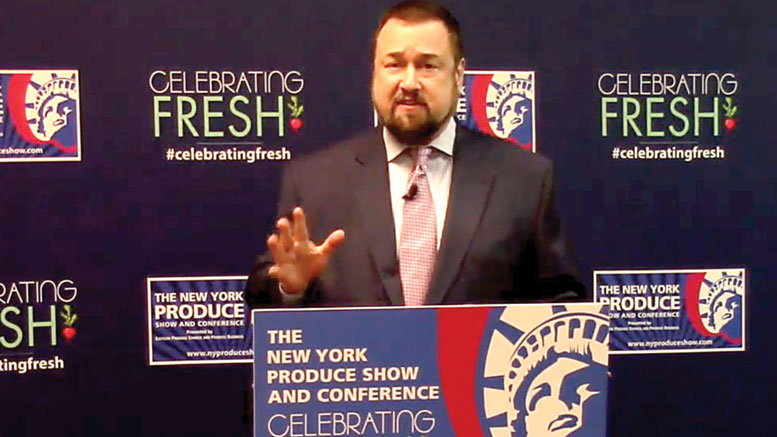 Jim Prevor's Keynote Presentation and other recordings can be viewed on: https://www.nyproduceshow.com/2020-show-recordings/ as well as Jim Prevor’s PerishablePundit.com

New modes of activity — such as a virtual show — require new ways of taking advantage of opportunities and even news ways of evaluating success.

The New York Produce Show and Conference had its 11th edition this past December, but it was a show different than anything that had come before. The coronavirus and, more specifically, New York State and New York City laws and regulations limiting gathering to only 50 people, made a live event impossible. With the vaccines flowing, the 2021 event is already scheduled to be live and back at the Javits Center for December 13-17, 2021.

So in the grand produce tradition of making lemonade out of lemons, we created a unique virtual event. Our goal was, of course, to create a valuable experience for the industry. We wanted marketers to be able to market and buyers to be able to buy, but we wanted everyone to be able to learn.

How did it work out? Well, there is no question there was enormous value available, and industry members from every facet of the industry shared positive takes. It is also true that new modes of activity — such as a virtual show — require new ways of taking advantage of opportunities and even news ways of evaluating success.

So, for example, in a live show many buyers visit exhibitors who they never really intended to meet. Buyers walk down an aisle, and they see old friends who used to work with the buyers when they were employed three jobs ago. They say hello, ask how life has been; they discuss what they are each doing now and, very naturally, move into a discussion about how they could work together today.

Or a specific commodity buyer, perfectly content with his apple or grape suppliers, walks down the aisle and sees a new variety he is not familiar with and, never having intended to talk to that vendor, begins a conversation.

The digital experience is different. The job of going into each individual “booth” requires an intent and an effort, and few buyers are going to do that for several hundred booths.

In addition, there is a time constraint that is more severe than on physical show. When a buyer wants to go to a trade show, he generally needs corporate approval. When this is received, the office knows he is going to be at the show and, although it is true that with cell phones people are always reachable, subordinates also are inclined to only bother their bosses or co-workers when necessary if they know they are at an event out of town.

The bright part of these digital events is that there are many more important attendees from around the world and deeper within the organization. Normally, both time and money are issues. But anyone can log in from wherever they are, at no cost (in our case), and, typically, they don’t bother getting permission. However, they are also still doing their normal jobs, so they are unlikely to commit to a whole day of participation.

On the exhibitor side, this means most exhibitors will typically experience fewer “walk-in” attendees than they would at a typical live show. But…and it is a big but… the attendees who do come into a virtual booth are typically more highly motivated.

Training your team to understand success in this brave new world is imperative. For example, several exhibitors shared that they had many fewer visitors at their booth than they typically do at the live version of the show. However, they reported visitors who they hadn’t met before from major companies, such as Walmart. In many cases, these important buyers made the effort to visit that particular exhibitor to discuss a new product they had heard of or because they were no longer working with their competitor and were seeking another supplier. That makes these visits almost always higher caliber than a chance encounter by someone walking down a hall.

The bright part of these digital events is that there are many more important attendees from around the world and deeper within the organization.

In fact, in our discussions with exhibitors, we found that the high-level executives of the exhibiting companies were more pleased with the results. This was mostly because the CEOs and owners expected that an introduction to the top produce executive at a major buying organization will eventually pay off — even if it might take several years. The typical salesperson, not knowing if they will even be at the company in a few years, was more transactional, looking for short-term results.

Our digital system tracked many communications between exhibitors and attendees. Basically the exhibitors broke into three categories: Some just sat silently in their booths waiting for buyers to visit; some reached out to many but with a standard approach: “Are you interested in learning more about our company and our fantastic potatoes,” and a third group showed they had researched the buyer organization in attendance and offered more specific reasons for meeting: “At your new store concept you just opened in Pennsylvania, I noticed you made a major effort to showcase your variety in the apple category. We have an incredible new variety, not yet in volume for big chains, but we could work out an exclusive for your new concept on the East Coast for a couple of years while you are building out. We’ve done consumer research and it consistently beats every apple out there in flavor. Would you like to do an online session to discuss?”

Not surprisingly, the salespeople who had done their homework, knew what a buyer was likely to be intrigued by and offered something to match were the people who buyers responded to. Now this is probably true of live interactions as well, but in a live show, the buyers will see many things by just walking the event, and so meaningful conversations are started by the buyers. In the online world, they may never go into the booth and see what a vendor is promoting, so they don’t express interest.

Obviously, if this brave new world continues, then, of course, staff would have to be trained to maximize effectiveness in this virtual environment. But, even if things return to “normal” with the vaccine roll out, the data generated through watching this virtual experience indicates that vendors could get much better results from live events if they were better prepared. From knowing a lot about potential customers and their operations, to understanding the various concepts they run and what products they currently sell and from which vendors they currently buy, exhibitors would have much more success inviting buyers to meet at their booths.

The questions being posed by vendors to buyers were generally weak, and only a few people seemed to have done much research. Much of the outreach that happened was about themselves, their company and their products — but not about the client. The transparency of the portal made it clear that most vendors would do well to consider how to better prepare their teams for trade shows and interaction with buyers.

We also offered a great way for industry members to gain insight into what is happening in the industry. In addition to remarks from New York States Commissioner of Agriculture, Richard Ball, and the President of the Eastern Produce Council, Susan McAleavey Sarlund, we had a star-studded lineup of industry luminaries sharing what they had experienced and learned from the pandemic. [Editor’s note: please see full list of speakers below]

You can, or will soon be able to, listen to all the presentations at our New York Produce Show website — https://www.nyproduceshow.com/2020-show-recordings/ — and on PerishablePundit.com

Obviously a vendor looking to sell buyers would be smart to hear what they have to say, to learn what is on their mind, and to assess how current events are impacting the buyer’s thinking.

The speakers had an intense and broad audience, but the viewers were not necessarily the same people who were exhibiting at, or attending, the expo. This is interesting because, obviously, during a live trade show, it is difficult to leave one’s booth to go attend seminars. This format, however, allowed anyone willing to come in early or stay late to listen.

Some of the interviews, of course, were with non-buyers but they are all carefully selected. So, David Marguleas from Sun World is not a buyer, but he sits at the epicenter of new variety development. Wendy Reinhardt Kapsak is not a buyer, but she is all about how we get more consumer interest in produce. Any vendor would find that being up to date on all these things makes them more interesting and valuable people, and so it makes buyers more interested in talking and staying in touch.

We look forward to seeing everyone back again this coming December to a live event. There is nothing like an in-person experience, going out to a Broadway Show, catching a game at Madison Square Garden, enjoying the culinary experience in New York. If, however, we are willing to learn from the digital event we hosted, it will be a more successful, and profitable, event for all.

2020 Event Amasses Marketers And Buyers From Far And Wide