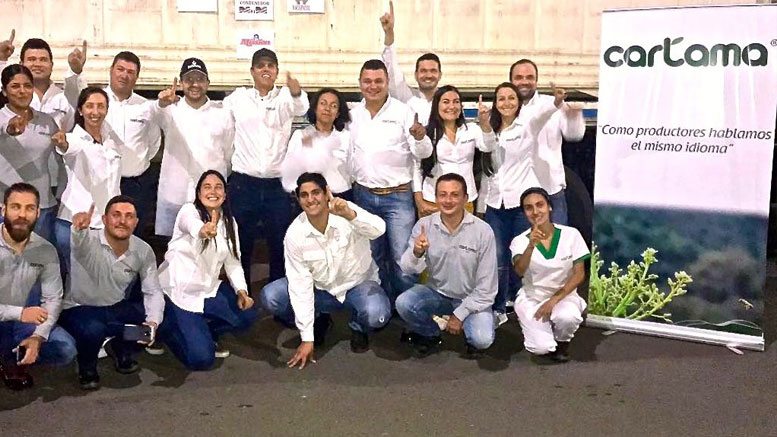 Buyers who reconsider Colombia as a source may discover their own gem as the country increases the variety of its exportable offering. 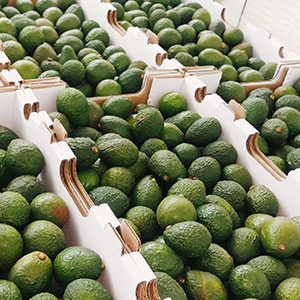 Colombia enjoys a long tradition of exporting a diverse assortment of produce to Europe as well as a more limited variety of items to the U.S. market. According to statistics from PROCOLOMBIA (the country’s trade and investment promotion entity), Colombian exports of fresh fruits and vegetables reached US$1.05 billion in 2016 (FOB value), a 17 percent increase from 2015. Of that, the U.S. represented Colombia’s second destination with an export value of US$198 million. “We continue to develop more and more possible options for produce exports to the U.S.,” says Juan Camilo Barrera, PROCOLOMBIA’s food, beverage and floral director for the U.S. market in Miami, FL.

Colombia’s geographic location and rich natural resources, according to Ricardo Uribe, general manager at avocado producer Grupo Cartama in Medellín, Colombia, make for ideal conditions and position the country as a potent ag exporter. “We have the discipline to export well as evidenced by the floral industry,” he says. “And we have different climatic zones that allow us to offer the fruit to market 12 months of the year as in Hass avocados – a real plus to clients looking to have consistent fruit at the best quality.”

Jorge Enrique Restrepo, executive director at CorpoHass in Medellin, Colombia notes Colombia is well situated at the top of South America with ports on Pacific and Atlantic oceans. “This means transit times to either U.S. coasts are excellent,” he says. “We have very favorable maritime service and schedules.”

Colombia’s welcoming of investment aids in developing exports. “Colombia is open to reaching new markets but also promotes and supports foreign investment in the sector,” says Barrera. “There is availability of land, but there is also a need for additional packing houses and we welcome companies who would like to partner and help Colombian production grow.”

U.S. buyers and importers are encouraged by Sandra Riano, sales manager with Novacampo in Funza, Colombia, to consider the advantages they can find in Colombia. “Change is always a challenge but if you don’t change, you don’t grow your business,” she says.

Known best perhaps for coffee, flowers and bananas, Colombia continues to develop an increasingly diverse portfolio of produce for export. “Colombia currently exports bananas, plantains, fresh herbs, limes, pineapples, yams, and goldenberry to the U.S.,” says Barrera. “Of these bananas and plantains continue to be leading products, but there has been a very interesting spike in exports to the U.S. on fresh herbs, pineapples and goldenberry.”

Barrera explains the ease of importing herbs is due in part to the ability to piggyback on the logistics infrastructure of the floral industry.  “The U.S. imports 87 percent of Colombia’s fresh herb exports,” he says. “In 2016, Colombia exported over US$31 million or 7,939 tons, doubling the exports of 2010.”

Case in point, in August Bengala Agrícola began to work with Giumarra of Los Angeles, CA, to provide a 12-month supply of premium-quality golden pineapple grown in the Valle de Cauca, Colombia. 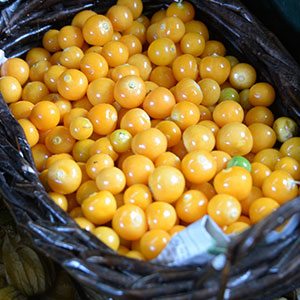 Colombia’s successful but limited produce trade relationship with the U.S. has been infused with new energy thanks to several phytosanitary rulings in the past few years allowing products easier admissibility into the U.S. In 2015, USDA established new protocols to allow Colombia to export goldenberry (a.k.a. uchuva or physalis) to the U.S. without having to undergo cold treatment.

Carlos Lozano, coordinator for the goldenberry export committee at ANALDEX (an export association) in Bogota, Colombia, reports production and exports are on the increase. “Colombia currently cultivates about 1000 hectares of goldenberry and has exportable volume year-round,” he says. “This year we expect total exports to all our markets of about 6,000 tons or US$28 million.”

Bogota’s Frutireyes, the largest producer of goldenberry in Colombia with 300 hectares, has been growing for over 17 years and exported to the U.S. previous to 2015 under the stringent cold treatment requirement. “The quality now without cold treatment is significantly better and will open up real opportunity in the market,” says Luis Alberto Reyes, director of Frutireyes.

Since goldenberry is still a largely unknown product, even though it existed from other sources in the U.S. marketplace previous to 2015, Colombian exporters look to help build the market. “Colombia has the potential to provide programs with significant volume for marketing,” says Novacampo’s Riano. “Our geographic location means we can provide product quickly and cost effectively for promotion.”

Novacampo has exported some small shipments of goldenberry but not at all in comparison to the volume shipped to Europe. “We want to develop the clientele in the U.S. and have a regular program like we do in Europe,” says Riano.

The health aspects of goldenberry offer tremendous potential for merchandising to U.S. consumers according to Reyes. “Goldenberry is a new super fruit,” he says. “It has very high nutritional value that can be promoted. It provides another option for health conscious consumers looking for variety.”

Barrera believes goldenberry can offer a new option to consumers looking to explore new flavors as well as health. “This exotic fruit contains more vitamin C than an orange and is high in antioxidants,” he says. “Its color, texture and husk make a versatile fruit that can be used in cocktails, salads, desserts and sauces, as well as garnishes and many other options.”

An additional unique and trending aspect for Colombian goldenberry is its social impact. “This product makes a significant social impact because the majority of the workers are rural women who are head of their households,” says Lozano.

Frutireyes manages 400 employees of which 90 percent are mothers who are heads-of-household. “The social impact of the goldenberry industry is amazing and is a terrific story to tell consumers,” says Reyes.

Though Colombia is well known for its brilliant green emeralds, another valuable green has been brought to light as the U.S. allowed entry of Hass avocados from Colombia beginning in fall 2017. “Our country has dedicated years to prepare for this,” says Barrera. “We estimate that we now we have more than 14,000 hectares sown, 70 percent of which will have already passed its third year in 2018 and should be available for production starting next season.”

Colombia is actually the world’s third largest producer of avocado, and the largest in South America. “Though the Hass variety represents a fraction of current production, every week we learn of new areas being planted in different regions of the country,” says Barrera.

CorpoHass’ Restrepo notes although Colombia produces year round, peak season is November through March. “And, we also have a secondary peak from June to August,” he says.

Cartama boasts 17 years growing and marketing Hass for the domestic and international market. “Additionally, we bring more than 30 years of agricultural experience,” says Uribe. “In recent years, Cartama has expanded its production to 1,000 hectares and a packing plant located in the city of Pereira.”

Uribe shares the industry’s objective is to position a high quality fruit from Colombia. Thus, the growers and marketers formed CorpoHass to work together toward positioning the Colombian Hass at an international level. “We come to the U.S. market with outstanding quality fruit that will conquer the consumer and eventually grow our export volumes,” he says. “Though the U.S. market currently receives fruit from other countries, we are committed to achieving our own space in the market and contributing toward a market where demand exceeds supply.”

Another sign of Colombia’s coming of age is its hosting of the IX World Avocado Congress in 2019. “We are honored and excited to be hosting this event in September 2019 in Medellin,” says Restrepo. 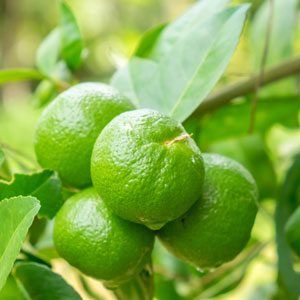 Another product catching the attention of exporters and U.S. importers alike is blueberry. “We have identified a handful of companies seriously committing to this product,” says Barrera. “Some of them are branches of the floral industry, which makes them an ideal candidate to take the product to a big scale if initial efforts work well.”

Colombian Blueberries are already admissible to the U.S. “They can be shipped to all ports and must be treated either via cold treatment or methyl bromide,” says Barrera.

Other future products include oranges, where companies on both sides are currently waiting for USDA’s APHIS (Animal and Plant Health Inspection Service) to reactivate permits according to Barrera. Limes represent another growing opportunity as the U.S. currently accounts for 24.1 percent of Colombia’s lime exports, according to PROCOLOMBIA. “In 2016, Colombia exported US$7.4 million or 8,193 tons of fresh limes worldwide,” says Barrera. “Colombia currently exports limes to the U.S. mostly between January and may.”

Novacampo reports exploring exporting more limes to the U.S. “We have excellent quality limes all year round so we can fill gaps in the market,” says Riano. “Colombia has a very high quality lime with a deep green color and high juice content.”

Colombia looks to develop more organic products as well. “There has been a growing interest of some of our exporters to switch their production to organic,” says Barrera.

Huertos Verdes in Madrid, Colombia, grows about 350 hectares of various USDA certified organic products and is currently focused on organic limes and ginger for the U.S. “We export a weekly container of organic limes to Europe and foresee the U.S. market holding a lot of potential for us,” says Leonardo Bruinsma, manager. “Our organic ginger will be available beginning in February 2018. We like to say we plant confidence. Buyers can be confident in what they get from us and we work hard to develop the products according to what the buyers want.”

Rising yam (or ñame) exports are another crop with significant social value. “In Colombia, yam has been an important source of family employment in the Colombian Atlantic Coast for decades,” says Barrera. “In 2016, Colombia exported US$3.2 million or 3,347 tons of yam of which the U.S. imported 78 percent. We’ve seen consistent growth in yam exports in the past six years and expect it to continue.”