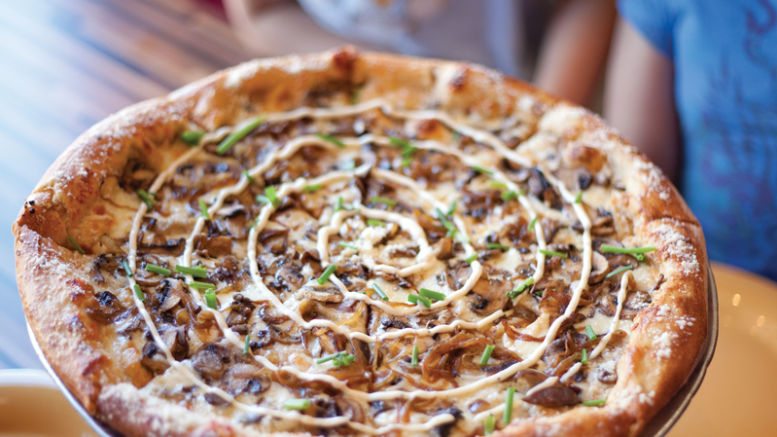 Experts have noted an attitude change in American consumers this year. They are looking for change in 2016, and change is what they will encounter, at least when it comes to mushrooms at restaurants. The establishment white variety is dominant, fully 60 percent of mushroom sales in the United States in 2015, according to the United States Department of Agriculture (USDA). However, brown mushrooms (Portobello and Cremini) have sliced away at that dominance and now represent about 31 percent of sales. Portobellos have found wide acceptance in dishes like the ‘Shroom Burger served by the wildly popular New York-based Shake Shack chain. In the bun is a crisply batter-fried Portobello filled with melted Muenster and Cheddar cheeses plus the familiar toppings.

Specialty mushrooms – Shiitake, Oysters, etc. — still only comprise about 2.4 percent of national mushroom sales, but they were up 14 percent over the previous year, according to the USDA. Now, you would expect to see exotic mushrooms at fine dining establishments like Verge Restaurant in Los Gatos, CA, where chef Albert Nguyen-Phuoc fills his mushroom cobbler with Parmesan and Humboldt Fog goat cheese and Cremini, Shiitake and Oyster mushrooms. Types of fungi most diners hadn’t heard of a decade ago are also muscling their way onto mainstream American restaurant menus by name in dishes that formerly said simply “mushrooms.” And the available choices have increased beyond fresh farmed including organic to encompass foraged, processed pre-blanched mushrooms, IQF (individually quick frozen), dried mushrooms and powdered mushrooms.

Let’s Hear It For Umami

In the past few years most of the foodservice mushroom news has been about blending, combining mushrooms with ground or chopped protein. Blended burgers have become hugely popular in university foodservice operations. Blending in mushrooms with their umami characteristics gives diners full savory flavor but reduced cost, salt, calories and environmental impact. “As consumers have become more adventurous in trying mushrooms, chefs and foodservice companies have been able to gradually add more mushroom varieties to the menu,” said Katie Preis, marketing manager for the Redwood Shores CA-based Mushroom Council.

“Sales of Shiitake mushrooms are steadily growing outside of Asian cuisines where they are a popular ingredient. We’re seeing Shiitakes a lot in pasta dishes and on pizza because they keep their crunch,” she says.

Mushrooms are also graduating beyond their longtime role as sidekicks, add-ons or just an ingredient.

“We’re seeing King Trumpet mushrooms cut lengthwise, grilled or roasted and served like ribs with barbecue sauce. Maitakes are being used like pulled pork in a way because of the texture,” says Preis.

This expansion of the mushroom varieties and uses has been a direct response to strong trends among diners, says Preis. Consumers have shown increasing interest in meatless, gluten-free and healthier dining, as well as ethnic and authentic cuisines, and locally sourced and organic ingredients. The National Restaurant Association recently named local ingredients as the No. 1 hot culinary trend in 2016.

Mellow Mushroom, the quirky, 190-restaurant Atlanta-based chain, takes its namesake seriously even if it is not in every dish. The company reports that it uses more than 875,000 pounds of mushrooms per year on pizzas and in soups and other dishes. “Mushrooms are very important to Mellow. We use a variety of fresh mushrooms including Portobello, Shiitake and Button. While they can be added to most anything, three of our most notable dishes are our Magic Mushroom Soup, our Stuffed Portobello Mushroom and our Holy Shiitake pizza,” says Annica Kreider, director of brand development for Mellow Mushroom. Magic Mushroom Soup is a wine and herb broth with Montamore cheese and grilled Shiitake, Button and Portobello mushrooms.

The biggest foodservice mushroom trend out there is blending – combining mushroom with ground or chopped proteins, but a quieter incremental change has taken place over the past decade. “We’re seeing our bigger foodservice customers steadily moving away from white mushrooms to brown mushrooms for the flavor and the marketability,” said Kevin Delaney, vice president of sales and marketing at Avondale, PA.-based To-Jo Fresh Mushrooms, a fourth generation family farm.

Brown mushrooms have turned out to be the gateway mushroom that led diners to more adventurous tastes. “Consumers have grown from White to Brown mushrooms and then they try Shiitakes, then an Oyster, Enoki or Trumpet. The flavors get a little more intense as they move up and the prep and cooking can get more complicated,” says Delaney.

“It’s a big sign that consumers are open to bigger flavors and want to keep enhancing their palate,” he says. “I’m seeing many more restaurants using sliced Portobello on top of burgers and bringing in specialty mushrooms to combine with everything from couscous to quinoa. There is also a rising demand for organic mushrooms in foodservice, not just at chef-run restaurants,” he says.

“Chefs are fully embracing a variety of mushrooms including substituting fried Shiitake mushrooms for bacon or utilizing Portobello as a “crust” for a mini-veggie pizza. Sales of sliced and whole Shiitake mushrooms are increasing. A real up-and-comer is the Royal Trumpet mushroom,” says Litvin, adding that chefs need to find ways to educate diners about mushroom varieties to expand their palates.

The artisan pizza movement has been a boon for small growers like Fort Collins, CO-based Hazel Dell Mushrooms, according to owner Jim Hammond. Hazel Dell’s certified organic mixed mushrooms, including Shiitake, Oyster, Lion’s Mane, Royal Trumpet, Maitake, Cinnamon Cap and Cremini, have become a popular topping at the growing number of wood-fired pizzerias that turn out individual pies in less than three minutes. “You see them sauteed with a white sauce and arugula on a pizza and pick up a nice smoky taste,” says Hammond. Cinnamon Cap mushrooms grow in clusters of orange caps with long stems with a nutty flavor and they keep their shape when cooked, he says.

Hazel Dell Mushrooms are sold primarily in the Rocky Mountain region to grocers, individual restaurants, as well as caterers and foodservice. The company’s most popular new mushroom in foodservice is the Royal Trumpet. “It’s thick and meaty — an inch diameter stem usually, and five or six inches long. It’s really good grilled or smoked and served in barbecue sauce. Maitake (or Hen of the Woods) mushrooms are popular, too. They have a really good flavor,” says Hammond. “Chefs are looking for ways to distinguish their menu using mushrooms. One of the best ones I’ve seen is a Chanterelle cappuccino. It’s a soup served in a coffee cup with a fancy, frothy top.”

Mushrooms fill a lot of needs for consumers increasingly focused on health. “Meatless Mondays are helping mushrooms gain popularity as well, encouraging consumers to try produce items as alternatives to their usual proteins. Mushrooms happen to be one of those lucky foods that take on a broth-like or meaty flavor that comes in handy in preparing healthy dishes. That umami flavor is so robust, it allows you to use less salt when cooking. Since mushrooms are a low-energy-density food you’ll get fewer calories in larger food portions,” says O’Brien.

Chefs will continue to debate whether cultivated or foraged mushrooms have a better flavor. “Several wild mushroom varieties are now being cultivated, it doesn’t matter to me that these ‘wild’ mushrooms are not really wild. They have the flavors and textures of wild mushrooms I have gathered in the Provençal countryside – and they don’t require the meticulous attention and cleaning that real wild mushrooms require,” he says.

To fungi experts, it’s just important to be accurate. “Exotic” doesn’t mean “wild,” or foraged from the forest. “More chefs are using exotic cultivated mushrooms like Maitake, both roasted as a side and in winter braises. They are delightful,” says Eugenia Bone, James Beard Award-nominated author of “Mycophilia: Revelations from the Weird World of Mushrooms” (Rodale). Bone urged chefs and restaurant companies to be careful when describing the sourcing for mushrooms. “Chefs often call farmed exotics like Oyster, Shiitake and Lion’s Mane ‘wild mushrooms’ on their menus. They are not,” she says. Foraged mushrooms are usually available in smaller quantities, at variable prices and they have a shorter season, all reasons chefs prize these fungi. “The chefs like that they can offer a premium local produce item, especially, in the winter, and tell diners where it was grown. We send out a weekly availability report letting restaurants and retail know which varieties are available and what’s coming next,” says Kevin Delaney of To-Jo Fresh Mushrooms.

Besides cultivating Shiitake, Oyster, Royal Trumpet, Maitake, Enoki and Beech mushrooms, To-Jo Fresh Mushroom maintains a network of professional foragers. “We worked very hard to set up a safe system with some of the best foragers harvesting out there,” he says.

Restaurants are always looking to get an edge on the competition with a unique ingredient. “Chefs love to be able to use local ingredients and mushroom growers are often local or regional,” says Joseph Salvo, president of Ponderosa Mushrooms. The Port Coquitlam British Columbia-based company grows and distributes cultivated and wild foraged fresh mushrooms, IQF mushrooms, dried mushrooms and mushroom powders.

No matter what form the mushrooms take, Salvo says chefs and foodservice operations actually have simple demands. “If you can provide chefs with a consistent product it makes it very easy but the quality has to be there. Pound for pound mushrooms are one of the most expensive ingredients in the kitchen. That’s one reason we see the use of frozen mushrooms increasing every year because of the convenience and dependability of supply,” he says.

Ponderosa’s business has grown steadily as more restaurants are identifying individual mushroom varieties on their menus. “The market ranges from small ma-and-pa Italian restaurants to high end caterers. A big part of the business is institutional sales. We also create custom mushroom blends for chain restaurants,” he says.

“King Oyster mushrooms seem to be getting popular really fast. They are part of our chef’s mushroom mix that includes sliced or chopped white, brown, Shimeji and five other mushrooms, cleaned and pan-ready,” he says. The mix is used in everything from omelets and soups and side dishes.

Shimeji mushrooms are still largely unknown to most diners. “Seven years ago I couldn’t give Shimeji away. Nobody knew what they were. Now we move all that we grow as soon as we have them,” says Salvo. Shimeji are almost always cooked to remove a slightly bitter taste and have a firm, crunchy texture and nutty flavor.

Ponderosa’s wild foraged mushrooms include Morel, Porcini, Chanterelle and Matsutake. “We have the largest forager collection network in the industry with foragers in Nova Scotia, Saskatchewan, British Columbia and northern California which are processed at a facility in Vancouver,” says Salvo.

Many of the restaurant chefs that order mushrooms also choose from Ponderosa’s wild-harvested foods including fiddlehead ferns, ramps, wild onions, stinging nettles and huckleberries as the seasons roll along.

Powdered mushrooms have also taken off, according to Salvo. “We have a full line of mushroom powders we grind that are used in a lot of soups and sauces. Some chefs are rolling steaks or chicken in ground dried Black Trumpet mushroom powder. It’s just a fabulous flavor when you saute it and it gives a nice dark color,” he says.

When it comes to commercial mushroom growing the perennial search is for the next variety of mushroom that will be as popular as Portobello and Cremini, but the answer may be consumers will be open to many varieties including some familiar ones. “I think the next big thing will be Shiitake. Everybody knows about Shiitakes but they still aren’t widely distributed and used on a lot of menus,” he says.

“It has taken a long, long time to get to this point and there is a lot of room for growth,” he says.

Mushrooms On Menus: Portobello And Beyond

Mushrooms are Having Their Moment

Los Cilantros Serves Up A Most Vibrant Experience