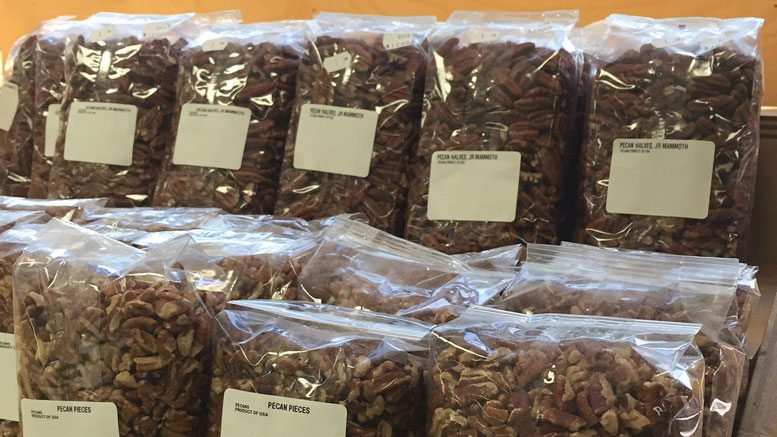 All Photo Courtesy of Tropical Foods 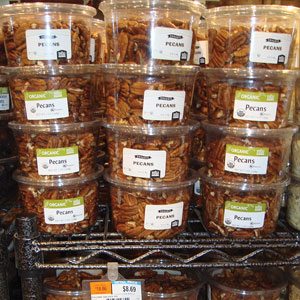 With their buttery flavor, delicate balance of sweet and bitter, and gentle crunch, pecans have a beloved place at the American table. As North America’s only commercially produced native nut, they’ve earned devoted loyalty. We enjoy them in traditional favorites such as pecan pie, or tricked out in a gourmet-style marinated beet and goat cheese salad or crusting a tender steak of pan-fried halibut.

The pecan industry is poised for growth with increasing domestic and global demand and a newly passed Federal Marketing Order (FMO), which is a self-help program overseen by USDA that provides pecan funds to be spent by pecan marketers for the benefit of its industry. Because pecans are grown commercially in a broad region encompassing 14 states, industry players have historically operated somewhat independently, but the dynamic will change with the new FMO.

“Walnuts, almonds and pistachios have had FMOs that allowed a lot of exciting opportunities in terms of providing resources to the retailer: display pieces, standalones, point of sale materials, and collateral,” says Vickie Mabry, executive director of the National Pecan Shellers Association, headquartered in Atlanta, GA. “This October, they’ll start to collect assessments, so there’ll be more resources available to the pecan industry promoting proper storage and sales to providing point-of-sale material, and building consumer awareness for pecans as the great-tasting alternative. The pecan industry will have somewhere between 6 to 8 million dollars at its disposal.”

Increasing demand in Asia helped keep requests and prices relatively high. U.S. pecan exports increased by 28 percent from 2013 to 2014, according to the USDA. The total domestic crop increased 12 percent during that interval, totaling 264.2 million pounds, as tallied by the National Agricultural Statistics Service.

The popularity of pecans soared as consumers recognize their healthful qualities. “People are learning pecans are high in antioxidants. People are more health conscious, which influences sales across the country,” notes Richard Merritt, owner of Merritt Pecan Company in Westin, GA. “We’ve seen consumption pick up, and we look for that [increase] to continue.”

Mabry agrees. “If you look at all foods for highest antioxidant level, pecans are No. 13. My advice to move pecans is to focus on health-conscious consumers. Look at blueberries, salmon, kale, and pair pecans with other products that are healthy. Group them together, for example, to promote a salad.”

Enticing packaging is crucial, experts agree. “Clear packaging: tubs or bags,” says Chad Hartman, director of marketing at Tropical Foods and Healthy Home Market grocery stores in Charlotte, NC. “We find consumers are very savvy about pecans. They like what they like, and they want to see a nice big pecan in that bag, so showing them the product is always the best strategy.”

“We started packaging nuts in those acetate tubs,” says Merritt. “We think it shows the product better, and it is easier to handle.” In the brand’s Weston, GA, retail store (Merritt Pecan Co. & General Store), the company found great success selling pecans in commuter cups, enabling customers to snack as they drive. The company also offers 5-pound bags, which are popular among bakers.

Mabry points out that stocking a variety of options is key. “In almost every recipe, you’re chopping up pecans, and consumers almost always go for the halves. Pieces offer the same benefits and take less time, so offer pieces and halves in easy-to-grab, 1-pound packages.”

Where should pecans be located in the store? “You must have product where consumers are looking for it,” notes Hartman. “For example, baking supplies and with nuts and produce are two places where people look for them year-round. During the holidays, you should add in the holiday displays.”

A Versatile Nut With Gourmet Appeal

Both plain and value-added pecans have an enduring gourmet appeal, and retailers should emphasize the healthy, delicious ingredient all four seasons. “We’re working on recipes and usage of pecans, which is not seasonal, says Al Pearson, fourth-generation owner at Pearson Farm, in Fort Valley, GA. “With good storage, we can eat pecans all year, from adding them to pancakes to salads.”

Mabry recalls the lessons learned at the Pecan Chefs Summit, hosted by the National Pecan Shellers Association near Atlanta, GA. “In prepared foods in the deli sections, pecans offer great visual appeal and up the game,” says Mabry. “They’re perceived by many, and certainly by chefs, as a high-end, added-value to salads — or other products for that matter.” Chefs at the summit also favored roasting pecans to bring out the flavor, and Mabry notes roasted pecans are also a time-saving alternative to offer at retail.

To maintain the best quality, retailers must store pecans properly and rotate stock. When a properly stored pecan goes out on the floor, “It has eye appeal,” says Dora Miller, packing manager and quality control manager at Alamo Pecan and Coffee Company, in San Saba, TX. “You just have to put out a good product that’s plump, light in color, full meated, not dry, and has rich flavor.”

At Pearson Farm, the company relies on cold storage. “Long term, they should be frozen, and short term, they need cold storage to stay at their peak,” advises Pearson. “If the pecan has been stored right, it will be easy to sell.” Mabry agrees. “For pecans, shelf stability is much stronger if they’re refrigerated. So the best way for the consumer to get the best quality and the best tasting pecans is if they’re found in the refrigerated section.”

“We get people chomping at the bit right up until we have a new crop of pecans arriving
in our building. It’s a huge deal, more than I’ve ever seen with any other nut.”

While Merritt agrees “refrigeration would be ideal,” he recognizes that the realities of retail dictate room temperature storage. “The main thing is to keep them fresh. What you see in some of your large grocery stores is too much product on the floor and they don’t rotate the product properly. If it sits too long, it will turn dark.”

The fourth quarter brings the new crop of pecans and the bulk of annual demand. According to Hartman of Tropical Foods and Healthy Home Market, consumers and retailers recognize the superior quality of a freshly harvested pecan. “We get people chomping at the bit right up until we have a new crop of pecans arriving in our building. It’s a huge deal, more than I’ve ever seen with any other nut. I would especially recommend sampling after a new crop. The pecans are super tasty, and it’s also right in the middle of the holiday season. As far as price, that fourth quarter is going to be prime time. My advice is, if you’re going to do TPR (trade promotions marketing) or other price reductions, then you should do it during the fourth quarter.”

At Alamo Pecan and Coffee’s retail store, “75 percent of the business is going to be October, November, December. And December is like 50 percent of it. It’s amazing,” says Miller.

Pearson affirms that traditional holiday recipes drive fourth quarter volume. “The holidays absolutely cause a spike in sales as people want pecan pie and sweet potato pie with pecans on top,” he says.

It’s not just holiday baking, says Miller. “If you’re trying to appeal to the gift-giving or the corporate-giving market, we found the natural pecans are by far the best seller for us, because people are so health-conscious. You’re looking again at everyone wanting a healthy, trim, versatile ingredient, which can be used in baking or raw eating or salads or usually any preparation right out of the refrigerator, and it’s a great on-the-go snack too.”