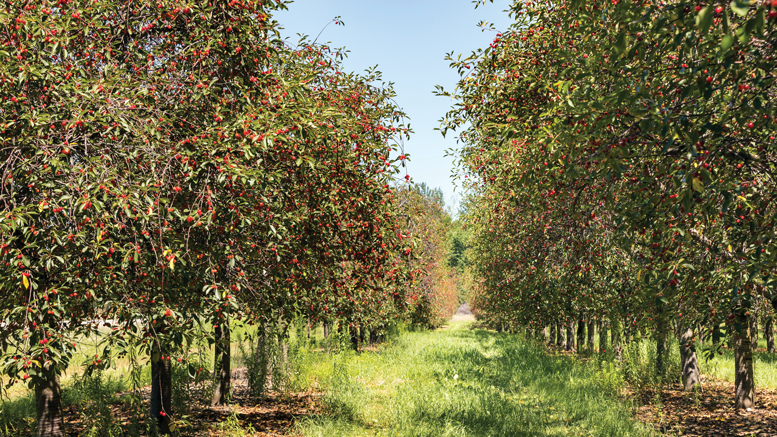 Though shortened by its northern climate, the season for locally grown produce is celebrated throughout the Midwest and as far south as Texas and Florida.

The state of Michigan has much be proud of when it comes to its fresh produce – and the state enjoys a host of advantages that account for its decades of success selling it.

“So many foods are produced here,” says Diane Smith, executive director of the Michigan Apple Committee (MAC) in Lansing, MI. “We certainly have a unique climate and geography, being surrounded by the Great Lakes. Water, cool nights, warm sunny summers … these are all factors in producing the best-tasting apples in the world.”

“Michiganders can tell the difference between fruits and vegetables grown in our state and those grown outside the state,” explains Heather Throne, grant and commodity program anager for the Michigan Department of Agriculture & Rural Development (MDARD), also in Lansing. “Our apples taste better than apples from different parts of the country. It’s due to the terroir (a French term used to describe the environmental factors that affect a crop’s characteristics) of the soil and the micro-climates unique to Michigan.”

You can get most anything you want fresh from Michigan, says Greg Bird, executive director of the Michigan Vegetable Council in Mason. “This means that the environment found here in Michigan is diverse, which allows this diverse production.”

Michigan has quicker turnaround from order to delivery compared to elsewhere in the states its growers and shippers service, and according to MAC’s Smith, “that equals fresher product. The local aspect is a great selling point in many of our surrounding states. The biggest challenge in the fresh-apple category is that there are so many similar varieties that it can be confusing to the consumer in some cases.”

Retailers looking to Michigan produce to generate strong sales should be well versed in what makes the state unique:

Soft fruit and melons are traditional summer favorites, and get more attention with in-store merchandising. Apples are often put on smaller displays, and not front-and-center, says MAC’s Smith. “We turn our crop every season in Michigan, which leaves us short on product in July until the new crop is ready.”

During the growing seasons over the summer months, there is a strong supply of Michigan produce. The biggest challenge in the marketplace is the pressure felt by imports of fresh produce from other countries.

According to Brian Coates, vice president of sales for Applewood Fresh Growers in Sparta, MI, some of the unique challenges and opportunities of selling Michigan fresh fruits and vegetables during the summer months include “weather impacts, the short season, unpredictable start-up and finish to the season. Then you have to consider LTL (less-than-trailer-load) freight. Many loads are partials, and it can be a challenge to find trucks to take care of them.”

Michigan is far enough north that its growing season is relatively short. Cold and wet weather can push planting back far enough to make it “tough to get everything out before cold returns,” Bird notes. Another challenge has been posed over the past several years by Canada and Mexico shipping an increasingly large amount of product into Michigan’s market during the same season.

Says Bird of the Michigan Vegetable Council, “Canada is a stone’s throw away, and there are major transportation routes directly to Chicago and Detroit.”

Distribution: Thanks to its geographic location, the state’s produce can be grown, harvested and shipped to a majority of the United States overnight. “That means fresh, delicious, nutritious Michigan produce is harvested one day and at your door the next,” says Todd Miedema, sales manager for Miedema Produce, Inc., in Hudsonville, MI.

The climate and proximity to major markets mean that retailers and their shoppers can pick from what Miedema describes as “a wide range of great products that arrive at your warehouse with a minimal carbon footprint (and) made in the USA. The only challenge is the lack of a year-round supply of some items.”

Lots of Michigan fresh produce gets distributed through contracts held with local and national wholesale distribution companies. The state sits between two large population areas in Detroit and Chicago. The bulk of Michigan’s produce stays in the Midwest and Great Lakes region. “However,” says Bird of the Michigan Vegetable Council, “some products like asparagus ship further based on the volume produced.”

Michigan apples are sold in 32 states and 18 countries, says Smith of MAC.

“If the product is fresh, it depends on the product and the ability to utilize technologies like controlled-atmosphere storage and cold chain to move it into regional, national and international markets,” notes Throne of MDARD.

Marketing: Michigan produce is marketed “by the sales organizations that sell it,” says Coates of Applewood Fresh.“(There are) not too many vegetable boards due to the short season. The Michigan Apple Commission is one of the few that has funding available. Some others do some social media and trade promotion.”

Growers and producers offer their produce to consumers at their local retailers, wholesalers, processors, farmers markets, farm stands, and CSAs (community-supported agriculture systems that allow consumers to subscribe to harvests from producers).

Bird concedes that marketing “is definitely a challenge here in Michigan. Being so diverse means that there is not one major product that can get a substantial push from the government or a large commodity group.” A few vegetable commodity groups do some marketing, “but these are still fairly small groups.”

Several commodity associations in the state have come together to form the Michigan Ag Council, which does marketing for all Michigan agriculture products. The state government provides grants that can be used for marketing, and provides marketing trips to major shows that focus on finding markets for Michigan products.

Coates recommends that retailers across the state promote the locally/regionally grown aspect of the produce. “Great quality. Less food miles. Diverse offering of fruit and vegetables.”

Organic/Greenhouse-grown: More organic vegetables are being grown each year, says Coates, “but it is still a small portion of the Michigan business due to the climate in Michigan making it more difficult to grow organically.”

Most produce grown in Michigan is available via traditional production practices and organic practices. Produce grown in greenhouses in Michigan, according to MDARD, includes cucumbers, tomatoes, strawberries, vegetable plants, and flowers.

Michigan does not have a large volume of produce grown in greenhouses, and is being pressured by produce grown in Ontario greenhouses. Says Bird of the Michigan Vegetable Council, “The majority of vegetable greenhouse production in Michigan is small-scale and sold at farm markets and roadside stands. The same is probably true for organics. There is quite a bit of small-scale, but limited large-scale, which is probably more sold for processing.”