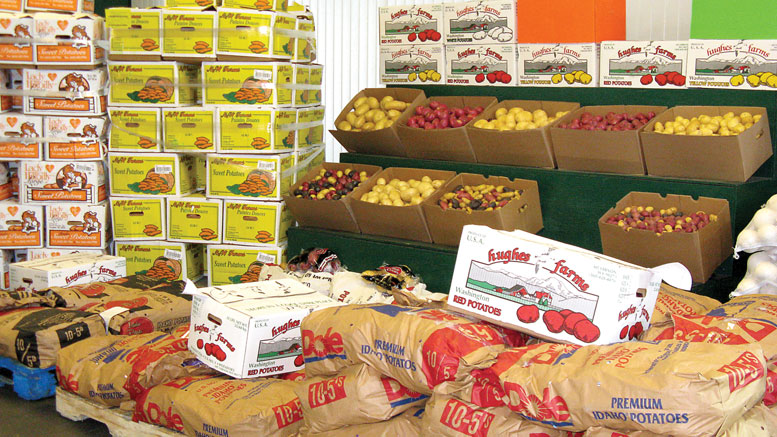 The Detroit produce market is as energetic and diverse as the Michigan consumers and businesses it serves — and remains vibrant even in the midst of the COVID-19 pandemic.

In a Detroit News op-ed earlier this year, Gabriel Ehrlich, the Director of the University of Michigan’s Research Seminar in Quantitative Economics, noted that while the city continues to face well-known challenges, such as an elevated poverty rate and relatively low educational attainment among its residents, its prospects were bright over the next five years. Detroit’s economy “should continue to grow, and it should outpace the state economy in terms of employment and income growth.”

In fact, Ehrlich continued, “We expect Detroit’s ongoing recovery to form a key component of Michigan’s economic growth through 2024… People are often surprised when they hear our outlook, but in fact Detroit’s economy has tended to grow more quickly than the state’s over the past five years — we are forecasting that trend to continue.”

Detroit’s economy has fared comparably to that of many other U.S. cities, according to Brandon Seng, co-founder of Detroit-based Michigan Farm to Freezer, which provides Michiganders greater access to regional produce. “COVID has had a significant impact on every section, and Eastern Market has been no different. Our vendors and merchants have had various results with pivoting their business models.”

“The independents that are here are strong and they’re steady, so they are another partner of ours.”

“Overall it’s been a 10-plus-year growing market,” says Dominic Russo, purchasing and sales manager for Rocky Produce Inc., in Detroit, which delivers to independent, regional and national chain grocers in the Midwest, Mid-Atlantic, South, and Ontario. “The automotive and ancillary industries have all been good and strong, and have all done well for the past several years. In general, everybody’s working, everybody’s moving. Consumer confidence is there, people are spending money, and I think people care about buying better produce more than ever, so they are spending that way.”

INSIGHTS TO THE MARKET

A deep dive into the character and resilience of the market — from its response to the pandemic to what makes it unique, the roles of wholesalers and independent retailers and more — shows why it has largely shrugged off adversity, and why its prospects going forward are good.

Response to Pandemic: In the wake of COVID-19, Russo notes, there has been “more retail action and people are cooking more,” both of which lead to more produce consumption. Here, as everywhere else, the restaurant businesses were shut down earlier in the year, but “now they are back open, albeit at limited capacity. That sector of our business is not what it should be; it has come back, but not all the way.”

“In terms of food, the metro area might as well be two separate planets: the city itself, largely a giant food desert, and the adjoining suburbs with produce superstores, one nearly 180,000 square feet.”

The changes as a result of the pandemic have been significant, suggests Sam Morykwas, marketing manager for the nonprofit Eastern Market Partnership in Detroit, a nonprofit that manages the public market and operates programs to strengthen Metro Detroit’s food sector. “Masks are required, sanitization is more frequent, no sampling is allowed. We’ve increased drive-through and contactless food purchasing options, and more.”

Attendance is down thus far this year, Morykwas notes — from about 40,000 on an average Saturday during peak season to between 6,000 and 8,000, he adds — “but those who are coming are here to shop.” The typical tourism components of the market, such as restaurants, tours and events, have seen a “significant” decrease, but sales for many vendors have been “steady.”

Uniqueness: Mathews suggests that any substantive evaluation of the Detroit region “all depends on how you define the Detroit region. In terms of food, the metro area might as well be two separate planets: the city itself, largely a giant food desert, and the adjoining suburbs with produce superstores, one nearly 180,000 square feet.”

The region also boasts what Mathews refers to as “some fairly unusual” demographics. The city’s population is over 80% black, while the metro area has a white majority and features the largest Arabic-speaking community found anywhere outside the Middle East, itself a mixture of religions and ethnicities. “So depending on where you are, produce selection is either severely constrained or vibrant and diverse almost beyond comprehension.”

Dominic Riggio, president of Riggio Distribution Co. (RDC) in Detroit agrees, referring to the city as a “unique and multi-cultural marketplace. With a wide range of restaurant and culinary options and very diverse retailers as well, the Detroit market services many produce needs from staples to exotics.”

“We provide a great platform to showcase new and existing items to our diverse customer base.

One of the things that makes the region so singular when it comes to produce is that strong mix of ethnicities in the metropolitan Detroit area. According to Russo, “A lot of these people, especially the first and second generations, tend to eat a lot more fruit and cook a lot more, especially vegetables, so that’s a big thing. There are just a lot of different demographics here that play into the mix.”

There are also many independent fruit markets, he adds, that have become “leaders in what they do and how they merchandise product, get people to buy produce. They have been very competitive, and have taught consumers what to look for, what to buy. It has piqued interest among consumers and given them and experience when they go and shop. There are several stores in our area that do this, and it has created a demand for high quality.”

Independent Retailers: Independent retailers are, in Riggio’s view, a “cornerstone of the Detroit market.” His company has “many great relationships with all customer types, and the independent retail business is a very important part of that portfolio.”

Russo notes that the increase in independent retailers visiting the wholesale markets daily has been steady. “The independents that are here are strong and they’re steady, so they are another partner of ours. They count on us to have the product so they don’t have to buy for a week at a time; they can buy for a day or two at a time, so they shop every day. They use this whole terminal as a warehouse space. They’ll come in and pick the best lots, whatever works best for them and their clientele. That creates opportunity for them and, in turn, opportunity for us.”

As for the rise in independent retailers, Mathews notes that, “Again it depends on how you define the market. The chains left the city starting with the riots in 1967 and proceeding for the next few decades, so Detroit itself has been a default independent-only market for a generation or two.” Wholesalers play a “fairly large” role in the metro area, he adds, especially as the suppliers of independent stores.

Driven by consumer demand, so-called greengrocer superstores do well here too, which means there is a lot of opportunity to increase not only locations but volumes in existing locations. Some retailers, such as Meijer, stress the fact that they sell Michigan products.

Wholesalers: Detroit’s distributors play a “very important” role in the overall fresh produce business, says Riggio. Quality players offer a value to many types of customers, thanks to their industry knowledge and experience, warehouse and logistics capabilities, grower and supplier relationships, and other reasons. “Good wholesalers effectively serve as the buying team for their customers.”

To be a wholesale distributor, especially in the Detroit region, “you have to be quick and nimble, and I think you find that here in Detroit,” Russo says. “There are many wholesale customers of ours that are working hard to be a solution to their retail customers. In general, I think this is the American way. What you put into it you get out of it. There is opportunity; there is no one who says you can’t do something.” Service remains a key, he adds, every bit as much as the produce itself. “If you put in effort in both of those areas, you are going to be successful.”

Indeed, wholesaling produce in the Detroit market is always a challenge, says Russo, “but on the other hand there’s always an opportunity. If you miss an opportunity on one potential sale you just work hard and seek out an opportunity for a next one. It has to be an individual effort, it has to be a team effort, and if you just have that and don’t give up you will find a home for one commodity to the next.”

Strong relationships are, of course, important. The growers that are most pleased with Rocky’s performance are the ones that trust them enough to leave up to them the best way to take care of Detroit customers. “We listen to them, and when they need to move extra things, whatever they may be long on, they realize that we capitalize on the things that work better. It turns out to be a win-win for us and for the growers.”

Regional growers: The nearby Michigan growers are “in the driver’s seat,” Russo insists. “It’s their market: they grow and market their product, and when we respect that. Many Michigan farmers are able to distribute their own products, due to the close proximity, directly to a lot of our customers, and we think it’s great. We have been able to come alongside of some of the best Michigan growers around, buy their product on the secondary level, promote their product and sell it right alongside of them. We have found that there is opportunity in doing that, and we have been successful with it.”

Outside: Growers and shippers outside the region also find success selling into the Detroit region.

Riggio says he sees “great” potential at RDC for any grower/shipper from any region to find success. “We provide a great platform to showcase new and existing items to our diverse customer base. If a product has value in quality and cost, it will ultimately be successful here.”

Riggio has found that the Midwest growing region benefits from its wholesalers. “We are able to serve as a conduit for many of their products to a larger marketplace, with 12-month logistics and marketing built into our operation. Likewise, we benefit from these regional growers by offering ‘locally grown’ product and being able to lower cost based on the freight savings and freshness.”

Challenges: The major challenges facing anyone in the Detroit region’s produce industry are, according to Riggio, “weather — in both the growing and selling regions —logistics, both inbound and outbound, product availability, and inventory management, to name a few.” His own company “manages all of the challenges on a daily basis in order to best service our customers.”

Distribution across the length and breadth of the market, including the city itself, “is always a challenge,” Mathews points out. “For many city residents, the only way to access good produce variety is to go to the Eastern Market, the city’s meat and produce terminal, although Meijer and Whole Foods have opened units inside the city limits.”

Detroit’s produce market is not only surviving but thriving, and there doesn’t seem to be a reason for that to change any time soon.