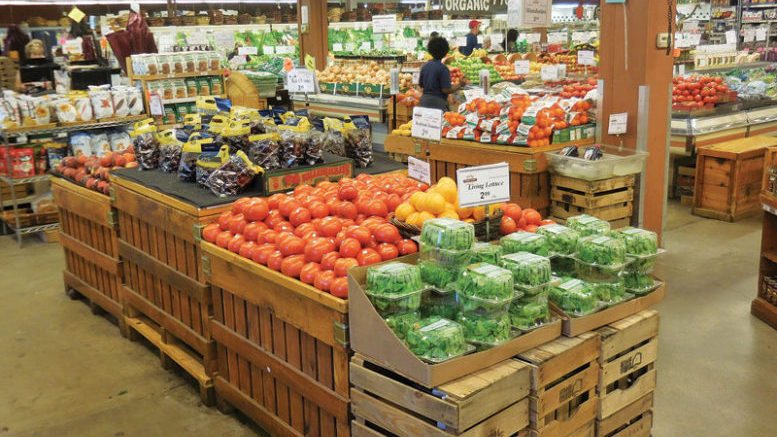 Visit Miles Farmers Market and it’s apparent that this is a house that produce built. For starters, there’s the store name, a designation that conjures images of summer-ripe fruit at the peak of freshness. Step inside, and the generously proportioned fresh foods section is a veritable feast for the senses, with bin upon bin of fruits and vegetables bursting with color, variety, and height-of-season vitality. Instead of being tucked away in some neglected corner of the building, the produce department commands a full two-thirds of the retail space, despite accounting for only 35 percent of the independent grocer’s sales. 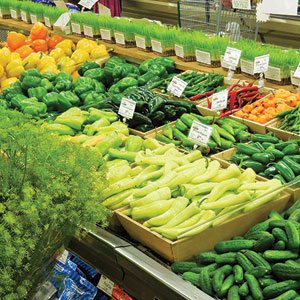 When Giant Eagle, Wal-Mart and Heinen’s, a popular independent local grocery chain, gobble up more than half the produce dollars in the region, smaller retailers need to find a way to stand out. For Miles Farmers Market, a gourmet grocery located in a suburb just outside of Cleveland, produce has always been the secret weapon.

“Produce is our bread and butter,” explains owner Frank Cangemi, who started Miles Farmers Market in 1971.

Back then, the market was precisely that: a seasonal, open-air market on the outskirts of town selling fresh fruits and vegetables. But in the 1970s, when more urban residents became suburban residents, Miles was more than happy to make new customers of them all.

The store has matured considerably since those early days, subsequently adding both physical square footage as well as new departments. Miles now boasts top-quality meat and seafood counters, and the bustling catering business has taken on a life of its own. Over the years, the complex has ballooned in size from 2,000 to 20,000 square feet, but throughout all the expansions, the produce department never has gotten short shrift.

“Our produce section is definitely bigger than any grocery store in the region,” says store manager Joe DeGaetano. “Produce is who we are and how we started.”

Like pretty much every other produce peddler in town old enough to remember “the good old days,” owner Cangemi used to begin every day at the Northern Ohio Food Terminal, where he competed with countless independent retailers for the day’s best deals. But times change, and these days those terminal market purchases are being supplemented by more deliveries, direct shipments and, in season, local auctions buys. While every effort is made to support both the wholesalers at the central terminal and area growers, that has never been the main objective.

“Our consumers here want the best, and they’re willing to pay for it,” says DeGaetano of his affluent suburban shoppers. “We don’t sacrifice quality for price. If you ask our customers why they shop here, they’ll tell you it’s the produce.”

You likely can add shopping experience to those motivations as well. Not unlike a bona fide farmers market in a bucolic setting, Miles displays its fruits and veggies in big wooden orchard 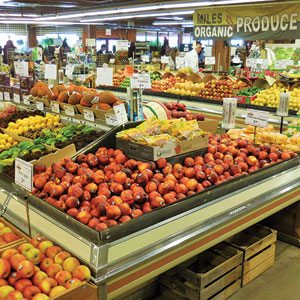 “Obviously, we’re going after that open-air, farmers-market look, because that’s how we started,” explains DeGaetano. “Throughout all the remodels we’ve done over the years, it was important to keep the integrity of that look and never change it.”

In summer, shoppers have the pick of the litter when it comes to stone fruits such as cherries, peaches, plums, nectarines and apricots, as well as every berry and melon under the sun. A rainbow of ripe tomatoes is joined by corn, broccoli, squashes, cauliflower, cabbage, apples and asparagus.

“Exotic” items such as tamarind pods, lychee berries, dragon fruit, star fruit and rambutan sit feet from conventional items like avocados, celery, cucumbers, bell peppers, chili peppers, citrus and pineapples. All of it, down to the last dewy grape, looks impeccable and unblemished.

As much as customers can bank on finding the best quality produce at Miles, they also can count on change, a constant since the early 1970s. Yet again, the East Side institution that has been nourishing the local community is growing right along with them.

“As we accumulate some money, it all goes right back in the business,” says Cangemi. This time it’s a major kitchen expansion, an improvement geared both to staff and shoppers. “We built it to handle only so much business, but because were doing more than we ever anticipated, it’s getting harder.”

Sounds like what you would call a good problem to have.