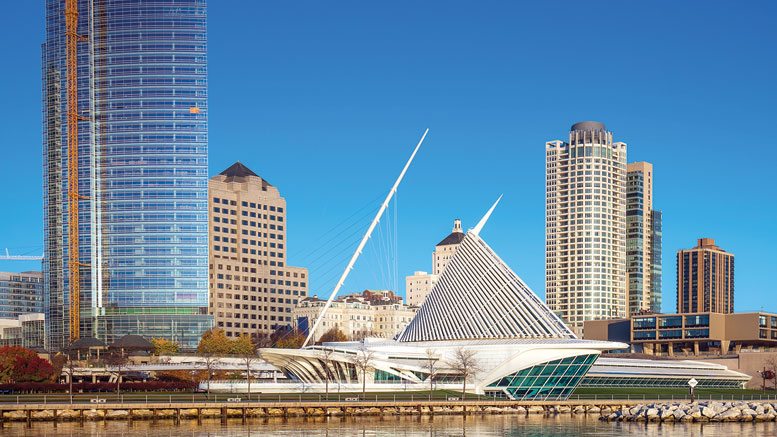 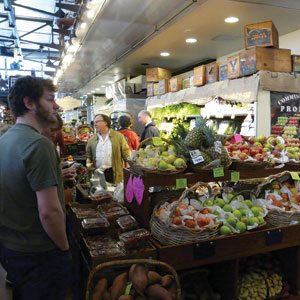 Jack Marchese recalls the time not long ago when the Milwaukee wholesale produce business was concentrated in the late 19th century three-story Commission Row building on Broadway, in the city’s historic Third Ward.

“When I was a kid, I would go in the truck with my father to Commission Row, when Milwaukee still had a Commission Row,” says Marchese, vice president of Marchese Inc., Milwaukee. “He would pick up 30 cases of hothouse tomatoes, 20 cases of peaches, 10 cases of lettuce and cases of bananas.”

Marchese, now 54, recalls going with his father in that truck, loaded with produce, to the small local grocers that served the nearby neighborhood.

“He had a route on the south side of Milwaukee, which was mostly small Polish stores,” he says. “He’d go in, ask the owner what he wanted, and go out to the truck, bring it in, get paid and be done.”

Produce wholesalers have long since left the Commission Row building, which has been rehabilitated and now houses restaurants and boutiques.

John and Anne Nehring, owners of numerous grocery outlets in the city, revived the Commission Row name four years ago when they opened a produce outlet on Water Street, a few blocks from the old wholesale market, to help alleviate the shortage of fresh fruit and vegetable vendors serving the neighborhood.

But the business of produce in Milwaukee has changed in ways familiar to people in the industry in most cities in the country — orders have gone high-tech, a larger Hispanic population has created demand for a different mix of fruits and vegetables, middle-class consumers have come to expect to see organic offerings, and concern about food safety is everywhere.

Milwaukee produce is different then it was when Marchese went store to store with his father peddling the produce in the back of that truck.

“Now we have two semis and 55 trucks,” says Marchese, thinking of the extraordinary growth he has seen in the family’s wholesale produce business. “We took orders over the phone for a long time. Now it’s gone to outside sales people with email or fax orders. The phone systems can take 30 calls at a time.”

Modern technology has brought the area even closer to the global produce supply chain.

“Everybody’s a lot smarter; the analytics are alive,” says Paul Schulz, director of sales and marketing at Maglio Co., Milwaukee. “Logistics and technology vastly improved the capacity out of Mexico; that product has become much better than it was. We built a facility in McAllen, TX, and have relationships there.”

Maglio’s is a fifth-generation wholesaler that started in Chicago in 1902, opened a Milwaukee facility in the 1940s, and has since expanded to Boston and, most recently, opened a 30,000 square-foot repack and fresh-cut facility in McAllen, TX.

“We still get most of our tomatoes out of Florida,” says Schulz. “Florida is still our first choice for U.S. grown tomatoes. We get them from Florida, then California and Mexico. We get tomatoes, peppers, squash and zucchini. from Mexico. Limes are a huge product out of Mexico.”

The end of the city’s terminal market made each wholesaler even more responsible for his or her own logistics in the global produce supply system.

“We still sell to the large stores. for the ones with distribution centers, we mainly do fill-ins when they come up short on something.”

“We’re the major player here in town; we manage our own logistics,” says Schulz. “We are a wholesaler. Chicago still has a terminal market and Milwaukee used to. We moved off Commission Row in 1998 and were followed by Jennaro and Marchese.”

Modernity has also meant that in Milwaukee, as elsewhere, the major supermarkets receive almost all of their fruits and vegetables at their own distribution centers, rather than wholesalers.

Wholesalers have developed a wide range of strategies in order to stay in business in a produce world dominated by large chains that have their own distribution centers.

Present-day view of the Third Ward.

Some of them have concentrated on a smaller number of large retailers in response to consolidation.

“There are fewer and fewer customers; the retail is more consolidated,” says Jerry Kowaleski, president of Kleen-Pak Foods Inc., Milwaukee. “There used to be Cole’s, Century, Fleming, SuperValu. There are fewer places now. Roundy’s and Piggly Wiggly are our two biggest customers. Our main item is onions; we also rebag some spinach, that’s our second item. We supply Roundy’s with onions. We do private labels on the bags. For Piggly Wiggly, we rebag onions, but we don’t do labels.”

In addition, Kleen-Pak Foods services intermediaries that deliver to individual stores and restaurants.

Some wholesalers are able to still serve a wide range of markets, including chains with distribution centers, by specializing in a small number of produce items.

“Our business has been increasing,” says Tom Gianciola, president of Pre-Pac Produce Distributors Inc., Milwaukee. “I pack red and Yukon gold potatoes. I sell to both restaurants and mainstream markets. It’s a regular deal with the markets; it’s not just filling the gaps. I get the potatoes from all over, as far away as California if that’s where they’re in season. It seems like the Yukon golds are becoming more popular. My number of customers is about the same, but all of my customers have been increasing the amount of produce they want. This has been happening the past two years or so; maybe the population of Milwaukee is increasing a little.”

Other wholesalers have adapted by shifting the focus of their business toward various foodservice outlets. 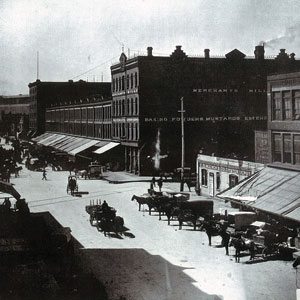 The historic Third Ward, in the Commission Row area on Broadway, was a hub for Milwaukee’s produce business.

“We do a little with large supermarkets, but we’re mostly foodservice,” says Marchese. “We do both bigger and smaller chain restaurants, and independents. We do schools and hospitals.”

Still, other wholesalers find there are still enough smaller chains in the area to sustain their trade.

“We’re in Kenosha, and we go into Wisconsin, Illinois, and a little into Minnesota and Indiana,” says Bill Dietz Jr., president of Heartland Produce Company, Kenosha, WI. “Milwaukee seems to be a good market. You have Sendik’s Food Market, Pick ‘n Save, Woodman’s Food Market and some independents. We sell to everybody.”

Heartland, however, expects change and stays in business by being prepared to replace lost customers with new ones.

“You do get consolidation among retailers ­— some close, and some open,” says Dietz. “We opened in 1989, and we have a few customers who have been with us since the beginning.”

In the 1960s, Octavio Villareal opened a small corner grocery that quickly became a gathering place for Milwaukee’s influx of immigrant workers from Mexico. Villareal’s sons were able in 1978 to expand that store to include many of the fruits and vegetables their immigrant customers missed from home.

“They wanted to offer products that would make them comfortable, that were what they’ve grown up with,” says Sonia Villareal, administrative assistant at El Rey Mexican Products, Milwaukee. “They get them from the wholesalers. Our customers are 100 percent Hispanic. Our Hispanic population is growing. My parents came here in 1978, and this store was opened at that time because many Hispanics were coming to Milwaukee.”

As immigrants continue arriving from virtually every corner of Latin America, produce sales at El Rey have steadily increased.

“Business is increasing little by little,” says Villareal. “A little bit of everything is coming to Milwaukee — Puerto Ricans, Dominicans, Mexicans, Argentineans and Cubans.”

Though not as fast as Los Angeles, New York or nearby Chicago, Milwaukee is experiencing an ethnic change, and, with it, a change in what consumers want in their mix of fruits and vegetables.

“There’s definitely more ethnic shoppers than there were,” says Heartland’s Dietz. “We get more calls for mangos, avocados and Roma tomatoes.”

Other wholesalers with their roots in an older Milwaukee have also noticed and adapted to the change.

This city of 600,000 on the shores of Lake Michigan continues to grow more diverse, as more than 100,000 Hispanics have joined the roughly equal number of African-American and Anglo residents.

“It’s not a huge population; it’s not like Chicago,” says Marchese. “But with the Hispanics, we have more mixed peppers.”

Wholesalers are noticing and responding to the trend of young and modestly upscale Milwaukee residents looking for organic produce.

“There’s more of an emphasis on organic,” says Dietz. “It’s been growing in the past 10 years or more. You have more large growers and shippers with organic. They’re producing better quality, and the economics of scale have made it more affordable. The feedback I get from retailers is if the price of organic is close to conventional, the consumers prefer to buy organic.”

The interest in organic fruits and vegetables is part of a broader interest in value-added, quality produce.

“Organic is something that continues to be desired by the young users,” asserts Maglio’s Schulz. “Value-added is in demand, too. People are looking for quality products.”

This trend is evidenced in greater demand for some of the more interesting leafy salad greens.

“Business is increasing little by little. A little bit of everything is coming to milwaukee — PUerto Ricans, Dominicans, Mexicans, Argentineans and Cubans.”

“We’ve been selling more leafy greens in the past 10 years or so,” says Marchese. “We’re seeing a lot more in the root vegetables, and different varieties of leafy greens. We have Mann Packing’s Burgundy Honey Gem lettuce in the spring; we’ve got Tanimura & Antle’s artisan lettuces. We see value-added produce becoming more and more important.”

Wholesalers are even taking the initiative to help improve shelf stability of value-added produce.

Milwaukee wholesalers are keenly aware modern shoppers have also come to expect the highest standards of food safety, and have prompted the development of regulations to ensure it.

“In the past 10 years the biggest change has been food safety and traceability of the produce,” says Marchese. “We like to stay on the cutting edge with third-party audits.”

Part of staying on the cutting edge at Marchese is having a full-time food safety specialist on staff.

“I was trained at the Charles Deibel Lab,” says Brian Waldron, HACCP manager at Marchese. “I am certified for HACCP. Not too many wholesalers have their own HACCP manager.”

There is a payoff to making such a large and tangible commitment to the highest possible food safety standards.

“We can show customers our audits from Primus, and they can see we do more than is required,” says Waldron. “I write our program and monitor it. We monitor the coolers, how we receive the produce and how we ship it. We are also monitored by Primus. It helps us with our customers.”

Some people in the business, however, wonder how much of the interest in organic produce is not really about the fruits and vegetables but, instead, about delivering the subliminal message that this store offers quality.

“We see a little more organic,” says Topic Banana’s Kirchen. “It doesn’t seem to sell all that well, but the retailers have to have it.”

But Kirchen has also noticed another, very different, trend that is a holdover from the recent lingering recession.