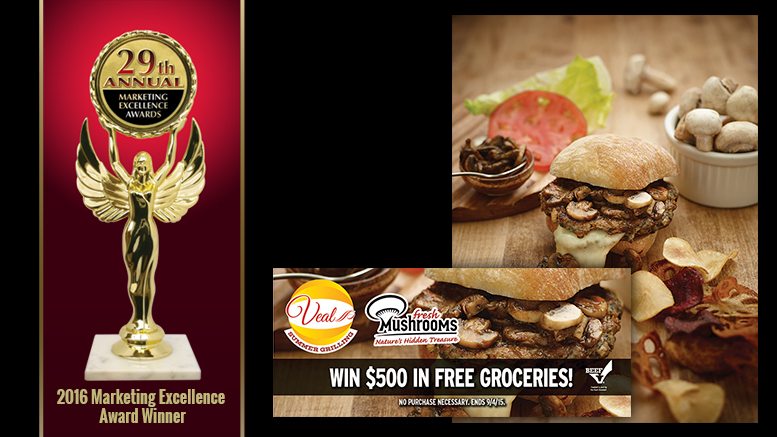 Objective: To promote a summer grilling option while increasing produce and veal consumption.

Campaign: The Mushroom Council partnered with the Cattlemen’s Beef Board Beef Checkoff program for a Summer Grilling Promotion featuring a Muenster Stuffed Veal and Blend Mushroom Burger. The burger blend combined veal and mushrooms and was topped with more mushrooms. During the promotion, consumers found the new burger recipe and details about the $500 grocery sweepstakes located on specially marked veal package labels. The promotion was supported with digital and social media to promote awareness. Contest entries were made online at VealMadeEasy.com.

Results: This was the first year the Mushroom Council introduced The Blend at retail. It was an ideal partnership to increase consumption of veal and awareness and trial of The Blend. The Beef Checkoff generated digital media impressions of 1,356,538. The promotion was so successful in 2015 both the Mushroom Council and the Beef Checkoff are rolling out this promotion in 2016 with a new featured item and additional promotional activity.

About 300,000 packages with on-pack labels were distributed to 19 retailers in more than 2,000 stores. More than 162,000 sweepstakes entries were generated. There was press coverage and broadcast impressions were generated from a TV commercial that ran in both the Philadelphia and Washington D.C. markets. A Facebook sweepstakes was launched. A social media component increased exposure with online video impressions. More than 3,500 e-blasts were sent to the Mushroom Lover’s List and 4,600 loyal Pinterest board followers.