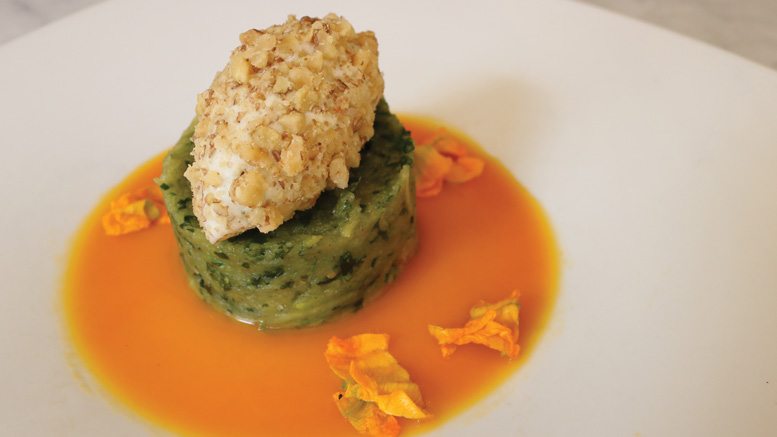 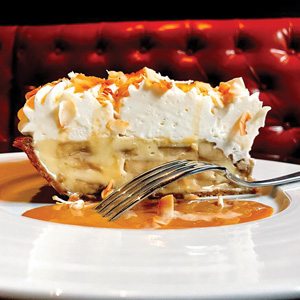 When it comes to dessert, we don’t just want to have our cake and eat it — we want to feel good about having a slice, too. We just want simple ingredients, low-glycemic sweeteners and “good” fats. Even better if it could also be gluten-, dairy-, soy- and preservative-free.

Oh, and it has to taste sweet, indulgent and familiar — but not the same old crème brûlée with raspberries.

These are challenging times for restaurants and pastry chefs as diners order dessert less frequently. Portions are getting smaller and dessert may even be moving from the final course of the evening to a different time of day. However, trend data indicates and pastry experts agree that new opportunities are opening as restaurants expand the role of fruits and vegetables in desserts.

The dessert course is still mostly about comfort and familiarity. According to Chicago-based Datassential, traditional forms like cake, ice cream and cheesecake are the most popular meal-enders on restaurant menus across all segments. American restaurants’ dessert menus are actually growing, now including an average of eight to 13 desserts, but the items aren’t necessarily traditional plated sweets.

There may be more dessert choices, but that doesn’t necessarily mean we are ordering more often, according to celebrity Chef David Burke. “Dessert sales are down 25 percent in the past few years. People aren’t eating sweets as much at night,” says Burke, a culinary partner in ESquared Hospitality in New York City and known for his appearances on Top Chef Masters and other television food programs. In September 2016, Burke opened BLT Prime by David Burke in Washington, D.C.’s Trump International Hotel.

“Restaurants have to find new ways of grabbing the attention of diners at dessert,” says Burke. The restaurateur and former pastry chef is known for his meal-ending innovations, including a Cheesecake Lollipop Tree served with flavored whipped cream and a Chocolate Waffle Cake for two delivered in a hot waffle iron.

Beyond these signature desserts, the October dessert menu at New York’s Tavern 62 by David Burke provides a snapshot into contemporary fine dining dessert trends featuring the use of fresh fruit. Among the selections are a Lemon Raspberry Tart with grilled peaches, macaroons, and meringue; a Warm Apple Tart with pomegranate, caramel sauce and ice cream; and a Warm Banana Toffee Pudding.

Burke says the year-round supply of high-quality fresh fruit has made the job of the pastry chef much easier, especially in the winter, than when he started in the business decades ago. “Now there are so many heirlooms available; but I still stick with what’s in season when I can, like heirloom apples with fresh thyme and lemon verbena. To me, that’s more interesting than apple pie,” says Burke.

“There is a definite trend toward smaller desserts. Most people don’t want to eat a sugar bomb anymore at the end of an evening; but eating out is still an indulgence, and they like a little something sweet at the end,” she says.

McBride says the main trend on dessert lists is a return to the classics, with pavlovas, baba au rhum and even baked Alaska making a comeback in a lighter form. “Pavlovas are great low-fat vehicles for fresh fruit and berries. I recently had a pavlova with pumpkin that was whipped with cream and had a pecan crumble on top. I don’t like pumpkin pie, but I liked that a lot.

“Now, the classic desserts are leaning on the healthy side and are made with less sugar. I’m using a lot of hazelnut flour and fruit in desserts, including a cake using pears poached in honey with spices and black peppercorns,” says McBride.

McBride notes that less familiar fruits have become popular through pastries. “For a long time desserts with Meyer lemon were very rare. I would always order it when it was available. Now almost every dessert menu has a Meyer lemon dessert.” She named plums and heirloom grapes as the next candidates for popularity.

“When you get great fruit at the peak of ripeness you don’t want to mess with it, just enhance it. One thing that really irks me is adding sugar to things that don’t need it. It’s almost a crime,” she says.

When the National Restaurant Association (NRA) surveyed 1,300 professional chefs and members of the American Culinary Federation in 2016, 66 percent said heirloom fruits and vegetables would be one of the Top 20 food trends for 2017 and would impact sales. Other NRA chefs’ trends point toward more house-made ice cream and savory desserts starting to enter the end-of-meal conversation.

Savory sweets are definitely on the menu, according to Datassential. In the past four years, dessert menu appearances have jumped for olive oil (up 154 percent), bacon (137 percent), herbs (49 percent), bourbon (46 percent) and “spicy” (38 percent).

More Than a Bowl of Cherries 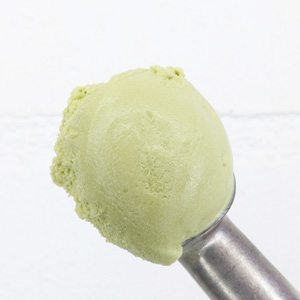 “We are seeing demand for healthier desserts, and any dessert could be made more healthful by adding more fruit. You could make fresh berries the star, but very few restaurants are willing to do that,” says Amy Myrdal Miller, nutritionist, and owner of Carmichael, CA-based Farmer’s Daughter Consulting.

“You have to look at consumers’ expectation for dessert at restaurants. A bowl of fresh berries — no matter how great it is, isn’t good enough. It’s humdrum. I can do that at home,” says Miller.

“People still want to indulge when they go out,” she says. “In the end, ‘right’ portioning may end up being more important than cutting ingredients like butter and sugar.”

According to the National Restaurant Association, 41 percent of restaurants are menuing mini desserts, which meet the demand for “a little something sweet” along with tasters, flights and sharing portions.

“I’ve seen candied roasted carrots as a dessert, but it’s far out there for most people. I thought ‘Is this what I would want for dessert?’” says Miller.

Mom was always encouraging us to eat our veggies, but she probably wasn’t thinking about dessert. Hiding vegetables is a time-honored tradition among bakers with such notables as carrot cake, zucchini bread and German chocolate cake with sauerkraut subbing for coconut. Pumpkin and sweet potato get a vegetable pass once a year when they star in sweet holiday pies.

“The hot term these days is ‘decadent health’ when it comes to desserts. There’s a lot of attention to reducing sugar, generally in new spins on old,” says Pickarski. “The trend should be a boon to the fresh produce industry. It’s a trickle-down thing. It starts in fine dining, then to hotels and foodservice to the home cook.”

Pickarski, the Colorado-based author of The Classical Vegetarian Cookbook for Professional Chefs and Inspired Cooks (eco-cuisine.com), operates a natural foods company producing bakery mixes for everything from scones to brownies that help restaurants more easily serve vegetarian and vegan desserts. In December 2016, Pickarski gave a presentation at the Food and Agriculture Organization of the United Nations about his plan for pushing pulses (beans, peas, and lentils) to the center of the plate in every course, including dessert.

Pickarski has made desserts with vegetables “on the sweet side” like fennel and carrots, poaching them in simple syrup with agave syrup. He has crafted a classical Napoleon using caramelized winter squash, and a carrot pudding made with fresh carrot juice. However, he is realistic about the possibility of vegetable desserts catching on. “Vegetable desserts still occupy a spot far out of the mainstream,” says Pickarski. “I’m a vegan and it’s nice to see restaurants starting to respond with vegan, vegetarian and gluten-free desserts. Producing them is a major challenge for kitchens without a pastry chef.”

Chef David Burke is known for his rule-breaking approach to ingredients, and that holds for dessert. “We serve caramel bell peppers. We confit bell pepper in sugar, apple cider, and butter, and serve it over ice cream. You get the sweet first and then the bell pepper note, so there is the element of surprise hidden in caramel.” Burke also candies black olives in syrup with rosemary, which is grated as a garnish similar to a salted candied peanut.

It is impossible to ignore the 500-pound Jack-O’-Lantern in the dining room. Pumpkin spice is still the alpha vegetable flavor in winter desserts, from pumpkin pannacotta to pumpkin whoopie pies.

“It’s no joke that pumpkin is the first thing that comes to mind in desserts using fresh produce. You name the food product and it is in pumpkin spice development,” said Farmer’s Daughter’s Miller.

However, the punch line is that little pumpkin is usually involved in these popular foods, just spice, and sugar.

Other up-and-coming dessert flavors can be found on Datassential’s 2017 Trends to Watch Forecast. Cajeta is on the rise. That’s a goat’s milk caramel similar to dulce de leche, which is popular in Central and South American desserts and served with fresh fruit. Australian finger limes, or “citrus caviar,” are widely used in restaurant desserts and, according to Datassential, more than 30 percent of consumers are interested in trying finger limes.

Mangos continue to grow in popularity. The Orlando, FL-based National Mango Board reports that consumption of mangos jumped 53 percent between 2005 and 2013, reaching nearly 3 pounds per person annually. Fresh consumption and smoothies account for the majority, but desserts inspired by Latin American and Asian treats are becoming a bigger part of the mix. About four in 10 consumers say they are interested in global and ethnic flavors, including indulgences such as baklava, churros and mochi ice cream, according to Datassential.

Some trend watchers suggest the biggest change in dessert trends is the time of day they are enjoyed. Chef David Burke says that dessert hasn’t disappeared; it has just been transplanted to the a.m. “A lot of the sweets are moving to the morning. You see pastry chefs opening all those muffin and doughnut shops,” he says.

Looking ahead to 2018 and beyond, menus will begin displaying more detailed information about calories, fat grams and sugar, says Miller. The transparency will nudge restaurants toward good-for-you dessert options, including fresh produce.

The final course will evolve rapidly because the next generation does not consist of meat-and-potatoes-and-pie diners. “It’s different for Millennials,” says Miller. “They have grown up with a more diverse diet. They are much more willing to try new things like vegetables in desserts. They like to brag about it on social media and post images of what they are eating.”

Chef Pickarski says that menus will change because Millennials are veggie-friendly. “The younger generation is looking at their health and sustainability of the planet. They are the ones who will drive this trend. The general market is much more conservative when it comes to new food ideas.”