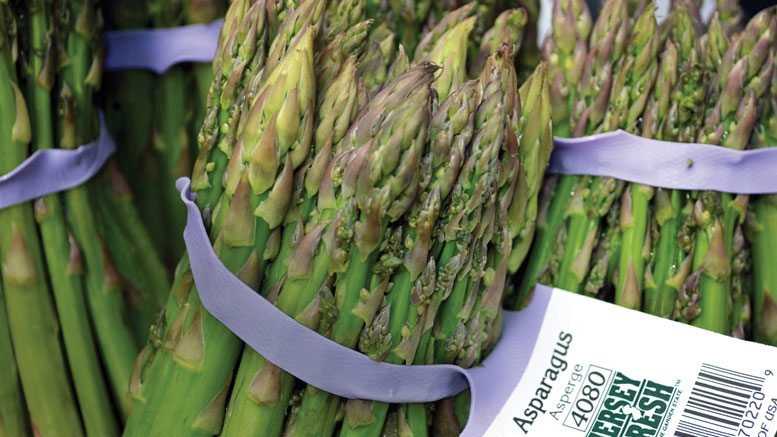 “The Garden State” harvests more than 100 different types of fruits and vegetables. 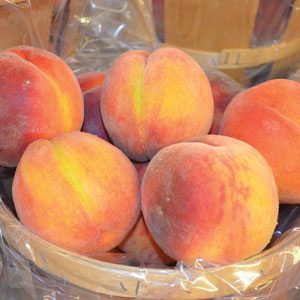 In 1876, Abraham Browning compared New Jersey to “an immense barrel, filled with good things to eat and open at both ends, with Pennsylvania grabbing from one end and New Yorkers from the other.” He called New Jersey “The Garden State,” and the nickname stuck.

Although New Jersey is the most densely populated state in the United States, food and agriculture are the state’s third-largest industry. As of 2017, New Jersey had 9,000 farms covering 720,000 acres. Farmers in the Garden State produce more than 100 different kinds of fruits and vegetables. Sales generated in 2015 totaled $1.04 billion, according to the New Jersey Department of Agriculture (NJDA).

“New Jersey’s diversity of produce and outstanding production surprise many people,” says Tom Beaver, director of the NJDA’s marketing and development division. “New Jersey has a long history of being the home of some of the finest produce in the country.”

New Jersey is a Top 10 producer of a number of fruits and vegetables. According to the New Jersey Department of Agriculture 2016 statistics, the state ranked third in cranberries and spinach, fifth in bell peppers, sixth in peaches and cucumbers, seventh in tomatoes and eighth in blueberries.

A number of factors help make New Jersey one of the top produce states in the nation. The ideal soil, temperate climate and a growing season that typically stretches from March through December or January, contribute to the state’s outstanding production and diversity of produce.

Geographically, the Garden State is in a sweet spot — approximately one-tenth of the United States’ population lives within a 100-mile radius of central New Jersey.

Its location, combined with a quality infrastructure network of interstate highways and a turnpike, allow growers to ship to East Coast stores overnight. Growers also can easily reach the South and Midwest markets.

“Our proximity to major markets plays a significant role in the freshness and quality of our produce,” says Beaver. “Many times, New Jersey produce can be picked in the morning and be in the grocery stores the same day.”

New Jersey, however, boasts more than geographic and weather advantages. “Our growers are productive and efficient,” says Beaver. “We have many farms operating by the same families for generations. They combine knowledge and technology to maximize their efforts.”

Generational pride and heritage provide some of the intangibles running through many New Jersey farms.

“We are proud of what we grow,” says John Formisano of Formisano Farms, located in Buena, NJ. Formisano is a fourth-generation grower; his grandfather started the business in 1908.

“When produce is packed under your family name, you take a lot of pride in it,” says Bill Nardelli Jr., a fifth-generation grower at Nardelli Lake View Farms in Cedarville, NJ. “You make sure you do the best job possible.”

While New Jersey is home to a variety of produce, blueberries are among the most recognized. The state ranks fifth in blueberry production, behind Oregon, Washington, Michigan and Georgia. The season typically runs from early June through mid-August. The three major varieties grown in the state are Duke, Bluecrop and Elliott.

According to NJDA, in 2016, New Jersey produced 48 million pounds of blueberries, which were first bred commercially about 100 years ago in Whitesbog, NJ. Last year, the crop generated nearly $66 million in production value, according to NJDA.

Peaches are another well-known New Jersey crop, ranking fourth in production behind California, South Carolina and Georgia. Peaches have been growing in the state since the early 1600s. The season runs from late June through September. Today, there are approximately 80 peach orchards with a total of 4,600 acres. Although there are more than 100 varieties of peaches, yellow-flesh peaches comprise 64 percent of New Jersey’s peaches.

Because New Jersey is so close to major markets, peaches can be picked well-mature when their color, flavor and sugar are high. Sugar is one of the most important components when it comes to flavor. New Jersey peaches are picked when they are ripe and 10 to 18 percent sugar. Because a peach will not increase its sugar after it is harvested, growers use the process of cooling with water, or hydro cooling, to help retain the sugar.

“A combination of factors allows us to deliver peaches to the market with the highest level of quality and freshness,” says Beaver. “We believe you get the best eating experience with New Jersey peaches.”

Another high-ranking fruit grown in the state is cranberry, harvested in September and October; the state ranks third in production behind Wisconsin and Massachusetts. In 2016, New Jersey produced 56 million pounds of cranberries with a production value of $21 million, according to NJDA.

In 2012, the Philip E. Marucci Center for Blueberry and Cranberry Research in Chatsworth, NJ, a substation of the New Jersey Agricultural Experiment Station of Rutgers University, released the Scarlet Knight cranberry. It is one of six varieties introduced by the Center since 2005. The Scarlet Knight cranberry is intended for the fresh fruit market and table displays. It’s larger with a more uniform shape and has a longer shelf life than the traditional cranberry.

As demographics changed, so have New Jersey growers. The influx of Asians, Hispanics and Africans along the Eastern Seaboard has created unprecedented demand for ethnic produce. “We are trying to meet the demands of the consumers,” says Nardelli’s Nardelli.

Surveys conducted by Rutgers University and 15 other East Coast universities reveal Asian and Hispanic residents tend to spend more money each month on fresh fruits and vegetables than the national average. Food quality and freshness, followed by store selection and availability, were the most important aspects for these buyers — far more than price, language of vendors or packaging.

Rich Marolda of Marolda Farms in Vineland, NJ, says a decade ago, he sold seven or eight times as many collard greens as kale. Today, it’s about 50/50. “Once Dr. Oz started to promote kale as a superfood, the demand went through the roof,” says Marolda. “We have been trying to keep up.”

Nardelli agrees and says not only has he increased his production of kale, but he has started to grow different varieties.

Another response to consumer demand includes the increase of organic acreage. NJDA’s Beaver says organic produce has experienced incredible growth in the past five years — from 2011 to 2015, the number of certified organic farms increased from 44 to 75. Today, Beaver says there are more than 100. During the same time, there was a 43 percent increase in organic acreage and a 77 percent increase in market value, which jumped from $6.4 million to $11.3 million.

In 2008, Mardolo started with five acres devoted to organic. Today, he grows organic produce on 60 acres.

“Rutgers works closely with New Jersey growers,” says Beaver. “A strong relationship has been built over the decades. NJAES is always innovating and always trying to keep New Jersey growers stay ahead of the curve.”

Wetherbee says NJAES is a big help for the state’s blueberry growers. “They track the progress of berries from the beginning of the year. They estimate the time of bloom and harvest; and, they are very accurate. That’s important to us, because if we miss the mark, it can have an adverse financial effect.”

“Our growers continue to get stronger — a bright sign for future generations,” says Beaver. “New Jersey has an excellent reputation for fresh, high-quality produce. It’s in high demand and consumers count on us.”

“The Jersey Fresh program has been very successful,” says Wetherbee. “It’s a great program — one that is often imitated.”

The program includes professionally developed billboards, radio and television advertising, as well as special promotional activities held throughout the state during growing season. Specific point-of-purchase materials, such as price cards, stickers, banners and recipe cards, are provided free of cost to retailers and direct marketers.

Growers who want to use the Jersey Fresh logo in marketing need to submit an application and a $30 fee to the New Jersey Department of Agriculture. Inspection and certification at packing houses and processing facilities help guarantee the products being shipped and processed meet all grade standards.

Beaver says the program benefits growers, retailers and consumers. “Consumers can be assured they are receiving products that were grown nearby whenever stores are using Jersey Fresh point-of-sales materials,” he says. “It gives growers an advantage because many consumers are looking for the Jersey Fresh brand.”

Tom Sheppard, president of Eastern Fresh Growers, in Cedarville, NJ, says, “We have Jersey Fresh logo stickers on our shipping boxes. It’s definitely a selling point for many customers. If you buy our asparagus, you know where it comes from.”

In 2009, the Food Marketing Institute, Arlington, VA, conducted a national study asking Americans why they buy local. The top three reasons: freshness (83 percent); supporting the local economy (75 percent); and knowing where the product came from (58 percent).

“Locally grown is a popular movement all across the country. It has had a huge impact on growers. Consumers like to buy from the area where they live. They are interested in where their food comes from,” says Wetherbee.

Marolda Farms’ Marolda echoes Wetherbee’s observations. “The locally grown movement has been an injection for the New Jersey produce industry,” he says. “It helped New Jersey get to the head of the line again. It gives us a competitive advantage.”

Marolda points out that in the past, New Jersey often found it difficult to compete with California, which generates an extraordinary volume of produce and has a year-round growing season.

According to Doherty, consumers are more likely to support their local farmer and have a sense of loyalty if they know who they are and where the food was produced. “It makes consumers feel good about their purchase, and making the customer happy is the ultimate goal of the food retailer,” she says.

“The Jersey Fresh program and the ‘locally grown’ movement are a powerful combination,” says Formisano Farms’ Formisano. “ShopRite puts the name of our farm in its ads, promoting the locally grown aspect. Consumers know where their produce is coming from, and they can be assured of its freshness and quality.”

In 1984, the United States was still feeling the effects of the recession of the early 1980s, as the unemployment rate hovered around 7 percent. That year, the New Jersey Department of Agriculture (NJDA) funded and initiated the Jersey Fresh program to benefit local produce growers. The program provides consumer education and promotional campaigns that focus public attention on the wide variety of fruits and vegetables produced in the state.

The program was well received, and, over the years, has grown into a highly successful and recognized program. Eighty-five percent of consumers in the New Jersey-New York-Philadelphia region recognize the Jersey Fresh program, according to a recent study conducted by the state.

Jersey Fresh is the oldest state-specific brand program. It has become a benchmark for other states to initiate their own state-sponsored agricultural marketing program. “We like to brag about the quality and the freshness of our produce,” says Tom Beaver, director of NJDA’s marketing and development division. “The Jersey Fresh brand has strong consumer recognition and is highly respected.”