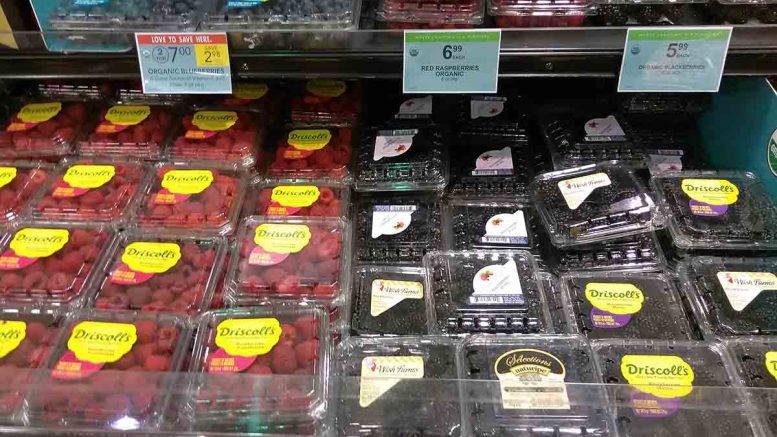 It is fast becoming the norm for berry growers to dedicate at least a portion of their farms to organic, but the practice is “not for the faint of heart” according to Gary Wishnatzki, owner of Plant City, FL-based Wish Farms.

It is a category often involving risk, higher costs and diminished yields. Climatic challenges make these issues even more pronounced in Florida, which has adopted organic cultivation at a slower pace than other growing regions.

For organic strawberries, the portion is 5% in the Sunshine State compared with 10% in California, while in blueberries the percentage is just 2.5% compared with the national sales level (including imports) of 8.5%.

“Our climate is harder to produce organic berries and be profitable at it, but our shippers want to make them available to their customers,” notes Sue Harrell, marketing director at the Florida Strawberry Growers Association.

“Organic growers do incur more costs than conventional growers and cannot count on the same yields per acre, so it is important to receive a premium for the product to be economically feasible for the grower,” says Brittany Lee, president of the Florida Blueberry Growers Association.

“In Michigan, there’s very little organic production, and it’s because of our very humid climate, which is not very conducive to growing organically,” he says. “Georgia is also a very challenging area because of how humid it is.”

Wishnatzki says the yield of organic strawberries “just swings a lot harder than the conventional crop does when it cycles up or down,” but Florida’s timing during a short December-January window makes the windfall worth it.

“There are many years when we’re making more money on conventional fruit at lower market prices just because the production is so much better,” he says. “But on Florida organics, it’s a much bigger premium than you have during other times of the year when California is in production,” he says.

He adds organic blueberries from Florida also attract a healthy premium over conventional fruit in March and April, but the difference is far greater in strawberries.

The situation is totally different on the other side of the country. Cindy Jewell, marketing director at California Giant Berry in Watsonville, CA, says strawberries in general have undergone competitive pressures from other berries, and the effects have been felt on the organic side, too.

“There are so many of them during the summertime that the price really declines because there can be overproduction,” she says. “So you’re not able to maintain that organic margin and that’s when they suffer.”

But the incentives are still there. Chris Christian, vice president of the California Strawberry Commission, notes the state’s total fresh strawberry production grew by 9% in 2018, while for organics the rate was at 30%.

“Many organic farmers also have conventional fields, and that way they’re mitigating their risk on the organic side,” she says. “And then we’re continually researching, and farmers are adopting new production practices to manage diseases in the field without the use of chemical fumigants.”

Christian also observes a general premium for organic strawberries, but the gap with conventional has been narrowing. Another cost pressure on organic growers is the conversion time needed for fields to transition to organic from conventional, so that certifiers can rest assured chemical residues are not in the soil.

“If you’re renting on ground, you can’t make the commitment to convert it over a three-year time period because you can’t guarantee you’re the only guy on there for three years,” says Jewell. “Unless you own the ground, you can’t really make that commitment, so it isn’t an easy trigger to pull.”

Jewell clarifies one way around this issue is the trend toward putting berries in pots, through what is known as substrate production. This is particularly common in blueberries, and it’s a trend also noted by Janice Honigberg, owner of Sun Belle Inc., in Chicago.

“In our experience, the production we’re working with really was not transitional,” says Honigberg. “Previously, there was much more of that going on but now a lot of it is new plantations. With the substrate growing that [transition] becomes kind of irrelevant.”

Not all growers want to take on substrate though, and according to Ryan Lockman of North Bay Produce, there is a good amount of conversion for organic blueberries in the Pacific Northwest and California, as well.

Jerald Downs, president of Berry People in Hollister, CA, says there has been a veritable “boom” in organics in the Pacific Northwest, particularly with growing conditions in Eastern Washington allowing for large-scale developments to fill market gaps.

In response, Smith plans to convert some of his farm with the early Duke variety to organic in the near future.

Growth rates are strong for organic berries grown in the United States, with most industry players seeing demand moving beyond coastal urban centers to the nation’s heartland.

But for this trend to be consolidated, the industry needs a 52-week supply. It’s a goal that is already difficult to achieve in conventional let alone organic, but the industry is getting there thanks to import programs.

She points to very large growth in Peru and Mexico, while growth has been steady from the regions that are allowed to export organic blueberries from Chile.

“It really is year-round supply because the Peruvian production is starting in August and the Mexican production continues through May and even into June, and of course we’re working with domestic production starting in March and April,” she says.

Honigberg’s views are echoed by Ryan Lockman of North Bay Produce, who says there has been more conversion to organic blueberries in Chile than anywhere else in the blueberry industry.

The South American country is the world’s leading exporter of the fruit, and Lockman’s observations appear to be corroborated by Andrés Armstrong, manager of the Chilean Blueberry Committee.

He says 14% of Chile’s blueberry exports were organic last season, but there are nuances that mean the proportion is likely higher.

“We know that there are blueberries produced organically, but they end up being traded as fresh conventional,” he says. “In all, we estimate that more than 20% of the surface area planted in Chile is certified or in the process of organic transition.”

One hamstring for Chile in recent years has been the presence of the European Grapevine Moth, also known as Lobesia Botrana, in some regions of the country. For Chile to be able to export blueberries at all from these areas, a fumigation protocol was adopted that effectively negates organic shipments.

At the time of writing, hopes were high this protocol would change by the next season, which starts in late 2019.

“Currently, the regions of O’Higgins, Maule, Bio Bio and Ñuble require fumigation to enter the United States,” says Armstrong. “The rest of the country doesn’t have this restriction and can export products in organic condition to this market, and that’s where the greatest growth is observed.”

However, he claims a systems approach has been reached by authorities to allow fruit without fumigation from Bio Bio and Ñuble, which account for around 30% of Chile’s production.

Chile would have played a big part in the results of a Nielsen study commissioned by the U.S. Highbush Blueberry Council last year, which found a 48% increase in volume sold for fresh organic blueberries at retail to reach 31 million pounds.

From a category perspective, Downs of Berry People says Mexico is “far and away becoming the predominant supplier of organic berries into the U.S. market.”

“Michoacan’s higher elevation and almost ‘eternal spring-like’ conditions, Jalisco’s abundant fertile land and excellent weather, and Baja California’s ‘greenhouse-like’ conditions, especially in the production of organics, makes for the undeniable importance of Mexico as an organic berry supplier to the United States,” he says. Downs notes the same phytosanitary protocols that have adversely affected parts of Chile have created an opportunity for other organic blueberry suppliers from December to mid-February.

A Small But Buoyant Category

Honigberg of Sun Belle points out production of organic blackberries is still well below that of blueberries or strawberries, but the growth rate is strong from the smaller base.

“We do have an increasing organic blackberry program — from last year to this year, we have a 75% increase,” she says. “We’re doing quite a lot with organic blackberries from Mexico, from Michoacán and a little bit in Jalisco, and we’re not doing much with domestic production.”

She says the organic raspberry category is smaller still, but not for lack of demand from retailers. The category has grown 11% this season for Sun Belle, sourced from Baja California, Central Mexico and a pilot program in California. “I think [retailers] are looking for them. It’s a varietal issue — you need to have very strong varieties, especially in Central Mexico, where you have to withstand subtropical conditions,” she says. “We’re in the midst of developing very strong raspberries.”

Downs describes an “ebb and flow” of prices during the growth phase of organic programs.

Interestingly, Downs has observed better shelf life on organic raspberries than for conventional, with more color, flavor and cellular integrity. “We have higher-end regional markets whose customer base no longer buys conventional blackberries and raspberries if the organics are available,” he says.

How to merchandise organic berries

Although most industry players diplomatically say the jury is out on whether retailers should place organic berries next to conventional or just have an organic destination, the majority lean toward the former.

“It’s very clear from our customers in the past that have converted from keeping organics in a segregated section of the store versus marketing them side by side, that organic sales have soared by marketing them next to the conventional,” says Gary Wishnatzki, owner Wish Farms, Plant City, FL.

“We do find retailers with separate sections won’t be promoting the organics as much as if they were side by side,” notes Janice Honigberg, owner of Chicago-based Sun Belle, Inc., whose company has a special Green Belle label to differentiate its organic offering.

Most agree having organic berries in a special organic section is still worthwhile though for catering to the “die-hard” fans. In strawberries, the leaders of industry groups are in favor of keeping the categories apart.

“The best practice in terms of merchandising is to create an organic berry destination category,” says Chris Christian, vice president of the California Strawberry Commission. “Usually the primarily organic shopper is going to that section of the department, and it’s most efficient to merchandise organic berries separately from conventional berries.”

“It may be confusing to consumers if they’re not checking the labels when conventional is put next to the organic,” says Sue Harrell, marketing director at the Florida Strawberry Growers Association. “Marketing them separately in different areas on display is best.”

“The Pacific Northwest, which is your mecca of environmental forward-thinking, they love it,” he says. “We were getting a good 40% more for our strawberries in the Ready Cycle than we were getting in the L.A. area, and the growers reaped the benefits.”

Martin highlights an alignment in values between shoppers who want organic and those who are willing to pay a little bit more to avoid plastic waste.

“Some of the plastic we’re creating is going to be around in the environment for thousands of years, whereas other types of packaging will either be recycled, or composted and broken down,” he says. “The organic people seem to be more in touch with that as they want food that’s not being sprayed with chemicals and other types of additives. They’re thinking in an environmental sense, and they’re trying to support that with their food purchases.”

Martin emphasizes it is a change that could take time. His company still supplies berries to customers who prefer plastic packaging, but he encourages more retailers to trial a switch.

“Once you put it [recyclable packaging] in there the social media buzz just takes right off.”