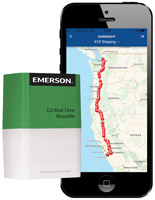 From farm fields to retail bins, reducing shrink and maximizing freshness along the cold chain are constant challenges. Fortunately, there are tools that provide real time information to improve transportation logistics at every mile. The increased use and affordability of GPS tracking and temperature recording devices give stakeholders control and help them meet market demands.

There are several types of devices that are either removable or built into trailers to help track location and temperature of loads. A transferable device, such as a temperature recorder, is removable, accessible and low-cost, but it does not provide real-time data. A GPS device may track location but not temperature. Integrated devices are not as common and cost more but offer delivery of real-time temperature and location information to the cloud where it can be monitored. Depending on the needs of the customer, these devices, or a combination thereof, will be the future of transportation logistics.

Temperature monitors and GPS tracking are not new, but their use is not as widespread as one might think. “I would not call it the standard,” says Roger Niebolt, sales manager, Cargo Data Corporation, based in Ventura, CA. “It’s certainly an option that’s had increasing interest in the past couple years, but there’s still a fairly noticeable price gap between the cost of a traditional or what I would call a conventional data logging temperature recorder as opposed to a real-time device.” Although price is a factor, some produce products simply require less monitoring than others, so temperature control becomes less critical. “Berries are a prime example of that,” says Niebolt, “but if you’re looking at something like squash, there’s much less interest in that level of monitoring.”

Amy Childress, vice president marketing and planning, Cargo Solutions, Emerson Commercial & Residential Solutions, Boise, ID, sees the use of real-time tracking vary by product, as well. “Many suppliers with highly sensitive cargo, like berries, have embraced real-time monitoring in their supply chains,” she says. “They are willing to invest and implement more robust tracking systems. Other companies with perishable products that are not as sensitive continue to implement temperature, monitoring programs with logger technologies.”

“What we’re seeing a growing interest and use of is the active devices that give you a live location and temperature — and in most cases, they have a light sensor, so they’ll tell you if the doors are opening.”

Ken Lund, vice president, Allen Lund Company, La Cañada, CA, sees this difference in need as well. He’s also seen wider use of inexpensive temperature recorders that aren’t as helpful with highly perishable commodities, such as asparagus or strawberries. “The problem with those is that they’re passive,” says Lund. “You get the information on the other side.”

Although this information may help determine what went wrong and who is at fault, they don’t help prevent problems. “What we’re seeing a growing interest and use of is the active devices that give you a live location and temperature — and in most cases, they have a light sensor, so they’ll tell you if the doors are opening.” These more sophisticated devices may cost more, but Lund sees this as insurance against claims that can run thousands of dollars, which is why their use is increasing. “They’re finally seeing that they can prevent a $35,000 claim,” says Lund of the companies who use this technology. “To me, for 40 bucks I think it’s the best insurance, and the industry needs to look at it that way.”

Paul Kazan, president of Target Integrated Logistics, based in the Bronx, NY, says temperature records have been “hugely benefecial to us and all parties in the supply chain, which is why we put them in every load possible.

“They are more expensive, but over the long run, it pays massive dividends in claims prevention. For example, we piloted a program for one of our customers putting them on all of their loads, and we have seen temperature-related claims drop to 0.1 percent of loads, which is astounding,” he says.

“Tracking and tracing is really about how companies are getting information in to react and respond,” says Robert Goldstein, president, Genpro, Inc., Rutherford, NJ. “On the asset side, if you’re a trucking company or a rail provider, they’ve been providing this information for a long time through GPS and satellite tracking. If you’re a middleman, a service provider, such as a broker, you don’t own the asset so you have to get information in and have integration and be efficient with being able to do that and manage that process and relay information.”

“When you tie into a guy’s cell phone, that’s a driver who supposedly is carrying your load. But what happens when he switches loads? You have a load going from California to Chicago and you’re getting reports from a driver in Ohio.”

It is becoming more common for customers to be proactive with what they do with that information so they can make better decisions and monitor risk.

Des Moines Truck Brokers, headquartered in Norwalk, IA, relies on temperature-control devices. “We use them as much as possible,” says Ben Batten, the company’s vice president of operations. “We’re seeing companies that are requiring their vendors to put those on a load, and there are fines involved if they don’t use them.” 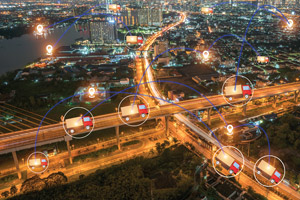 Batten hasn’t seen wider use of third-party software that links the temperature to the carrier’s interface yet, however. “I think the big thing for us isn’t so much the temperature monitoring as it is the tracking of the load,” says Batten. “We’re using MacroPoint and Trucker Tools to monitor that. We send a text or an email out to the driver, and it tracks him by his cell phone. It gives buyers a lot more good information to go on.”

This gives retailers options. When they hear that a driver, who is supposed to deliver a load the next day but is still thousands of miles out, they can adjust for it.

Fred Plotsky, president, Cool Runnings, Kenosha, WI, agrees that active devices are the better way to track loads, but disagrees in the value of any technology that only tracks the driver via software downloaded to their phones. “When you tie into a guy’s cell phone, says Plotsky, “that’s a driver who supposedly is carrying your load. But what happens when he switches loads? You have a load going from California to Chicago and you’re getting reports from a driver in Ohio.”

Plotsky thinks devices that are attached to the actual product and that deliver real-time location and temperature will someday become the standard. These devices provide flexibility and the ability to troubleshoot problems. “We’ve seen that during cherry season,” says Plotsky. “We had a shipper call us and say, did you know you got a guy in Montana and he’s got 50 degrees reading on the temperature device? We call him and he was in the repair shop because his reefer unit threw a belt.”

Kazan at Target Integrated Logistics says his company has averted problems too because of good technology.

“We once had a load that was sending us alerts for high temperatures. The driver confirmed that his unit was set continuously at the proper temperatures but decided to go to the shop to have his equipment checked. It turns out he was low on coolant and didn’t know. The temp recorder was perfect the rest of the trip, and the product arrived in good condition.”

Lund sees smart reefer downloads as an emerging technology that gives brokers, and those monitoring shipments an edge, as well. “The trucks themselves have a lot of temperature information,” says Lund. “But again, it’s passive. It’s giving the driver more control, but it’s not giving the shipper or receiver more information, unless there’s a problem.” This is why Lund prefers active devices, which are seeing a slow but steady increase in production and availability. “There are about four manufacturers now, so there’s a little more competition. They’re making the product better, cheaper and faster. When you get the temperature and location every five minutes, it’s a game-changer.”

It’s not just spoiled produce that transport companies need to worry about. Theft, while not as common, is a factor, as well. “Produce loads are stolen more than people realize,” says Ken Lund, vice president, Allen Lund Company, La Cañada, CA. “The people stealing the trailer don’t know there’s a device in it. So we’ve actually helped recover loads.”

Amy Childress, vice president marketing and planning, Cargo Solutions, Emerson Commercial & Residential Solutions, Boise, ID, recently has seen this with an attempted robbery on their Chilean distributor of Emerson GO products, Saieg & Maggi. A delivery was stopped by armed assailants. Childress explains, “The truck was equipped with standard GPS tracking and a single Emerson GO Real-Time Lux Tracker. Due to the unscheduled nature of the stop, the GPS unit in the cab of the truck sent a warning out when the truck came to a halt.” The savvy thieves used a jammer to block the GPS signals from being sent, however, the tracking device continued to send location information for another 10 miles, at which point the police were able to stop the truck. “The two technologies coupled together provided the added security needed to prevent the truck being stolen and future thefts,” says Childress. “In addition to keeping the driver safe, the load valued at $240,000 was recovered, along with the truck.”

Natural disasters also can adversely affect loads. Like a robbery, they cannot be predicted, but technology can help mitigate the damages. As Mark Petersen, vice president of temperature-controlled transportation for C.H. Robinson, Eden Prairie, MN, explains, “Technology is allowing us to start to understand and better predict both natural and man-made issues such as traffic, seasonal volume fluctuations and other factors. Once these potential issues have been predicted or suspected, alternative routes and sources can be factored into the logistics equation.”

C.H. Robinson and the contract carriers they work with as third-party logistics providers now can adjust to avoid potential issues faster than they ever have in the past. “Being aware of how historical trends can limit or change capacity is one way to stay ahead of capacity challenges,” says Petersen. “After all, seasonal and regional factors will likely continue to overlap and impact capacity. Proactive planning is key to helping eliminate some of the uncertainties of a tight market, too.”

Controlling risk, both predictable and unforeseen, allows those on the shipping and receiving ends, as well as those in the middle, the ability to meet the demands of their consumers without sacrificing freshness. This in turn increases profits, which is the collective goal of every player in the produce industry.

(Story originally printed in the March 2019 issue of Produce Business.)