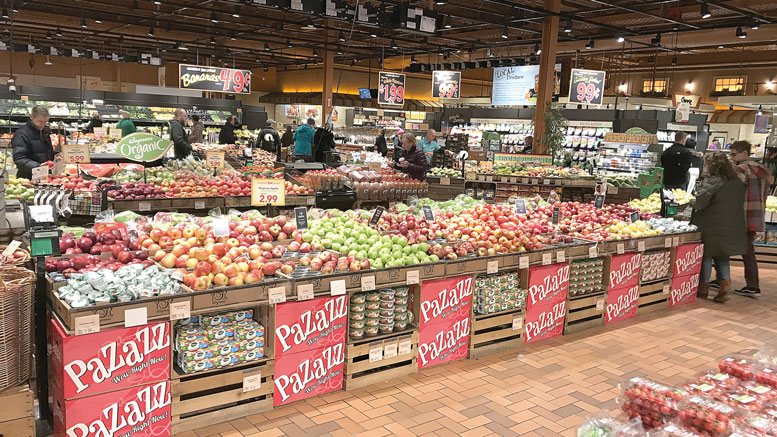 Eastern retailers capitalize on the lower transit miles and local attributes of The Empire State’s apples.

Historians say settlers brought the first apples to the U.S. in the 17th century. In fact, it was New York’s Colonial Governor, Peter Stuyvesant, who is credited with planting an apple tree in 1647 at what is now Manhattan’s East Village. Today, these trees flourish in six regions throughout the state. Collectively, the fruits of these trees rank New York as the second-largest apple producer after Washington. Last season, the state’s growers produced 722 million pounds or around 15 million bushels of apples for the fresh market, with a value of $209.4 million, according to the USDA’s National Agricultural Statistics Service’s 2019 State Agriculture Overview. So, you could say that all of New York, not just the city, should be nicknamed the Big Apple.

“When the temperatures start to cool in Mid-September and the New York apples are being harvested, we transition the focus of our merchandising efforts in stores from summer type fruit to the flavors of the fall anchored by New York apples,” says Jeff Cady, director of produce and floral for Tops Friendly Markets, a 157-store chain headquartered in Williamsville, NY.

From the lake-effect elements on the shores of Lake Ontario to the wet springs of the Hudson Valley, New York’s apples are flavorful and juicy, adds Kaari Stannard, president, CEO and chief financial officer for New York Apple Sales, in Glenmont, NY. “The wet climate makes it difficult to grow organic apples because pests love wet weather. However, we use crop consultants, university-based research, and follow federal and state guidelines to protect our crops and our customers.”

There’s nothing old-fashioned about New York’s two-century-old commercial apple farming industry. For example, this year, Stannard says that instead of SweeTango growers clipping leaves away from the apples to expose the fruit to light to color, a new technology is being used that blows the leaves off, thus continues a move to a mechanized orchard.

Post-harvest, says Rocky Surace, account manager for the Sun Orchard Fruit Co., in Burt, NY, “we’ve implemented a new technology in our long-term storage regime on a few varieties called HarvestWatch. This allows us to create a Dynamic Controlled Environment inside our controlled-atmosphere rooms and store fruit at its low oxygen limit. This provides us multiple benefits, including extended storage life of the apples as well as improving quality, which creates a better return for our growers.”

The New York Apple Association (NYAA) estimates this year’s total harvest for fresh and processed apples will be around 30 million bushels of apples. That is down from last year, but barely, and on par with the state’s five-year average. Growers report a good range of sizes.

Empire and McIntosh are two long-time staple varieties of the state.

“Empires work well in sliced programs such as for schools and QSR programs,” says Austin Fowler, vice president of sales and marketing and co-owner of Fowler Farms, in Wolcott, NY. “McIntosh has an especially good foothold and has maintained a single-digit spot year after year in national data rankings of major apple varieties grown in the U.S. What we are seeing less production of in the state are varieties like Cortland, Jonagold, Macoun and Red Delicious.”

While not exclusive to New York, the best-selling varieties over the past couple of years have been Honeycrisp, Gala, and Fuji, according to Sun Orchard’s Surace. “The biggest changes to the apple industry in general over the last decade are the introduction of Club or “managed” apple varieties that have created a premium branded apple category. For us, our up-and-coming variety is the Pazazz, a Honeycrisp cross. We are in our ninth year marketing the apple and although the managed variety market is extremely tough right now, ours is showing promise. Our best retailer showed a 500% increase in volume this past season.”

This season is the first that New York Apple Sales will market its Smitten variety, and next year the company expects its first substantial harvest of Rave variety apples.

The two newest apple varieties to hit the market that are New York natives, developed by Cornell University breeder at the New York State Agricultural Experiment Station in Geneva, are SnapDragon and RubyFrost. Both SnapDragon, a Honeycrisp offspring, and RubyFrost, a Braeburn and Autumn Crisp cross, start harvest in September. SnapDragon, known for its crunch, is marketed immediately, while RubyFrost benefits from storage and begins its sales season in January. This will be the sixth season these varieties are available to supermarket retailers, and production is expected up 30% over the year prior.

“We worked with Category Partners to analyze Nielsen sales data from three major retail chains in the Eastern U.S., and what we found was great news,” says Jessica Wells, spokesperson for Crunch Time Apple Growers, a Lockport, NY-based cooperative of 147 growers who cultivate SnapDragon and RubyFrost. “SnapDragon was one of three apples driving 75% of premium apple sales in those stores. Not only that, but SnapDragon showed the strongest growth in both dollars and volume amongst those varieties. Consistent distribution of SnapDragon by these chains enabled consumers to continually purchase a variety they love throughout the three-month season.”

“Our shoppers are always on the lookout for new varieties of apples, and we love it when we can introduce them to a hot new product like the SnapDragon,” says Charles Yeh, executive director of fresh foods for Stew Leonard’s, a seven-store supermarket chain headquartered in Norwalk, CT. “We’ll certainly have a big display with signage noting that the SnapDragon is grown in New York State.”

On the horizon, Fowler Farms’ Fowler says the grower is test-cultivating a variety of red- and pink-fleshed apple varieties. These are trademarked under the name Kissabel and marketed by the IFORED Group, an international consortium of apple suppliers including the Next Big Thing in the USA, of which Fowler is a member.

“The front of our departments and key focal displays all include apples. We generally have a store contest to kick off the season and get the stores geared up for fall. Basically, this is a ‘Fall Harvest’ contest that is primarily apples, but also includes cider, candy apples, fall squashes, pumpkins and gourds. There is no mistaking that Autumn has arrived at Tops Markets,” says Cady.

Some 60% of New York’s apple crop is sold in some type of consumer pack, say growers.

“The most popular is a 3-pound poly bag, although pouch bags are gaining popularity the past couple years,” says Sun Orchard’s Surace.

COVID-19 has impacted consumer shopping habits, and a lot of retailers have indicated that bagged and packaged options have seen an increase in sales, says Hudson River’s Albinder Camac. “We expect this trend to continue, and we have increased our line of packaged options for retailers to choose from.”

“Including apple slices with displays of other precut fruit is important so consumers can enjoy the convenience of apple slices just as they do other cut fruit. And nut butters and yogurt, yummy chocolate and caramel are always a popular mix. Do not forget the fresh cider. The fall harvest grouping is always popular,” says the NYAA’s Haskins of the benefits of cross merchandising.

To tie into more consumers cooking at home in the wake of COVID-19, the NYAA has produced 41 how-to recipe videos, 21 of these recently produced and featuring Kelly Springer, registered dietitian for NYAA, who dishes out healthy tidbits along with the how-to-healthy recipe videos. The NYAA makes these available to retailers to use on their social media and digital platforms.

In a novel way to cross merchandise, Crunch Time Apple Growers put SnapDragon and RubyFrost apples into mail-order meal kits of more than 400,000 consumers along with a recipe and product information. The response was positive and generated additional consumer awareness and demand, according to Wells.

About 30% of New York grown apples are sold to markets within the state, says Sun Orchard’s Surace. “A good way to promote this is for retailers to talk about the quality that comes from our growers and the region. Also, especially for Eastern retailers, New York apples often have far fewer miles to market than say Washington where many of the nation’s apples are grown. That’s a great locally grown and sustainability message to get out to shoppers.”