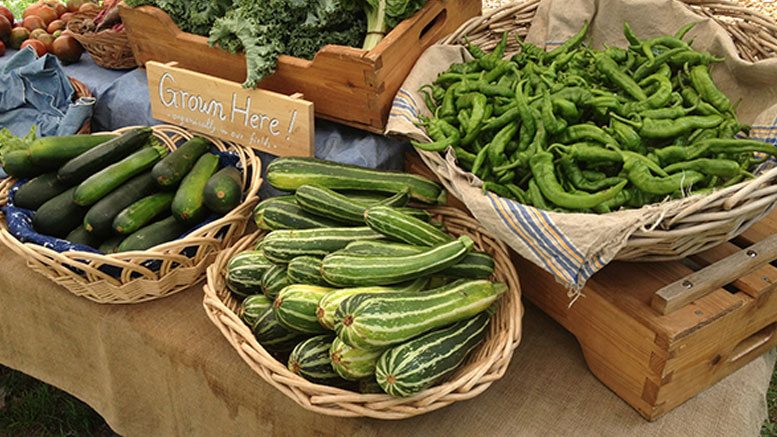 New York City might be nicknamed the “Big Apple,” but this Mid-Atlantic state, as a whole, is well-known for its vegetable production. In fact, New York ranks fifth in the nation in acres harvested for fresh market veggies, according to U.S. Department of Agriculture (USDA)’s National Agriculture Statistics Services (NASS) Vegetables 2015 Summary, published in February 2016.

“Everything you see in the market can be grown in New York, except citrus and tropicals,” says Richard Ball, commissioner of the Albany, NY-based New York State Department of Agriculture and Markets (NYSDAM) and a vegetable grower himself as owner/operator of Schoharie Valley Farms, in Schoharie, NY.

“New York is in a good place due to the temperate climate, access to water, and good farming practices that date back generations,” he says. “These attributes position the state nicely to potentially take some of the vegetable business back from the southwestern U.S., where there have been a number of weather challenges this year. Additionally, New York vegetables can reach nearly half the U.S. population in 24 hours or less, so the freshness is really there.”

New York consumers’ interest in local or state-grown produce has made offering these products seasonally a high priority to retailers.

“New York-grown vegetables are very important to our customers. It’s something they look for and anticipate,” says Jeff Cady, director of produce and floral for TOPS Friendly Markets, a Williamsville, NY-headquartered chain that operates 169 full-service supermarkets in upstate New York, northern Pennsylvania, and western Vermont. “They understand that local means environmentally friendly and that it comes from and supports their neighbors.”

“During the season, for example, we’ll offer New York-grown leaf lettuce, cucumbers, sweet corn, cabbage, summer squash and tomatoes. If our farmers grow it, we find a way to get it in-store. It could be direct-store-delivery, or farmers delivering direct to our warehouse. Or, we work with co-ops who get product from smaller farms, aggregate it, and either send it to our warehouse or supply some of our stores directly. That’s how important local produce is for us,” adds Cady.

The Top 10 traditional vegetables grown in New York in terms of dollar sales put $324.4 million into the state’s funds in 2015. The Top 5 of these — cabbage, snap beans, potatoes, onions and sweet corn — represent three quarters of this figure.

Cabbage, brought here by Dutch immigrants and cultivated since the 17th century in New York, is a major vegetable crop grown on a fifth of the total 15,000 acres at Torrey Farms, a grower/shipper of fresh vegetables located in Elba, NY.

“We start harvest around July 10 and sell fresh-cut from the field until December, then out of cold storage until May or June,” says sales and marketing team member Shannon Kyle. “This makes New York-grown cabbage available for 11 months.”

Snap beans are another major volume crop for Torrey Farms. The beans are sold not only in state, but also east of the Mississippi, north and south along the East Coast, and occasionally into Canada.

Potatoes, specifically all-purpose round white potatoes as well as a smaller percentage of yellow-flesh, red-skin, and fingerling varieties, are the primary commodity sold by theBushwick Commission Co. in Farmingdale, NY.

“Potatoes are a high-volume commodity here in New York,” says general manager Mark Turner. “We harvest in August and ship from storage until February out of Long Island and into May from upstate, where the majority of potato acreage is now.”

Summer storage onions are the largest crop for Torrey Farms, with availability 10 months from July through mid-May to mid-June. The emphasis, according to Kyle, is 4-inch or larger diameter jumbo onions for loose bulk sale at retail to compete with western onions.

The family-owned Holy Schmitt’s LLC, in Riverhead, NY, double-crop veggies on its 250-acre farm on Long Island. Horseradish is the first harvest in March. Next come scallions, arugula, radishes, cilantro, dill and parsley in April and May; collards and kale in June; carrots and cabbage in July; and winter squash in September.

“I plant every week starting at the end of March until August 15,” says third-generation owner Matt Schmitt, whose farm sells to local farmers markets as well as serves as a one-stop shop for wholesalers at the Hunts Point Produce Market, distributors such as Bozzuto’s, J. Kings, and Baldor; and retailers, such as King Kullen and ShopRite.

Four trends are adding to New York’s ability to deliver a wide variety of vegetables.

Firstly, Cornell University plant-breeders worked to develop varieties of broccoli, cauliflower, and Brussels sprouts that can withstand the heat of an East Coast summer in order to be less dependent on West Coast supplies. In fact, Turek Farms not only grows this trio of vegetables, but also has recently installed an ice plant capable of making 50 tons of ice daily to cool these vegetables as well as its signature sweet corn.

“The cold weather in New York creates sweetness and takes the bitterness out of broccoli, cauliflower and Brussels sprouts, so taste is an advantage for us,” says Turek.

Secondly, organic produce is a growing market that is being embraced by mainstream farmers.

“We are in the process of converting 1 to 3 acres of our overall 2,000 co-op acres to organic and will start dabbling with growing organic cucumbers and cooking greens,” says Dave Walczak, sales and operations manager for Eden Valley Growers, Inc., in Eden, NY, which last season became a Western New York Food Hub (a vegetable growing food cooperative) and added 15 to 20 non-member farms for which the co-op markets and distributes.

“Hot peppers, different varieties of eggplant and cauliflower in green, purple and orange are some of the more unusual crops we get from our farmers,” says TOPS’ Cady.

Similarly, New York-grown bok choy and chili peppers are hot sellers at Morton Williams, an 18-store chain based in Bronx, NY. Produce director Marc Goldman says he sources these items as well as mainstream state-grown veggies from wholesalers like S. Katzman Produceon the Hunts Point Produce Market since the chain doesn’t have a warehouse and most farmers are not able to take the time to drive their crops directly to the chain’s stores in New York City.

Fourthly and finally, farmers are looking to extend the season via climate control measures such as row covers, high tunnels, and greenhouses. This helps the state’s growers compete beyond the traditional 12-week summer season when other states like New Jersey and Michigan are also in the market.

“Consumers today want to know more about their food, where it comes from and how it’s grown,” says Commissioner Ball. “At the same time, there is confusion in the marketplace about labeling terms and what local means. New York State Certified was created to connect the dots by strengthening shoppers’ confidence in New York products and to help our farmers take advantage of the growing market demand for high-quality foods.”

An official on-product label and a multi-million-dollar ad campaign aimed at institutional buyers, restaurateurs, and retail consumers accompanies this initiative.

“Signage is difficult, especially in our Manhattan stores since space is at a premium,”  says Morton Williams’ Goldman. We don’t want to post a sign that blocks customers’ view of the produce, although we’re looking at shelf strips to solve this problem. Currently, we call out New York-grown vegetables in our weekly circulars. Local is more important to customers now than it used to be.”

TOPS Friendly Markets promotes state-grown veggies under the retailer’s ‘There’s No Place Like Homegrown’ program. This includes dedicated displays as well as signage of New York grown vegetables, often accompanied by the farm’s name and farmer’s photo when sold in its customary category. In addition to its weekly flier, TOPS runs an entire locally-grown ad during the heart of the season when produce supply, quality, and price at are its peak. Social media such as Facebook and Twitter let shoppers know what’s in season and cross-merchandised Meal Solutions often include state-harvested ingredients.

“This year, we are running eight display contests throughout the summer for our Home Grown program. We’re calling this the ‘Produce Summer Olympics,’ to tie in with the excitement about the Olympics. There will be weekly themes like the Homegrown Hurdle where produce managers will build themed displays with the fresh local produce available that week, and compete for cash prizes. It’s something we think will really highlight New York-grown produce and will also be an extra exciting in-store event for our customers,” says TOPS’ Cady.