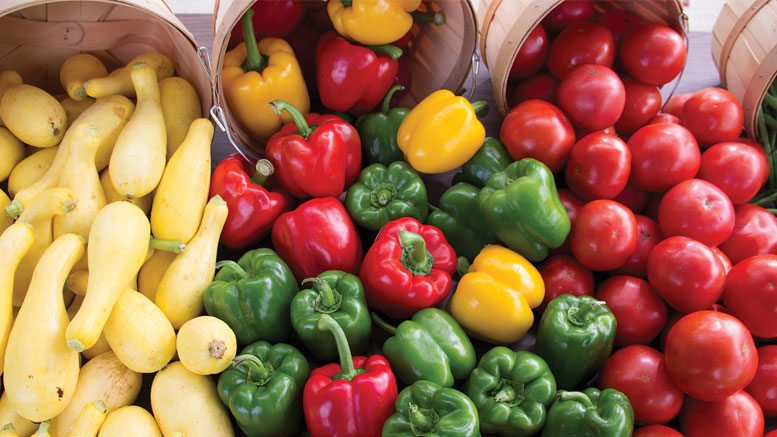 During the winter, The Sunshine State’s bounty supplies most of the country and Canada.

During the Florida time of year, the Sunshine State’s farmers harvest an incredible variety of crops while most of their counterparts elsewhere in the country still wait patiently for the snow to melt.

“Our peak season is currently underway with the winter harvest,” says Maria Brous, director of media and community relations for Lakeland, FL-headquartered Publix Super Markets. “As the rest of the country is getting colder, we are in prime time for Florida produce. We have everything from squash, zucchini, beans, peppers, cucumbers to citrus and strawberries. Our season will continue through February and March. In true spring, we have some watermelon, blueberries, Athena cantaloupe and avocados in June.”

Publix highlights the arrival of the local produce with its At Season’s Peak program, and the state Department of Agriculture sponsors a Fresh from Florida logo that alerts consumers throughout the state, and a little beyond, that fruits and vegetables from nearby farms have arrived.

The appeal of local produce is strong, but Florida farms also occupy an important time slot — a little later than Mexico and earlier than California — in supplying U.S.-grown fresh vegetables to most of the eastern half of the country. “The spring crop goes from the middle of March to the middle of May,” says Mike Shier, sales manager at Six L’s Packing Company, Immokalee, FL. “I think the whole Northeast looks forward to Florida produce after the Mexican deal winds down. The state of Florida promotes it heavily. For me, green peppers, cucumbers and eggplant are the biggest spring vegetables.”

Food For The East

When shipments of tomatoes, peppers and squash from Mexico begin to wind down, Florida has a near monopoly on vegetables over a wide area that includes the eastern half of the country, and even into Canada.

Spring is the season Florida ships many mainstream vegetables to most of the country east of the Mississippi. “We are known for tomatoes, cucumbers, snap beans, peppers and, of course, sweet corn, in addition to other crops,” says Lisa Lochridge, director of public affairs for the Florida Fruit and Vegetable Association (FFVA), Maitland, FL. “In the spring, Florida is sort of the Salad Bowl for the United States.”

“We are known for tomatoes, cucumbers, snap beans, peppers and, of course, sweet corn in addition to other crops.
In the spring, Florida is sort of the Salad Bowl for the United States.”

The Florida Fruit and Vegetable Association is an advocacy program for the state’s farmers, but it does not participate in promotions. But while the Florida vegetable harvest generally comes a little later than Mexico, the state’s growers are still in competition with product from below the border, especially when it comes to staples like tomatoes, peppers and squash. “Until April, the tomatoes will come out of the south end of the state,” says Chuck Weisinger, owner of Fort Myers, FL- based Weis-Buy Farms, which grows and ships tomatoes, peppers and cucumbers outside of Florida. “On the west they grow as close to the Gulf of Mexico as they can, and as close to the coast as they can on the east. Later in the spring, we move north. We’re looking at pretty good volume from the early spring this year.”

An important marketing strategy in the early spring, when the Mexico deal is still steaming, is to emphasize the country of origin of the Florida vegetables. “With the competition from Mexico, the growers are promoting them as from the United States,” says Weisinger. “The Florida Tomato Commission markets the product. The Department of Agriculture also has some money to promote the products.”

Lochridge agrees with the strategy of pointing out the country of origin, saying, “I think most people believe domestically grown produce is generally of higher quality.” These promotions work, especially when they connect the consumer and the produce with familiar spring eating events. “When you have a big special on watermelon and cantaloupe, people want them; but if you’re into salads, the peppers and cucumbers are a draw,” says Tom O’Brien, president of C & D Fruit and Vegetable Co., Bradenton, FL. “Our spring vegetables include squash, beans, peppers and cucumbers. Our spring season begins around the end of March or beginning of April, and goes to the end of May.” 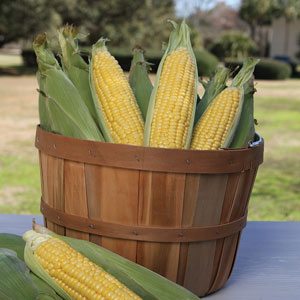 Another approach Florida growers take to the competition is constant tinkering to come up with newer and either better or less expensive varieties of familiar vegetables. “We’re growing tomatoes that have more flavor than before, and are firmer,” says Weis-Buy Farms’ Weisinger. “They have longer shelf life, unless you make a mistake and refrigerate them. You get them below 50 degrees, and you mess them up.”

A number of Florida shippers are also moving colored bell peppers from the greenhouse to the open fields. “We’re launching open field red and yellow bell peppers,” says Creel. “They look amazingly close to the greenhouse-grown. We’ve been looking at it for three or four years, and this is the first we’ve gone commercial with it.”

While the main staple vegetable crops out of Florida remain unchanged, there is a bit more of a greenish hue these days, as in Northern California-style greenish. “We purchased a new organic farm in Florida; it’s a good size farm,” says L&M’s Creel. “We’re going to grow black kale, kale, green cabbage and broccoli. We already have another organic farm in the state where we grow zucchini, cucumbers and green bells. We have been getting more calls for organic.”

In addition to offering more than one kind of organic kale, L&M Companies is also increasing its acreage of broccoli, the healthy crucifer Japanese farmers introduced to California decades ago. “We’re growing more broccoli and colored potatoes than we were 10 years ago,” says Creel. “We were already cutting greens in December 2016, and will go through April. We harvest colored potatoes from the beginning of February until June. A great deal of what we grow in Florida leaves the state and goes as far up as Maine, and as far over as the Great Lakes.”

“We’re growing tomatoes that have more flavor than before, and are firmer. They have longer shelf life, unless you make a mistake and refrigerate them. You get them below 50 degrees, and you mess them up.”

In addition, the nation’s largest grower of wild rocket arugula and watercress, B&W Quality Growers, is also based in Florida, not California. This increased interest in organic, broccoli and leafy greens looks to be in addition to the old Florida standby vegetables, as nothing is significantly decreasing in acreage. “I don’t know of anything whose acreage has significantly decreased or increased in the last few years,” says FFVA’s Lochridge. 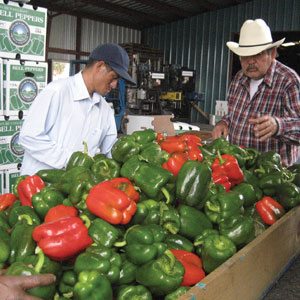 As consumers in the Northeast are drawn to U.S.-grown produce from the fields of the Sunshine state, Florida residents are even more interested in vegetables from their local farms.

“People are interested in where their food comes from, and this gives us an opportunity to talk about the quality of the produce we grow here,” says FFVA’s Lochridge. “People are also interested in more locally grown food.”

Publix, in particular, with more than 1,100 stores in the state, has an entire program built around produce in season locally. “We have a whole campaign, At Season’s Peak, for our customers where we remind them of the true seasonality of fruit and vegetables — when they are at their most delicious,” says Brous.

The program’s website, publix.com/products-services/produce/at-seasons-peak, gives consumers advance notice, for example, that sweet corn and vine ripened tomatoes will be available in May. There is even consumer interest in varieties that have earned reputations as grown in a particular area within the state. “Florida, especially Plant City, is known for its strawberries,” says Brous.

Six L’s sources from many areas, but takes special pride in the vegetables it ships out of the southern area of the state. “We refer to it as South Florida, the Immokalee, Palm Beach, Homestead area,” says Shier.

There is also highly regional production of the tropicals, mostly fruits, but also including some vegetables. “Florida tropicals are still in season, just the tail end of their seasons,” says Mary Ostlund, marketing director at Brooks Tropicals LLC in Homestead, FL. “Florida avocados, star fruit, passion fruit, some red guava and Thai guava are being harvested in early spring. Brooks Tropicals has planted different varieties to successfully extend the availability of our popular tropicals. Sometimes growing them on different coasts help extend harvesting. And by different coasts, we mean Florida’s east and west coasts.”

Florida ranks second only to California in vegetable production, and the state’s farmers harvest a robust $1.3 billion in vegetables and melons, according to U.S. Department of Agriculture statistics.

While broccoli, kale, leafy greens and other crops more commonly associated with coastal California are all increasing in the Sunshine State, Florida’s vegetable production is still led by a more familiar magnificent eight.

Tomatoes. With a crop approaching a half billion dollars a year, and easily more than one-third of the entire U.S. harvest, Florida is the national leader in fresh market tomato production.

Bell Peppers. Here the state’s growers are second in the nation, with an annual harvest of $220 million, or more than one-quarter of all the bell peppers in the country.

Sweet Corn. No barbecue would be complete without sweet corn, and Florida’s farmers, at more than $150 million annually, harvest nearly a quarter of the U.S. crop.

Potatoes. Florida is second in the nation in its production of spring harvested potatoes.

Snap Beans. One-third of the snap beans in the country come from Florida, where farmers lead the nation with a harvest of more than $75 million worth every year.

Cucumbers. Florida leads the country here, too, with nearly $65 million a year, or well over a third of the U.S. crop.

Cabbage. Available from December through May, cabbage is the state’s seventh most valuable vegetable.

Squash. This is another Florida special, as the state’s growers harvest nearly one-sixth of the nation’s crop.

The state publishes a calendar of availability of its major fruits and vegetables, as well as monthly lists at freshfromflorida.com/Divisions-Offices/Marketing-and-Development/Education/For-Researchers/Crops-in-Season.