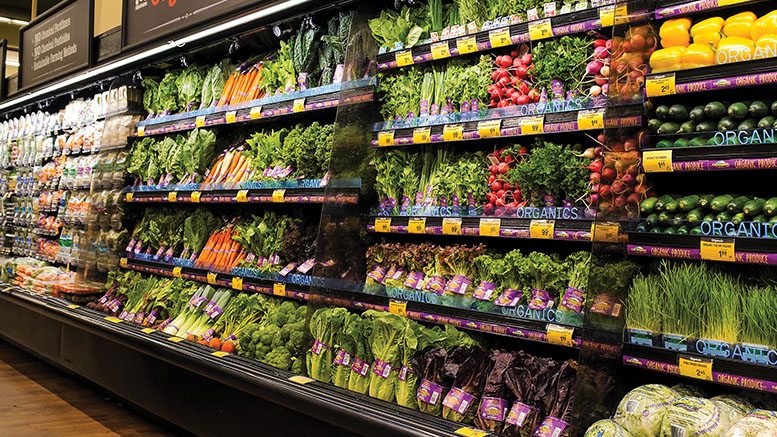 Price is the No. 1 factor cited as a purchase influencer by food shoppers of all types, but it’s not the only reason. The next most important attributes are ‘healthy, nutritious choice’ and ‘taste,’ according to the 2017 U.S. Families’ Organic Attitudes and Beliefs Study, published by the Washington, DC-headquartered Organic Trade Association (OTA).

Although organics is typically priced higher than its conventional counterparts, sales of organics and especially organic produce are booming. The organic fruit and vegetable sector, which accounts for nearly 40 percent of all organic food sales, grew 8.4 percent in 2016, almost triple the 3.3 percent rate of total produce sales, according to the OTA’s 2017 Organic Industry Survey. One reason for this may lie in a lessening of the organic premium.

“There’s a market for those people who are loyal to organics and choose to vote with their dollars — whether it’s due to health concerns or a personal mission,” says Jeff Fairchild, produce buyer for New Seasons Market, a 20-store chain headquartered in Portland, OR, where an average of 75 percent of produce sold is organically grown. “Others are more value driven, and if you can offer them a reasonable and sustainable price on organics, you’ll bring them in-store. Organic shoppers are good ones to have because they tend to purchase more produce overall.”

The organic premium is the price difference between the organic and the nonorganic price of an item when factors such as the type of store sold, time of year and geographic location are the same, as defined by the USDA’s Economic Research Service (ERS) in its May 2016-released report, Changes in Retail Organic Price Premiums from 2004 to 2010. This report looked at 17 organic foods, six of them fresh produce, using 2010 Nielsen Homescan data. Results showed premiums ranged from 7 percent for fresh spinach to 60 percent for salad mix.

This premium doesn’t necessarily deter sales. For example, 17 percent of people who purchase organic at least sometimes were willing to pay up to 35 percent more for organic vegetables, and 27 percent were willing to pay 20 to 34 percent more, according to the Organic & Natural 2016 report, by The Hartman Group, in Bellevue, WA. This is especially true of Millennials, who prioritize spending more on food they see as higher quality, healthier and better tasting. Millennials, those aged 18 to 34, overtook Baby Boomers as the largest consumer group in 2016, according to U.S. Census Bureau data.

It does cost more to cultivate organically grown fruits and vegetables.

First, there’s the land itself, explains Mayra Velasquez de Leon, chief executive of Organics Unlimited, an organic banana and tropical fruit grower/shipper headquartered in San Diego. “Organic bananas must be grown on land that is suitable for organic use and can be certified as such. This means it must be either virgin land (nothing grown on it previously or only organic grown on it), or if it was used for conventional farming, a process must be undertaken to convert it to organic farming soil, which can take some time. This means that land is not ready-accessible cheaply.”

“One of the biggest differences compared to conventional is organic farmers have fewer ways to deal with big pest problems,” says Nathalie Fontanilla, Earthbound Farm’s vice president of research, development and innovation. “We have to work hard to build a balanced ecosystem on our farms so no one pest takes over. When everything’s in equilibrium, we see yields very similar to conventional farms for the same crop. But there’s a lot we must do manually, such as weeding. That’s inherently going to create more cost. As organic farms gain scale, we do gain some efficiencies, though, and that helps us offer items priced more competitive with conventional.”

Third, organic certification adds to the price for organic produce.

“Organic is the most highly regulated food system in the world,” says Angela Jagiello, the OTA’s associate director of conference and produce development. “It includes a system that assures consumers the products maintain the organic integrity that begins on the farm. Because U.S. organic standards are in place, these practices are regulated and verifiable. There is both a cost and a value associated with organic practices and maintaining organic integrity from farm to shopper.”

The fundamental economic principal of supply and demand also impacts the price of organic produce. On one hand, demand is strong. A nationally representative study of 100,000 households conducted in 2015 and 2016 by Nielsen and released in March 2017 by the OTA showed more households than ever bought organic food on a regular basis.

More specifically, the national average climbed 3.4 percent in 2015 to 82.3 percent. The state showing the biggest jump in households purchasing organic was North Dakota, where 85.6 percent of households participating in the Nielsen study reported buying organic in 2016, up 14.2 percent from 2015. Mississippi reported the lowest household penetration at 70.1 percent in 2016, but this was up from 67.5 in 2015. As might be expected, the states of Washington, Colorado and California recorded the highest overall penetration with percentages in the nineties.

On the other hand, the availability of organic produce is increasing too. For the first time, organic farmland in the United States climbed to more than 5 million acres, a 15 percent increase since 2014, according to the USDA’s National Agricultural Statistical Service’s (NASS) Certified Organic Survey 2015, released in September 2016.

At the same time, the share of organic to total imports grew to 8.5 percent, a 2.1 percent increase from 2011 to 2016, based on USDA Global Agricultural Trade System (GATS) data. Bananas represented the leading fresh produce organic import. What’s more, nearly 3 out of 4 conventional grocery stores in the United States carry organic products, according to the USDA ERS’s Organic Market Overview, updated April 4, 2017.

“More organic produce is grown and produced globally, which in turn has narrowed the cost gap between organic and conventional due to the greater influx in supply. That said, there are still wide variations.

Berries seem to have the biggest gap in cost versus conventional. Organic berries can be a challenge to get in late fall and winter. Packaged salads have the smallest gap because of more consistent year-round supply.

“Salads represent, in most cases, 25 percent-plus of the organic produce category at retail,” says Jay Schneider, produce director at Acme Markets, a 179-store chain headquartered in Malvern, PA, which is part of the 2,200-plus Albertsons family of banners.

Packaged salads are the No. 1 fresh organic category at retail, according to Nielsen FreshFacts data for the 52-weeks ending October 28, 2017.

“Our salads and Romaine hearts are typically priced within 10 to 20 percent of their conventional counterparts, making them both attractive and accessible to more people. They’re an easy entry point for new consumers,” says Earthbound Farm’s Harris.

The remainder of the top 10 organic sellers, according to Nielsen and in descending order, are: berries, chicken, herbs/spices/seasonings, apples, beverages, carrots, bananas, value-added vegetables and lettuce.

Year-round supply certainly helps stabilize pricing from a supply and demand standpoint, says Matt Seeley, chief executive of the Organic Produce Network, based in Monterey, CA. “Therefore, organic growers look to provide consistent ongoing supply, whether it’s growing or sourcing in different areas of the United States based on the season or lining up import partners to cover times of the year where availability in the United States is low or none.”

Addie Pobst, organic integrity and food safety coordinator at Viva Tierra Organic, in Mount Vernon, WA, agrees. “We source organic apples and pears for half the year from California and the Pacific Northwest and the other half we import from Chile and Argentina, to get a regular supply.”

Greg Holzman, founder and chief executive of San Francisco-based Pacific Organic Produce and Purity Organics brand juices, started importing organic grapes into the United States this winter from Peru. Historically, sourcing organic grapes in the first few months of the year has proved challenging because those from Chile, the main supplier to the U.S. at this time, must be fumigated. No fumigation is required for Peruvian grapes.

“There will continue to be a demand for organic imports to fill in supply demand that domestic production can’t fill alone,” says Van Argiros, director of produce procurement for Albert’s Fresh Produce, in Santa Cruz, CA.

“Every year we see new items in the organic stream such as papaya and habanero chilies, as well as holes in supply filled for items like asparagus and artichokes,” says New Seasons Markets’ Fairchild.

In the end, because of factors such as efficient organic agricultural practices, ever-growing economies of scale and greater supply to meet demand, the organic premium in general is narrowing and in some cases non-existent. For example, Clementines, lemons, mangos, beets, cucumbers and Romaine lettuce were advertised from 23 to 54 percent lower than the price of conventional at major retail supermarkets during the week of January 19-25, 2018, according to the USDA’s Agricultural Marketing Service’s (AMS) Weekly Retail Organic Price Comparison. Meanwhile, the organic premium ranged from 0 to 7 percent for Navel and Valencia oranges, Boston and Romaine lettuce, orange and yellow bell peppers and round red-skinned potatoes during the same week.

“It really does depend on the commodity,” says Ben Johnson, president of Bridges Organic Produce, in Portland, OR. “There will be periods of scarcity when organics will be double or triple the cost of conventional, and other times we find ourselves in a supply-exceeds-demand situation, and there is virtually no price difference or the organic is actually cheaper.”

That said, Johnson adds, “the trend toward lower FOB prices or organic may not translate to retail. Category price management and FOB pricing do not necessarily correlate.”