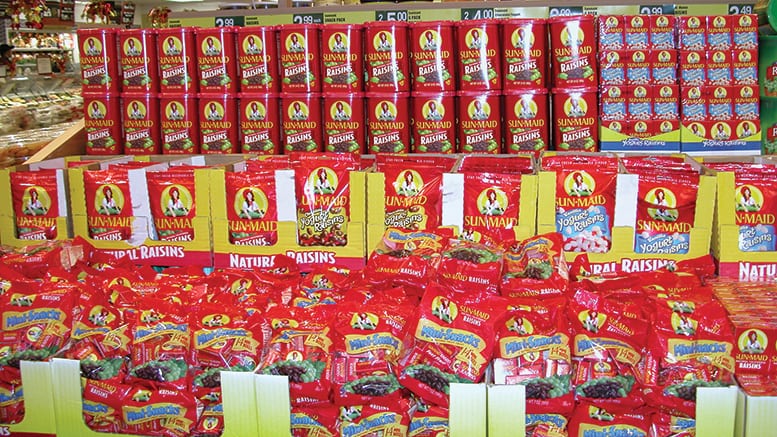 Americans love raisins for lots of reasons, and each of those reasons is another opportunity for smart retailers to boost their sales.

Health remains a major driver. Raisins are an excellent source of the trace mineral boron, antioxidants, dietary fiber and the vitamins B1 and B6. Older consumers like them because raisins are often suggested as a way to promote regularity because of their high fiber content. Researchers at Oregon State University found raisins could be used as an alternative to sodium nitrate — a preservative used in bacon, jerky and lunch meats — which has been shown to break down into a cancer-causing chemical called nitrosamines.

Americans’ insatiable desire for healthy eating is fueling sales of raisins for salads, snacking, baking, to-go and more. Suppliers are doing their part, presenting consumers with a variety of tasty and innovative product options. For example:

In fact, the demand for raisins is increasing globally, thanks to their varied applications and different health benefits. According to market research analysts at TechNavio in London, the growing popularity of a vegan diet is one of the key emerging trends in the global raisins market. In a May report, its TechNavio analysts said, “The number of consumers adopting vegan diet is increasing globally, thereby increasing the demand for raisins.” Though conventional raisins accounted for nearly 57 percent of the market last year, that marketshare is expected to trend downward by 2022. “The fastest-growing product is organic raisins, which will account for nearly 44 percent of the total marketshare by 2022,” according to TechNavio’s analysts.

Consumers and retailers alike love raisins’ versatility, which has implications – good ones – for the potential effectiveness for in-store marketing and merchandising strategies.

“Organic raisins continue to show growth in the marketplace,” notes Mitch Wetzel, vice president of sales for Sunview Marketing International in Delano, CA. All of Sunview’s jumbo raisins are made using dried table grapes. “They are larger than the majority of the raisins you will find in the marketplace.” Consumers love them, he adds, because “raisins are available year-round, and a great natural healthy snack.”

“Raisins are a popular promotional display item, since they respond well to impulse buys,” says Stephanie Harralson, director of marketing, North America, for Sunsweet Growers in Yuba City, CA. “They can sometimes be placed near other snacking fruits such as apples, or grouped with other healthy snack items, or on a shelf set with other dried fruits that is adjacent to produce.”

Executives at Sunsweet have found six-pack raisins are one of the most-popular forms, since raisins are a popular snacking item for both kids and adults. The Del Monte cannister is a top item for consumers who purchase raisins frequently, whether for snacking or baking.

Home bakers love to include lots of raisins, “but the most common usage is for snacking and as a topping for oatmeal or salads,” says Harralson.

Smart retailers help inform shoppers about uses and benefits they may not have thought of. “Most often, it’s as a healthy snack,” says Harralson. “During the holidays, they are promoted along with other baking ingredients for breads and cookies.”

According to Harralson, the biggest challenge faced by retailers when marketing raisins is “making sure they are easy to find for the consumer, and not hidden on a bottom shelf.” In-store displays are key during the important seasonal timeframes.

Joe Tamble, vice president of retail sales execution for Sun-Maid Growers of California in Minneapolis, says his data shows when dried fruit is located and displayed in the produce department, sales increase significantly when compared to center-store location.

“Many produce retailers have health-focused initiatives, and Sun-Maid is often a key partner in these programs,” he adds. “Retailers frequently use Sun-Maid shipper and pallet displays to help promote these initiatives.”

According to Tamble, more than 20 percent of total dried fruit category dollars are generated from displays. One of the easiest ways for retailers to encourage dried fruit purchases, he says, is to get it up on display. “As health and wellness become more of a focus for many adults and children, dried fruit provides them with a snacking option that makes them feel good about their snacking choices.”

His company offers many different types of raisins and dried fruit shipper and pallet displays to generate impulse purchases. These displays are pre-filled and assembled when delivered to retailers. The displays provide an easy method for retailers to drive sales and increase basket size, with minimal labor costs.

Raisins are one of the healthiest foods available in stores today, with no added sugar and more than 40 items as part of its consumer product portfolio.

The overall dried fruit category continues to show positive trends year over year, including raisins. As more and more consumers are being made aware of the health benefits, the future looks increasingly bright for the category. The No. 1 selling item in the total dried fruit category is the Sun-Maid raisin canisters. Other popular sizes include six-packs, 10-ounce stand-up bags and 12-ounce boxes.

Today’s health-oriented consumer is looking for “simple, real food, and as a result the organic segment of the dried fruit category continues to grow,” says Tamble. “The raisin segment is the most popular, and the fastest-growing segment of organic dried fruit.”

Tamble says there are a number of ways to get the word out to consumers. They include:

Raisins – A Good Fit in Produce