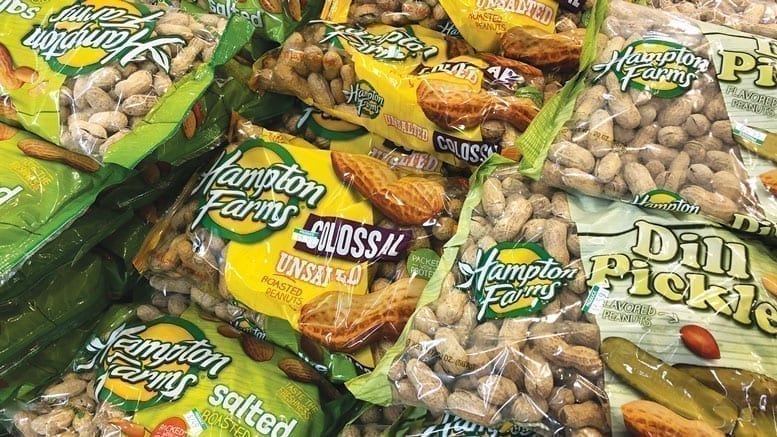 Originally printed in the January 2020 issue of Produce Business.

Peanuts and peanut products are a staple in American culture — and a major opportunity for supermarket produce departments.

Savvy management of this valuable commodity — from keying in on seasonality and usage occasions to eye-catching displays and impactful marketing messages — can result in significant sales spikes throughout the year.

Retailers determined to maximize sales from peanuts are well-advised to focus on the following factors:

Seasonality: Peanuts are an impulse item, notes Bob Sutter, chief executive of the North Carolina Peanut Growers Association, Inc. in Nashville, NC, and should be in front of the produce section to remind shoppers to buy. “Spring and summer are youth baseball’s prime time. Shoppers should be reminded to pick up peanuts to take to the game.” The Asian market in general, and the Chinese New Year, present a “great opportunity” to sell raw shelled peanuts in one- or three-pound bags.

During the run-up to the holiday season, “Allow enough space in the produce department for peanuts to be a destination,” says Chad Hartman, director of marketing for Tropical Foods in Charlotte, NC. “Make sure to have a barrel of in-shell peanuts for sports and outdoor enthusiasts, and bags of in-shell for those same shoppers. Always have shelled snack nuts, including flavored varieties, and this time of year stock raw peanuts for bakers. Make sure to have both raw Spanish peanuts and raw XL Virginia peanuts.”

Aside from the Super Bowl, there are at least 10 peanut-specific holidays, says Lauren Highfill Williams, MAPW, marketing & communications manager at the National Peanut Board, from National Peanut Month in March to National Peanut Day on September 13. “Retailers can help consumers have fun with holidays with special promotions, shelf talkers and displays promoting America’s favorite nut.” Tailgating season in the fall is another great opportunity for peanut promotion, as well as summer grilling, vacations and baseball season.

While sports really remind us of in-shell peanuts, notes Fueston, shelled peanuts and peanut butter “are components of our American lives nearly every day in the form of cookies, pies and the great American PB&J.”

Merchandising: “As you can imagine, we at Hampton Farms are certainly very passionate about the merchandising of peanuts,” Fueston points out, “specifically in shell peanuts in the produce department.”

During times of seasonal and sporting focus such as the Superbowl, major league baseball’s Opening Day and All Star Break, Fueston says, “We think it is key to present the consumer with peanuts via displays that are easily visible as they shop or transverse the produce department. This display should be several feet wide and at least as high as the surrounding display tables to draw attention and capitalize on the impulse interest.”

Hampton Farms’ management finds that the traditional bulk peanut consumer is a staple of the business. “However,” says Fueston, “the younger produce department consumer is certainly focused on the freshness and convenience that a packaged inshell peanut provides. A department that caters to both bulk and packaged consumers is ideal.”

Fueston says that the endcap of a produce table run, or an island at the entrance, provides ideal display opportunities for merchandising peanuts.
Eye-catching displays, he says, are paramount. “The average consumer is not likely to put in-shell peanuts on the shopping list, so we find building attractive displays allows us to capture the impulse and invite the customer to try new flavors and products.”

Stores should carry primarily packaged peanuts, says Hartman, “But always have one bin or barrel for those shoppers who favor scooping their own from bulk.” Any location in produce is fine, he notes, “so long as you create a destination, and all peanuts are in the same area.” In the case of flavored peanuts, retailers should consider cross-merchandising with other snacks or even beverages.

“Because peanuts are typically less expensive than other products in the category, hitting $2.99 for bulk and $2.99 or less for packages is a good idea,” says Hartman.

Sutter recommends providing “sufficient space to display several different items — salted in the shell, unsalted and flavored. Consumers should be presented with choice.” The majority of produce should be in bag, he adds. “Bulk should be raw, and the quantity should match the demand for fresh.”

Flavors: Many brands do extensive research and development for new flavor development, and consider wider food trends and the potential for success in the marketplace. Smaller peanut companies can often prove to be nimbler and experiment more with flavor innovation and line extension.

Taste remains the No. 1 driver of consumer food decisions, and peanuts deliver on flavor and nutrition. Peanuts have more protein than any other nut, and they contain more than 30 vitamins and minerals.

Cajun Hot Nuts have been a staple flavor of in-the-shell peanuts for 20-plus years, says Fueston. “In recent years, the expansion of flavors to include more innovative flavors like Dill Pickle and Tomato Basil has brought the flavor options to the adventurous consumers.”

“I don’t see the interest in flavored peanuts slowing down any time soon,” notes Tropical Foods’ Hartman. “Peanuts are a great product to add spice to, and they work with both sweet and savory flavors.”

Recipes: Choosing peanuts as an ingredient in salads and main dishes has increased “dramatically” over the past five years, says Sutter. “This is due to efforts by the National Peanut Board, which has developed and distributed many excellent peanut recipes.”

Flavored inshell peanuts continue to be introduced with new flavors, he says. “This is driving sales in the mature in-shell market.”

Consumption: Who is consuming peanuts, and how, is obviously of central importance in maximizing sales.

Peanuts can be used in a variety of applications, from savory to sweet and from snacks to entrees. Consumers most commonly eat peanuts directly from the can or jar as a snack. They are also popular eaten in a candy/candy bar, as part of a trail mix and as part of snack bar. Consumption areas that are experiencing particular growth are eating peanuts as part of a dessert, in a smoothie or shake, and as an ingredient in a main dish.

Peanuts have become Millennials’ favorite nut, says Williams, with research showing that at present, 45% of Millennials eat peanuts at least once a week. “The most common way for consumers to eat peanuts is directly from a can or jar, but there’s been an increase over the past four years of consumers buying peanuts to make peanut butter.”

Williams cites research showing that 41% of Millennials and 30% of the general market say they are more likely to buy a grocery item if it contains peanuts or peanut butter.

“The biggest opportunity for growth is with younger demographics, as they’re still establishing their food habits and preferences.” Younger consumers are looking for convenience foods and international flavors, so retailers can merchandize peanuts in grab-and-go areas and sell products with innovative flavors to appeal to this demographic.

Peanuts are also uniquely positioned within the growing plant-forward and plant-based trend, which encourages a reduction in meat consumption and an increase in produce and nuts and legumes like peanuts. “Not only are peanuts a whole, natural food that’s packed with nutrition,” says Williams, “they’re also the most sustainable nut — requiring less than five gallons of water to produce one ounce, compared to the 80 gallons of water almonds require.”

Plant-forward eating styles are growing in popularity. The National Peanut Board “has many on-trend recipes with peanuts in a variety of applications,” notes Williams.

Cross-Promotion: “Peanuts naturally pair with fruit,” says Williams. “Positioning them next to fruits such as apples, bananas and grapes is a good merchandising opportunity.”

Peanuts and a variety of other nuts are also frequently served at parties and gatherings, she adds, “so positioning them next to the packaged vegetable or crudité platters may increase purchases.”

Health: Retailers traditionally have not used health messaging when merchandising peanuts, notes Fueston, but they should.

“Peanuts offer the most protein of any nut per serving — 7g — and represent an excellent source of plant-based protein for those consumers who desire to consume a plant-forward diet,” he suggests. Flavored in-shell and flavored and specialty shelled peanuts “provide the retailer a way to capture the consumers expanding pallet for healthy snacking options.”

Retailers can work with dietitians or other community engagement professionals to host sampling events that feature peanuts, says Williams. Summer fun themes, health fairs, back to school and holiday foods “are great opportunities to host events to move peanuts throughout the year.”

Hartman maintains that the best thing that can be promoted with peanuts is its protein value. “Right now protein snacks are big, and peanuts fit right into that category. Promote the protein value in peanuts and you will grow your sales.”

Retailers often don’t reap the benefit from talking about health benefits, “but they should,” notes Hartman. “Protein, protein, protein.”

Pricing: When it comes to pricing, peanuts “by their nature are a value when compared to the other snacking options available in the department,” says Fueston.

While the consumer expects to recognize a cost advantage to larger packs more than smaller, and bulk more than packaged, he “always realizes the value of peanuts when compared to the other nut options.”