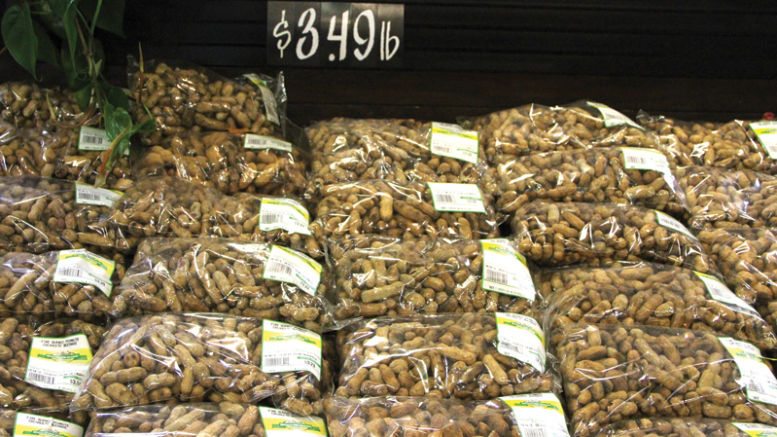 While salted and unsalted peanut varieties are popular standbys, flavored peanuts are also becoming prominent. A number of companies, such as Hampton Farms and Sachs Peanut Company, are offering a variety of flavored peanuts.

“[Sachs Peanut Company is] the only company that’s an exclusive processor of the Tabasco-infused peanuts,” says Terry Williams, national sales manager for Sachs Peanut Company, headquartered in Clarkton, NC. “We work with McIlhenny Company out of Avery Island, LA, and we co-brand that product in our retail packaging so that when people see our Sachs brand and the Tabasco brand combined into one package, it makes a terrific impulse buy.”

An Important Part Of The Market

While the Tabasco-infused peanuts are doing well, they are only a small part of Sachs’ business. “We investigated the possibility of doing co-branding 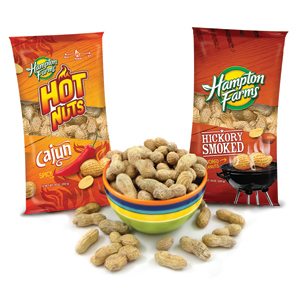 with other companies,” says Williams, who explains flavored peanuts are a small, but important piece of business. “It’s an important part of our business, but not an overwhelmingly large part. We have to spend our production time on the larger selling items, such as the salted in-the-shell and the plain roasted in-the-shell.”

Boonshaft also notes peanuts’ health benefits are another consumer draw. “If you take a look at peanuts themselves, there are tremendous health benefits, seven grams of protein per serving — more than any other nuts — 30 essential nutrients, and are cholesterol-free. There are many health benefits of peanuts, but they don’t always get recognized,” says Boonshaft.

He also notes the local appeal is another draw. “Consumers want protein, clean labels, fresh flavors, and they want local. All Hampton Farms’ peanuts are grown in the U.S.,” says Boonshaft. “We see an opportunity to take nutrient-dense food, such as peanuts, and add flavors that will help bring more people to the category.”

As for the lifecycle of flavored peanuts, Chad Hartman, director of marketing for Tropical Foods, headquartered in Charlotte, NC, believes it’s largely tied to the quality of the product, and he cites the importance of providing consumers with powerful, bold flavors. “I think the phenomena remains strong but has leveled off,” says Hartman. “Shoppers are always looking for bold flavors — a major factor in the flavored nut trend. The momentum of the phenomena is currently a key factor. The strength of this trend will remain strong as bold flavored peanuts are delivered to the consumer, and inferior, bland products find their way out of the market.”

Placing peanuts in high traffic areas and cross-merchandising are two techniques Williams uses to get the most out of impulse purchases. “We have seen the best results on pull-through at the store level whenever the products are put into a high-traffic area because in-the-shell peanuts are very much an impulse item,” says Williams. “Also, when in-the-shell peanuts are cross-merchandised with other items, whether on the soft drink aisle or the aisle with beer in a shipper display case, we find sales show a significant increase there as well.”

While Williams sells both bulk and packaged peanuts, he believes packages are performing the best due to ease of rotation and the ability to maneuver the product into a wide variety of displays. “We sell both bulk and packaged, but I believe at this point in time, packages are outperforming the bulk peanuts — mostly because stores do a better job of product rotation and keeping the product fresher.” Sachs also offers a stay-fresh, resealable bag, which Williams says also helps keep the nuts fresh.

In terms of placement, Hampton’s Boonshaft believes the best place to locate peanuts is “anywhere people can see them,” he says. He also emphasizes it’s important to find a good, visible, permanent location for the snack nuts and to be sure to allot enough space for them. “From a volume perspective, peanuts are more than 40 percent of the total snack nuts category, but they definitely don’t receive 40 percent of the total amount of space,” says Boonshaft. “One of the biggest challenges we have as a company is people finding our product.”

Hartman also points out his favorite flavored peanut merchandising techniques. “The best ways to merchandise flavored peanuts is near the bulk in-shell peanuts, near the salad toppings, or with the other nuts and dried fruits,” says Hartman. “If the peanuts are with the other nuts and snacks, the section becomes a destination, and shoppers will seek them out. If they are merchandised as a stand-alone line, I would suggest a medium-height spinner rack that can be shopped from all sides and moved around from item to item. I have also seen some success when they are merchandised and marketed with salads, salad toppings, and dressings.”

Williams emphasizes the importance of a competitive price point. “We found that price points are very important,” says Williams. “A small pack, if you can put it in on a ‘5 for $5’ table will sell, or you can retail a larger package where there are 3 or 5-pound bags that show significant savings.”

Focusing on affordability is a great way to increase sales, according to Boonshaft, who notes peanuts have an appealing price-point. “Peanuts are a great value in the nut category,” says Boonshaft.

Many retailers promote peanuts around key sporting events, holidays, and summer events. “Retailers have to be creative,” says Williams, who suggests building displays around sporting events such as the World Series and Super Bowl or local events. Keegan Treadaway, marketing and communications coordinator for the National Peanut Board, headquartered in Atlanta, suggests holiday displays as well as sporting promotions and general year-round efforts to sell more peanuts. “Peanuts are something people can enjoy year-round,” says Treadaway.

Sporting events, holidays, and the summer season are all key peanut promotion seasons. “The nut category does very well for holidays,” says Boonshaft, who notes his company also emphasizes baseball promotions. Hampton Farms has a licensing deal with Major League Baseball and sells 12-ounce bags of in-shell peanuts for all U.S. teams. “Local is a trend right now, and people see a bag with their favorite team and feel a connection to that,” says Boonshaft. “Nothing is more American than baseball and peanuts, and with our MLB licensed product, people can have a ballpark experience at home.”

One way to boost flavored peanut consumption is to promote using them on salads. These healthful nuts are a popular salad topping, especially on Asian-influenced salads. Boonshaft notes the healthful benefits of peanuts appeal to consumers and fit with current trends. “Look at what’s on trend today,” says Boonshaft. “It’s protein, it’s convenience, it’s less processed, and it’s local. All those things really fit in with what we’re doing in the peanut industry. I think flavors are a great opportunity for us to increase consumption and sell more peanuts.”

Eating raw peanuts on salad isn’t the only way to increase consumption. “We’re starting to see peanuts used a lot more in cooking and recipes,” says Treadaway. “Boiled peanuts are always popular in the South, and they’re starting to spread out a little bit in other regions of the country as a snack nut,” says Treadaway, who also notes some consumers like to create their own custom-flavoring combinations at home. “Being able to create your own custom seasonings is popular.”

Of course, it’s much easier to sell peanuts when people can easily see them and put them right into their shopping baskets. “With peanuts being an impulse item, visibility is certainly the key, and you have to put peanuts where people can see,” says Williams.

Hartman notes every time of year offers merchandising opportunities. “Peanuts are a very versatile nut,” says Hartman. “Keeping them selling during all times of the year is dependent on continually changing up the approach. Market them as a salad topping early in the year when consumers are thinking health and salads. Market them as a grab-and-go snack for baseball season and the beginning of summer. Merchandise them with picnic suppliers for summer holidays, and snack displays for football season. Keeping peanut merchandising fresh is the key to sales during the slower times of year.”