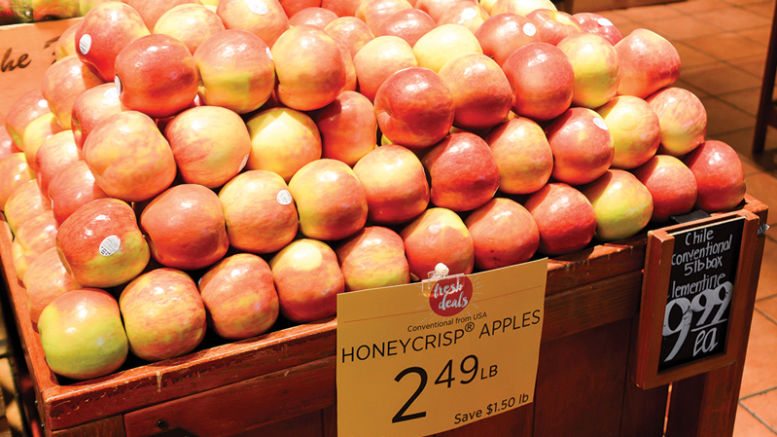 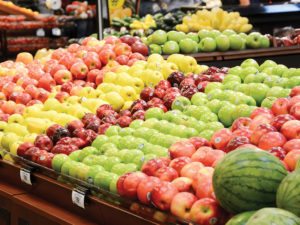 Produce departments are the primary beneficiaries to capitalize on this popular fruit throughout all four seasons. Yet, it’s the fall months that continue to experience the most attention for apples.

“There is certainly buzz around harvest season, and we are happy to see that,” says Wendy Brannen, director, Consumer Health & Public Relations at the U.S. Apple Association, Vienna, VA. “We want consumers to get excited about apples and associate fall with this fruit, whether that means baking apple pies and other goodies, establishing a family tradition of picking apples or just buying more apples to eat as part of a healthful diet.”

Apple varieties are more established. Not only has the total supply increased, but growers and packers are better able to store more types for longer periods.

This is proof that apples are no longer a commodity, as old crops dovetail with new ones.

“We can put apples into storage and have a supply until spring,” says Jim Richardson, vice chairman, partner at Caldwell, ID-based Symms Fruit Ranch.

The New York Apple Association (NYAA) has specific procedures that are followed in CA storage, which includes altering the atmosphere and controlling what inert gasses are in the room and which ones are removed.

“It’s simply a matter of explaining in layman’s terms how controlled atmosphere works, — oxygen in the air we breathe is reduced so the apples keep longer,” says Brannen.

CA rooms are now more technical with computerized equipment. Some growers also utilize an application for apples before picking, which controls the pick time.

“CA storage is more advanced than years ago, and there are better apples and horticulture practices now as an industry,” says Roger Pepperl, Stemilt 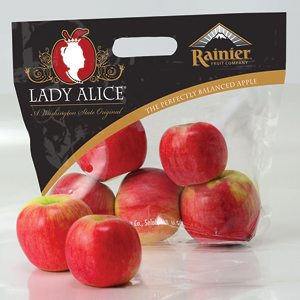 The company uses CA rooms for short periods, which helps slow the amount of oxygen and put apples into hibernation mode. In early winter, Stemilt utilizes mid-term storage, then apples with larger starch reserves are put into long-term storage for late spring/early summer.

“As starches drop off, this gives sugars a chance to create flavors, and these can be better than when the fruit is off the tree,” says Pepperl. “Some of those fruits, like Piñata and Pink Lady, taste really good out of CA, and Fujis get sweeter.”

Many growers utilize smaller CA rooms, which hold 1,500 bins that have 1,800 boxes in each. With this method, it’s easier to break into rooms for fresh products.

“It’s important to work with shippers that have good timing practices,” says Pepperl. “If fruit is picked too late, it will be a problem, so good harvest management is important.”

CA programs don’t have the same meaning as years ago from the standpoint that the majority of apples can utilize these programs.

“CA is a superior way to store fruit, so almost all of our product is being stored this way,” says Steve Lutz, vice president of marketing for CMI Corp., Wenatchee, WA. “What retailers really need is a shift in performance parameters during winter.” Symms Fruit Ranch stores its apples in CA when at the peak of ripeness, which carries the quality over until spring.

“Different shippers have their own models, programs and commodities,” says Symms’ Richardson. “There are only so many boxes of apples a company will pack per day.”

Suppliers contend that apples in CA have the strongest legs and hold up well. Sage Fruit uses CA for most of its apple varieties, but ripeness always is the prime indicator. “It’s more lot specific than variety, so ripeness impacts this the most,” says Chuck Sinks, president, sales and marketing for the Yakima, WA-based company.

Sinks adds that the focus needs to be on apples that help build winter sales. Certain varieties, like Sweet Tango, don’t store well in CA and need to be moved out, with space reallocated.

The opportunity is there to build transaction sizes through proprietary managed varieties, but it’s important to understand that fall apples are local and sold at a lower cost, which reduces transaction amounts.

Experts say retailers should not hype up the CA process, but rather promote the high quality and flavor of apples in winter months. “Consumers don’t care why the apple is crunchy, and telling them apples are stored in a controlled atmosphere often takes away from the eating experience or concerns of handling,” says Jim Allen, president of the New York Apple Association, Victor, NY.

Winter apple sales do slip compared to the mad rush in the fall, but many designate January through March as key apple selling months for retailers.

“Fall sales are always the highest, and when you factor in all of the direct marketing from farm to fork, and farmers markets, the movement is very heavy,” says Allen. “In winter, it slows down and other fruits (such as citrus) pick up.”

The winter months are about increasing apple transaction sizes with CA varieties, including Ambrosia, Kanzi and Kiku.

“Apple sales used to start to fall off in the winter months, but that’s no longer the case with new managed varieties and pack types, pouch types in particular,” says Lutz of CMI. 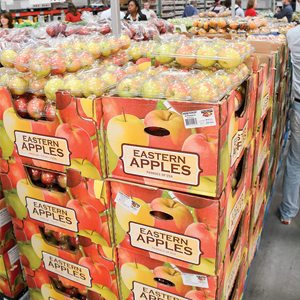 According to various suppliers, many retailers — out of habit — look to promote what they promoted last year during the same week. This is true in any category, but especially in apples. Growing new sales with undeveloped apple varieties can be a challenge if retailers are strictly looking to the past for answers, say experts.“We found plotting a different course and putting effort to bringing the new varietal choices to the consumers hugely pays off,” says Randy Abhold, vice president, sales and marketing at Rainier Fruit Co., Selah, WA. These include promoting Honeycrisp, Pink Lady, Envy, Lady Alice and organic apples.

Some say the apple sales potential is strongest from September through March. “Apples are typically front and center in the produce department during these months, which gives great exposure to this category,” says Abhold.

Eastern apple sales remain steady from early September through January, according to Andy Figart, sales and marketing at Leola, PA-based Hess Bros. Fruit Co. Furthermore, sales begin to slow slightly in February most likely due to the fact these products maintain a very high profile in stores for a five-month stretch.

“In February, consumers start to look for produce that is available out of the Southern Hemisphere,” says Figart. Store flier ads and displays are an effective way to convey the different types of apple varieties available. For the past two years, the Ontario Apple Growers conducted in-store sampling programs in February and March. “We chose this time frame strategically to help bring awareness to the public,” said Kelly Ciceran, general manager of the Ontario Apple Growers, based in Vineland Station, Ontario, Canada.

In terms of merchandising, the 2-pound pouch bags have been taking off — especially in winter. “Looking at every apple variety, the fastest growing packaging is the 2-pounders, and we predict that will continue this year with CA apples,” says Lutz of CMI.

Pricing is lowest during picking season, since harvests periods are simultaneous in Michigan, New York and Washington. Prices tend to climb in mid-November, and the best shipping months are December through April. “This also is when competition with other fruit is minimal,” says Stemilt’s Pepperl.

Rather than serving as a distraction, imported apples are more of a supplement, since there has been an abundance of domestic product in recent years.

“[Imports] generally occur in a counter-cyclical manner relative to domestic apples,” says Mark W. Seetin, director, Regulatory and Industry Affairs for the U.S. Apple Association. “Apple imports occur during the time when the domestic supply falls at the end of the marketing year (typically June through September).”

As a percentage of the total U.S. apple crop — which totaled 272 million bushels in 2014 — imports were at 9.7 million bushels, which represents the equivalent of only 3.5 percent of the U.S. crop.

This proves domestic apples are still in ample supply during the winter months, reducing the necessity for imports. “The Southern Hemisphere doesn’t 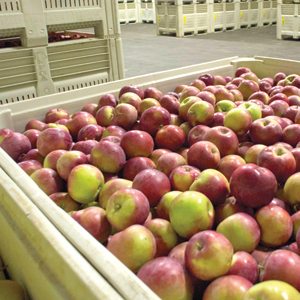 begin harvesting until spring, when domestic supplies are beginning to dwindle, making imports more of a benefit than a threat at this time of transition,” says Abhold of Rainier.

While some imports complement the domestic supply, the fact remains all apples go to storage for a period of time. New York’s supply and price control the amount that is imported.

“Some of the new Import Club Varieties are picking up, but in many cases, this complements our domestic sales by extending the market time,” says NYAA’s Allen.

For example, Honeycrisp from the Southern Hemisphere hits markets as domestic supplies are diminishing. This allows the retailer a constant supply, which only builds the brand and the demand.

CA programs extended apple storage further into the season where the deals could impact some imports, but it depends on the season.

“We’re not in competition with imported apples,” says Sage Fruit’s Sinks. “We will bring more imported apples in this season due to less availability of Washington apples, which were impacted by hot weather.”

This factor decreased the state supply from 140 million to between 108 and 110 million. Competition drives home the importance of harvest management. With the Southern Hemisphere six months behind the U.S. in terms of harvests, there is ample opportunity to ramp up storage in CA programs. Most Southern Hemisphere fruit is grown in either Chile or New Zealand, both of which don’t have big domestic markets.

“We pick Galas in August and sell them in September, so at the end of February/early March, Galas from the Southern Hemisphere are established,” says Pepperl. “Still, our CA supply is strong, so it’s up to the retailer regarding the crop to maintain. The choice is domestic about 90 percent of the time.”