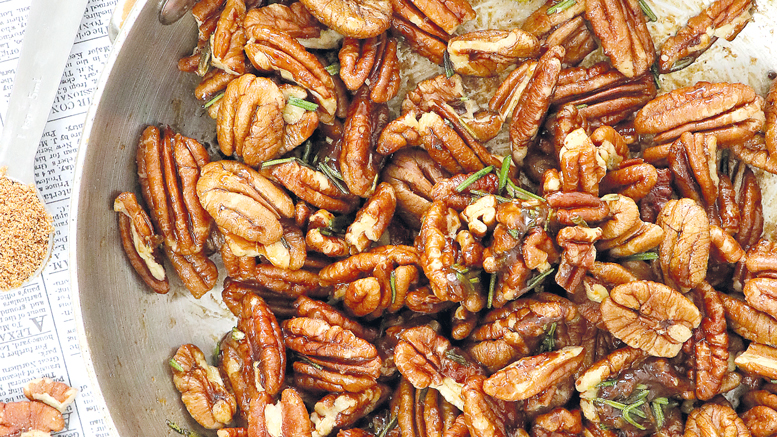 Pecans have a lot going for them — taste, variety, convenience, and nutrition — which more than explains the sales trends.

“Pecans are a big item for the holidays, for Thanksgiving and Christmas time,” says Joey Zuppardo, co-owner of New Orleans area’s Zuppardo’s Family Supermarket in Metairie, LA. “We do well with them. We sell quite a big amount of pecans.”

Demand remains high. “Sales trends are exciting,” declares Will McGehee, founder of the Genuine Georgia Group LLC in Fort Valley, GA. “The pecan was always sold as a ‘baking nut,’ but consumers are starting to identify the amazing flavor of the pecan for snacking purposes.” This shift in consumer perception is leading, he believes, to an increase in display activity and sales.

“Cross-merchandising with high-volume items such as apples in the fall and sweet potatoes during the holidays is a wonderful way to merchandise pecans without giving up floor space.”

For the 52 weeks ending in June, U.S. retail sales for pecans were $55 million in dollar sales, up 3.1% from the previous yearly period and up 4% in volume sales, according to data from San Antonio, TX-based 210 Analytics, LLC. “Pecans are doing extremely well, and have been for several years,” says Anne-Marie Roerink, president. “There is a solid dollar growth for all the snack nuts, with a switch to larger pack sizes. Pecans have the highest growth of all, with gains in dollars, units and volume.”

Taste is a big benefit. “The flavor profile is much better than any of its competing nuts when it comes to snacking or ingredient usage,” observes Daniel Zedan, owner and president of Nature’s Finest Foods, Ltd., based in Batavia, IL, and vice president of Corsicana, TX’s Navarro Pecan Co. “Pecans are also an excellent source of protein. Their versatility, flavor and health benefits complement any diet but are a great addition to a vegetarian diet.”

Pecans are distinguished from many other produce items. “When you put pecans side by side against other items for flavor, pecans really stand out,” says Zedan. “Pecans are also much more versatile. They have a much better shelf life than walnuts.”

Though pecans are available throughout the year, the peak harvesting times are October through February. The leading producing states are Georgia, New Mexico, Texas, Arizona, Oklahoma, Louisiana and California, according to the U.S. Department of Agriculture.

“Pecans are huge sellers in the nut category,” says Paul Rich, vice president of sales for Durham-Ellis Pecan Co., which grows and ships from Comanche, TX.

Fall and winter are not the only times pecans are in abundance. “You will likely find no shortage of America’s native nut at the grocery store throughout the fall and winter season,” says Emma Garner, director of industry relations for the American Pecan Council, based in Fort Worth, TX. “However, many varieties of pecans, as well as shelled and unshelled, can be easily purchased throughout the entire year.”

Like some other fall items, the sales spikes come at a favorable shopping time. “Pecan sales spike during the holidays, mainly because that’s when harvest is,” explains McGehee. “People have it ingrained in their minds that holidays equal pecans. We will always support the huge sales spike in the holidays, but we want to make sure pecans are being seen as an everyday snack that’s healthy for your family.”

Not Only for Holidays

Pecan sales always spike during the holidays, October through January, says Samantha McLeod, executive director of the Georgia Pecan Growers Association in Tifton, GA, “However, we hope to see the trend level out throughout the year with health trends, as we encourage consumers to eat one ounce of pecans a day for a healthy diet,” she says. In fact, consumers’ fascination with healthful eating has led to what McLeod terms a “slight” increase in demand. “Pecans do need a louder voice to reach those dietitians and consumers,” she says. The best sellers remain halves and chopped pecans.

Produce executives should be mindful of promoting pecans beyond the holidays and whenever there is an opportunity to promote snacking occasions. That snacking advantage is in taste. “Pecans have a rich, buttery taste to them,” says Zedan. “They’re not bland, like some other nuts. We have the stores promote the versatility and rich flavor of pecans that you don’t have in walnuts, pecans’ nearest competitor. If you’re going to use with chocolate, the walnut will get the mouth feel but the flavor doesn’t come through. With pecans, the flavor still comes through.”

Value-added stock-keeping units remain a driving factor in the growth of pecans. Cinnamon-coated and roasted/salted have proven to be popular flavors. Genuine Georgia’s brand, Pecan Nation, offers a seasonal Gingerbread flavor that McGehee says sells “like crazy” during the fall and winter months.

Value-added pecans, such as pieces, also spike during the holiday seasons “and mainly only the holidays,” notes McLeod. Aside from that, however, “there is not yet a trend for pecan pieces for the snack food market unless they are blended with a trail mix,” she says. “Health-conscious consumers prefer the raw/natural, or the roasted and slightly salted, or preferably lightly sea-salted,” she says.

Pecan displays should be strategically positioned in produce departments. “The front of the produce department is where pecans should be displayed for optimum sales opportunities,” says Durham-Ellis’ Rich, who recommends displaying bags of pecans in racks, bins and on regular shelves, in shipper displays as well as in mobile pallet modules.

To gain attention, pecans should be placed at the front of the produce department, agrees Zedan of Nature’s Finest. “There are several places they can be displayed in the produce department, particularly when shoppers come into the stores, they should highlight pecans,” he says. Another good strategy is to provide sampling of the roasted and non-roasted pecans. “Many people aren’t familiar with their health benefits,” says Zedan. “The biggest thing is the health benefits of pecans and the nutrients in them.”

End cap displays work well, as do promotion of pecans’ health benefits, especially in the fall and winter. “Pecans are not only a holiday nut,” says Zedan. “Start stressing health benefits, particularly when people are making health resolutions at the start of the year. While being heart-healthy, pecans give you a full feeling quickly. Not only will you want to eat less, because you’re eating better, this healthy nut satiates your appetite much quicker. They help minimize the chance that you will want to eat something else.”

Zuppardo’s Family Supermarket likes to erect significant displays inside the produce department. “We merchandise them in big displays around the holidays,” says Zuppardo, who adds that his store may sell more than 100 cases of pecans in a week.

Pecan merchandising doesn’t require additional shelf space. “Cross-merchandising with high-volume items such as apples in the fall and sweet potatoes during the holidays is a wonderful way to merchandise pecans without giving up floor space,” says McGehee. To encourage sales, produce executives should use photos to highlight some of the dishes the nut accompanies. Pecans should be placed adjacent to squash and in the vicinity of sweet potatoes.

A handful of pecans — about 19 halves — is a good source of fiber, thiamin and zinc, and an excellent source of copper and manganese — a mineral that’s essential for metabolism and bone health, according to the American Pecan Council. Each 1-ounce serving provides 12 grams of “good” monounsaturated fat, with zero cholesterol or sodium. Compared to other nuts, pecans are among the lowest in carbs (4 grams) and highest in dietary fiber (3 grams) per serving, according to the council.

“The American Pecan Council is focused on breaking pecans out of the pie shell and educating consumers on the health, taste, nutrition, and heritage of America’s Original Supernut,” says Garner. “They might be small, but American pecans are mighty — and have a lot to boast about.”

Research conducted over the past decade has shown pecans can be a healthy addition to anyone’s diet. Clinical studies cited by the Atlanta, GA-based National Pecan Shellers Association show pecans may help prevent heart disease and gallstones, aid in weight loss and support prostate health. Pecans are also loaded with antioxidants and more than 19 vitamins and minerals.

“The pecan is a complex whole food, packed with multiple health-promoting nutrients and bioactive compounds,” says Emma Garner of the American Pecan Council. “Each delicious pecan is a nutrition powerhouse. You’ve most likely seen pecans as an indulgent baking ingredient. However, pecans offer loads of nutritional benefits, and their naturally sweet and buttery taste makes for a healthy snack as well.”

Millennials, health-conscious mothers and the elderly are among the biggest consumers of pecans. For that reason, Will McGehee of Genuine Georgia recommends retailers highlight the health benefits of the pecan, and present it as a snacking alternative to unhealthy, carb-loaded and sugary snacks. High-protein, low-carb diets are here to stay, says McGehee. “Pecans are best-in-class for delivering these two dietary staples,” he says.