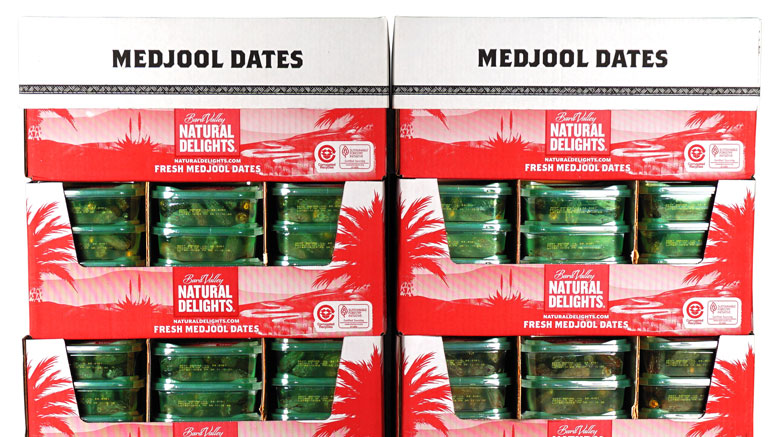 Dates may be mankind’s oldest cultivated fruit, thought to have been farmed as early as 8,000 years ago, according to information from the California Date Administrative Committee, in Indio, CA. Fast-forward, dates were first grown in California in the late 19th century after the USDA brought in offshoots from the Middle East. Today, Americans consume nearly a half-pound (0.42) of dates annually, up 100% versus a decade ago, according to the USDA’s Economic Research Service’s Fruit and Tree Nut Yearbook 2020, with about one-third (34.1%) of this consumption from imports and the rest from domestic production.

“Dates are a good incremental sales opportunity in the produce department,” says Jason Kazmirski, retail specialist for Charlie’s Produce, in Seattle, WA, which supplies several independent retailers in the Pacific Northwest as well as larger chains such as Fred Meyer and Sprouts. “This is especially true as there becomes greater volume and variety as well as year-round opportunities to sell.”

U.S. dates are grown in California’s Coachella Valley and the Bard Valley, located in California close to Arizona and Mexico. The annual date harvest happens each fall, from September through November. The fruit, of which Medjool and Deglet Noor are the two chief cultivars, is then processed and packed to order for year-round availability.

“Medjool dates are high in moisture and classified as a fresh fruit,” says Neil Merritt, director of North American sales for the Yuma, AZ-headquartered Bard Valley Date Growers (BVDG), which sells its dates under the Natural Delights brand. “Ninety-five% of the time, they are sold in the produce department.”

Demand for dates continues an upward trajectory, according to Ben Antongiovanni, president of Pure Palm Produce, in Bakersfield, CA. “We have seen double-digit growth for the past few years and see that trend continuing. Our Medjool Dates have seen the most significant increase, but all varieties are performing well.”

“We have seen double-digit growth for the past few years and see that trend continuing. Our Medjool Dates have seen the most significant increase, but all varieties are performing well.”

There’s been a big shift in demand for organic dates over the past 4 to 5 years, according to DJ Ryan, sales and operations manager for Sun Date, LLC, in Coachella, CA. “About 75% of the Medjool dates we grow are organic, although all are not necessarily sold that way.”

Spring and Fall seem to be our biggest selling seasons for fresh and packaged dates, says Pyramid Foods’ Hendricks. “Spring seems to be more of a fresh date eating experience tie in with religious holidays, and the Fall seems to be more cooking-related or gift-centered with the varieties that are candied etc., at least in our stores.”

“The first large spike of the year is the New Year and consumers looking for healthful-eating options. Young active consumers look for the energy boost from the good source of sugar in dates. Dates also contain potassium that’s good for muscles after a workout. These consumers put dates in smoothies, in salads and eat them on the go,” Merritt explains.

Products such as Date Coconut Rolls and Date Almond Rolls aren’t new, but are seeing continued growth, says Pure Palm Produce’s Antongiovanni. “Both items contain only two ingredients and are packed full of vitamins and minerals. The long shelf life and great taste make them a great on-the-go snack and substitute for energy bars.”

In the spring, dates are a favorite in baking and for making appetizers such as coconut date rolls for Easter. However, growing more important is promoting dates for the month-long Muslim religious observation of Ramadan, where it is a tradition to fast from sunrise to sunset and break each evening’s fast by eating a date. Plus, Medjool dates are one of the easiest and most common gifts given during Ramadan.

According to sales data, as provided by BVDG, there is a retail sales volume spike of 57% for Medjool dates during this time, according to a baseline study commissioned by BVDG from IRI/FUSION, for the 52-weeks ending September 27, 2020.

This year, Ramadan is observed from April 13 to May 12.

“Retailers are encouraged to begin building inventory on dates to capture sales during this high-volume consumption period. Then, April 1st is the ideal time for retailers to start merchandising, promoting and marketing Medjool dates to maximize sales for the Ramadan holiday,” says BVDG’s Merritt.

He adds that it’s important for retailers to know the 2-pound package drives category volume growth during the second quarter, which coincides with the Ramadan holiday, according to the marketer’s recent IRI/FUSION data. The study indicated that the 2-pound package was up +18% versus the prior year.

Date sales spike again for the Thanksgiving and Christmas holidays for use in baked bars, cookies and breads, as well as in appetizers such as bacon-wrapped dates stuffed with goat cheese. Last June, the BVDG introduced its new Dark Chocolate Covered Medjool Dates with Sea Salt in 8- and 16-count premium packs with a die-cut window that showcases the fruit inside. It’s an ideal product to promote for gift-giving during the fall holidays.

“We used to sell dates in 11-pound boxes where shoppers used tongs to grab the amount they wanted, but it’s all packaged product for us today,” says Marc Goldman, produce director at Morton Williams Supermarkets, a 16-store chain based in Bronx, NY. “We sell dates in a display with other dried fruits and nuts. It’s a good item for us.”

At Pyramid Foods, Hendricks offers fresh dates in both the retailer’s Natural Bulk sections and on tropicals displays tied into the main banana display in the produce department. Hendricks explains that both bananas and dates are tropicals. Since bananas are such a staple purchase, this helps increase the visibility of dates, and in recipes like smoothies, both bananas and dates are popular ingredients.

Visibility is crucial for an item like dates, with only 8% household penetration, according to the BVDG-commissioned Date Shopper Segmentation Consumer Network in 2019, based on IRI/Freshlook data.

“The biggest challenge in selling more dates is that this fruit is a small category in a category manager’s world. Small, but mighty, because they have a 12-month shelf life and retail for $5.99 to $9.99 per pound, so they can be a gold mine given enough shelf and floor space,” says Merritt.

The category development index for dates is highest in the Northeast at 116%, according to BVDG’s 2019 segmentation research. Next is the Southeast at 110%, followed by California at 106% and then the West, from Denver to the coast, at 105%.

Meanwhile, the 2019 BVDG data shows there are two main core consumers of dates. The first is the Loyalist, who is age 55-plus, buys dates on 5.5 shopping trips each year and purchases 65% of dates annually. The second is the Climber, who is between the ages of 25 to 44, puts dates in his or her basket twice in 12 months and buys 26% of dates annually.

Free-standing shippers, both in and out of the produce department, are an ideal way to add display space for dates.

“Our supplier promotes [dates] several times a year in shippers that can be moved around the store to hit the best traffic areas for the turning product,” says Pyramid Foods’ Hendricks. “It’s not that they will not sell in fixed sets, but they are just not on everyone’s weekly shopping list and are often an impulse item in many of our rural locations. Shippers placed in high traffic areas seem to be the next best way to get them noticed and purchased. We have placed the shippers in places like the cereal aisle, snack aisle, candy aisle, anywhere folks are looking for something to snack on but may not think of dates as an option.”

Whether on a shelf or in a shipper, don’t forget to feature a variety of date products and give them enough space, recommends Sun Date’s Ryan. “After all, dates are a high-value item, with a good shelf life, low shrink and retailers can count on them for consistent rings and profits.”