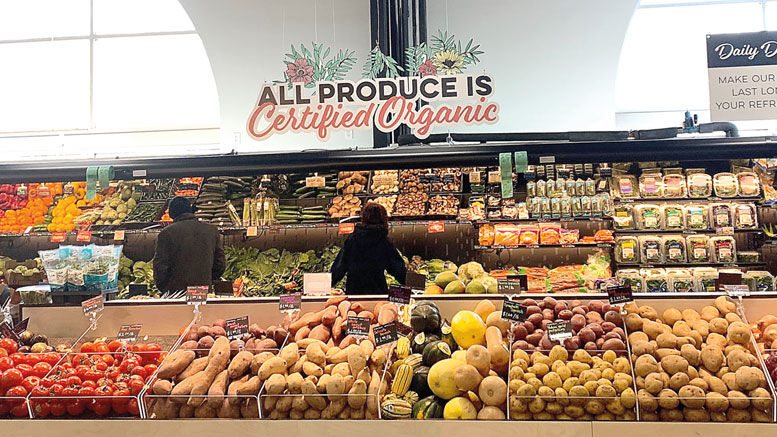 Launched from the garage of Scott Nash’s mother’s house, the 21-store chain now makes its mark in New York State.

MOM’s Organic Market opened its first store in New York State on February 19 with a unique approach to produce and a commitment to natural, organic and sustainable lifestyles.

The store, located in the New York City suburb of Dobbs Ferry at an exit of the key Bronx River Parkway thoroughfare, is committed to offering the highest quality certified organic produce, which it positions right inside the store entrance in a space that is, well, relatively small. That’s where the commitment comes in.

The company, headquartered in Rockville, MD, now with 21 stores, started as a delivery service in 1987 that founder and CEO Scott Nash launched from his mother’s garage — hence the company name. The company graduated to retail in 1990. Retail was where he was heading all along, Nash tells Produce Business. Even in the delivery days, Nash’s knack of providing high-quality produce helped his natural- and organic-focused delivery business take off.

Nash actually wants to avoid the large-scale displays he typically sees in supermarkets and other grocers, strongly expressing his anathema to them.

The produce section at the 18,000 square foot MOM’s in Dobbs Ferry clearly has a hands-on sensibility.

On the opening weekend, Viktor Franc, produce manager at MOM’s Dobbs Ferry, says that the produce section is continually refreshed all day long. Deliveries arrive daily to maintain freshness, he says, and workers are trained to cull out inferior product, although he registered no complaints about his key produce suppliers Four Seasons, Ephrata, PA, and UNFI/Albert’s Organics, Providence, RI, delivering out of New Jersey. The company also buys direct from farms in Lancaster County, PA.

Jon Steffy, vice president and general manager of Four Seasons Produce, says the company had been supplying MOM’s since it consisted of four stores, with Washington D.C. a focal point. He expressed admiration for how the stores merchandise and maintain their produce departments and the effective way they use staffers to constantly and effectively refresh the displays.

The Four Seasons relationship with MOM’s has grown as it added stores and extended its operations geographically through sustained communications and developing routes to supply the company with organic produce daily. “They post on the department wall that they get produce seven days a week, so we know we have to deliver for them,” Steffy says.

To keep things interesting within the context of the store’s produce department, fruit and vegetable displays vary with the season. So, in winter, that store will carry about 10 different varieties of apples at any given time and, in the summer, 10 different varieties of stone fruit, but always in the everyday merchandising context of the department.

Nash actually wants to avoid the large-scale displays he typically sees in supermarkets and other grocers, strongly expressing his anathema to them. Even though MOM’s does shift the product selection with the seasons, which would be the case no matter what as organic consumers often prefer to purchase fruits and vegetables at harvest, the store doesn’t establish big displays of newly harvested product, letting the selection speak for itself.

Nash actually wants to avoid the large-scale displays he typically sees in supermarkets and other grocers, strongly expressing his anathema to them.

“We always have enough,” he says. “We have a good selection, and we keep it stocked all day. Really, the customer works the product for us. Twenty percent of our sales is in produce.”

Although the table display of fruits and vegetables is prominent, the wall coolers featuring temperature-control products are critical, Nash notes. Greens are an important part of the produce business at MOM’s and, so, get a greater proportion of wet cooler space than might, say, baby carrots relative to how other grocers operate. That being said, the display, which incorporates a strong range of products from kale to bok choy, isn’t overwhelming in scope, consistent with the produce department strategy to keep things neat and maintain freshness.

“Greens are our focus,” Nash says. “But if you put up too much, it gets old and dehydrated.

MOM’s combines a commitment to sustainable lifestyles and operations that support them with a sophisticated approach to merchandising that makes shopping an airy, easy to navigate shopping experience, with high ceilings and 10-foot-wide aisles. MOM’s also makes an extra effort to maintain relatively low price points, making a statement against a whole paycheck shopping trip. Nash says the company’s focus on organics and the store footprint give it a chance to provide a good range of selection across the store. He notes that pricing is based on giving consistent value customers can recognize.

“We don’t really do gimmicks for pricing,” Nash says. “We don’t give away money, but we have a low-price guarantee.”

“People don’t go from Cokes and Doritos to kombucha and kale overnight.”

Beyond encouraging people to get into organic gardening, MOM’s Dobbs Ferry has an extensive assortment of bring-your-own-container bulk offerings in food and non-food aisles, including an expansive health and wellness section. It even minimized bagged and tub items in the produce department, although there is a bit of each, with salads being the most conspicuous example.

“Our purpose is to protect and restore the environment,” says Dobbs Ferry store manager Danielle Adams. “We put our money where our mouth is. We really do our best to help out, do cleanups, donate, give back. We have 100% organic produce. We have 140 banned ingredients, so as a company there is a lot of stuff we will not sell. You can contact our CEO any time. His phone number is on the bag. It’s a great place.”

Produce is a key differentiating point for MOM’s. Variety across the store with the commitment to organic under which it operates is important as well.

In an interesting perspective, Nash says he appreciates stores such as Trader Joe’s and, particularly, Whole Foods, that have conspicuous organic presentations, even if they aren’t in the same proportions in the two stores. The shoppers in his stores are different and have a perspective that has evolved to more actively support issues such as sustainability, which is one reason why MOM’s is so heavily focused on organics, including 100% organic produce.

“It’s funny,” Nash says. “I am thankful for Whole Foods and have been over the years. They have disrupted the grocery industry. Whole Foods kind of incubates our customers for us. It exposes people to organic brands and products. It’s a journey. People don’t go from Cokes and Doritos to kombucha and kale overnight. Whole Foods is a stepping stone. We’re more dedicated to organics.” 